Good day. Welcome to the DRWakefield Fortnightly Market Report. This fortnight we’re covering the period Monday 16th May to Friday 27th May. 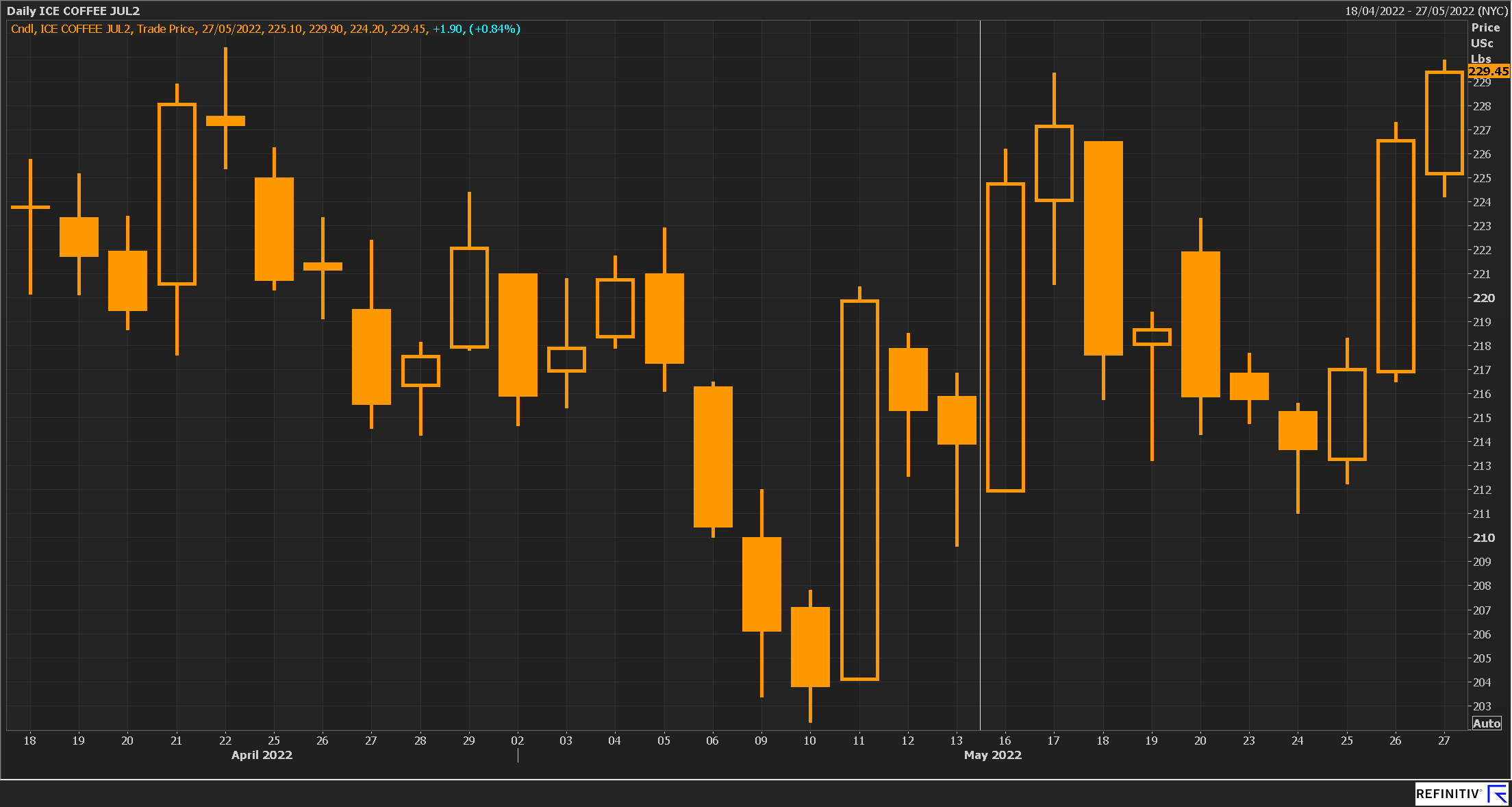 Monday 16th May opened trading at 211.90 c/lb and the only way was up thereafter. It was not quite the 16.40 c/lb frost-induced daily trading range of Wednesday 11th of May, but it was a sizeable 14.30 c/lb and we closed the day out at 224.80 c/lb. The price action was driven by the specs who were very active in padding out their Net Long Position. The next day saw the market try and test the 230 c/lb level, but it could not make it and on Wednesday we saw a big sell-off and another large daily range of 10.75 c/lb. Friday 20th closed at 215.85 c/lb, only 3.95 c/lb more than the week’s opening.

Monday 23rd was not as volatile as the previous Monday and enjoyed a quiet day’s trading. The market fell to a fortnightly low of 213.85 c/lb on Tuesday but did regain nearly 5 c/lb on Wednesday and on Thursday climbed 9.75 c/lb higher than how it opened to close at 226.60 c/lb. This surge was mainly due to aggressive short covering by speculators but was not met with much commercial or speculative selling and this stymied the momentum of this move. The weaker US Dollar is giving the bulls some hope that we may see this move to the upside continue. Friday’s close was 229.45 c/lb, will we see a move through the 230 c/lb level? If so, this would be significant, looking at many of the technical ranges.

The CFTC’s COT report with the cut-off Tuesday 17th May showed the reversal of the long liquidation and fresh shorting we saw in the previous couple of reports. The Net Long Non-commercial position increased by 7,933 lots to a total of 21,305 overall.

The CFTC’s COT report with the cut-off Tuesday 24th May again reversed the trend of the week prior and, once again, the speculators slashed their Net Long Position by 3,535 lots, totalling 17,770 lots Net Long.

Certified US Arabica stocks have dipped to 1.08 million bags, a level not seen since March. Honduras and Brazil remain the two largest origins by a very large margin. 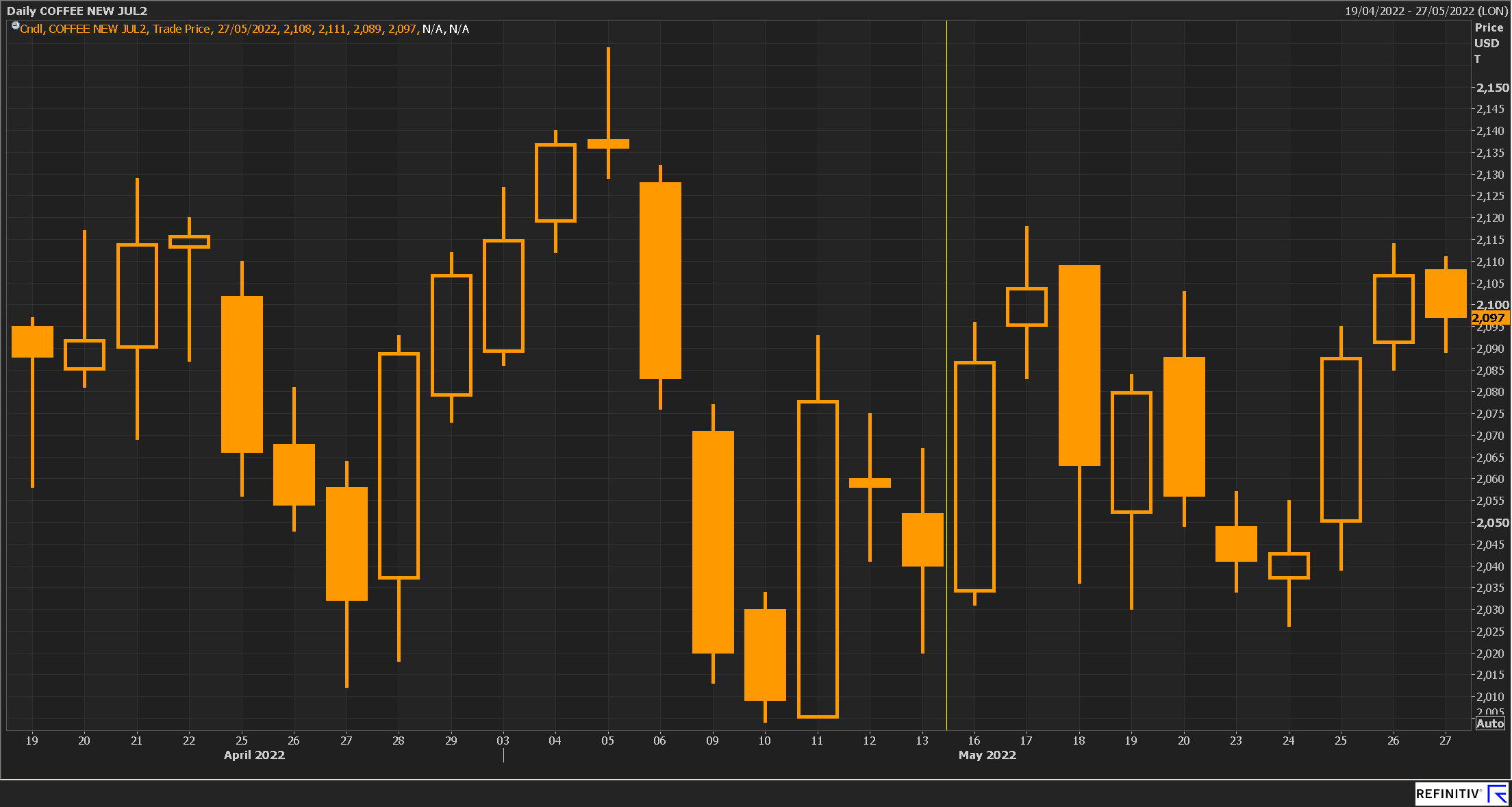 Market participants continue to pay close attention to weather forecasts in Brazil; last summer’s July cold snap remains fresh in the memory. A cold front swept through the coffee belt in May, and this came as a surprise to many as if cold snaps do occur, they tend to happen later in the year. The weather spooked the market, but it did also bring some rain, in quantities to be expected for this time of year. Demand for certified coffees is strong and prices remain high. Prices are expected to be sticky, even with the high New York environment. Shipping coffee out of Brazil has certainly improved since the end of 2021/beginning of 2022. However, challenges do remain: we are seeing bookings continue to get rolled or cancelled, and longer transit times than usual are becoming the new norm. The 2022/23 crop is a little behind schedule and as crop numbers start to trickle in some of the supply uncertainty will follow suit.

Colombia remains the 3rd biggest producer of Arabica in the world and grows nearly 10% of production.  However, this year has been challenging.  The climate has been particularly erratic with continuously sporadic rains that have hampered flowering and have lowered cherry production. On the 11th of May, it was announced that forecasters expect La Nina to occur and this will bring Colombia close to 12.5 million bags instead of the 14 million expected.  The presidential elections on Sunday 29th May have dominated the news and people fear that it has been a divisive campaign, which could bring some political instability. Areas of the south, particularly in Cauca, have become more dangerous of late and there is a real need for a unifying force in power.

Last summer’s weather conditions in Costa Rica were perfect for coffee tree development, and this was followed by rain which arrived at the right time, in the right quantity. After some choppy years where rain has not come when needed and then come all at once, this was welcome news. Flowering has been excellent and the 2022/23 crop is expected to be sizeable. Costa Rica tends to start selling its crop before the other Central American countries and this year is no different with much business occurring in May. Due to the volatility of coffee futures, most exporters and cooperatives are offering on a differential, and these remain quite similar to the differentials of the 2021/22 crop. 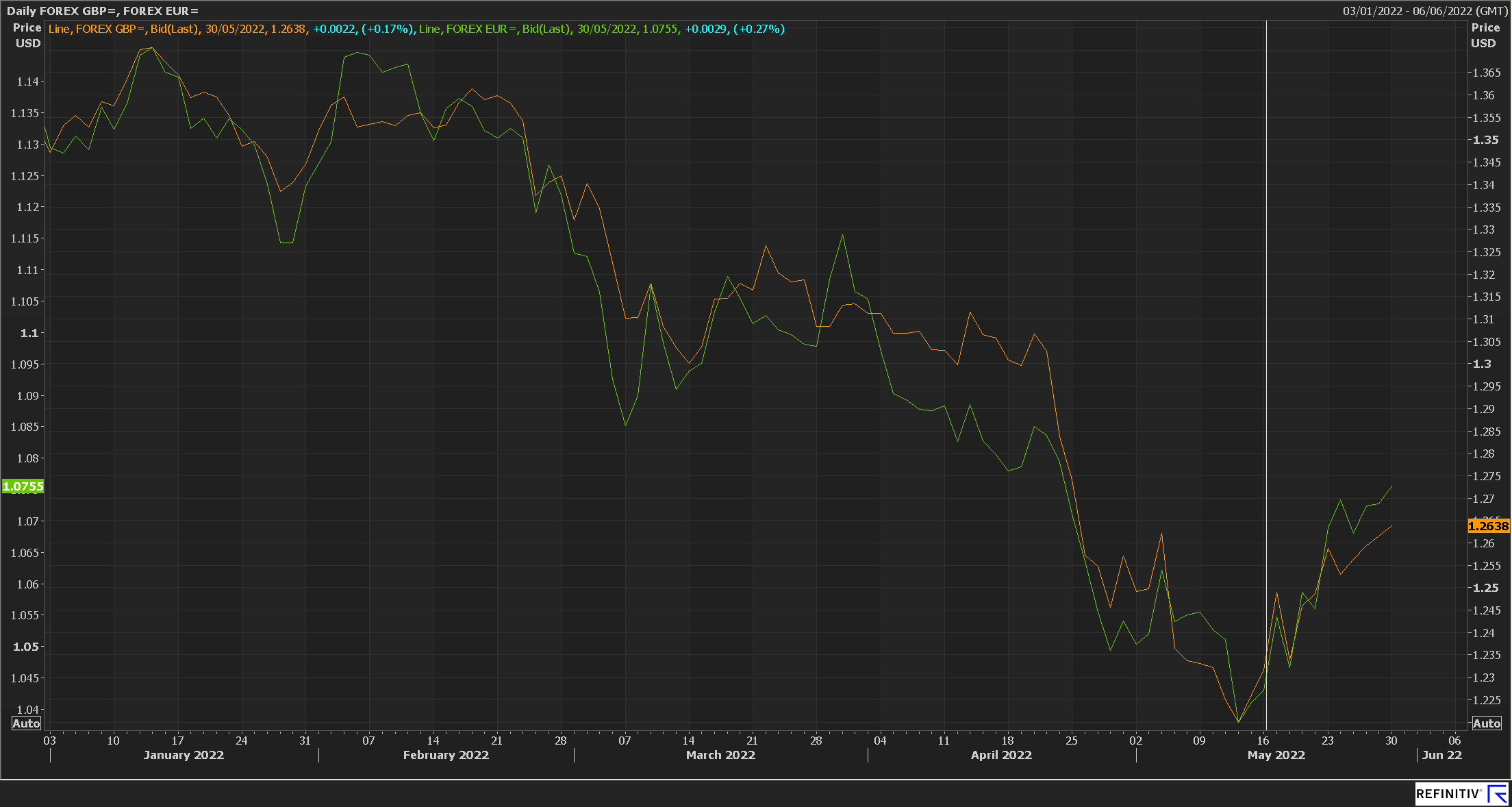 Both the Euro and the Dollar reversed the recent trend of Dollar Strength to move from 1.231 to 1.262 and 1.045 to 1.074 over the past fortnight. On Friday 27th of May, both the Pound and Euro were trading at one-month highs against the Dollar. The Pound was supported by the announcement of a £15bn outlay by Rishi Sunak to tackle the UK’s soaring cost of living.

The release of the Federal Open Market Committee (FOMC) minutes last Wednesday confirmed that Powell and the Federal Reserve Board (FED) do intend to keep up the pace with regard to interest rate rises and that we will continue to see 50bps hikes from future meetings. As interest rates rise, bond prices will fall. What about equities? The S&P 500 index has been teetering on entering a bear market for the last few months and by mid-May had lost 20% of its value since its high in January. Inflation is rampant and asset managers are looking for hedges against inflation. Commodities were a good buy before the big bull run, but are they still? As has been shown in the Commitment of Traders Report for coffee in the last couple of releases, the funds have reduced their net long position and are significantly more bearish than they were 6 months ago. However, if you look at soft commodities and energy as a whole, the trend is still that the funds are long. Could coffee buck that trend? The quantity of this year’s Brazil crop will of course play a big role here.