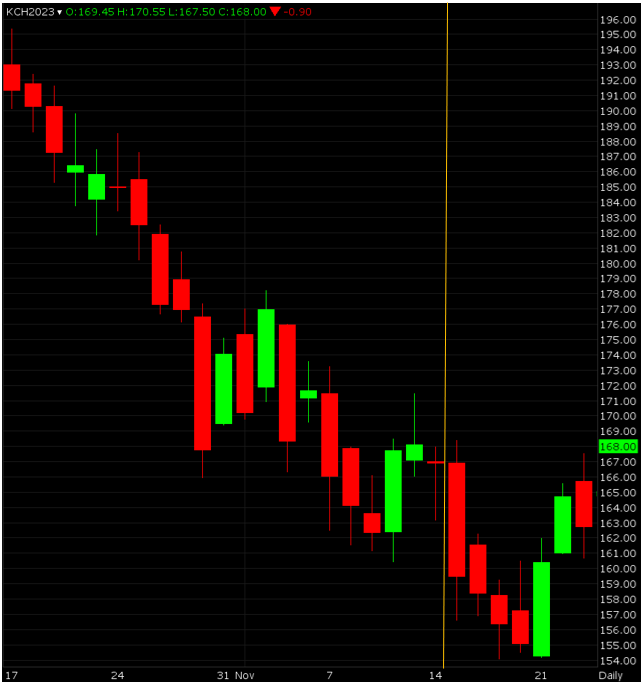 This period we switched from the December-22 terminal month and began working March-23 as the front month.

The market opened on Monday 14th at 167.00 c/Ib and immediately continued its descent from the previous weeks. As the bears dug deeper, some commentators declared that this downward pressure has come too hard and too fast. There is a lot of positive sentiment about the 23/24 crop with the belief that there will be a surplus produced as a result of ideal weather conditions, despite it being the biennial ‘off year’. If you would like to know more about the biennial rhythms of the Brazil crop, you can read a previous DRW article. However, some large Brazilian exporters have expressed their ideas that the crop could be the same size as the 22/23 crop. Nevertheless, the downward pressure continued and, on the 15th, broke through 160.00 c/Ib. The period low hit on the 21st November at 154.15 c/Ib. This downward momentum is also fuelled by large numbers of certified stocks waiting to bolster the stockpile and funds shorting this commodity in the hope of making financial gains.

During the latter half of the period, the NYC was able to scramble upwards again towards its starting position but this was hampered by thanksgiving and the market close on the 24th November. Many US staff also take the Friday off to extend the weekend, so trading volume was decisively low throughout the day. It closed out at 165.15 c/Ib. As more pressure builds on the thought that we are sitting in oversold territory, will we see the teddy bears picnic come to an end before the start of 2023? 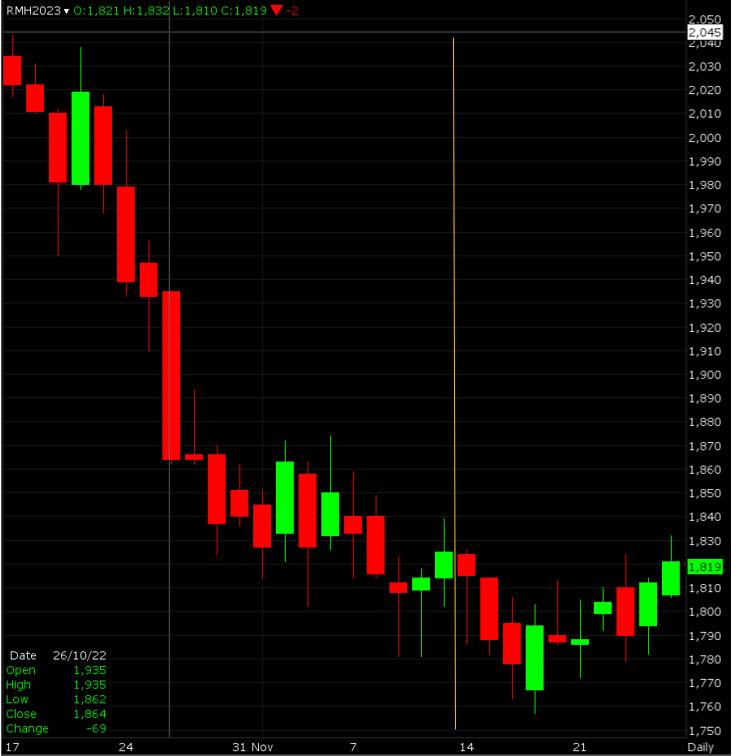 Robusta has been tracking Arabica down over the last couple of months, opening this market report period at 1,835 $/mt. The Vietnam harvest is going steady and the Tet holiday is coming early this year so the selling window is reduced. One worry that persists is that there is very little commercial buying occurring, with the origin having plenty of volume to sell so we could have liquidity vacuums. The Robusta market has been testing new lows below 1,800 $/mt with the bottom of the period happening on the 17th November at 1,769 $/mt. By the end of the session, it had found some strength and closed at 1,818 $/mt. It continued to strengthen until the end of the period and settled at 1,821 $/mt.

Brazilian diffs are remaining strong as a result of low NY C prices, and low liquidity in the domestic market on behalf of the sellers. Brazil has had some recent dry weather which limits growth when the coffee is in the pinhead stage, but the forecast is for rain which will assist the 23/24 crop, aiding the bearish push on prices. November’s exports are set to beat October’s at just over 3.5 million bags. Shipments are continuing, which makes pleasant news due to the threat of strikes and blockades caused by disgruntled Bolsonaro supporters. Work of all kinds is likely to slow during the world cup as many businesses are stopping work during the Brazilian games – they certainly have the right idea!

The USDA’s Foreign Agriculture Service reduced its Colombia 2022/23 crop production forecast by 3.1% to 12.6m bags from a previous prediction of 13m bags which went someway to steer prices upwards. Diffs are still down to 50 c/Ib from 71 c/Ib for Excelso EP earlier in the year as the flow of coffee continues. Recent rain has been problematic for drying and general farm work, but December forecasts are for drier conditions. Despite this, harvest predictions are still said to be an improvement from last year. A weakening of the Colombian Peso encourages producers to sell their main crop, but low NY C conditions prompt some suppliers to hold on to it in the hope of an upward correction.

The harvest has officially begun in most coffee regions in Ethiopia a few weeks ago. Sunny and dry weather conditions mean the harvest looks promising, but with the dramatic drop in NY C over the last couple of months, producers are somewhat discouraged from picking. With the combined increase in cherry prices, this means exporters are also discouraged from buying. Operation costs, like in many other countries around the world, have increased dramatically this year. Material costs (mesh wire for raised beds, plastic cover, jute, etc) have risen in some cases by over 100%, and transport costs (trucks to collect the cherry) are up 44%. Fuel prices have risen over 20% past two months, and inflation is running at over 30%. Naturally, this has caused cherry prices to spike. Some good news did emerge, though and on November 2, the Ethiopian government and the TPLF (Tigray People Liberation Front) signed an agreement to end the two-year civil war which claimed the lives of thousands of Ethiopians.

Both the GB Pound and Euro have been increasing in value against the US Dollar since early November. Rising since 1st November from 1.14 to 1.20 and 0.98 to 1.03 respectively. The first week of the period was a big one for UK data. October inflation was reported at 11.1% vs 10.15% in September, the highest number in over 40 years. The BoE said that efforts to bring this figure under control will likely take 18 months to two years. The UK Autumn statement announced higher taxes for higher earners and increases in ‘stealth taxes’, and a rise in the minimum wage. This did have the effect of subduing recent market turmoil and strengthening the Sterling. On the other side of the pond, increasing consumer debt rates as a result of the hiked interest rates (which do seem to be achieving their primary goal of dropping inflation) are promoting fears of a US recession which is curtailing the strength of the greenback. The DXY is back down to its August 22 levels, and inflation for U.S. manufacturer’s producer price index (PPI) was reported below market expectations at 8% (y-y) vs. 8.5% last month. The Long Dollar is no longer an easy trade as the FX market seems to be anticipating the end of hikes. It is very possible that the US will “only” have an increase of 50 basis points in December, instead of the expected 75 basis points.

Macro is an overall bearish influence on coffee, but continued USD gains are not certain. Despite how much the dollar drops, Arabica coffee can’t seem to find support.