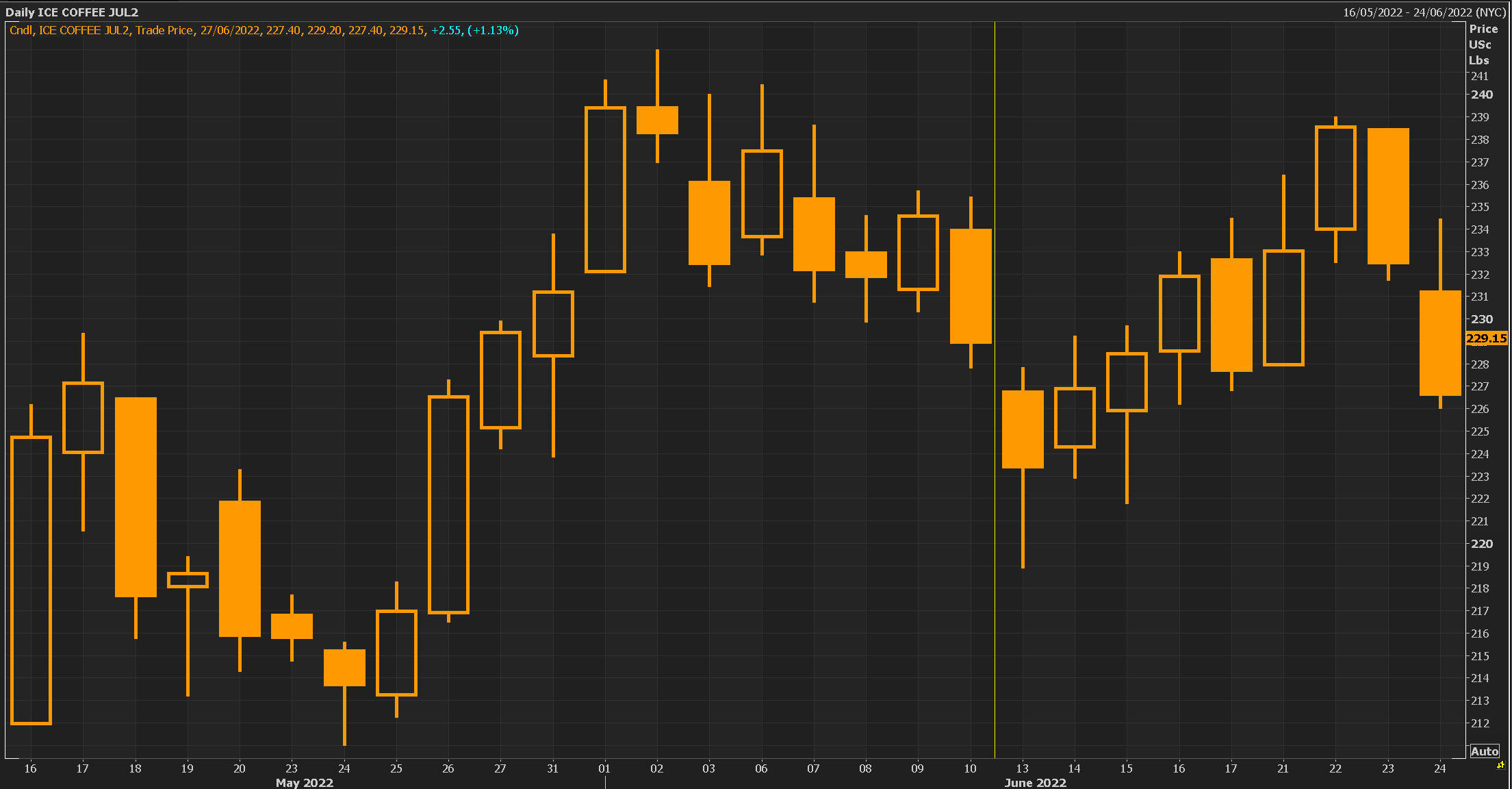 The market opened the period at 226.30 c/Ib on the 13th of June and touched down to the period low of 218.90 c/Ib. It was able to gain some bullish momentum off the back of the crude oil market and gained some ground back to close at 223.25 c/Ib. The ability to hold above 222 c/Ib seemed to provide some comfort and the market continued to rise through the week and in to the next. The value lost on the 17th was caused by the weakening Brazilian Real. The period high on the 22nd was 239.00 c/Ib which was also the First Notice Day for the July terminal. In the final two days Arabica returned all gains made at the beginning of the week. This loss of value is likely to be attributed to recent supply and demand estimates published by StoneX and USDA both upping their production volumes for the 22/23 Brazilian crop. If this holds true, this could see the market come down a significant amount. On the other hand, demand is also expected to increase by 1.1% so may balance it out.

The CFTC’s COT report with the cut-off Tuesday 14st June showed the non-commercial specs take their net long position down a notch to 20,658 lots and the commercials also reduce their net short to -71,465 lots.

The CFTC’s COT report with the cut-off Tuesday 21st June saw the opposite movement from the week before for both the specs and non-comms, as they settled on 23,787 lots and -76,482 lots respectively.

Certified US Arabica stocks took a dip below 1 million bags for second time this year, to 0.96 million. Robusta rose to 1.74 million bags. 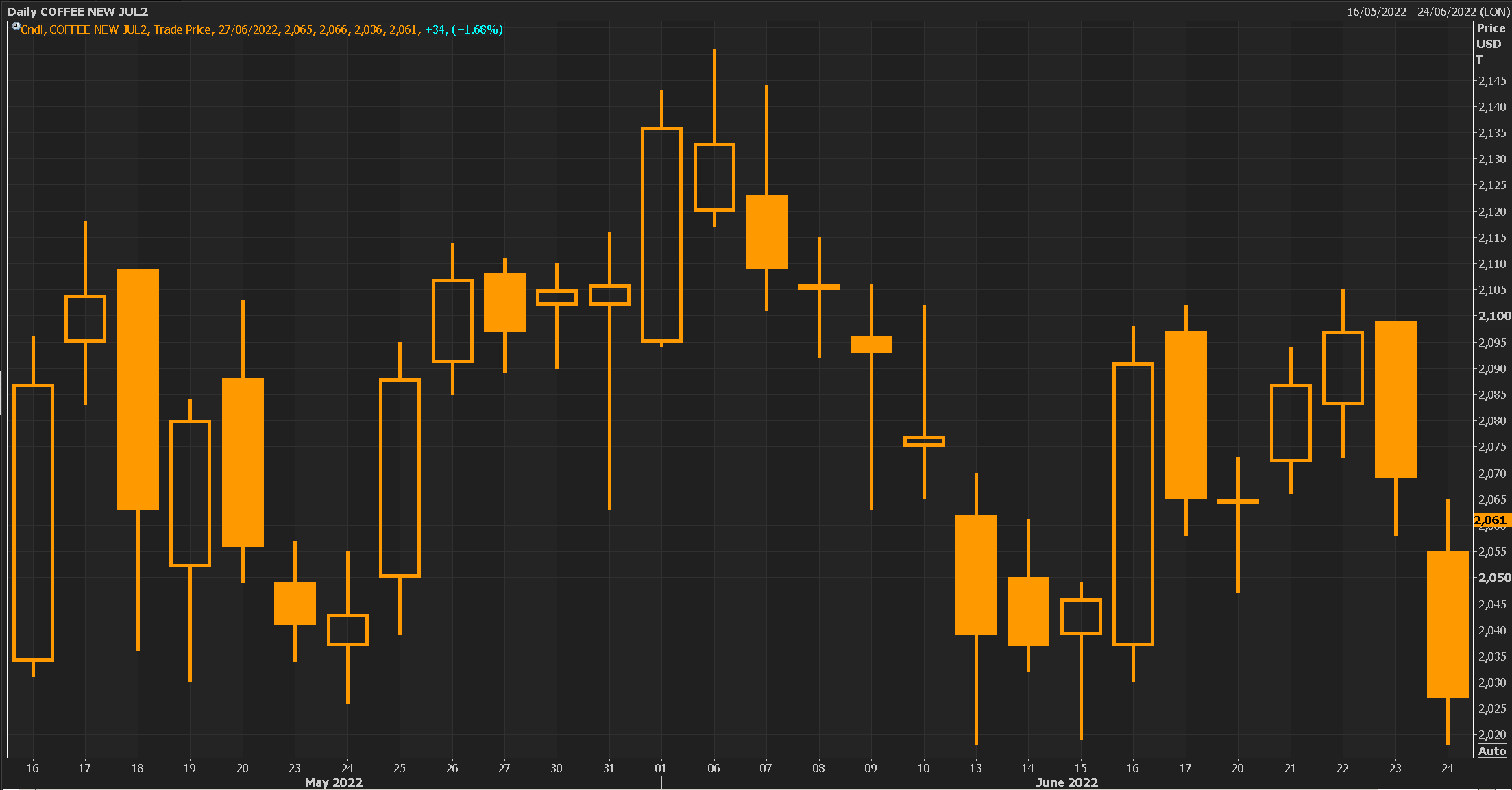 The Robusta market opened at 2,062 $/mt riding on a bearish wave from the start of June. This likely occurred as the spec’s buying momentum dried up, the commercial buyers weren’t comfortable maintaining that price. The 16th saw a large movement from an open of 2,037 $/mt to a close of 2,091 $/mt, very similar to the movement on the 16th of May (although no connection between the two). The rise was following the jump in the Arabica market but dipped on the Friday, leaving the market unsettled as we went into the weekend. Part of this was due to the low number of trades and many people attending the 70th BCA London Coffee Dinner. The following week saw some reclaiming of ground to reach the period high of 2,105 $/mt on the 22nd. By the end of the period this had dropped back down to 2,027 $/mt.

There has been a lot of talk recently about adjustments to countries’ production in the 21/22 cycle and upcoming 22/23, with new figures being published by some of the big players. In Colombia, they have currently harvested 8 million bags which is down 11% YoY. In order to reach the expected level of the USDA – 13 million bags – they would have to harvest above their monthly average every month for the rest of the season. Considering the average so far, it’s likely to finish on 12.7 million bags. Guatemala has also seen an 11% drop YoY.

It’s said that the Brazilian harvest reached 35% by June 21st but is still behind schedule compared to the same period last year due to difficulties with labour. Despite this, the local market in Brazil has physical coffee available, but at high prices. On the FOB front, the demand is low, and the buyer does not show interest in the short term due to high prices. The lack of space on ships is expected to require efforts until the second half of 2023. The availability of containers has improved, but the ships are still with restricted allocations. The ships bound for major ports in Europe and the USA are already short of space until the end of July.

Vietnam on the other hand has had its expected volume increased from 31.1 million bags to 31.6 million bags for the 21/22 crop. Unfortunately, this is not expected to be the case for 22/23, with a fall to 30.9 million bags. This is largely put down to the restrictive use of fertilizers as a result of their increased cost. It’s interesting to note that other Robusta producing states, like Uganda and Indonesia, are expected to increase production in the cycle partly since fertiliser use has always been minimal in these countries anyway. Vietnams diffs are sitting at 70 $/mt, the lowest value for 7 years apart from the last quarter of 2021. 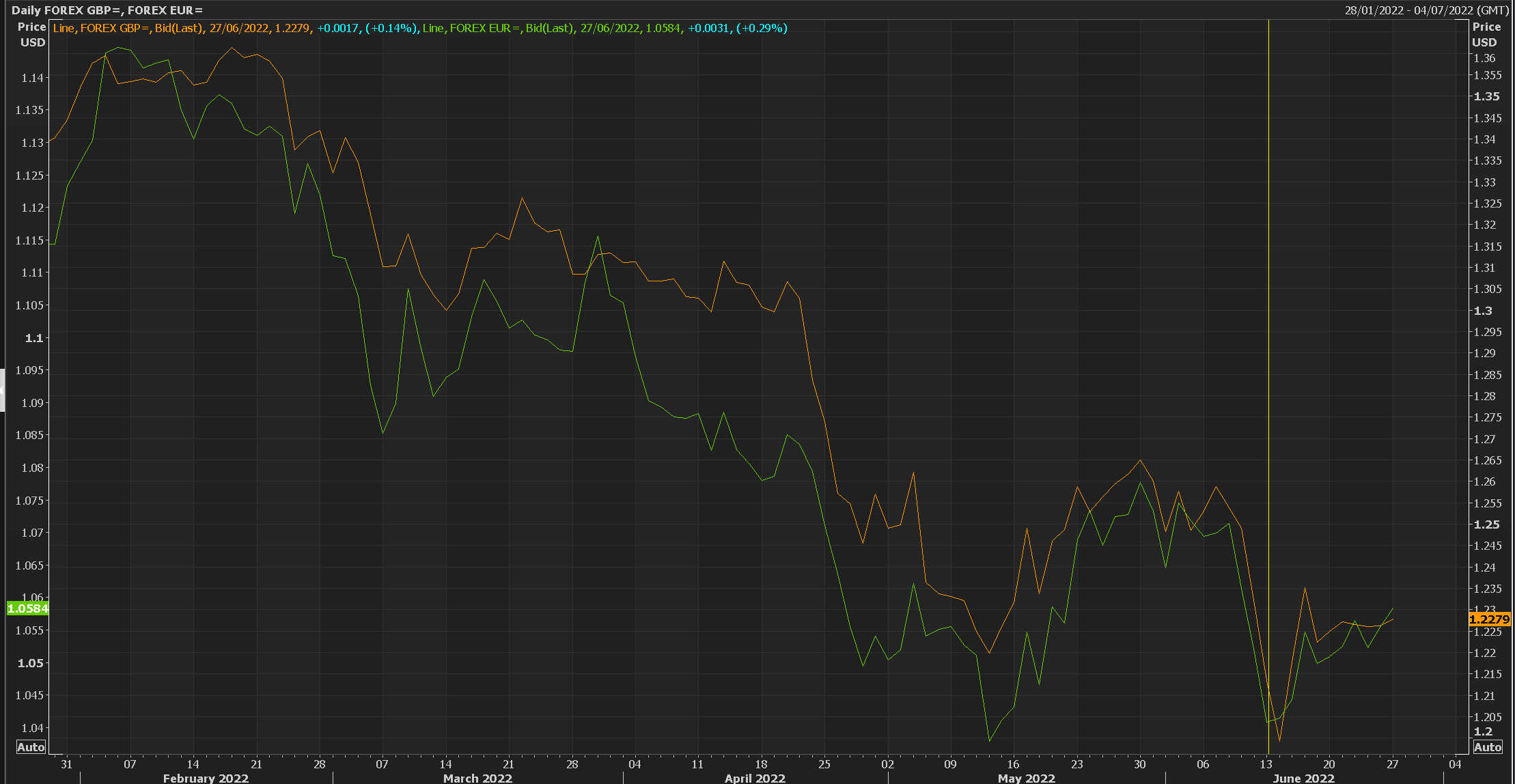 Both the Pound and Euro continued to lose value against the US at the beginning of the week as UK GDP data promoted fears that the UK could be heading for a recession. The Pound began the week at 1.21 and Euro 1.044. The US FED came in with an interest rate hike of 75bps (Basis Points) but soon after the UK countered this with a rise of their own of 25 bps. This helped to bring some backing to the £ and it rallied to 1.235 on the 18th June. The single currency had a similar surge to 1.055. Nevertheless, UK inflation data from the 20th came in at 9.1%, a 40 year high. If this is to remain above 9% it likely indicates an imminent recession. Other factors such as the UK rail strikes also applied downward pressure, but the Sterling was able to ride out the week to finish on 1.227.  The Euro actually continued to rise to the end of the week as markets attitude to risk assets remained relaxed and clocked out at 1.050