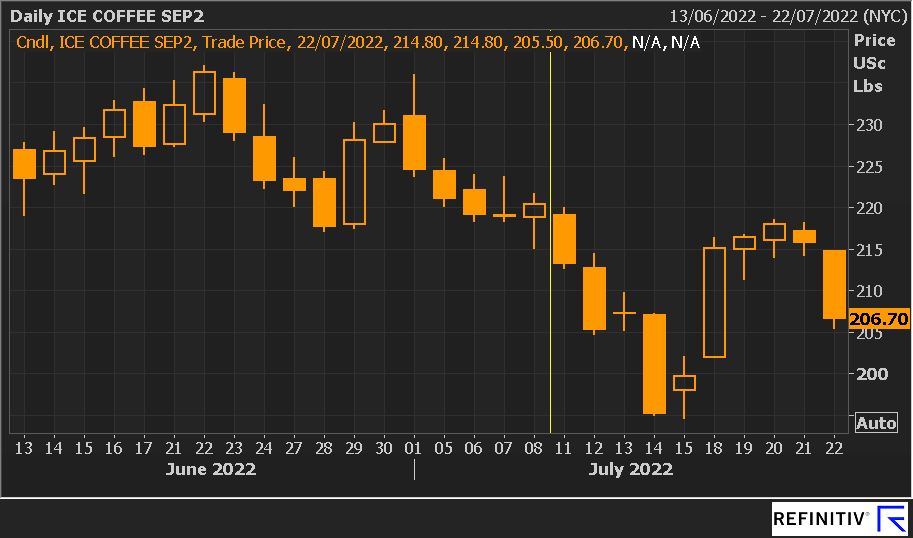 The reporting period kicked off with the market open at 219.20 c/lb on Monday 11th July, off the back of a bearish run which began the previous week. This trend continued with the market falling considerably both Monday and Tuesday, but it was Thursday 14th which saw the biggest trading day with a range of 12.35 c/lb and the market falling below 200 c/lb for the first time since October 2021 and hitting a low of 194.95 c/lb. Friday 15th saw the low of the fortnight, 194.60 c/lb, and the end of this bearish run, closing the week at 199.80 c/lb.

The second week of the fortnight told a very different tale. Monday 18th opened at 202 c/lb and shot upwards, hitting highs of 216.40 c/lb and never falling below the opening. Trading closed at 215.20 c/lb, 13.20 c/lb above the opening. This rally was certainly significant, the likes of which we would normally associate with a weather event, such as the frost in Brazil we saw almost exactly one year ago. However, unusually this rally was not driven by weather at all but rather by the specs covering their short position by buying lots and in doing so pushing the market skyward. Not driven by the fundamentals, this upward movement was short-lived, peaking on Wednesday 20th, but not exceeding the fortnightly high. Thursday 21st saw the tide turn and Friday 22nd saw a large downward trading day. The market opened at its daily high, 214.80 c/lb, and fell to a low of 205.50 c/lb before closing out the fortnight at 206.70 c/lb, 12.50 c/lb lower than the start of the period.

The Arabica market remains in backwardation from the September terminal onwards. Will we see a return to Contango soon?

The CFTC’s COT report with the cut-off Tuesday 19th July showed that the non-commercials reduced their Net Long position by 3,419 lots to a total of 13,524 lots Net Long. This is a continuation of the trend we have been seeing as the non-commercials are continuing to sell, reducing their Net Long position again. This may signal that they expect the market to fall, so they sell off their lots before losing value.

Certified US Arabica stocks have continued to drop and drop, currently they sit at 710,000 bags. Once again certified stocks are hitting historic lows and are substantially below the 10-year average of 2.01 million bags. Typically, certified stocks taper over autumn and winter, bringing the question, will we see drawdowns continue to happen throughout the rest of the year, sending certified stocks even lower?

On a macro level, with governments’ debt and recession almost certainly looming, the specs are generally bearish and selling their long positions across commodities as a whole, not just in coffee. However, at the moment this is counterbalanced by very bullish fundamentals, with very little coffee in main arabica producing countries and high drawdowns of certified stocks. These two opposing forces have made the market a fairly volatile place, volatility that is likely to continue in the short term. 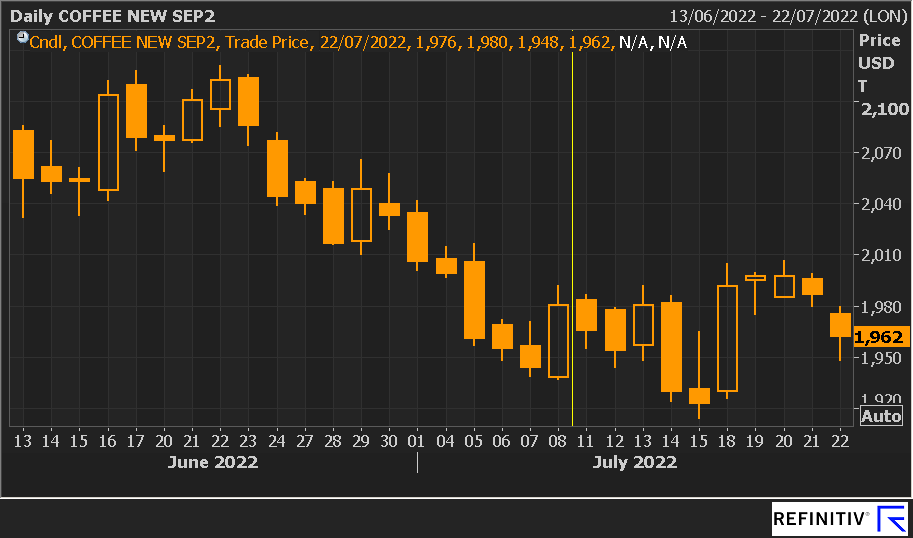 The Robusta market opened at 1,984 $/mt on Monday 11th, and lost value throughout the first week of the fortnight, hitting a low of 1,919 $/mt on Friday 15th. Monday 18th was the biggest trading day, as with the Arabica market, and the rally saw the market rise by 79 $/mt. The rest of the second week of the fortnight followed the same pattern as Arabica and closed out the period at 1,962 $/mt, 22 $/mt lower than the start of the period.

At this time of year, all eyes are on the Brazilian weather forecast. After last year’s frost, which we are still feeling the impact of, we are perhaps more anxious than ever to know whether it may happen again. Thankfully the conditions in Brazil remain dry and are warmer than usual for July, making the current risk of another devasting frost slim at present. This weather is also ideal for harvest and drying the coffee. The recent volatility in the NY was keenly felt in Brazil, with domestic market prices oscillating by 100 BRL this past week. The BRL has continued to weaken against the US Dollar, now sitting at 5.5. Demand for spot and forward coffee remains high, and with certified stocks at historic lows, prices are being pushed up. Currently, FOB differentials for semi-washed Brazils are in the positive figures, where typically they sit below zero!

In Colombia, differentials have continued their upward trend. For Excelso EP, they are sitting around +81 c/lb. For context, this time two years ago differentials for Excelso EP were under +40 c/lb, and so have more than doubled. As Colombian differentials have sharply risen, the Colombian Peso has just as sharply weakened. The Colombian Peso hit its weakest rate against the US Dollar in more than a decade at the start of this reporting period (13th July) reaching 4,625 at the peak of an upward trend that began at the start of June at 3,770. Whilst the rate has corrected slightly to around 4,420, it remains unusually high, rarely has it crossed the 4,000 mark, and those few times it had happened, it was in the last nine months. The sudden increase in devaluation was triggered by the victory of leftist Gustavo Petro in the recent general elections and concerns over what it will mean to have a left-leaning president. It is expected that the COP will continue to weaken as Petro is sworn into office. Potentially this means that we are going to see Colombian differentials continue to rise.

In Vietnam, the differentials are telling a different story. Arabica diffs are sitting at -13 c/lb, right at the low end of the normal range, and very low for the summer months. Typically diffs have been higher between June and September and sometimes pushed into positive figures. Yet, this year they have steadily declined since the start of 2022, making Vietnamese arabica an attractive cost-effective alternative. The new crop will be harvested in September, and ready to export from October, although initial reports are coming in that the crop may be down on last year. When it comes to Robusta the differentials are following the opposite trend. They currently are sitting at +160 $/mt, having shot up from -100 $/mt at the start of this year.  However, they are still relatively low compared to normal, with this time 2 years ago diffs were hitting +300 $/mt. Weather in the central highlands, where a lot of Robusta is grown, is favourable. Long and heavy rains are supporting the crop. 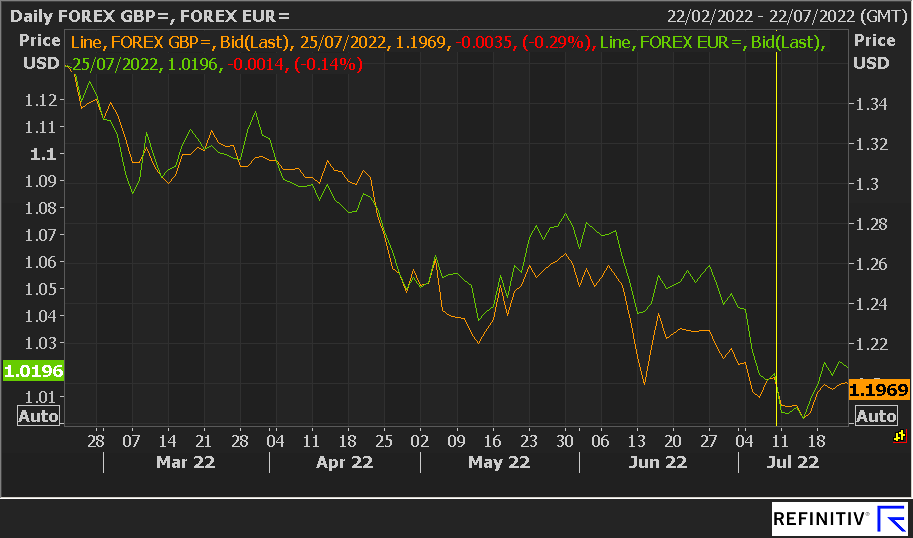 The world was watching and waiting to see if the US Dollar did strengthen to a level stronger than that of the Euro. It did finally happen, but not for long; it was strange to see the value displayed on market screens as it does not seem that long ago that EUR/USD was trading at 1.20. After a brief period of a value of less than 1, the Greenback declined and this sparked a rally in risk-on assets such as equities, Bitcoin and high-yield fixed income securities. This in turn could spark more interest rate rises by the Fed as rising asset prices could push the Fed to raise interest rates even higher in a bid to curb demand and cool down the economy which has been running too hot for too long. Regardless, the expectation is that the Fed will raise interest rates by another 75 basis points this week.

Talking of rates, the European Central Bank finally joined the interest rate hike party, and raised rates by 50 basis points, to 0.0%; it also signalled that it would raise rates again later in the year. The rate has been negative since 2014 in a bid to boost the region’s economy after years of weak growth. However, inflation data for the last 12 months show inflation at 8-10% depending on what indicator you use, and this is far superior to the bank’s 2% target. Currencies will continue to be heavily impacted by central bank rate rises and, although many people think the Fed was very late to increase rates, it is far ahead of the BoE and ECB.

In the UK the next Prime Minister (PM) will be either Rishi Sunak or Liz Truss, after Penny Mordaunt was eliminated from the Conservative party leadership contest. The political uncertainty in the UK has not affected Pound Sterling as much as some people would have thought; much will hinge on the economic agenda of the new PM and how the market sees that playing out. GBP/USD and EUR/USD finished the fortnight at 1.198 and 1.1019 respectively.