Hello and welcome to DRWakefield’s Fortnightly Market Report. This fortnight we’re covering the period Monday 10th of January to Friday 21st of January. 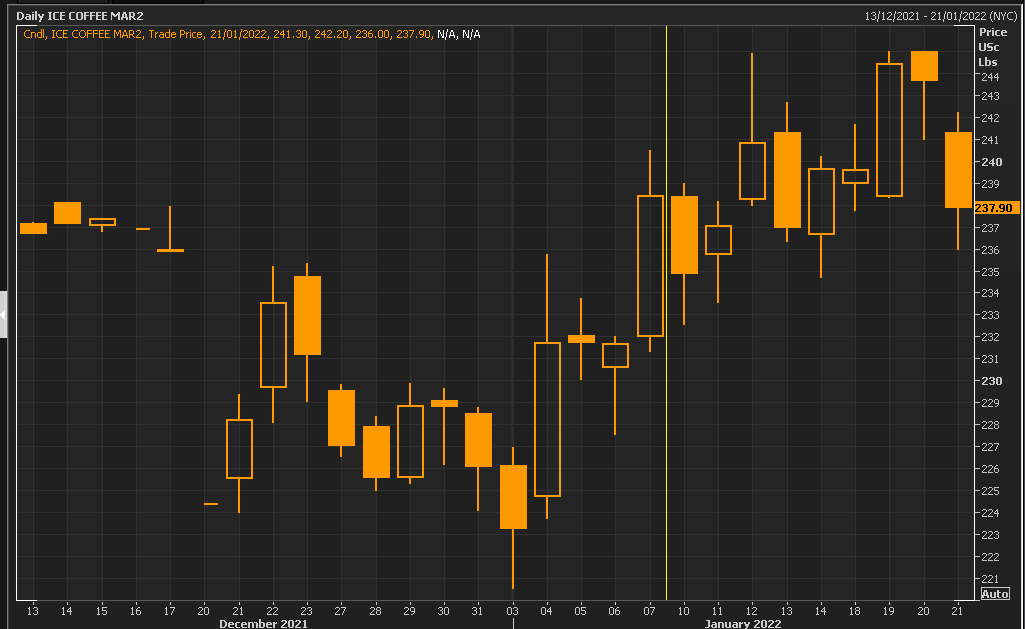 Arabica futures opened on the 10th January at 238.40 c/Ib and started coming off, indicating that perhaps the market thought the previous week’s rise was moving too far from the fair value. The lowest point in the session, 232.55 c/Ib, was seen on the 10th, which also represented the fortnightly low. This wasn’t to last long though, and prices continued a bullish march from the 11th. It must be mentioned that the fortnight saw relatively little movement in real terms, a spread of just under 13 c/Ib. The market appears to be in a period of consolidation as certified draw downs keep pace and no major news about weather events, either good or bad, is putting pressure on the upside or downside. This is demonstrated by the 18th which only saw a daily spread of 3.90 c/Ib and the close was only 0.6 c/Ib higher than open. The final close of the fortnight on the 21st was 237.90 c/Ib.

In the CFTC’s COT report with the cut-off Tuesday 11th January, the non-commercials reverted from their trimming and increased their net long by 4,612 lots to 43,029. Naturally, the commercials extended their net short but only by about half the number of lots to -94,936 lots.

Certified US Arabica stocks now stand at 1.36 million bags, right on the edge of the 5-year minimum. This represents a drop of 150,000 bags from two weeks ago. 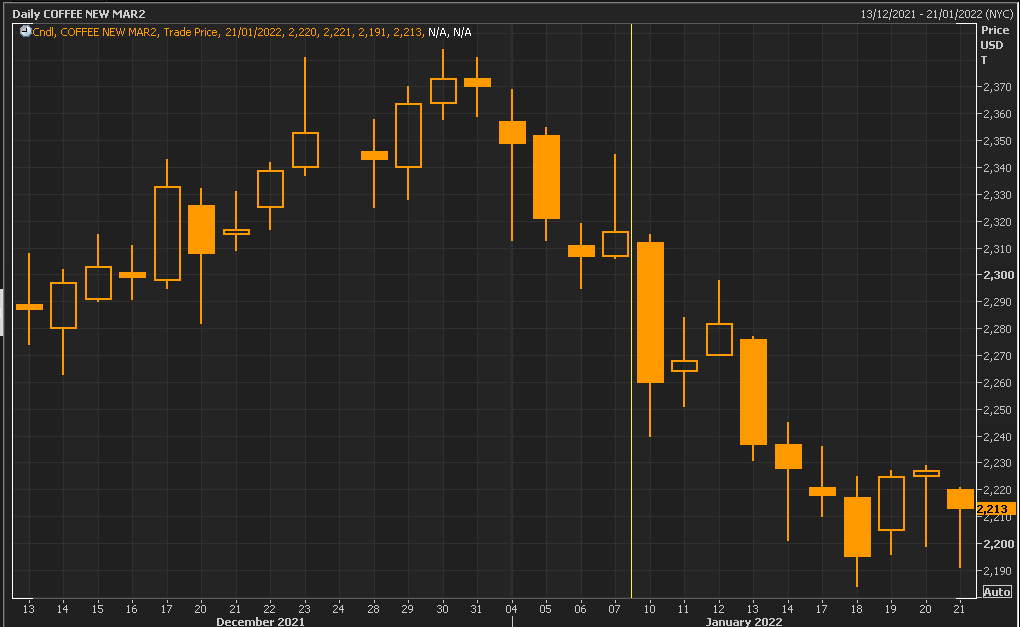 Unlike Arabica, the London Robusta came off at a steady pace over the fortnight. Opening the period at 2,312 $/MT to quickly drop to a low of 2,240 $/MT and closed at 2,260 $/MT by the end of the day. Shipping issues from Vietnam are starting to ease and prices are at a level attractive enough for Vietnamese farmers to sell, especially with the upcoming Tet holiday. This has put some pressure to the downside. The lowest value was seen on the 18th January at 2,184 $/MT. Despite a couple of pull backs the support level found itself settling around the 2,200 $/MT mark. The closing value was 2,213 $/MT.

A key factor determining the coffee price not only in Brazil but on the New York market is the cross between US Dollar and Brazilian Real (BRL). This is down to the fact that Brazil is the largest seller of coffee, and the coffee market is in dollars. A weaker Brazilian currency encourages farmers to sell, as they earn more local currency per kilo of coffee. If the NYC is @ $1 per kg, and $1 is worth 4.00 BRL, a farmer will earn 4.00 BRL for every kg sold. If the NYC is @ $2.50 per kg and $1 is worth 5.50 BRL, it means that for every kg sold a farmer earns 13.75 BRL. At the start of January 2020 one USD was worth 4.06 Brazilian Reias and spent that month climbing higher. In January 2022 it is worth 5.50 Reias, meaning the BRL has weakened. It’s not all easy money though, with interest rates above 9%, any loans demand some attention to be paid off.

Colombia, like much of last year, is still having problems with rainfall. Currently production is down 20% on this time last year. 2021/22 exports are currently below the 5-year low, and are expected to drop to near 10-year lows of below 12 million bags. The mitaca crop could be as much as 6.15 million bags, but heavy rainfall is predicted to continue in some departments causing further issues, especially in Antioquia. Lower crop numbers and lower exports are likely to support high differentials.

Vietnam is approaching the start of the Tet holiday that begins on Monday 1st February, which normally inspires selling. In December, exports hit 2.8 million bags, a whopping 57% increase from December 2020. Overall, the last quarter of 2021 is 20% up on the previous year. As prices continue to rise, differentials continue to drop. Vietnamese Grade 1 is currently sitting at -90. 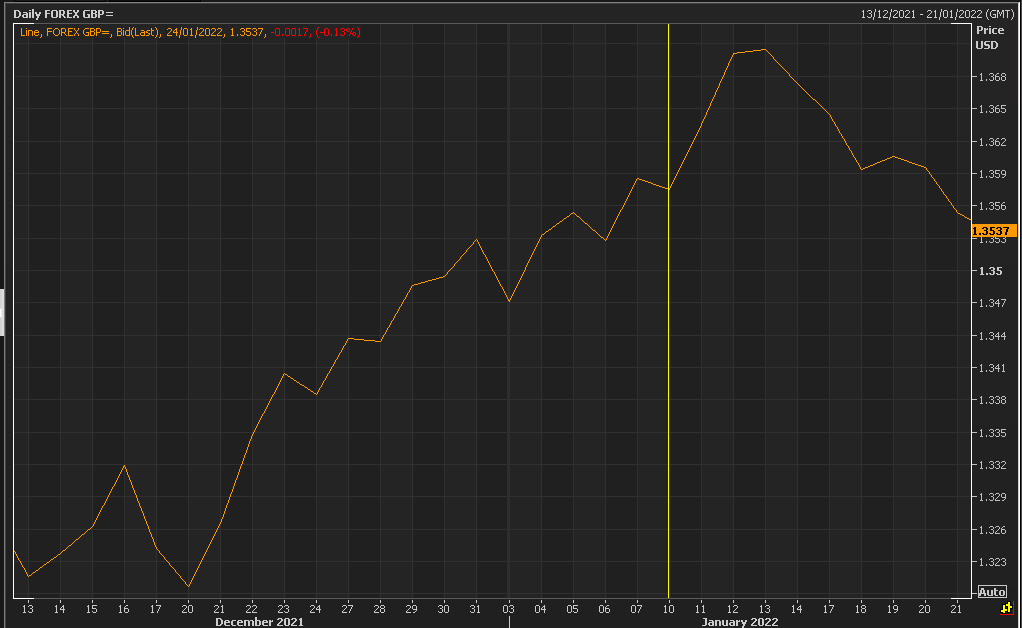 GBP/USD began the week continuing its upward trend. This rally began on the 20th December and continued throughout Christmas and into January. On the 11th January it pipped over $1.36 for the first time in nearly two months, and €1.20 for the first time in almost two years. Strength was gained as Covid fears waned and the lightening of restrictions looked ever more likely. This bullish sentiment ended on the 13th of the month as the UK leadership faced increasing pressure from all areas of society, as more information transpired about Boris’ partying exploits. A fall in value lasted until the 18th when it reached 1.359, and a slight uplift commenced as released inflation figures turned out to be higher than expected. They, in fact, reached a 30 year high. This prompted thoughts that interest rates will be hiked by the BoE next month. This rally didn’t gain much traction and the Pound slid out to end the period at 1.357. 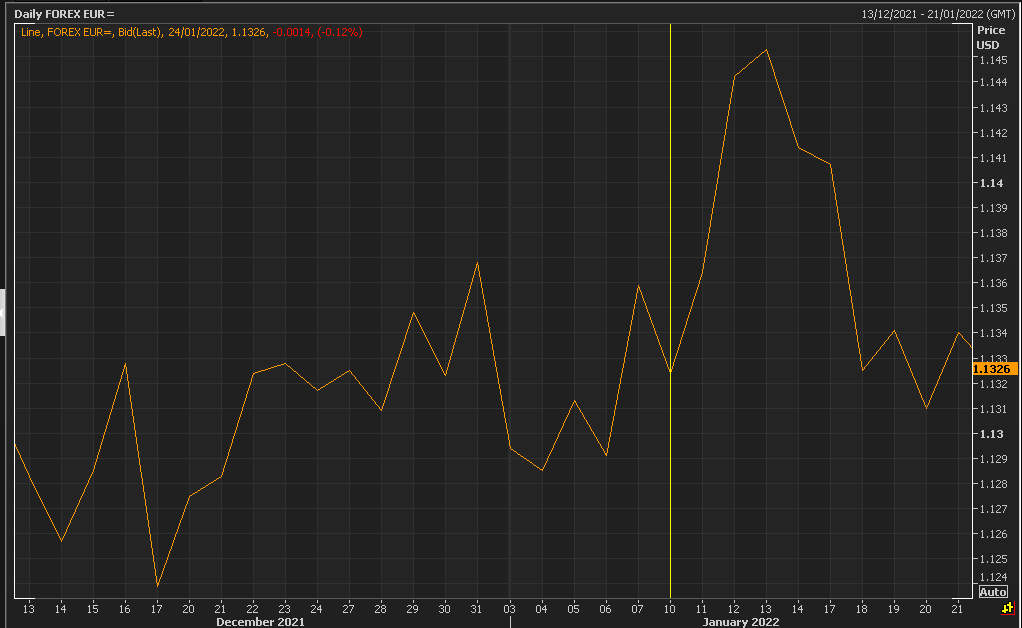 On the 10th of January one euro would buy you 1.1326 Dollars, by the 13th this had changed to 1.1451. Although this looks significant on the graph it must be noted that this only represents a 1.1% increase. The Euro rose in value as much like Sterling, high inflation figures increase the chance of raised interest rates in the pipeline. Dollar weakness also helped to strengthen the EU currency. Value came off the Euro on the 14th as the Greenback gained strength due to rising treasury bond yields and the ol’ familiar promise of interest rate hikes by the central bank. This brought the value to 1.1325 by the 18th and, after a couple of bumps, settled out at 1.1335, very close to its opening value. 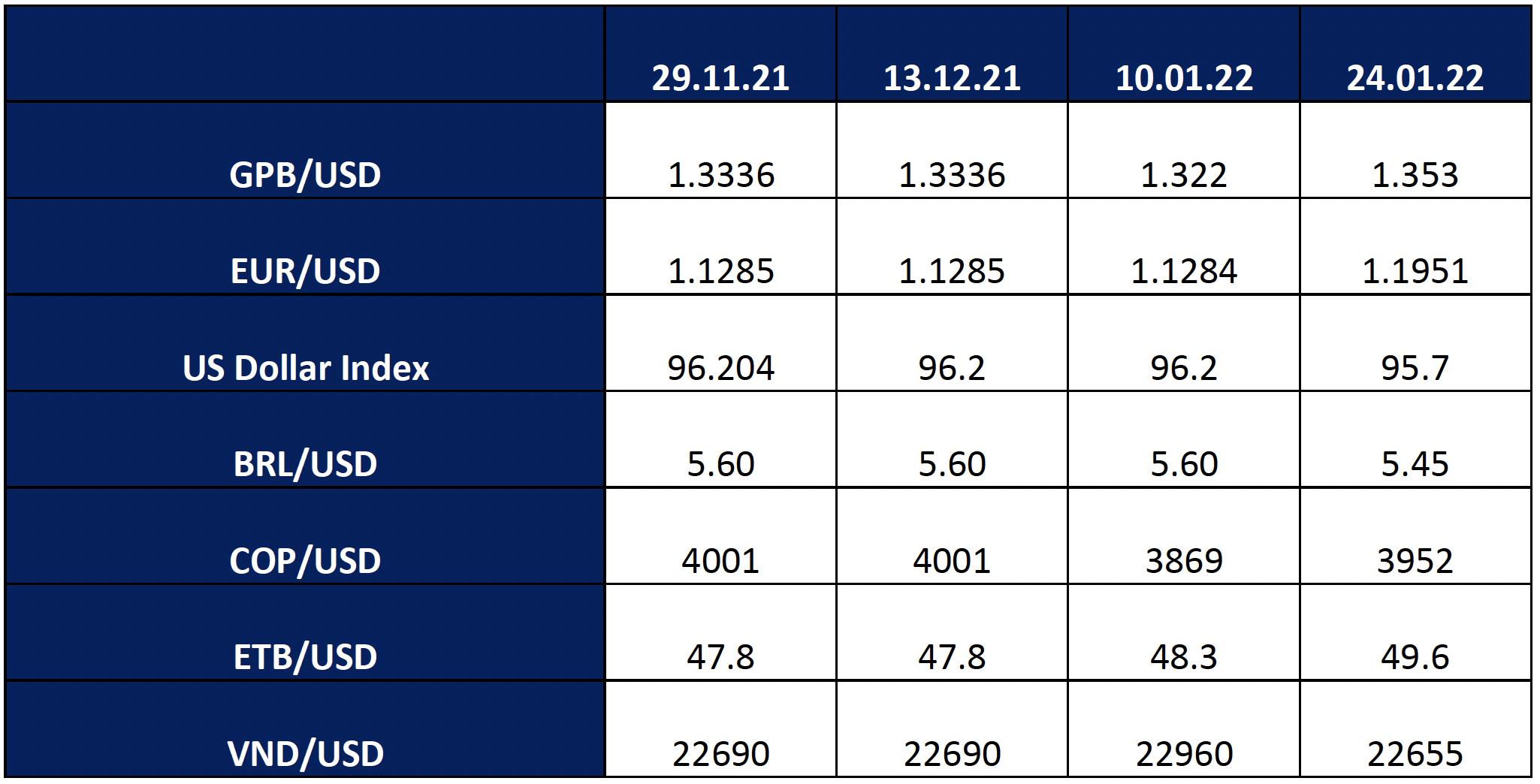