Good day. Welcome to this edition of the DRWakefield Fortnightly Market Report. This fortnight we’re covering the period Monday 9th of January to Friday 20th of January.

The market opened on 9th January at 158.30 c/lb, quickly hitting the high of the reporting period, 161.20 c/lb, before closing at 158.05 c/lb, just 25 c/lb below open, proving to be one of the least eventful trading days of the fortnight. This was not the case the following day, where things kicked up a gear, or rather down a gear. The market opened at 157 c/lb and dropped out, hitting lows of 149.10 c/lb and closing just above at 150 c/lb on the dot, falling a considerable 7 cents in one day. This sharp drop was triggered by the specs liquidating positions they had built up in anticipation of index funds rebalancing their portfolios. The 11th of January saw this continue, the market hit the floor and got low, low, low falling another 7 c/lb as the specs continued to liquidate, compounding this bearish waterfall. Current expectations of the Brazil crop are positive, with Bloomberg predicting a crop of 65 million bags, versus just the 56 million bags from the previous crop.  Certified stocks also continued to steadily increase, with an additional 7,630 bags passing certification bringing the total to a comparatively healthy 850,401. The following day, 12th of January, saw a near-exact reversal of market activity, as you can see in the chart above the candles are almost identical in size and shape. The market rose by 5.50 c/lb, closing at 149.40 c/lb, driven again by speculators, who, this time, were covering their short positions.

The NYC was closed on Monday 16th of January as it was Martin Luther King Jr Day in the US. The rest of the week’s activity was much quieter and the market cautiously regained ground, with a high of 157.55 c/lb on 19th of January, before trading largely sideways to close out the period at 154.60 c/lb.

The CFTC’s COT report with the cut-off Tuesday the 17th of January shows the net short continue to increase 12,870 lots bringing it to 43,940 lots total, the shortest position we have seen since pre-pandemic.

Certified US Arabica stocks now sit at 859,564 bags with a further 82,842 pending grading. These figure look much healthier than they did for much of 2022, and the more bags which pass grading, the more support this gives to the bearish market. However, the number of bags pending for grading is tailing off, and the pass rate for grading is low.

The London Robusta market had a much more bullish fortnight than the New York Arabica market. After dipping down to the period low of 1,788 $/mt in the initial days of the fortnight, it bounced back stronger than ever, with the bulls running up a huge increase of 70 $/mt on 12 January, and hitting highs of 1, 920 $/mt the following day.

The first half of the next week saw some slight tapering, ending 18th of January at 1,902 $/mt, before jumping back up to close out the period at 1,944 $/mt, 115 $/mt higher than the open of the period. The bullish movement was largely driven by heavy roaster buying, and supported by a cautiously more optimistic macro environment with expectations that US inflation may calm slightly.

Skyrocketing Brazilian diffs have been top of mind for much of the industry this past fortnight. The chart below shows how differentials have increased for Fine Cup and Good Cup over the last couple of months. As you can see, they typically float around the 0 mark, market level, often negative values, and rarely breaking the double digits. However, in the last two weeks, we have seen the prices shoot up from +8 c/lb against the market for both FC and GC, all the way to +18 c/lb for FC and +17 c/lb for GC. This means in the last fortnight Brazilian coffee has increased by about 10 c/lb. This price hike has been driven by the lowest market we’ve seen in 1.5 years and very little coffee being left available. The bearish market, as explained above, dropped more than 10 c/lb in the week of 9th of January, hence meaning a differential rise of 10 c/lb would even the price out for the farmer in Brazil. However, as the market then recovered the following week, what that means for roasters is they will see a sharp increase in the price of their Brazilian coffee, if they haven’t already.

In Vietnam, the Tet holiday (Vietnamese New Year), was celebrated on 22nd of January, and for the following week much of the country will be closed. Leading up to this most market activity consisted of fulfilling commitments, rather than active buying and selling, and we expect to see a quite week coming up as well in the wake of Tet. The weather in Vietnam has recently been very wet, with heavy rains experienced across the main coffee-growing regions. This has triggered healthy flowering across the regions, which looks positive for upcoming crops. It has caused difficulties in drying coffee which has already been harvested, and if it continues poses a threat to the quality of the coffee.

The coffee auctions have restarted in Kenya, after being closed over the festive period. 10th January was the opening auction of 2023, and prices and differentials both softened compared to the end of 2022, as the volume of the main crops is forecast to be substantial. Quality is improving as more of the early main crop enters the auction, rather than just the fly crop as was the case in December, and even some speciality micro lots are now being processed. Good volume is available, with close to 17,000 bags on offer at the first auction, a figure that is expected to increase until the end of January/early February. 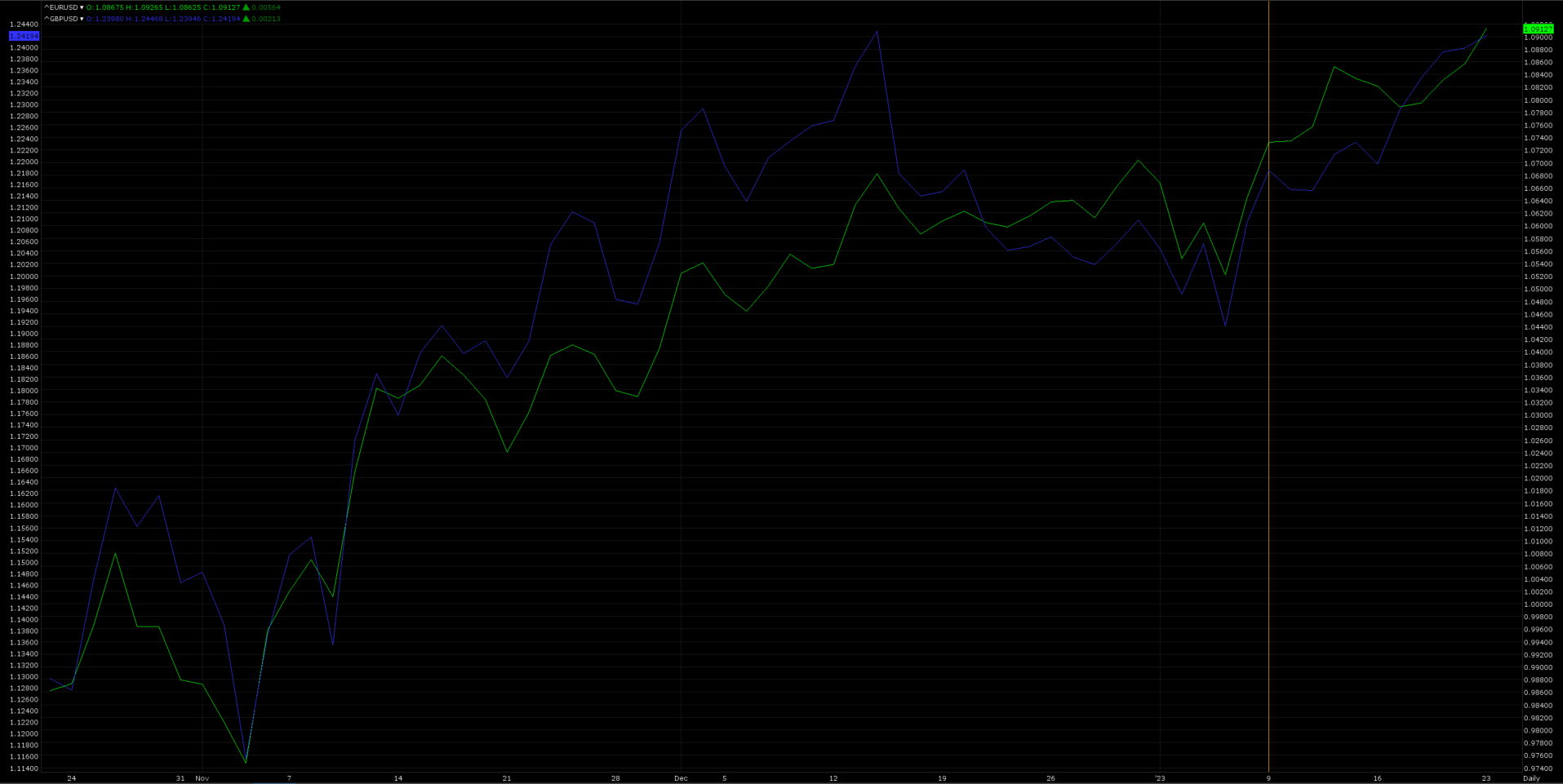 Currency has been looking relatively strong over the reporting period. The weakening Dollar has helped strengthen both Sterling and the Euro, and both currencies have come into 2023 harder, faster, better, stronger. Sterling (shown in blue on the chart above) opened the fortnight trading at 1 USD to 1.218 GBP and closed it knocking on the door of 1.24, the highest rate we’ve seen in 7 months. Over the week of 16 January alone GBP rose against USD by a significant 2.5%, an impressive week, making it one of the best performing currencies of the G10 currencies. These are the top most traded currencies in the world. This upward hike was supported by positive economic data being released showing that the UK economy was performing better than we expected. This news has raised expectations that there will be further interest-rate rises from the Bank of England.

The Euro has similarly been gaining momentum. Kicking off the fortnight at 1 USD to 1.073 EUR and steadily making gains till it almost reached 1.09 before the end of the period. Breaking 1.09 would mean hitting 9 month highs for the Euro. And in the week of 16 January, like GBP, EUR appreciated 2%, not quite as strong as Sterling but still significant. This strength similarly comes off the back of easing fears of recession in the Eurozone as natural gas prices fall off the back of a mild winter, and is further compounded by comments from the European Central Bank signalling more interest rate hikes in Q1.