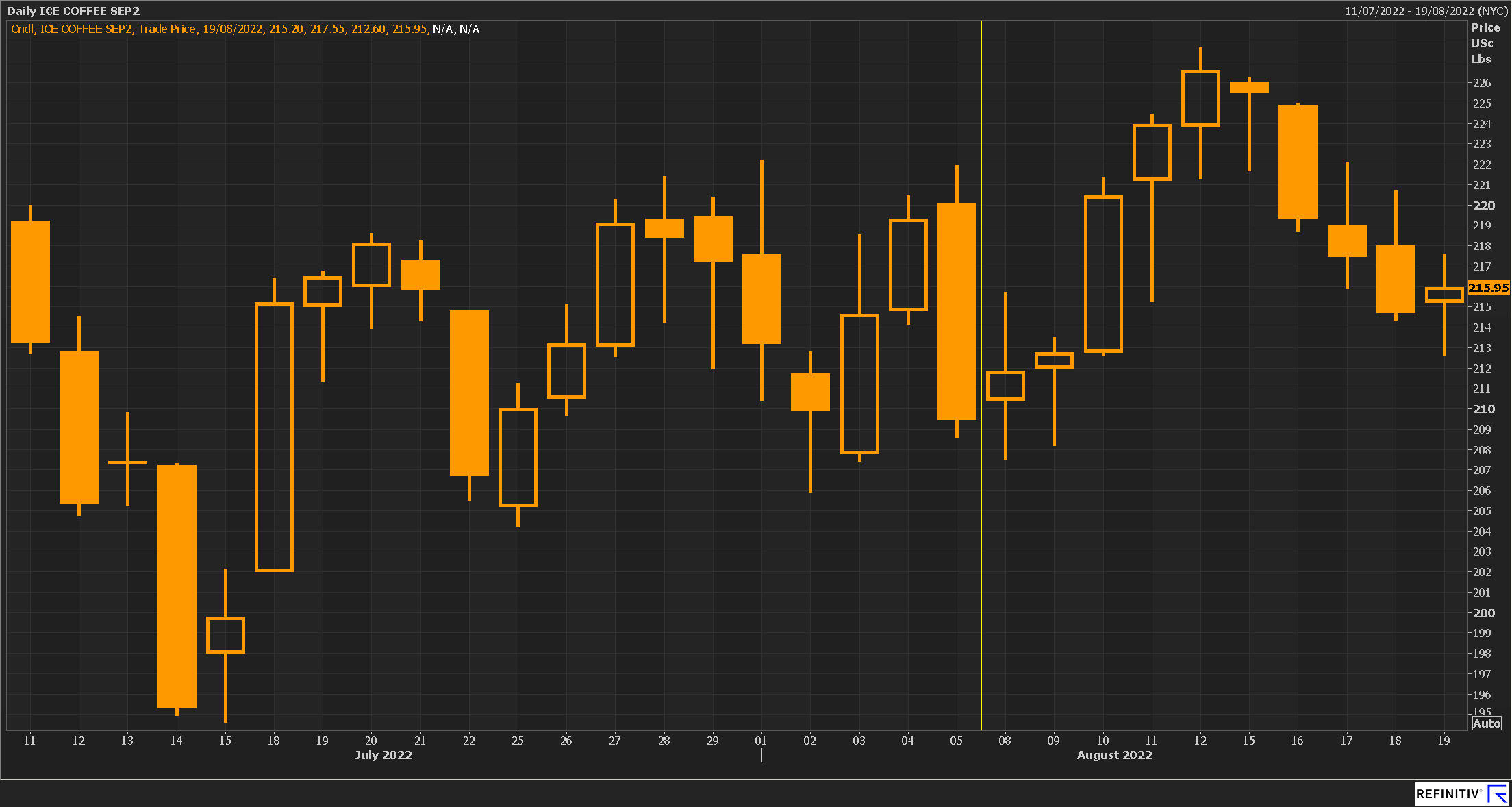 We entered Monday 8th August off the back of a 13.4 c/lb daily trading range, and it was a tense start to our Monday morning brew to see if the volatility would continue. In the end, Monday was a quiet day in comparison, but it did go on to record the fortnightly low (207.50 c/lb) before closing slightly higher than it opened. As you can clearly see from the graph, this was a tale of two weeks; the first week was dominated by the bulls and the bears took control thereafter. Certified stocks continued their drawdown over the course of the week and this provided some support for the uptrend. On Wednesday the market closed nearly 8 c/lb higher than it opened and on Friday it recorded the fortnightly high of 227.30 c/lb.

However, the following Monday put a stop to the bulls and the next 4 days all closed lower than they opened. Friday’s daily range was 4.95 c/lb but it could only close 0.75 c/lb higher than how it started. Good weather from Brazil and more coffee successfully graded for certified stocks fuelled the downtrend. However, it seems that many of the ‘new’ stocks were decertified stocks that were regraded so recerts won’t lift certs quite as high as the number of pendings suggest.

First Notice Day (FND) for the September terminal is this week so many traders will be squaring out their positions in preparation for switching over their book to the December terminal.

The CFTC’s COT report with the cut-off Tuesday 9th August showed the funds added 2,518 lots to their Net Long Position and this reflected their broader strategy across soft commodities as recent dry weather lowered many crop forecasts.

The CFTC’s COT report with the cut-off Tuesday 16th August again showed the funds padding out their Net Long position, adding 2,792 lots to total 18,849 lots Net Long. The Open Interest declined but this was linked to the September Arabica options expiring.

Certified US Arabica stocks now sit at 610,000 bags. This is half of the January certified stocks level and there are concerns regarding where coffee will come from to replenish these stocks as all washed Arabica origin differentials are sky high. Will semi washed Brazils save the day? Too early to tell. 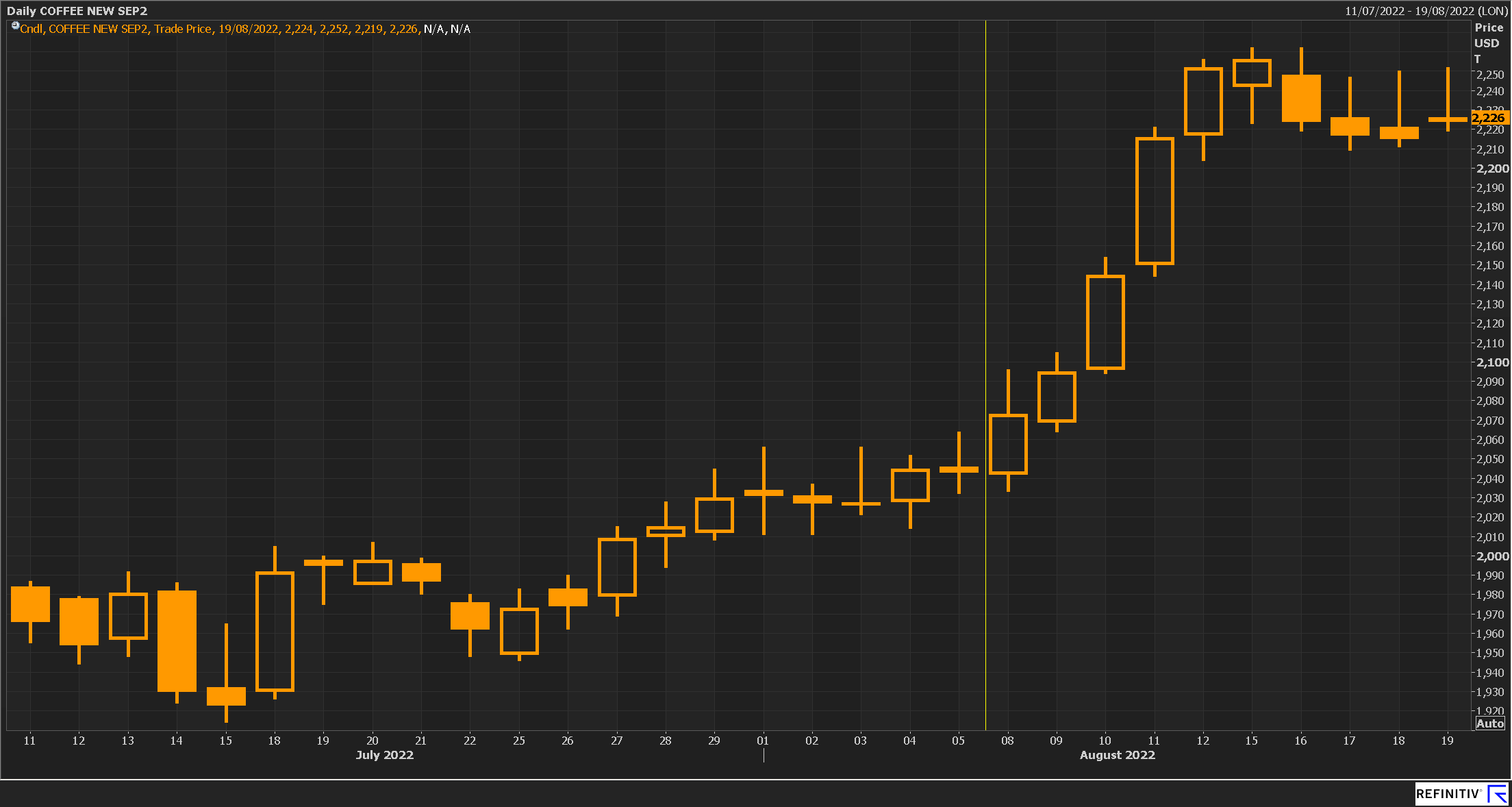 Business is slow in Brazil. Differentials have strengthened and the firm BRL/USD is keeping them that way for now. Nowhere is this more pronounced than Rainforest coffee, which continues to get more and more expensive as the mismatch between supply and demand grows. Many partners at origin are undergoing their transition audits and feedback is that the new rules are more admin heavy than before, which is putting off some producers from certifying to the new standards. The difference is most pronounced for ex UTZ producers as the difference between the new RFA standard is starker when compared to the old and new RFA standard. Logistics has been stable if you book in advance but freight rates to Europe are still around $4000 and ships leaving in August are already closed for new bookings. As new crop Brazil starts shipping in earnest in November we expect to see more congestion.

Colombian buyers are upping their Peruvian purchasing this crop in a response to the high prices their side of the border. Many now have permanent offices in Jaen and they are welcome as they are paying good prices for lower grades. The knock-on effect, however, is that grade 1 pricing has risen, and this is hurting cooperatives and exporters that have contracts to fulfil at lower differentials. With volume late and lower than expected, most groups are not offering anymore coffee till they have covered their shorts. This could mean that in late September there is a flurry of new offers; they will likely be rather high however as many groups will need to bring up their average to compensate for the losses incurred for covering their shorts.

Kenya is in the middle of the Fly crop and quality is reasonable. Elections are over, the local situation is peaceful and normal business activity has resumed. That said, the runner-up in the vote has filed a lawsuit challenging the outcome of the elections and this means there is uncertainty hanging in the air. Results show that the victor, Ruto, won 50.5% of the vote, and Odinga won 48.9% of the vote. Odinga is alleging that the vote was marred by rigging and counting irregularities. Politics aside, weather conditions are cool and dry. 15-17,000 bags are on offer weekly and the majority is AB. Multinationals continue to dominate this origin with the majority of volume passing through their hands. 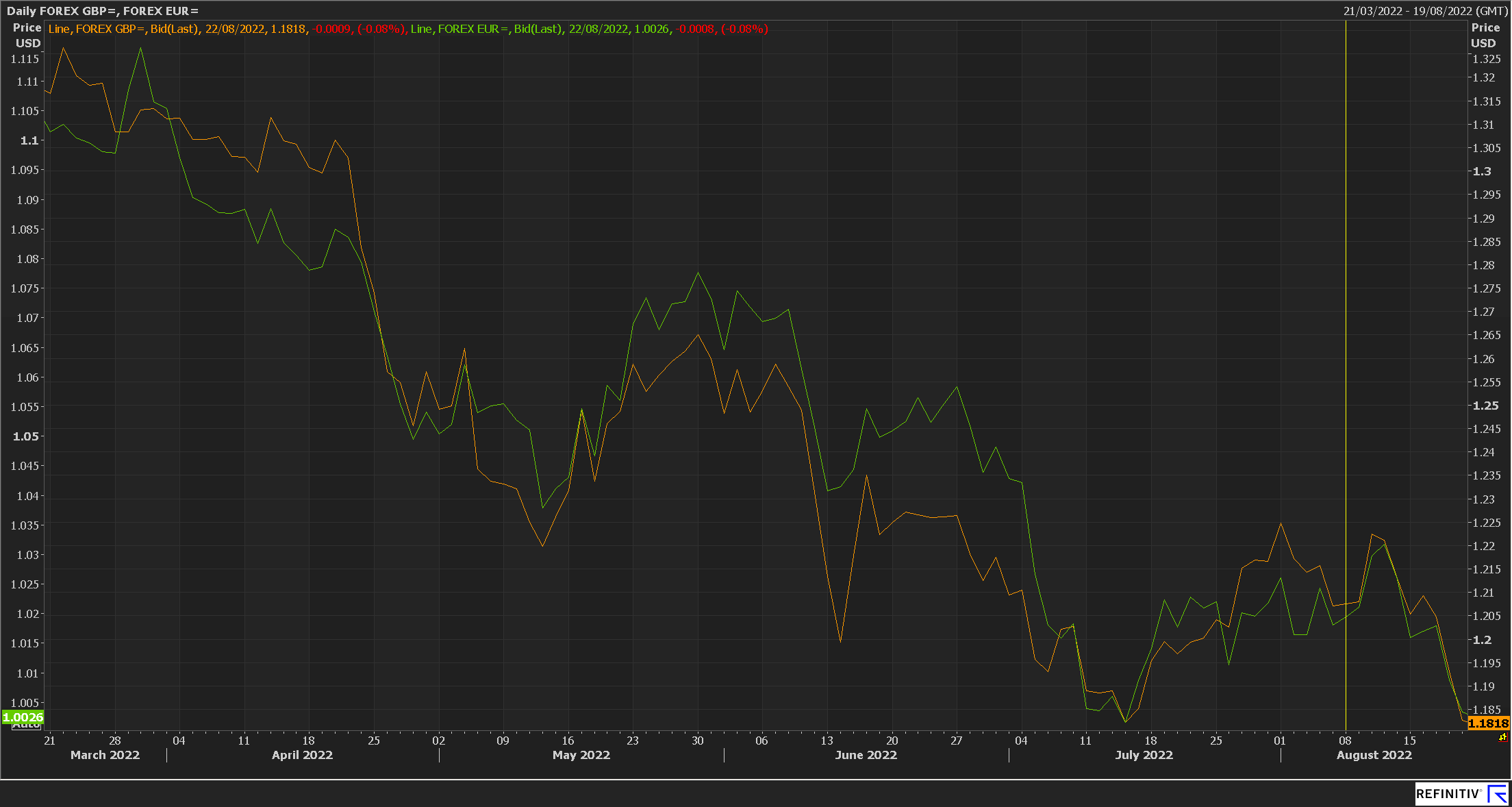 Many of the globe’s central banks have risen rates (sometimes more than once) over the last 6 months and the question is, what is global demand looking like? Is it cooling off? Raising rates increases debt servicing costs for companies and consumers alike: with less savings around, there is less spending and that lowers prices. However, how long will it take to suppress demand and pricing? It’s difficult to say, but if we head to the US, although July’s CPI increased by 8.5% year on year, it is down from the heady 9.1% recorded in June. And the minutes of the FED’s July meeting released last week confirm that it remains firm in its conviction to keep raising rates to curb demand. When the BoE raised its base rate to 1.75% at the beginning of August, it maintained that with inflation above 13%, it had to take action to prevent spiralling price rises from becoming ingrained and it also remains committed to taking more action going forward.

It seems the ECB has less room to manoeuvre as many market participants believe that the eurozone will succumb to a recession this year and this will limit the central bank’s ability to tighten policy-this could hurt the Euro. With the FED and BoE predicted to keep raising rates, this will strengthen their respective currencies, and it’s not unthinkable that we may see the Euro hit parity with the Dollar again and perhaps continue to weaken. In this risk off environment, Dollars are still king and this is a key factor in keeping pricing high; the days of a low coffee market combined with a strong Pound and Euro that kept FCA Europe pricing low for so long seem but a distant memory.

Both Pound Sterling and the Euro strengthened against the Dollar at the beginning of our reporting period but then Dollar strength dominated the narrative and we saw EUR/USD get close to 1 and GBP/USD ticked down to nearly 1.18. At the moment, all eyes on the Greenback.