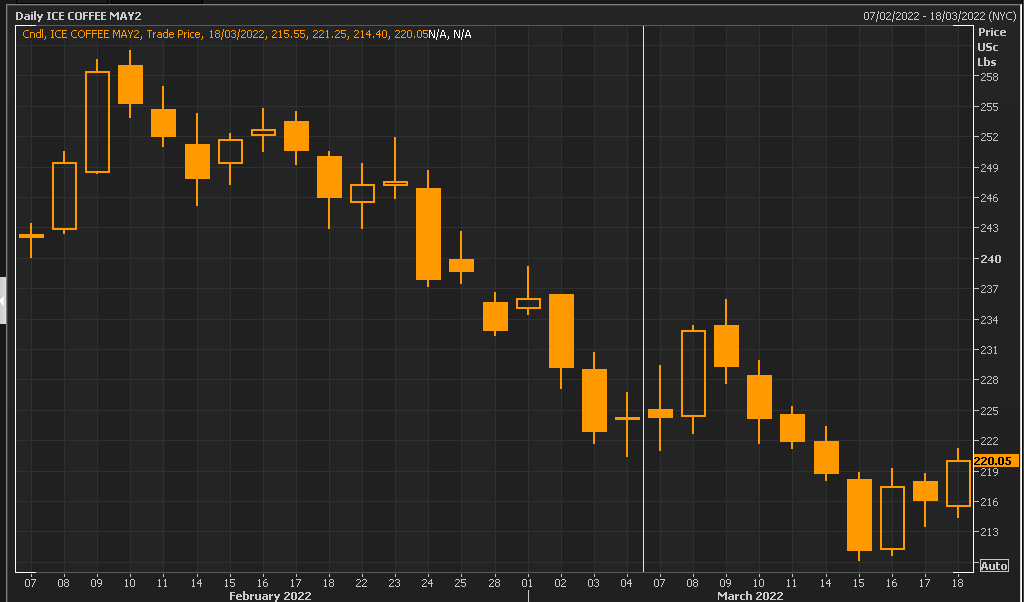 We saw in the previous report a downtrend caused by the market’s desire to grasp onto safer assets and let go of soft commodities in the wake of Russia’s invasion of Ukraine. At the start of this period, we witnessed a slight pullback as it opened on the 7th March at 225.05 c/Ib and reached a high of 235.90 on the 9th March. This occurred due to a brief period of speculative buying and, as coffee origin currencies remained firm against the Dollar, was helped by the rising price of other commodities. Brent oil hit a high of $131.64 per barrel. However, as optimism grew around negotiations in Ukraine, and some Chinese cities entered new lockdowns, the price of oil came off which pulled Arabica down the same path. The downtrend continued for the next few days and bottomed out at 210.05 c/Ib. Some speculated that this drop had come too hard and fast and speculators looked to cover their shorts as inventories continue to remain small. The period closed out at 220.05 c/Ib.

In the CFTC’s COT report with the cut-off Tuesday 8th March, we saw the non-commercials trim their net long down to 33,740 lots and the commercials lessened their net short position to -79,838 lots.

Certified US Arabica stocks have actually increased for the first time since May 2021 and climbed back above the significant figure of 1 million to reach 1.03 million bags. The same thing occurred for Robusta stocks which rose to 1.54 million bags. 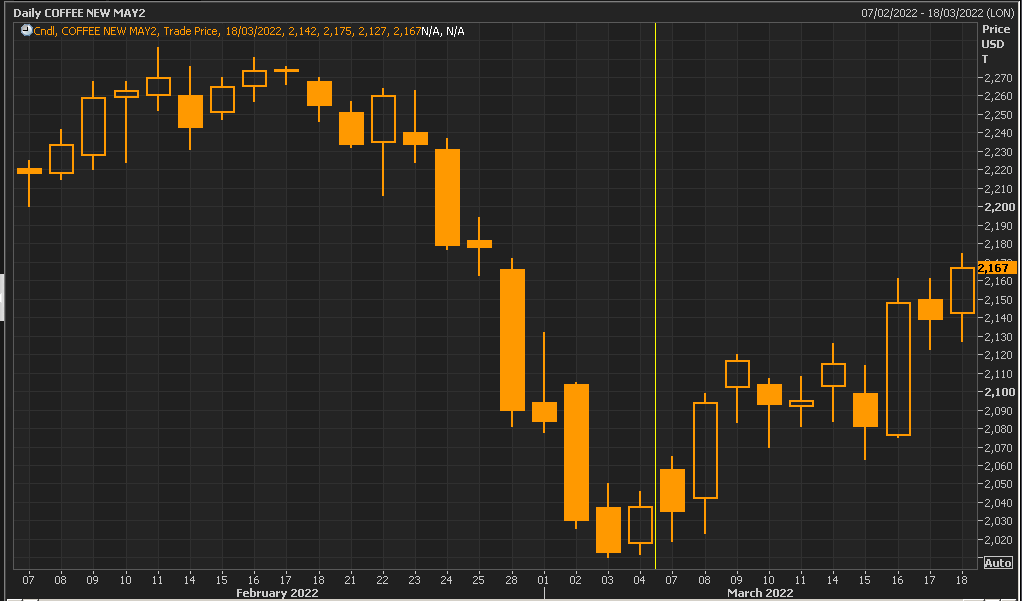 The Robusta market chose the opposite path to Arabica, bumpily gaining value over the fortnight, having seemingly reached its low point the week before. Opening on the 7th at 2,058 $/MT and initially closing lower in the first session, the subsequent two days saw an uptick to 2,120 $/MT under the same pressures as Arabica. A period of sideways trading held out until the 16th March, which then benefited from a rise of 3%. The final session of the period saw further gains to close out at 2,167 $/MT, with still some way to go to match mid-February levels.

Rising costs of inputs are a pretty consistent mention in just about every report written at the moment, and this will be no different. The Brazilian company Petrobras announced a 25% increase in diesel prices. Electricity and fertiliser costs are high and set to go higher as Russia supplies 20% of the world’s ammonia market. These increases are already being reflected in the sticky diffs being offered by exporters. The warm air that has been sitting around since the tail end of February is being pushed away by a cold front that should bring some rains with it.

Last week we returned from an origin trip to Guatemala. Many areas have finished harvest, and a few are almost complete. One of the major difficulties at harvest this year was the lack of labour available due to Biden’s immigration law change. Many Guatemalans have left to work in the US. Remittance back to the country is now up to $20 billion USD per year (a huge sum when set against the $600 million value of coffee exports). Wages are up, pickers are down, and cherries remain on the trees. Some other feedback we have received it that it’s just as well there has been a consistently high C market over the last 9 months as, without it, we would have seen a coffee crisis as producing costs would have outweighed the sale prices.

Kenya has seen the last of its harvesting and processing for this season, and the auctions are coming towards their closing stages. Traders are looking to cover their physical short positions. We are seeing main grades diminishing and larger amounts of under grades as well as higher differentials, especially for those of AA FAQ which rose over 30 c/Ib from earlier in March. Logistics out of the country are still challenged by a lack of food-grade containers. Conditions have been cool, with some rain, and the fly crop is encouraging. 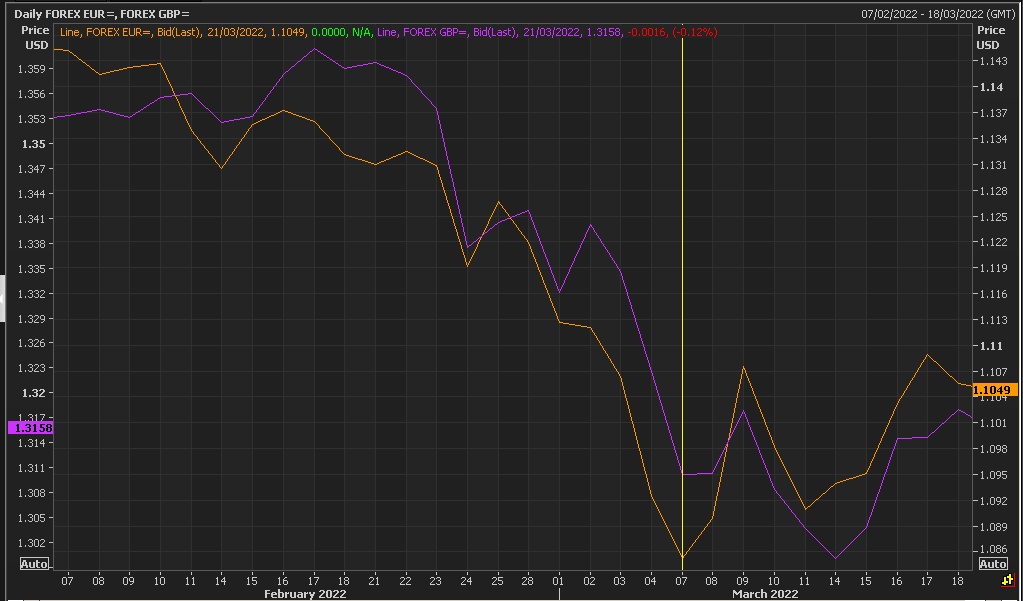 The Euro has been another victim of the Ukrainian war as the currency sits on the doorstep of the conflict. Losing value since the start of February it touched its lowest point on the 7th March, claiming a value of 1.086 against the Dollar. This drop allowed Sterling to hit its highest level against the Euro since June 2016, but weakness against the greenback persisted. The Pound opened at 1.311 against the US currency. The Euro experienced a helping hand from the European Central Bank later in the week after announcements of joint EU bonds funding energy and deference, (three guesses why), and the value improved against the Dollar to touch 1.107. Both the European coins had a slump but retook ground by the end of the period. The BOE went ahead with the plans for an interest rate hike to 0.75% which initially drove the value skyward but cautions around further rises meant that it wasn’t to last long. The Euro’s efforts to climb higher were hampered by USA interest rate hikes and warnings that inflation on the European continent will certainly continue and likely increase as the war goes on. Sterling closed the period on 1.315 and the single currency on 1.1049.

We hope you enjoyed this report and see you in a fortnight! Till next time coffee folks! 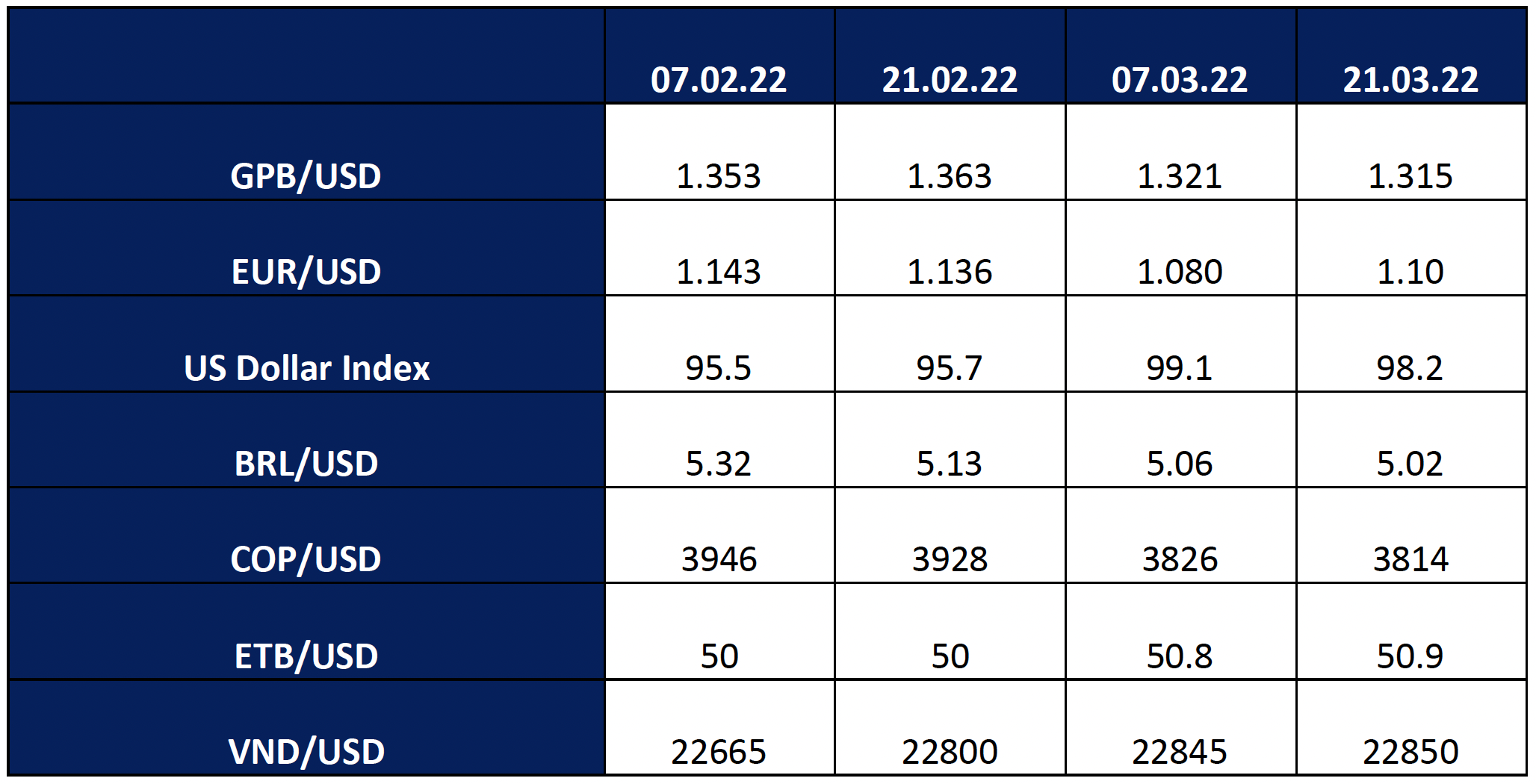