Henry wrote this fortnight’s report, which covers the coffee futures market and key currency pairings from 7th February to 18th of February 2022. The report also updates us with news from Brazil, Colombia and Indonesia.

Please follow the link below to read the full report. 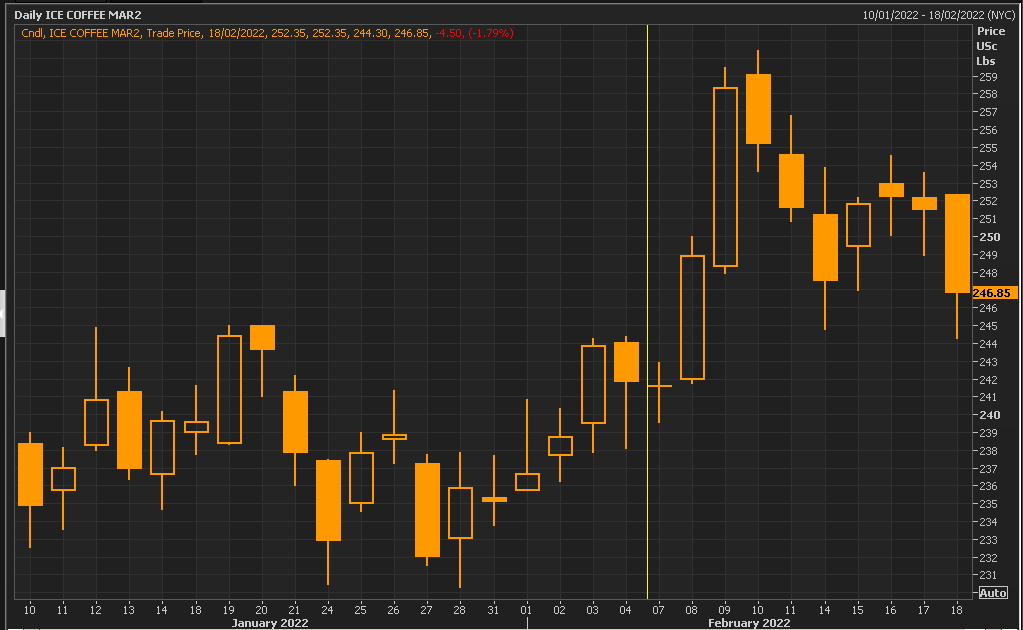 Arabica futures opened Monday 7th February at 241.60 c/Ib. An uneventful day saw almost no change between the open and close, only one tick up of 0.05 c/Ib. This changed on Tuesday 8th however, as the market reacted to the dwindling certified stock numbers. The NYC rose from 242.00 c/Ib to 248.95 c/Ib and then further to close at 258.35 on the 9th. Adding pressure to the upside was the approach of the First Notice Day for the March-22 terminal on Friday 18th. Despite coming off by the end of the day, the highest point, 260.45 c/Ib, which represented an 11 year high, occurred on the 10th February. This tip over into 260 c/Ib spread the feeling that the market was overbought, lowering prices over the next few days which came down to 247.55 c/Ib. Sideways trading saw out the remaining few days of the period until Friday 18th where another drop ensued. The last sessions closed out at 246.85 c/Ib. Incoming data about the Brazil 22/23 and crop beyond, as well as the persistent logistical pressures indicate a likelihood that 250 c/Ib is going to be a regular figure for the foreseeable future.

In the CFTC’s COT report with the cut-off Tuesday 8thth February saw the non-commercials up their net long position to 50,918 lots. The commercials extend their net short by -7,110 lots to reach -101,271 lots.

The drawdown in Certified US Arabica stocks is still running a considerable rate touching 1.01 million bags, 100,000 bags down from the last report. 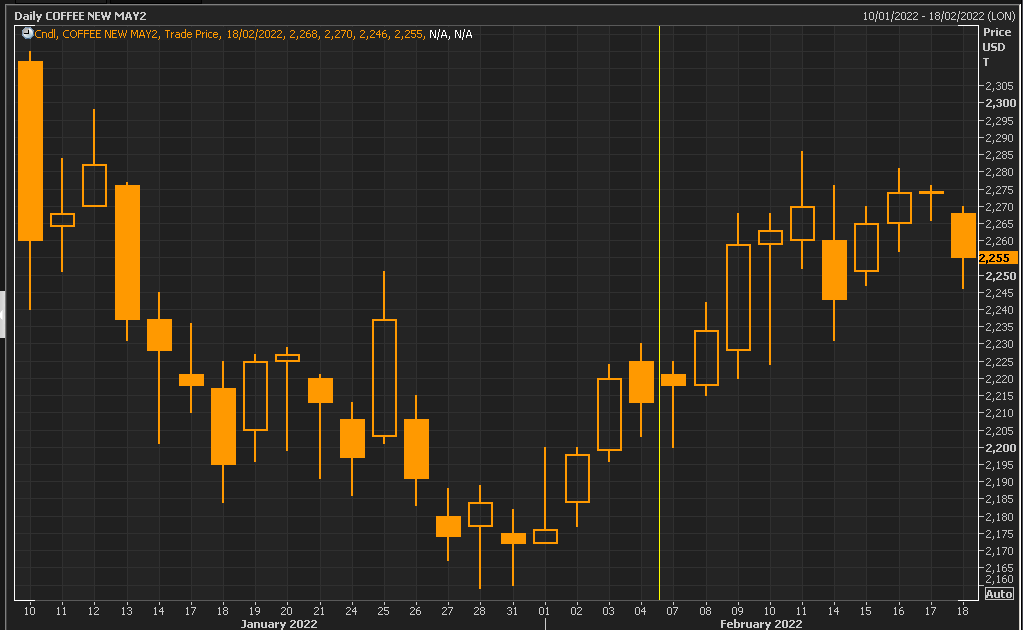 The Robusta May-22 terminal saw a similar uptrend to Arabica. Opening at 2,221 $/MT on the 7th, prices gathered strength and climbed to reach 2,270 $/MT by the close of the 11th. Providing most of the momentum was the increases in the Arabica market. News that 18,000 tons of Robusta from Vietnam and Indonesia shipped to London warehouses by breakbulk carriers helped to cap the uptrend and a sideways period kept prices reasonably stable over the next few trading sessions. A little value was lost on Friday 18th and the market ended the period at 2,225 $/MT.

As the NYC rose to it’s highest levels since 2011 in the past fortnight, focus shifted to Brazil as the significant driver. The reduced production volumes of the 21/22 crop and logistical issues are being demonstrated by the release of the January export figures that showed exports were down 10% when compared with this time last year. Overall, exports are running 20% lower than the previous year. These lower export figures are allowing differentials to remaining high despite the rising market. Although the crop failure for 22/23 year seems to have been taken into consideration in the market price, more data about the upcoming harvest will cause further fluctuations. Without any weather difficulties Brazil could have produced nearly 70 million 60kg bags but is looking likely at 59 million bags. Rainfall levels are supporting good growth for the 23/24 crop.

The Colombian harvest continues with about 90% already picked. Differentials are also remaining strong as production and exports fall behind 2021 and 2020 figures. An interesting point to note is the increase in Brazilian coffees being imported into Colombia, indicating that every kilogram of Colombian coffee has a value worth selling. This is a trend that has been moving in an upward direction, in 2019 it was around 37,000 60 kg bags whereas 2021 saw over 90,000 bags imported. Rains are set to continue during the cherry expansion stage for the next crop.

In Indonesia they are approaching the upcoming harvest, which is set to begin in March or early April. Volumes are expected to be down by 10-15% as a result of heavy rains at the end of last year and too little rain over the next few weeks could worsen the problem (aren’t coffee trees fussy!). Local prices have seen increase due to the reduced volume high NYC prices, and large exporters having long contract positions that they are trying to honour. There is a third wave of Covid going round so industry has taken it’s self back to working with 50% of population on alternate days. 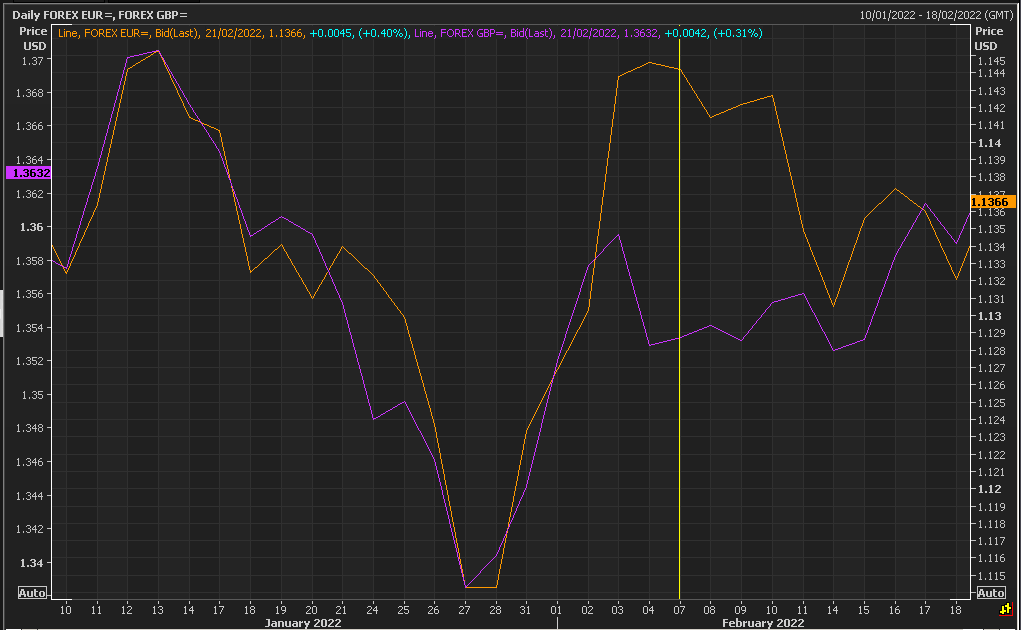 In the last report we have changed the format of the FX section and combined the GBP/USD and EUR/USD graphs. We decided to do this as we often talk about how they behave in relation to each other and thought it would be easier if all the data was on one graph. The line in purple represents GBP/USD and the line in yellow represents EUR/USD.

Both GBP (1.354) and the Euro (1.144) started off the period reasonably strongly against the Dollar after a sharp rise the week before. The Dollar Index was strong as yields on the 10 year Treasuries pushed two year highs just below 2%. The US has experienced its highest inflation rate in 40 years, at a figure of 7.5%. Whilst EUR lost value over the coming days to drop down to 1.131 as comments from the ECB pushed back against a previous hawkish sentiment. Sterling managed to stay more stable. Both experienced a slight pickup from 14th, following UK jobs data. The Euro gathered some value as tensions between Russia and Ukraine de-escalated slightly as Russia claimed it was withdrawing troops, although apparently evidence shows otherwise. The Euro closed lower than its period open at 1.134 but the Pound closed slightly higher at 1.361. 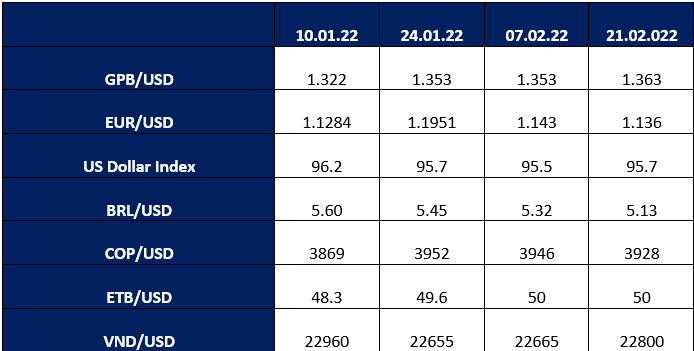