Good day. Welcome to the fortnightly DRWakefield Coffee Market Report for the period covering Monday 4th of October to Friday 15th of October. This report touches upon the Arabica and Robusta coffee futures market, currency pairings and news from origin. For clarity on any terminology used in the below coffee market report, see our Market Report Terms page. 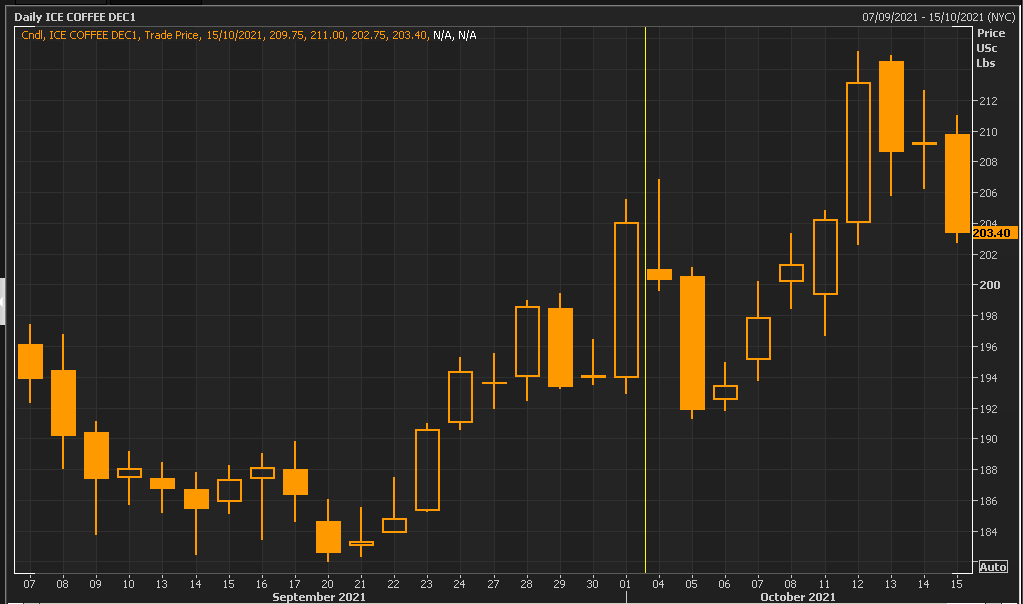 Arabica futures had receded slightly from the start of October but opened on the 4th at 201 c/Ib dead. The first couple of days saw a significant drop of nearly 10 c/Ib to 191.90 c/Ib driven by plentiful rains in Brazil. However, any ground lost was quickly made back when, over the next 6 days, the market climbed to reach late July 2021 levels touching 215.15 c/Ib at its peak on the 12th of October. The draw from physical certified stocks is claiming the majority of the upward momentum as market participants look to obtain cheap coffee, namely Brazil and Honduras. Despite promising news on Brazil’s weather front still occurring, defaults from Colombian farmers allow prices to remain firm. After Thursday the 14th saw a difference of only 0.15 c/Ib between open and close, Friday saw the NYC reduce to a close of 203.40 c/Ib.

In the CFTC’s COT report with the cut-off Tuesday 5th of October as predicted by Henry last report, the non-commercials increased their long once again to 58,032. Index traders moved the same way but only marginally to 54,680 The commercials reduced both their long and short positions, but this had the effect of upping their net short to -103,187.

In the CFTC’s COT report with the cut-off Tuesday 12th of October, we saw a continuation of the previous weeks’ trends as the non-commercials increased their long, although only marginally, to 58,415. To counterbalance this the commercials extended their overall short position to -107,716.

Certified Arabica stocks took a plunge from their September and early October levels. Starting the month at 2.08 million bags, they are now down to 1.92 million bags. However, this is still higher than this time in 2020, as well as the 2-year and 5-year average. Robusta has also seen a decrease as draw offs continue, now holding at 2 million bags. As high prices remain it is likely that certified numbers will continue to fall as producers can obtain high prices from selling to other businesses rather than the board. 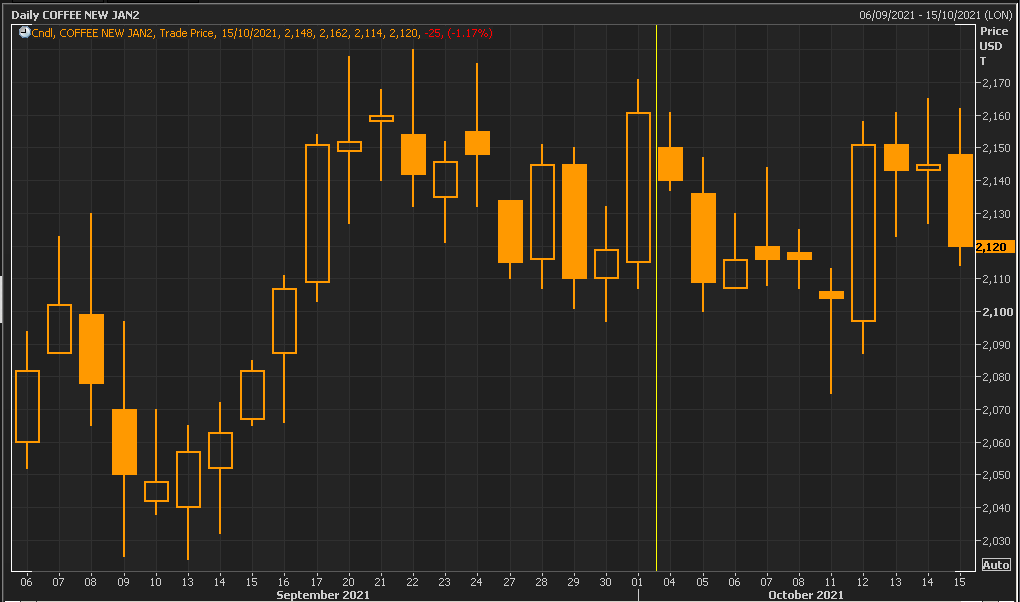 Robusta, like the NYC market, witnessed significant drop-off on the 4th and 5th of October as a result of the downward pressure of Arabica. It started at 2150 $/MT and lost 50 $/MT by the end of Tuesday. However, unlike the C market, Robusta was not able to retake some ground over the coming days. Dropping significantly lower to 2075 $/MT on the 11th of October. It had to wait until the next day to bolster itself and closed at 2151 $/MT. Focus is on the start of the Vietnamese harvest which is set to begin in the coming weeks. The next couple of days saw sideways trading until the 15th when another drop settled out at 2122 $/MT.

Tuesday 12th October was a national holiday in Brazil and the NYC climbed up. Internal prices also rose along with the NYC for semi-washed and certified fine cups. Nevertheless, new FOB sales are not picking up as logistics are still causing issues for buyers and sellers alike. More rainfall is leading to an almost unanimous feeling that flowerings are greater than expected, even amongst the frost hit areas. This does raise the question of whether the damage to the upcoming harvests will be as large as once feared.

Information in Colombia from the National Federation of Coffee Growers states that production is 22% up from September last year, now totalling 1.2 million bags. Despite this, worries over contract defaults persist as many exporters fail to purchase the green to fulfil their obligations. Over 1 million bags (nearly 10% of the annual crop) have not been delivered by farmers. Diffs remain firm at around +55 c/Ib for Excelso allowing other milds to maintain their prices as well.  Some sources have indicated that overall, the 21/22 crop is going to be down in comparison with last year, putting further pressure on those exporters who sold forward contracts before the July price spike.

As the Vietnamese harvest approaches, more attention focuses in. Forecasted rains could cause disruption but are far enough away not to raise too many concerns just yet. Farmers in the meantime are using the rain to aid in their last application of fertilizer. It is estimated that around 10% of past crop is still with farmers who are slowly selling it off. Other agricultural products, such as pepper, are offering higher prices. If shipping issues continue to persist, reducing western market stability, could we see a shift of farmers moving away from coffee with the hopes that pepper could provide consistent income with markets closer to home? 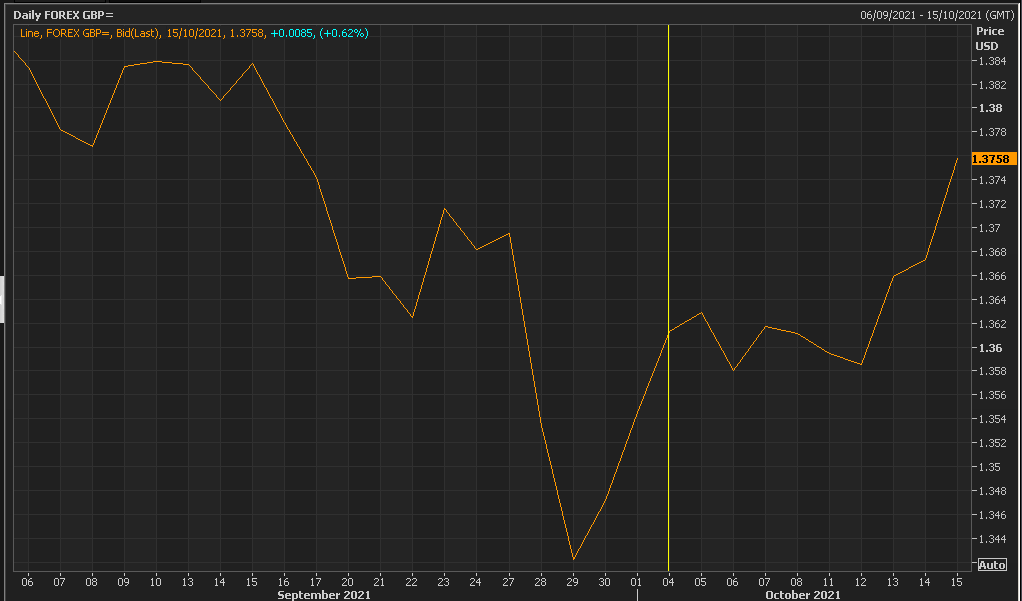 The Cable has had a relatively uneventful period over the last fortnight with a limited spread when compared with the last two weeks of September. Starting off at 1.361 a mixture of the UK fuel crisis and indications that the UK might see an earlier than expected interest rate hike to curb inflation worries, seemed to level each other out and it wasn’t until the 12th of October that a significant gain was made up to 1.366. This upward momentum persisted, and the 15th finished on a level of 1.375, providing some slight relief to British coffee buyers.

Sterling has hit an 8-month high against the Euro. This has largely happened as a result of speculation that the BoE will raise interest rates in the upcoming months to mitigate inflationary concerns. To a lesser extent, a 0.4% growth of British GDP in August helped to strengthen the Pound. According to the IMF, the UK could see the largest growth of the G7 nations in the next year. 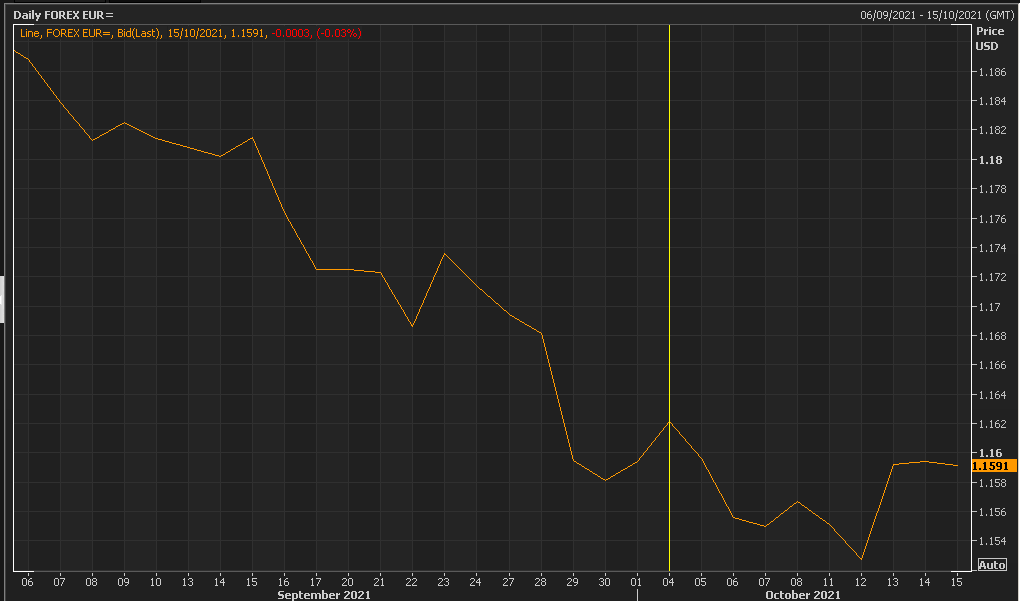 The European energy crisis has weighed heavily on the Euro and, at the start of October, showed little sign of letting up. Opening the period at 1.162, economic and inflation data from Germany prompted it to fall further to 1.153 on the 12th. It was then the turn of the US to release inflation data which allowed the Euro to take some ground off the back from the Dollar weakening. Discussions have turned to whether a dovish or hawkish approach is the best policy going forward. The doves currently dominate the European Central Bank, but a hawk’s talons can be surprisingly far-reaching. The Euro remained virtually unchanged for the next three days.

We hope you enjoyed this report and see you in a fortnights time for the next one. Till next time coffee folks!