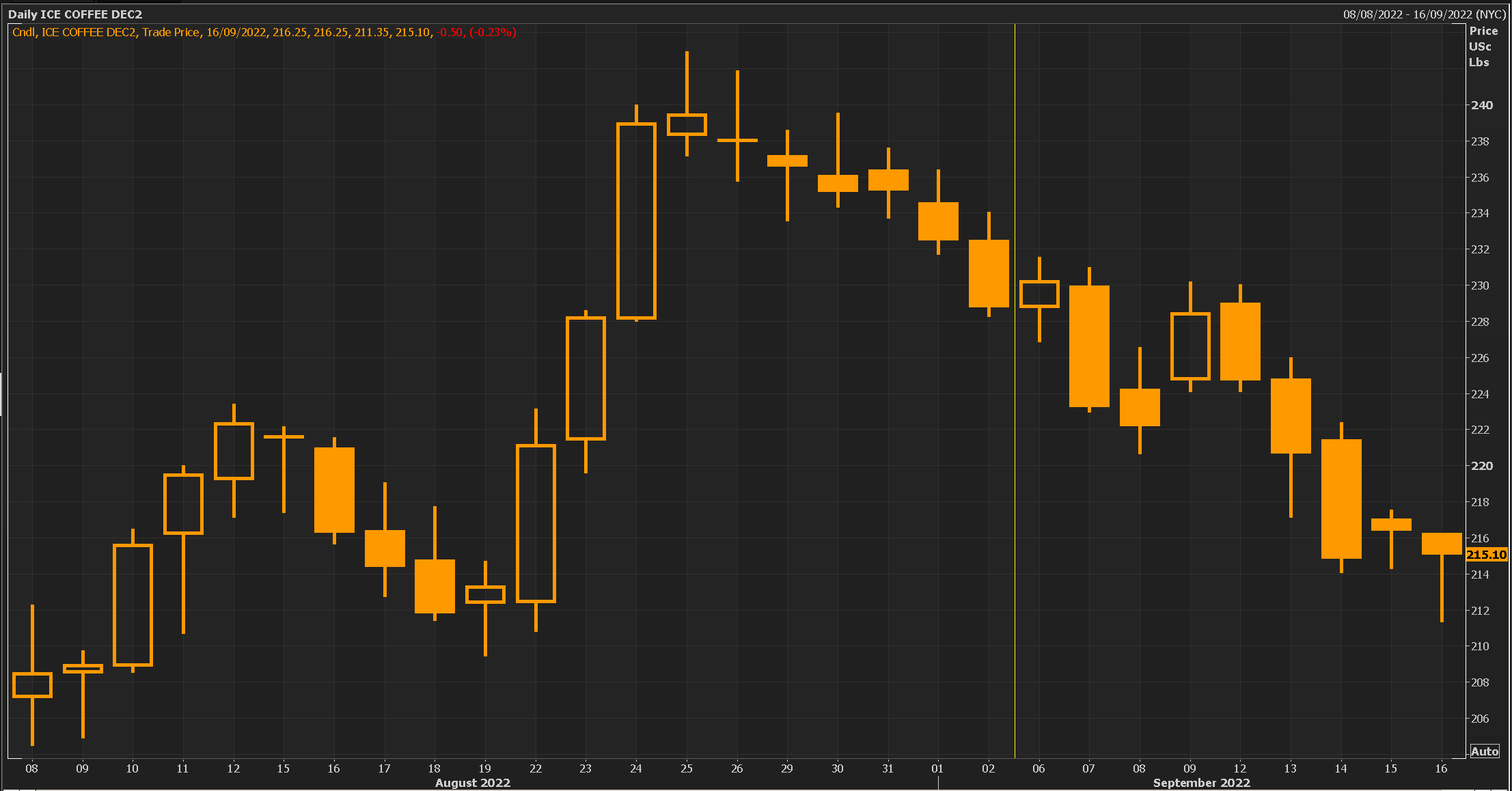 Monday 5th September was closed for the US Labour day bank holiday so the reporting period started on Tuesday 6th September. Tuesday opened at 228.75 c/lb and the daily high of 231.55 c/lb was also the high of the fortnight. The following day saw 6.70 c/lb wiped off the market open and this bearish sentiment continued the next day with pressure from the strength of the Dollar weighing down on coffee and other commodities. The Dollar surged to a 37-year high against the Pound and a 25-year high against the Yen. Weather concerns in Brazil precipitated short covering and a pullback on Friday that saw the coffee market close at 228.50 c/lb, only 0.25 c/lb less than how it started on Tuesday.

However, this was not to last; Friday’s action could not fend off the bears. During the following week, every day the market closed lower than how it started. Wednesday’s drop was the largest where it closed 6.60 c/lb lower than how it began. This was largely driven by the higher than expected inflation data coming from the US which cemented expectations for more interest rates hikes that could erode demand for commodities going forward. Forecast of rains across the southern part of Brazil also fuelled the downtrend. Thursday was quiet in comparison with the market taking a breather after the active day before. Early during the day on Friday the market shot down to the fortnightly low of 211.35 c/lb, spurred on by a stronger Dollar and a sizeable increase in certified stocks. However, it swiftly bounced back up and the week closed out at 215.10 c/lb.

The CFTC’s COT report with the cut-off Tuesday 6th September was very quiet compared to the week before where we saw the large non-commercial rally where over 6,000 lots were added to the Net Long position held by the speculators. This week’s trading was tentative and in the end the Net Long saw 2,002 lots shaved off its position to total 28,752 lots Net Long.

The CFTC’s COT report with the cut-off Tuesday 13th September saw the specs reduce their Net Long position by 4,806 lots. The market had been trending downwards and this reduction was the clearing out of some newly established speculative longs from a few weeks prior.

Certified US Arabica stocks are slightly larger than expected (but still low) with an impressive increase of over 200,000 bags in August. Everybody is still asking the same question, “Will we see Brazil semi-washed coffee coming to the board like we did last year?” 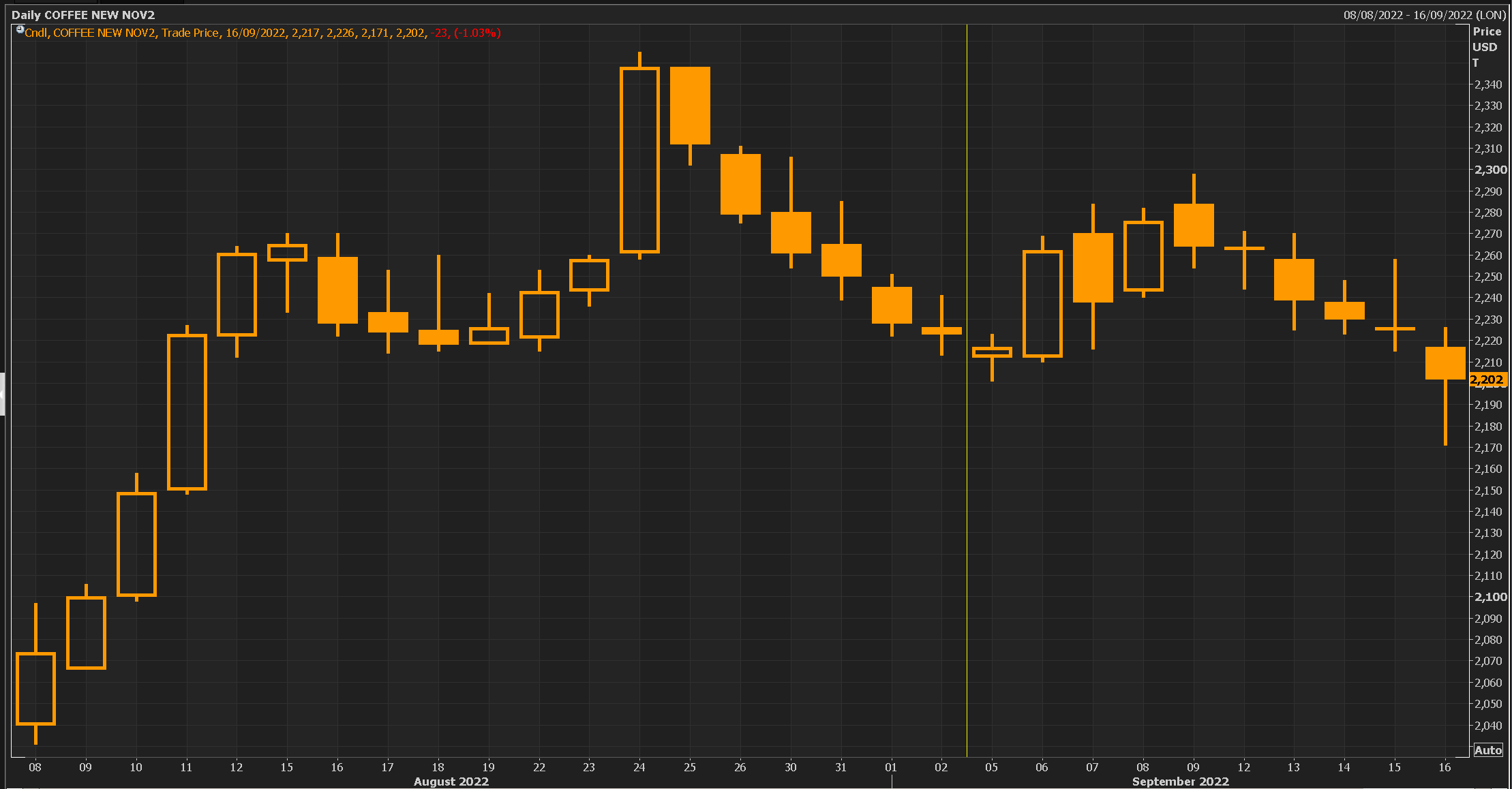 Unlike Arabica, the Robusta market was open on Monday 5th September and it started trading at 2,212 $/mt. It was, however, a quiet day. Tuesday was not. The market closed 40 $/mt higher than how it started and this was the largest daily trading range of the fortnight. It broadly traded upwards and on Friday the fortnightly high of 2,298 $/mt was reached before the week closed out at 2,264 $/mt. The week that followed had a similar one to Arabica where we saw a downtrend throughout the entire week and the fortnightly low occurring on the Friday. For Robusta this was 2,171 $/mt and it closed the fortnight out at 2,202 $/mt.

In Brazil, 99% of the 2022 crop is now harvested. As we can see from the harvest calendar below, Brazil is soon entering the blooming phase for the 2023 harvest, which requires more evenly spread rain for good flowering. Weather forecasts are announcing more healthy precipitation in October and the 2023 cherry growth season. Over the past month, we have seen increased arabica exports at above-average rates despite the higher differentials, resulting in rising destination coffee stocks.

On the robusta side of things, referred to in Brazil as conilon, the exported volumes have decreased compared with previous years. This drop in volume implies Brazil is shifting their blends from low-grade arabica to cheaper Robusta. Domestic business is sluggish, though, as producers aren’t accepting adjusted lower prices for their cherries. However, the weaker BRL currency has helped internal prices not to fall even more.

In general, diffs remain stubbornly strong, despite a rise in the underlying futures market. But in Colombia, the ‘softening’ of the diffs continues as Excelso EP offered +75 coming off +80 previously. Premium qualities still fetch high premiums as well as certified coffee. In south Colombia, 70% of the Nariño crop is completed, and a ‘mitaca’ crop will follow in November. In neighbouring Tolima and Huila, coffee flow is good. Excessive rains have finally eased in the coffee axis (midlands) but still cause problems, slowing down the main crop. Early pickings have started in the North, but rain is also complicating harvest in this area.

By the end of July Nicaragua had exported 2.2 million 60 kgs bags for this crop. Expectations were high as farmers have been investing in their fields for the last two years and if current trends continue they should find a resting place of 2.45 million bags this year. That would be around 3% higher than the 20/21 crop. Multination companies make up just under 60% of the exported volume which is in line with previous years. Diffs are currently around +45 c/Ib. 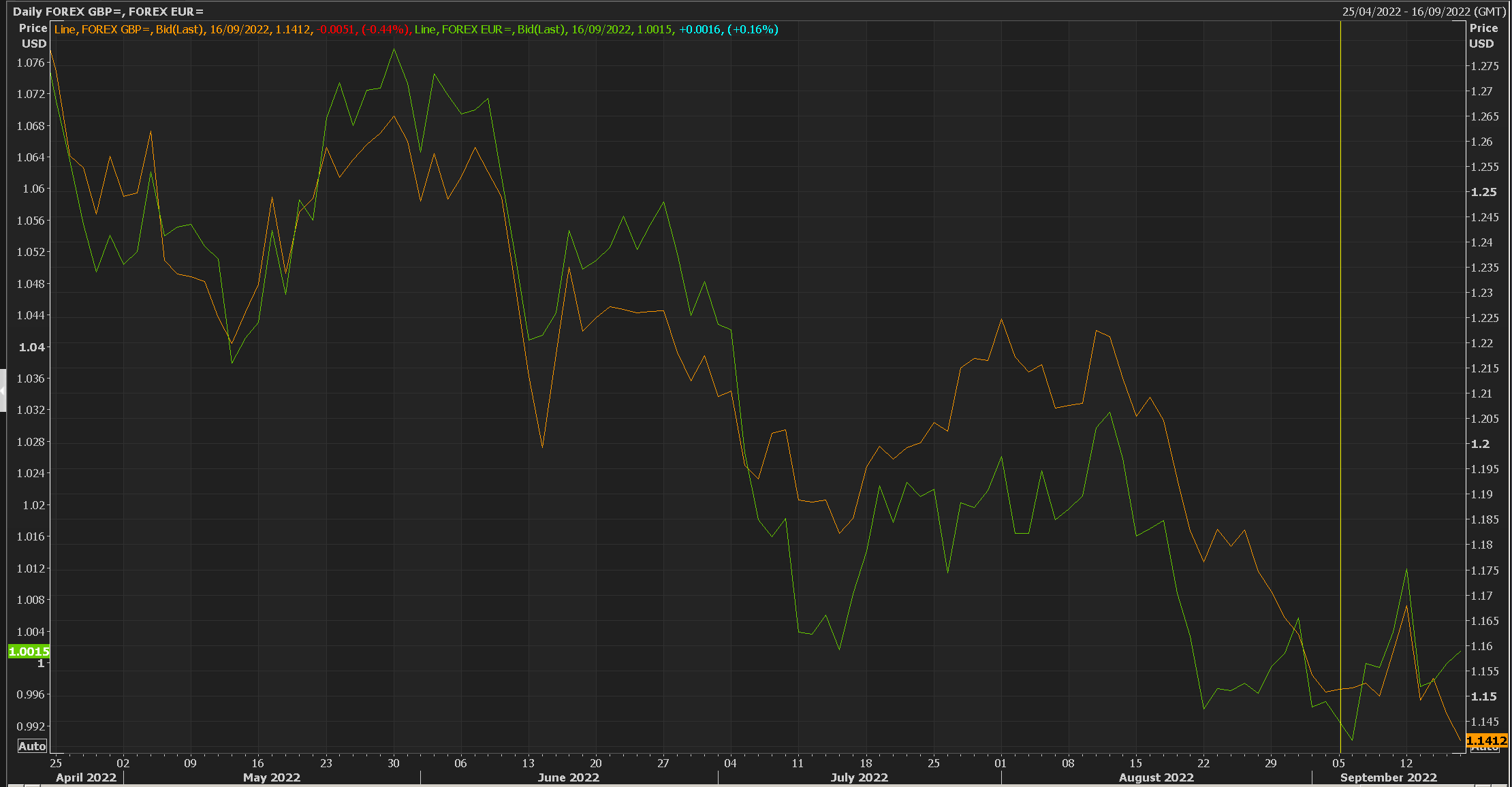 Last week’s big macro news was that inflation in the US came in hotter than expected: August’s headline CPI number came in at 8.3% YoY growth. This was down from 8.5% in July but the market consensus was that it was going to be closer to 8/8.1% and this spooked the markets somewhat. With inflation still running riot, the hawks at the Fed will surely decide to maintain an aggressive rate hiking policy at the Open Market Committee later today (Wednesday). 50-75bps looks likely but if we see 100bps, the sell-off that has ensued since the 8.3% figure was released will likely quicken. The US Dollar Index continues to soar and is at 20 year highs. Will “the cleanest shirt in the laundry basket” continue to remain strong or could we see the Euro, Pound Sterling and Japanese Yen claw back some value? Certainly, the current Hawkish lean of the Fed will keep the Dollar strong. This is bolstered by the fact that Europe is slowly edging closer to a recession; the closely watched purchasing managers index suggests the euro-zone economy shrank in August and this is predicted to worsen as we approach winter. As they say in Game of Thrones, “Winter is coming.” Putin’s gas strategy may not be as scary as white walkers but it certainly will continue to damage Europe over the winter period and perhaps well into the end of 2023. An energy source pivot will take time and with the Fed signalling there will likely be more rate rises in 2023, we may see the Dollar strong for the medium term. The Euro finished our reporting period worth less than the Dollar and the Pound was valued at 1.141.