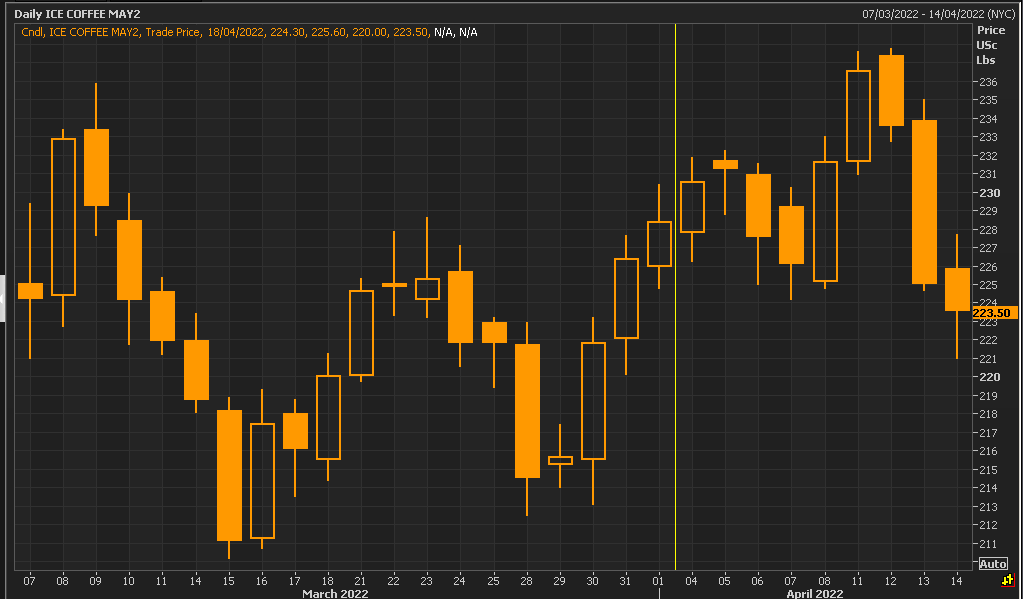 The NYC market opened on the 4th April at a level of 227.80 c/Ib, a value which just nowadays seems fairly ordinary, but ten months ago would have been almost unfathomable. This proved to be the last day of a week-long uptrend driven by the technical outlook and less adversity to risk concerning Russia and Ukraine. The recent rally meant that the market was due a pull back, which commenced on the 5th April after touching over 232 c/Ib, which caused further speculative sell off. Commercial traders were slow over the next few days as many were making their way to Boston for the SCA conference. A strengthening dollar also helped drive the downward movement across a range of commodity markets. However, the downward pressure only took it so far and it bounced up from 224.20 c/Ib on the 8th April. Passing the previous resistance level of 232.20 c/Ib, sights were set for 240 c/Ib. The period high of 237.75 c/Ib was claimed on the 13th, but the approach of the Final Notice Day for the May contract resulted in the switch’s pulling the price down. Wednesday 13th saw a drop of 8.80 c/Ib from open to close. The period low hit 221.00 c/Ib and closed out at 223.60 c/Ib on the 14th.

The CFTC’s COT report with the cut-off Tuesday 5th April saw the non-commercials change direction from their run towards a flat position, and they upped their net long position by +7,661 lots to 23,395 lots. The commercials extended their overall short position to -68,086 lots. Overall, OI grew slightly to 282,689 lots.

In the CFTC’s COT report with the cut-off Tuesday 12th April, we witnessed the non-commercials go longer to 29,617 lots, and the commercials go shorter to -74,627 lots. There was a larger swing in overall OI during the week, and it came down to 258,918 lots.

Certified US Arabica stocks remain the same level as March, at 1.08 million bags, still far below the 10-year average. Robusta certified stocks dropped from the previous month to 1.56 million bags, the same number as in January 2022. 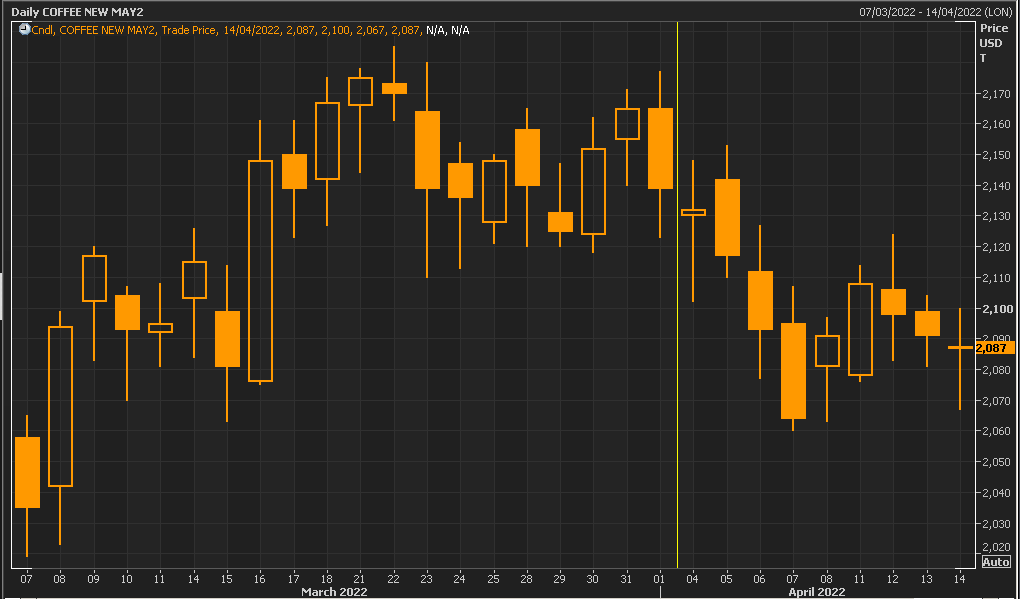 2,130 $/MT, it finally dropped out of the range set on the 23rd March. This showed the potential for prices to fall, and despite closing slightly higher, in the end the mood was set. After touching the period high of 2,153 $/MT on the 5th, thus began a downtrend over the next three sessions, closing on the 7th April $1 above the support level of 2,063 $/MT. Price action was strong-armed by origin selling and then specs jumping on the shorts to gain from the downward movement. The approach of FND brought about a slight resurgence in prices on the 8th and 11th, but this didn’t gain significant traction, and the market slid to a close of 2,087 $/MT on the 14th April.

The Colombian 2022 crop is predicted to be down from previous production highs of 14 million bags, to 12 million bags, with 60% of this coming through during the main harvest. During 2020 there was an issue with 1.5 million bags being double sold, which naturally resulted in some defaults (not from our suppliers, it should be said). Exporters will have learned from these mistakes, and so despite the lower crop numbers, many are hoping that these issues won’t reoccur. Supply pressures naturally show diffs to the upside as demand remains firm. The differential between the Colombian Milds and other Milds has increased for the eighth consecutive month.

The Costa Ricans saw their harvest finish up about a month ago. Most reports indicate that the crop is down 6-10% from last year, but some regions have seen an increase of 8% and quality slightly up. Many producers are selling forward, and as much as 40% of next year’s crop has already been contracted. One of the reasons for this is the need to provide contracts as proof to gain finance from the banks. This allows the exporters to pass on this prefinance to the farmers, who can use these funds for coffee and other farming activities. The farmers then pay back the finance in the form of cherry deliveries when the harvest rolls around.

Ethiopia has, for a while, faced challenges with rebel groups controlling areas in the west of the country, making coffee transportation difficult and dangerous. This prevents exporters from selling forward from these areas, as going short is too risky. One method for mitigation is to use trains where possible, rather than trucks, as this reduces the chances of the coffee being stolen. As well as this, some exporters choose to stuff the containers in the coffee regions, so it can go directly to port, rather than via Addis Ababa. The rebels have added to the already slow logistical issues caused by global shipping. Some exporters are opening offices in Kenya and Djibouti in an attempt to smooth out shipping issues for themselves. 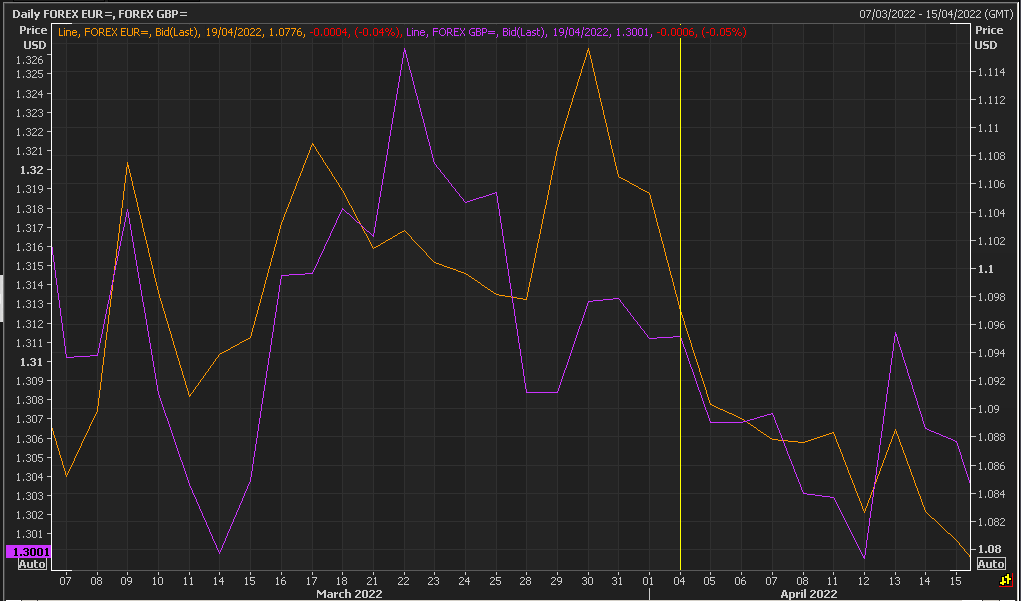 NB: Values on the Y axis are in US Dollars. Therefore, a rise on the graph, means a weakening in value of the of US Dollar, and an increase in the value of either the Pound or Euro.

Both GBP and the Euro started the period losing value against the Dollar. The 4th April marked a new period of DXY Land Delight, and I’m not talking about the newest country music album, but rather the US Dollar Index climbing above 100 for the first time since May 2020. The Sterling and the Euro opened at 1.315 and 1.096, respectively. USD has been gaining momentum from expectations of an aggressive policy tightening from the Federal reserve to tackle inflation. The Euro fell harder than the Pound as promises of further sanctions against Russia weighed heavy on the single currency. As the war continues, the chance of a recession in Europe grows. The UK has seen a drop in manufacturing during the first quarter of 2022, and house prices increase for the ninth consecutive month. This loss of value continued until the 12th April when £ dropped to 1.30 and the € to 1.083. Both currencies picked up as UK inflation figures came in at 7%, driving hopes that interest rates will also rise further, and polling in France showed Macron came on top. However, the surges for both European currencies were only brief, and the Euro closed the period at 1.089 and Sterling at 1.303.

We hope you enjoyed this report, and we will see you in two weeks! Until next time coffee folks! 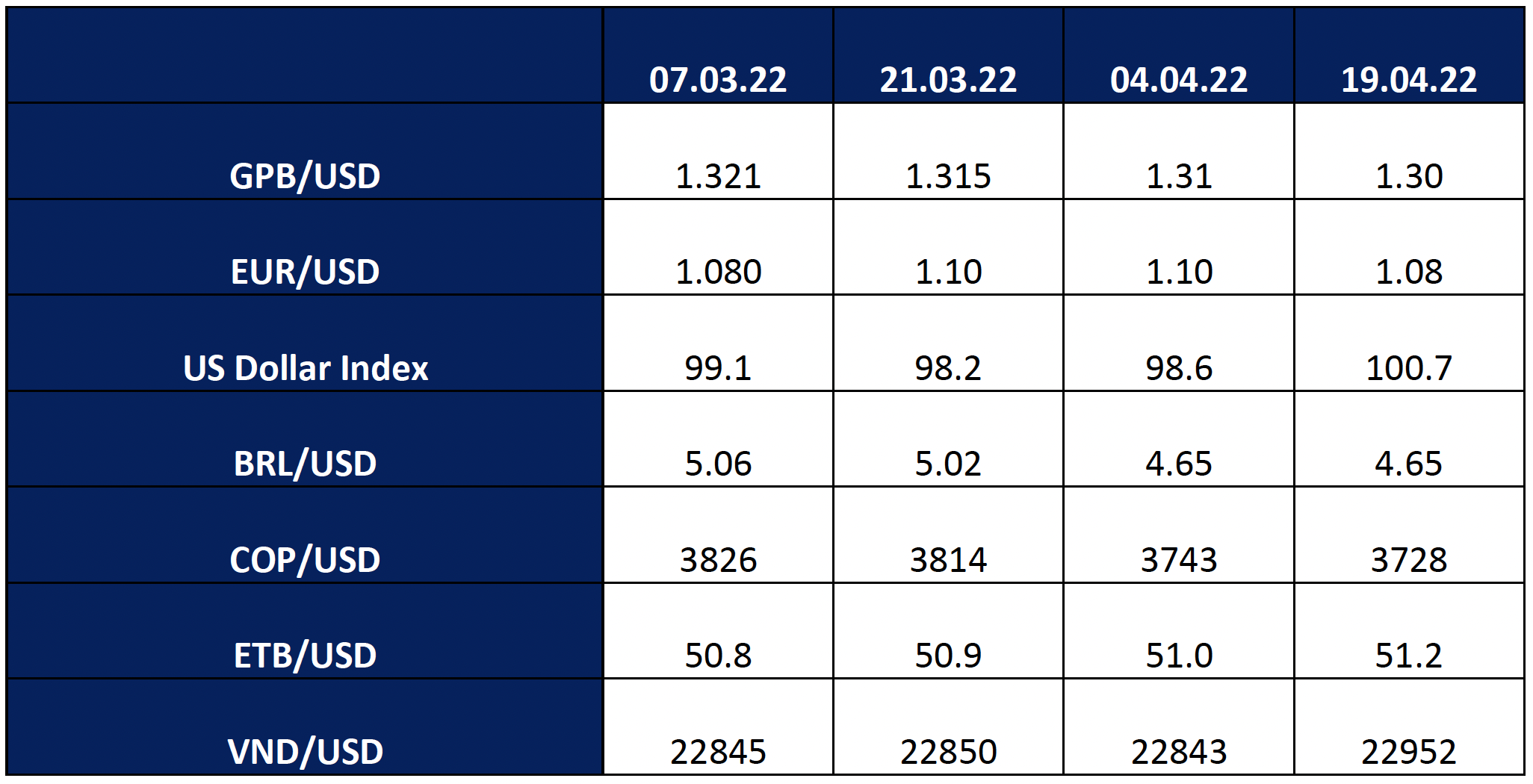