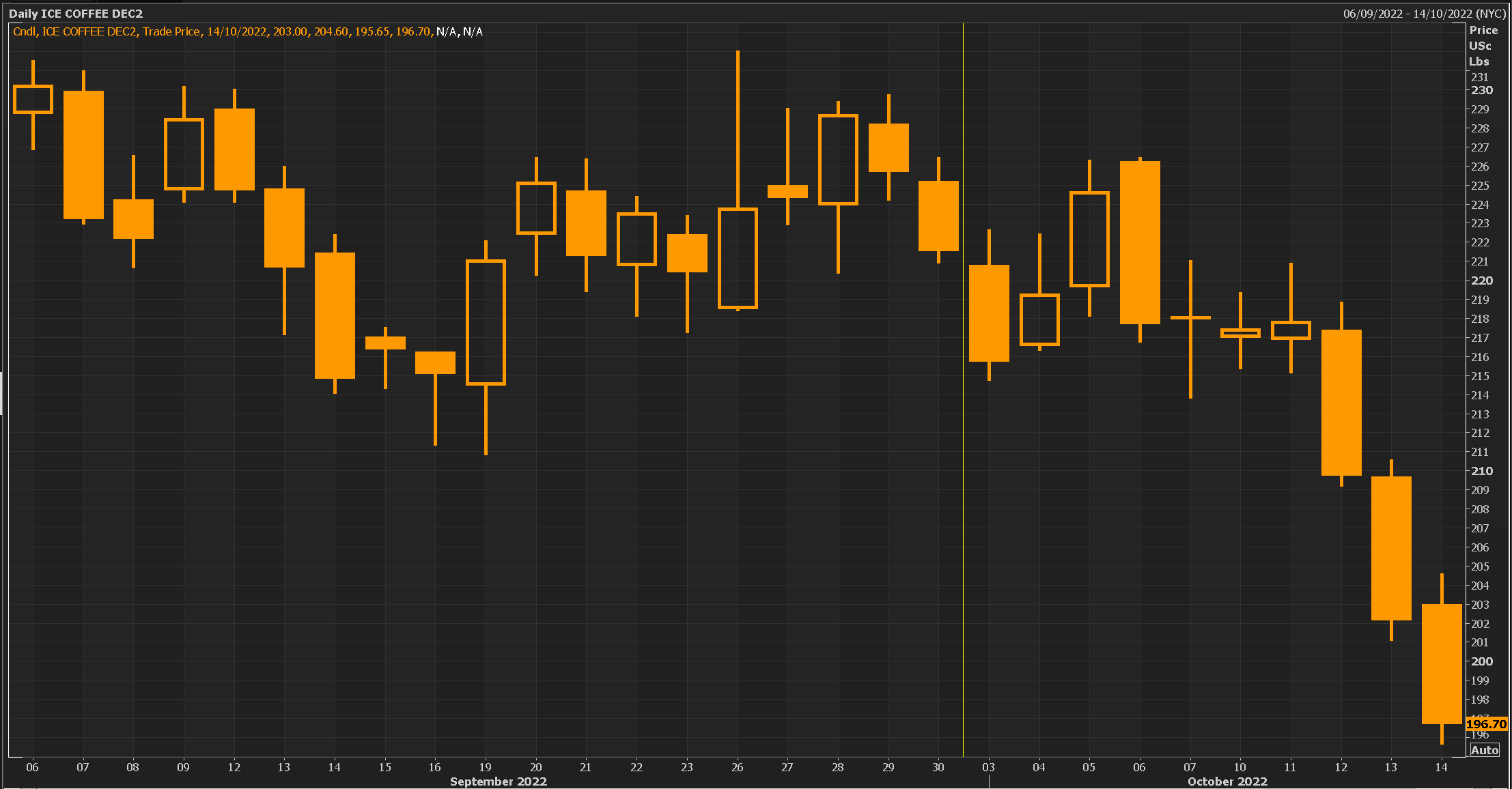 On Monday 3rd October we witnessed a continuation of the downward movement that began at the end of September as forecasts of adequate rainfall in Brazil circulated. We opened the period at 220.80 c/Ib and fell over the course of the day to close at 215.75 c/Ib. This bearish sentiment reversed when production statistics from Colombia and Honduras announced drops in production and exports. Honduras claims to be 20% down in the 2021/22 season compared with the previous year. As faith in the wider commodities and equities market also gained traction, we saw the period high of 226.45 c/Ib claimed on the 6th of October. This sharply fell off by the end of the session as worries about US unemployment rates and the geopolitical risk North Korea poses entered the fray. Despite the 7th pulling the NYC in both directions, it settled only 0.15 c/Ib higher than where it began. The next two sessions allowed for sideways market action and the real moves were felt from the 12th. Opening at 217.40 c/Ib the December-22 contract had lost 20.7 c/Ib off its price by the close of play on Friday 14th. This represents a 9.5% fall. The initial cause of the decline in price, was Brazilian exports from September recording a 7% increase from the same month in 2021. Over the following sessions it was exacerbated by the high costs of natural gas and cost of green coffee for roasters in Europe, as well as the diminished purchasing power of the Euro and Pound. As the downward pressure continued, the specs hit the floor and the next thing you know, shorting got low low low. We were just missing the boots with the fur. The NYC closed out below that psychological resistance level of 200 c/Ib at 196.70 c/Ib, the first time this has occurred since July.

The CFTC’s COT report with the cut-off Tuesday 4th October witnessed the specs slightly reduce their net long position down to 24,327 lots and the commercials reduced their net short to -68,941 lots.

The CFTC’s COT report with the cut-off Tuesday 11th October was a continuation of the movements from the previous week the specs reduced marginally to 23,874 lots and the commercials to -67,727 lots.

Certified US Arabica stocks further declined to 400,438 bags. Low certified stock numbers may have the power to override other fundamental pressures and cause a rally on the NYC. 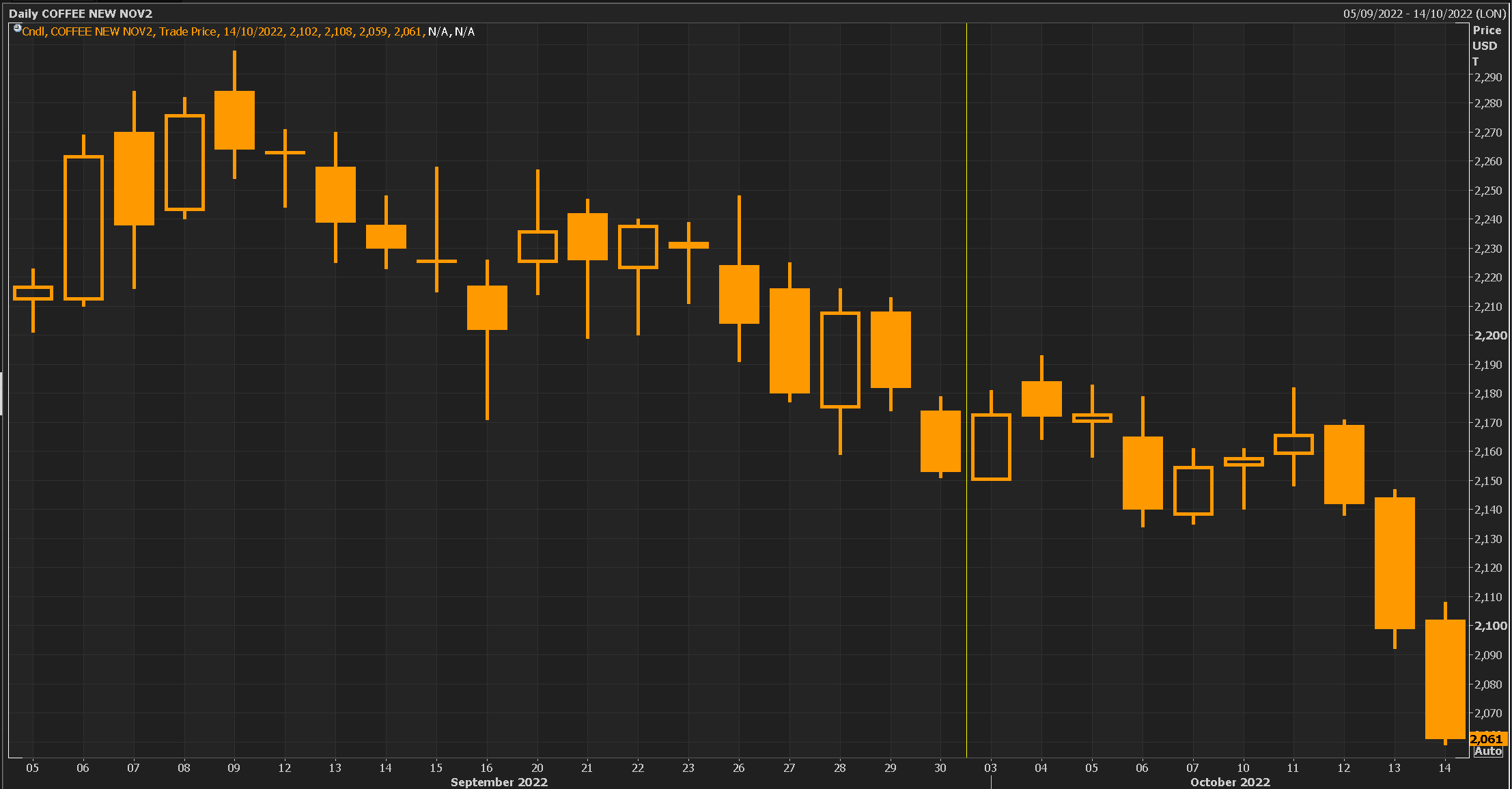 The London Robusta as it sometimes does, played a similar game to that of Arabica over the last fortnight but to a lesser extent. Coming off the back of bearish trend, it first demonstrated an unsettled period before joining the rapid downward spiral. It kicked off the fortnight at 2,151 $/mt and low trading volume saw the period high reach a 42 $ higher at 2193 $/mt. From the 12th with the direct influence of the NYC prices came off over the next three days. Speculators saw the opportunity and looked to make gains through their shorts. The period closed out at 2061 $/mt, again breaking a psychological barrier of 2100 $/mt.

Brazil, has been experiencing standard October weather so far, with some rain but also periods of warm air blocking out cold fronts. Although pressures have eased from earlier in the year some exporters are still finding their booking requests being rolled due to lack of space. Requests are being made to importers to provide their shipping instructions in advance and to negotiate with more than one shipping company. Brazil held general elections on the 2nd of October with the current president Bolsonaro and Lula making it through to a second round which will take place on the 30th of October. This has contributed to the coffee markets high volatility over the last couple of weeks as it changes the Brazilian FX markets. Brazil has seen its differentials continue to fall since August now.

Colombian weather forecasts remain positive for the main crop harvest as another week of rain should aid the maturation of the cherries. This is one of the reasons helping to bring Colombian diffs down, in some case as much as 12 c/Ib. Exports in September were down from the same month a year ago, production from January to September 2022 fell by 10% to approximately 8.2 million bags.

The new crop kicked off in Vietnam in October as favorable weather sped up ripening. In the lowland areas, farmers have picked around 20%. Market action surrounding Robusta has been slow recently but as the processing begins and coffee gets bagged, this will speed up. As the cost fertilizers has climbed by almost 70% since last year some farmers are choosing to replace their coffee with alternative crops. In some respects, it’s lucky that we are in a high price environment otherwise many more farmers may be choosing to do this. 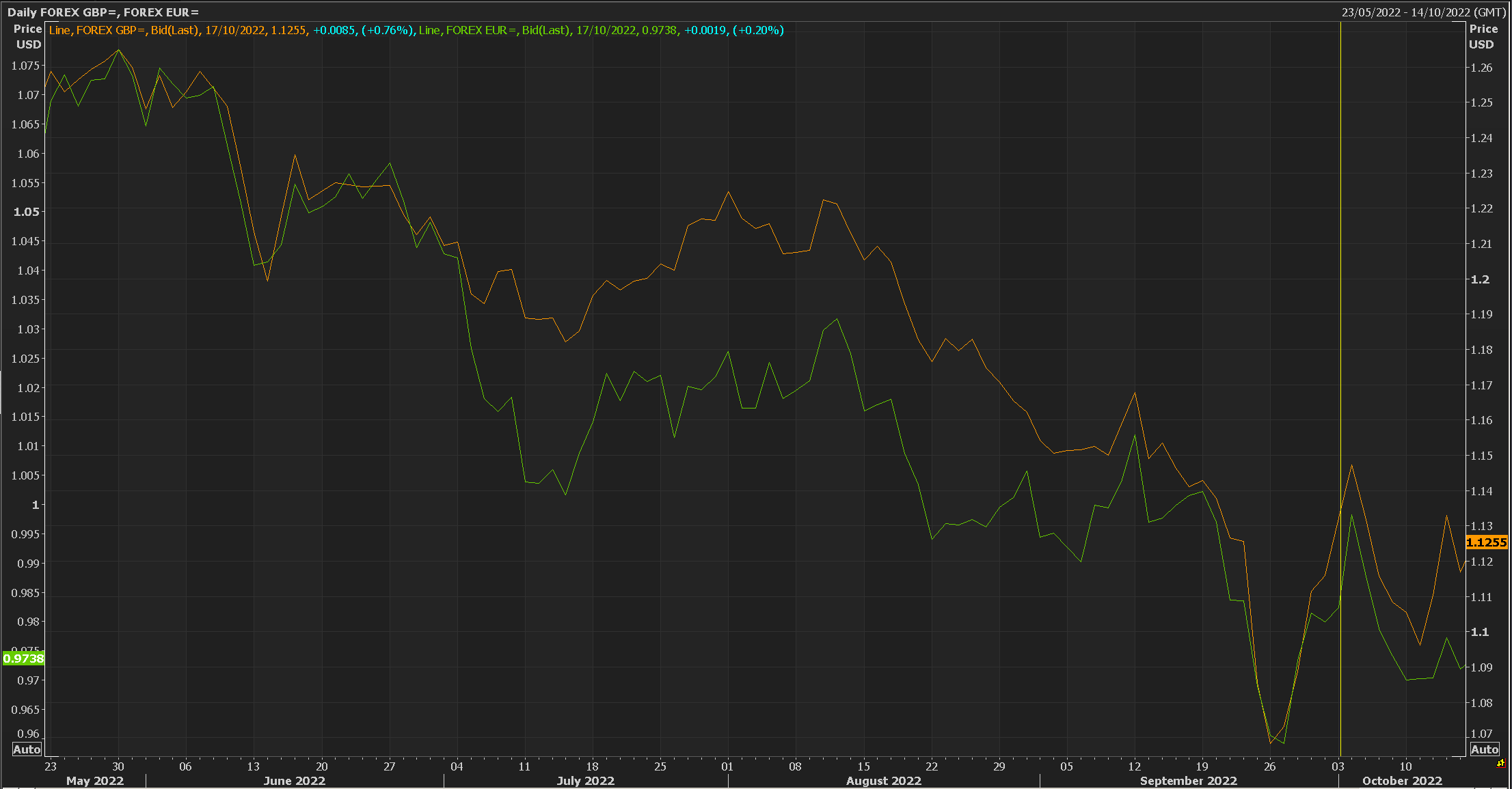 It’s been a turbulent couple of weeks in the macro world after the announcement of the mini-budget by Kwasi Kwarteng sent the financial markets into a spiral. An awkward backtrack stating that many of the plans set out in the min-budget were going to be reversed, although embarrassing for those stating them, did allow Sterling to regain some strength against the Euro and the Dollar. On the opening bell of Monday 3rd October, the Pound would buy you just under 1.14 $. The Euro, still under pressure from the Russia-Ukraine war checked in 0.98 $. Although these levels are low compared with those seen in May, they did show an improvement from those acquired on the 26th September. Although the DXY has stopped dancing on the ceiling for the time being, the greenback did pull back some ground as the FED looks to remain hawkish in its stance on interest rates for the foreseeable future. A comment was made that it could reach 4.5% by the end of the year. This caused the Sterling to soften despite positive data releases of shrinking UK unemployment levels. On the 11th the value dipped back below 1.10 $ but this wasn’t to last long. Fresh gains were made by Sterling at the tail end of the week as Kwasi Kwarteng was dismissed from his role which left it in a slightly more respectable position of 1.12 $. Questions have been asked about how long the Prime Minister can remain in her job as well. The Euro is still left wanting, closing the period out at 0.97 $.