Good day. Welcome to the DRWakefield Fortnightly Market Report. This fortnight we’re covering the period Monday 2nd May to Friday 13th May. 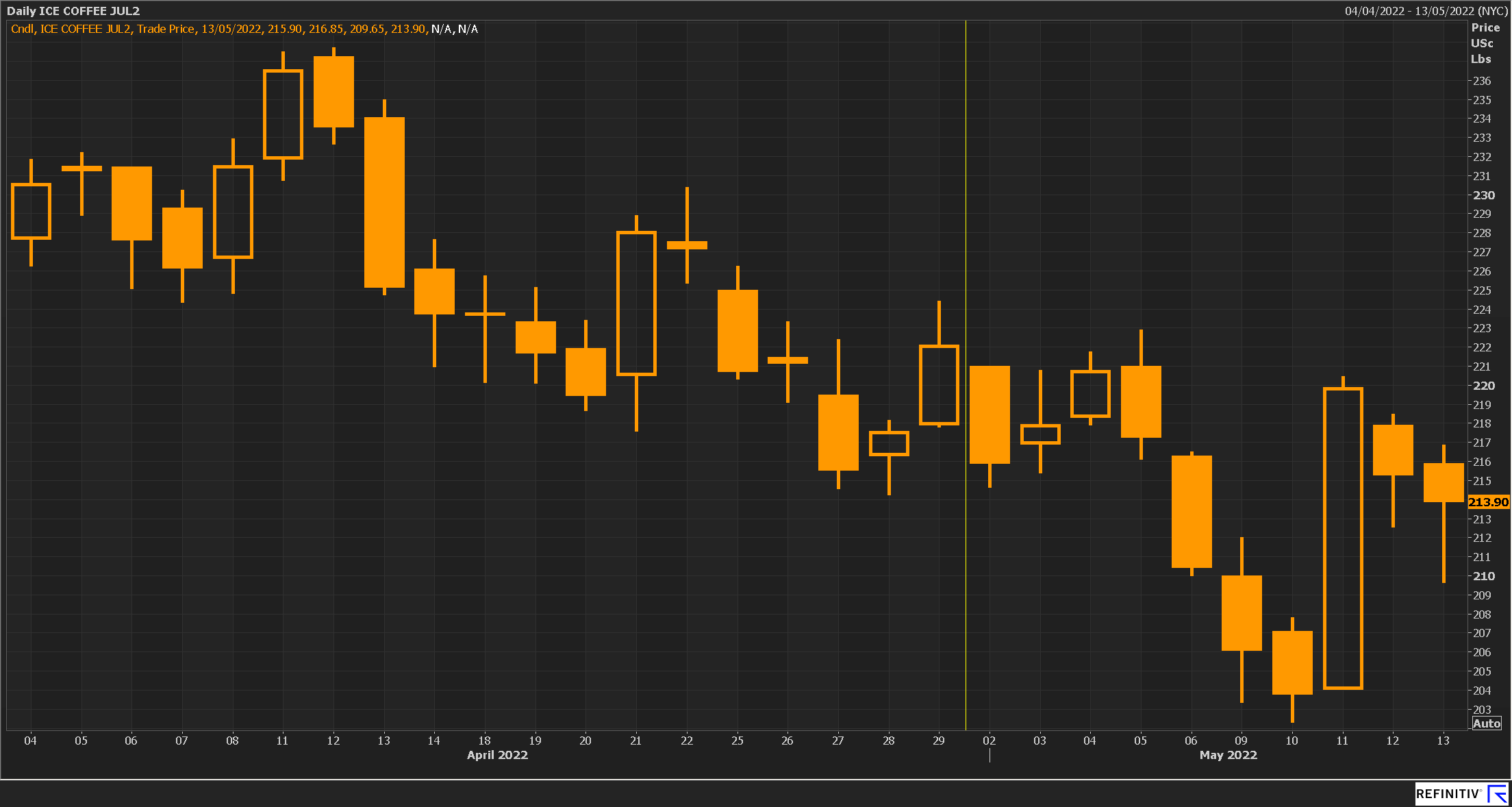 Monday 2nd May opened trading at 221 c/lb and dropped over 3% as downside momentum triggered some selling. But the move was not supported by significant volume or commercial participation, and we closed at 215.90 c/lb. The days that followed traded in a narrow range, and on Thursday 5th of May we hit the fortnightly high of 222.90 c/lb. This was not to last, however, and on Friday 6th we closed at 210.45 c/lb.

Would we go below 210 c/lb? That was the question in many people’s minds on Monday morning May 9th. That question was quickly answered, and during the next day, we hit the fortnightly low of 202.30 c/lb. There was a strong risk-off sentiment and it took coffee with it; the Bloomberg Commodity Index, an index of all the major commodities, went down 4.3% and negative news surrounding China’s lockdown provided a gloomy trading climate. Wednesday 11th made everyone forget about the macro climate though. Talk of Jack Frost returned with predicted cold spells in Brazilian producing regions starting from the 19th of May. This spooked the market, with the frost-driven bull days of 2021 fresh in everyone’s minds, and there was a good deal of short covering that translated into a 16.40 c/lb trading range and the market closing at 219.90 c/lb, 15.75 c/lb higher than how it started. During the days that followed some value came off the board and we closed the week at 213.90 c/lb. Until we’re clear of this cold snap, it seems we’re in a weather market.

There was not much change in the non-commercial’s position in the CFTC’s COT report with the cut-off Tuesday 3rd May. They trimmed 582 lots to total a Net Long Position of 21,858 lots.

They did not stay quiet for long, however, and in the next COT report (cut-off Tuesday 10th May), they slashed 8,486 lots from their position, which left them 13,372 lots Net Long, the shortest Net Long position they have occupied in many months.

Certified US Arabica stocks are well below the 2-, 5-, and 10-year average, standing at 1.12 million bags. The 2-year average is the lower number of the averages at 1.92 million bags. If we are going to get close to that number, what origin is going to provide the physical? With Brazil’s harvest on an off-year, much attention will be placed on Peru’s numbers and also the upcoming Central American crop. 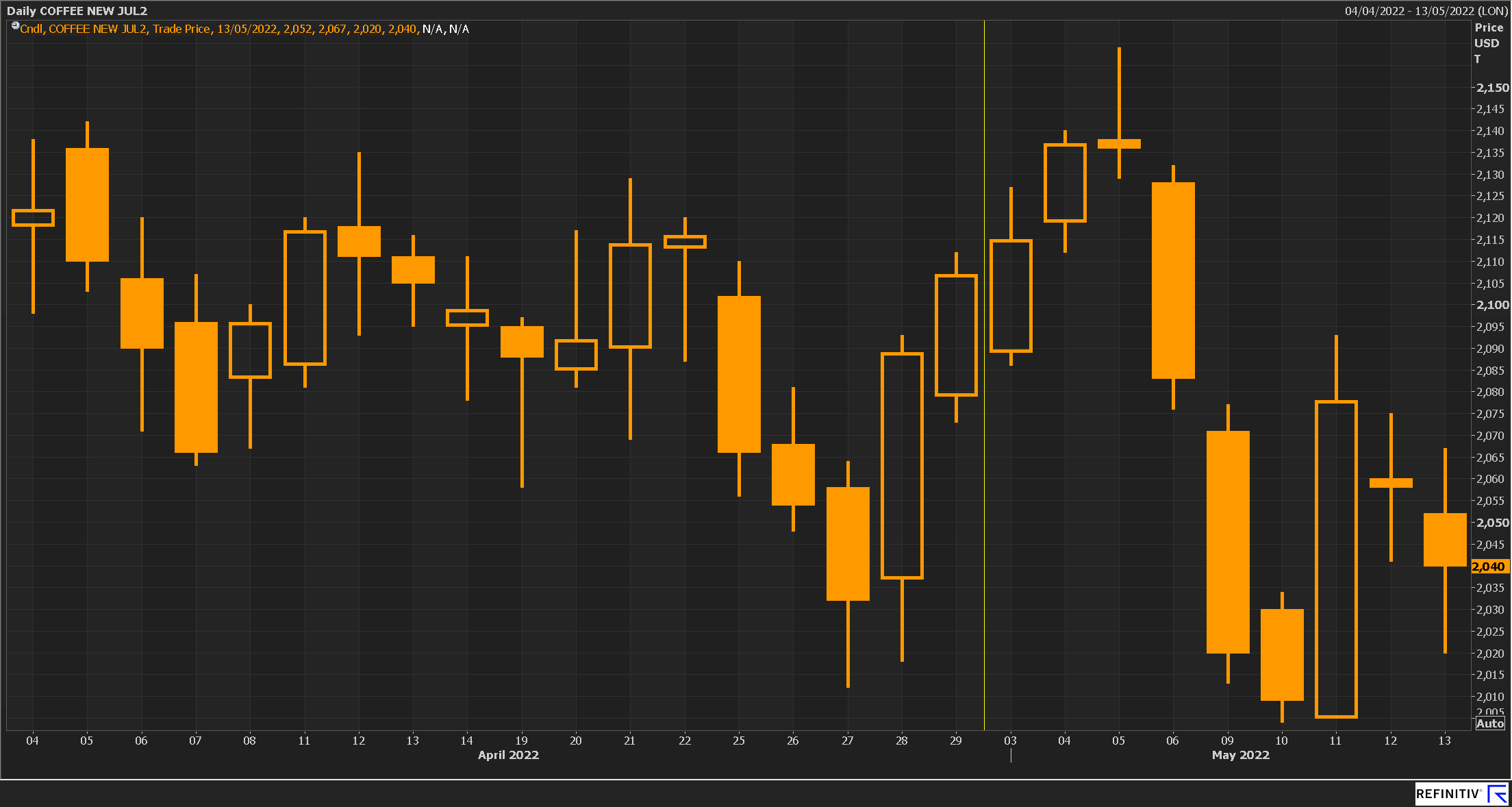 The Robusta market opened at 2,089 $/mt on Tuesday 3rd and continued its ascent from the previous week. It hit a fortnightly high on Thursday 5th of 2,159 $/mt, and then took a bearish turn on Friday. Like Arabica, it continued this slide into the following week before the raging bulls took centre stage on Wednesday; the market gained 73 $/mt over the course of the day and closed at 2,078 $/mt. The bulls then retreated into their pens, and the next day the market ticked downwards to close at 2,040 $/mt.

Some Honduran exporters and cooperatives report that this crop has been the most atypical in memory. Physical deliveries to mills have been choppy, and it’s reported that there is still a significant volume of physical in the hands of producers and middlemen who are waiting for the market to rise to 235-240 c/lb; when we last saw the market at this level, there was a big sell-off in conventional and Rainforest grades. The Rainforest platform MultiTrace continues to cause some exporters problems as they struggle to register sales on the platform. It seems the transition from UTZ to RFA has thrown up a number of teething problems that will take a few months to resolve. Initial data suggests this crop is around 15% smaller than last year’s. In spite of this crop reduction, exporters are still struggling to get coffee shipped as container shortages dampen the coffee flow.

Container shortages are also a problem for Nicaragua, and this will lengthen the traditional shipping season. The crop did start earlier than normal, so a good amount of physical departed in December and January, but the pace of exports slowed in February. While it did pick up in March, the industry sentiment suggests problems remain.  Current crop offers are hard to come by, and the focus is on fulfilling current contracts as quickly as possible. Nicaraguan cooperatives, more than other Central American groups, struggled to get pre-finance from banks last year due to the unfavourable regulatory changes enacted by the government in recent times. The higher market does boost producer profits but could make it harder to secure pre-finance for the next harvest as the sums will be much larger as a result of this high price climate.

Vietnam was the first origin where DR Wakefield started to see increased freight rates in 2021. Rates soared to eye-watering levels and remained at these lofty heights for a few months. Rates are still higher than they were this time last year, but they have come down to more manageable levels and shipments have normalised. Farmers have sold around 75% of the current crop and many feel bullish about the next crop. In a period of soaring costs, Vietnamese farmers have enjoyed a lot of rain, which has seen reservoirs and water levels rise, reducing the need for irrigation. The adequate supply of rain has supported good flowering and there is talk of a 30-million-bag 2022/23 crop. 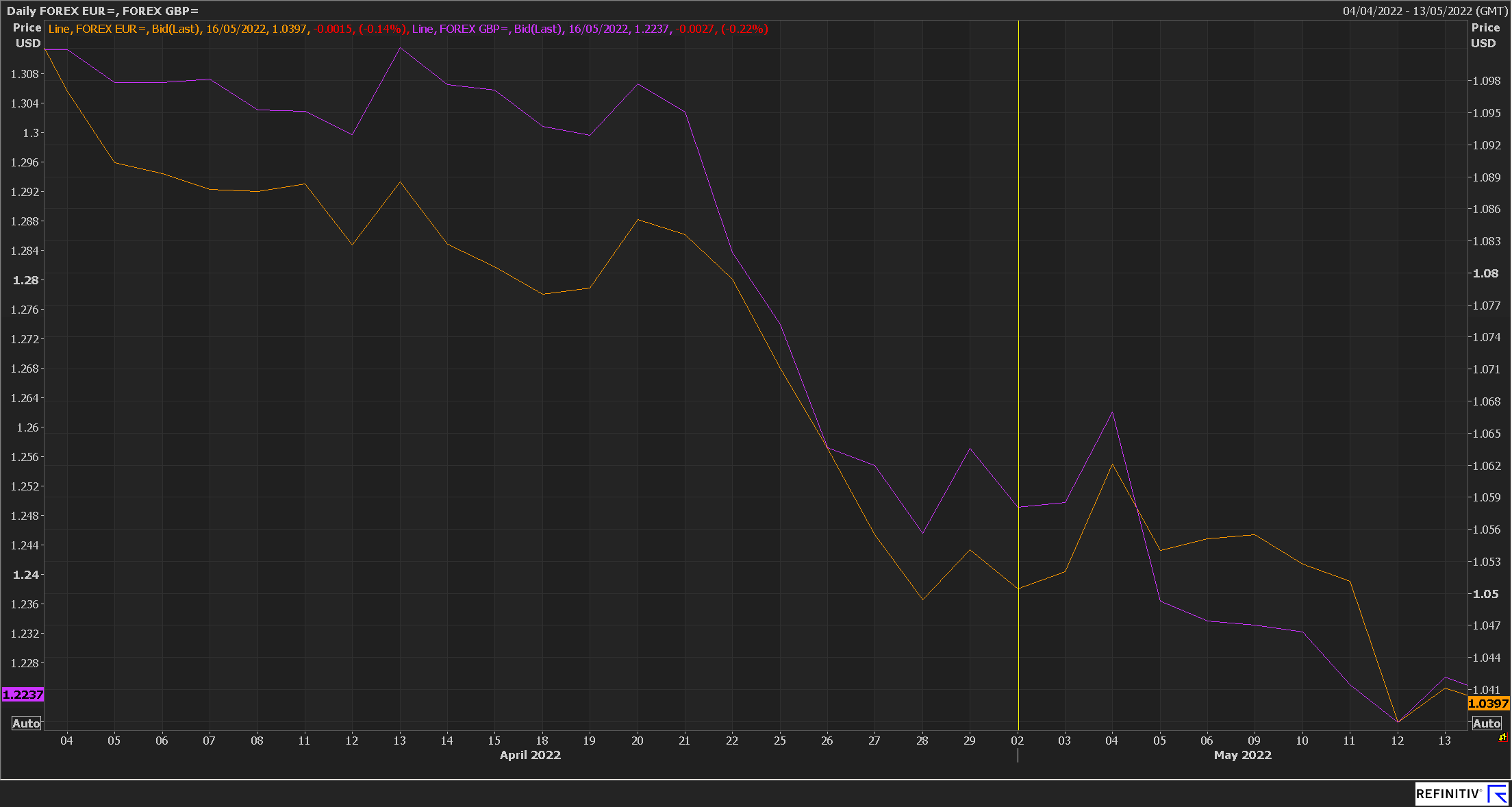 The Dollar reigns supreme, all hail the Greenback! It’s at 20-year highs and is only going in one direction. Inflation and interest rates continue to dominate the narrative. Inflation appears to be stickier than expected across all major economies and indicators. The release of the new Consumer Price Index (CPI) was the big news on the macro front last week. CPI measures the price of a basket of goods that are commonly consumed by society and then compares the price of this basket compared to a year ago. This is converted into a percentage and gives us an estimate of how much inflation society has experienced in the last 12 months. However, is CPI a valid indicator anymore? If you look at the chosen basket of goods that a ‘typical’ consumer consumes, some will argue that it is not representative, and the tweaking of the methodology perhaps understates inflation. What everyone can agree on is that inflation is high and is set to persist in the medium term.

Why is this important? It has triggered Central Bankers in the US and UK to raise interest rates by significant basis point margins—check out our market report terms to find out what basis points are. Last week, The Fed raised rates by 50 basis points to a range of 0.75-1% and the BoE raised rates by 25 basis points to 1%.  Generally, when Central Banks raise interest rates, currencies appreciate. While the BoE’s rate rises have stymied the Dollar’s surge, in this risk-off climate everyone wants Dollars, and the Greenback is still leaping like a salmon out of the river. 6 weeks ago, GBP was trading at 1.30 and it finished our reporting period at 1.22.

In contrast to Pound Sterling, the Euro has lost more value against the Dollar and a big reason behind this is the ECB’s hesitance to raise interest rates. However, we heard the first musings of a predicted rate rise towards the end of last week, so this could change soon. EUR/USD was at 1.10 6 weeks ago and finished our reporting period at 1.039. Could we see Euro/Dollar parity?

The bottom line is that the inflation is high, the Dollar is strong, and the Pound is faring slightly better than the Euro. 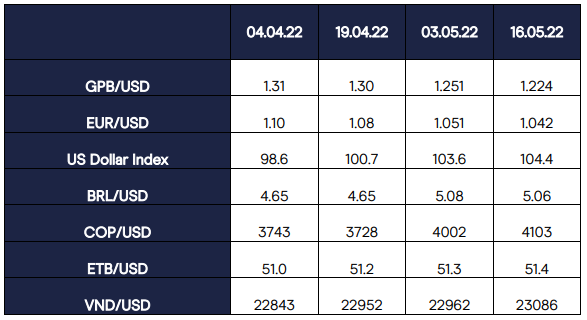