Good day. Welcome to the fortnightly DRWakefield Coffee Market Report for the period covering Monday 1st of November to Friday 12th of November. This report touches upon the Arabica and Robusta coffee futures market, currency pairings and news from origin. For clarity on any terminology used in the below coffee market report, see our Market Report Terms page. 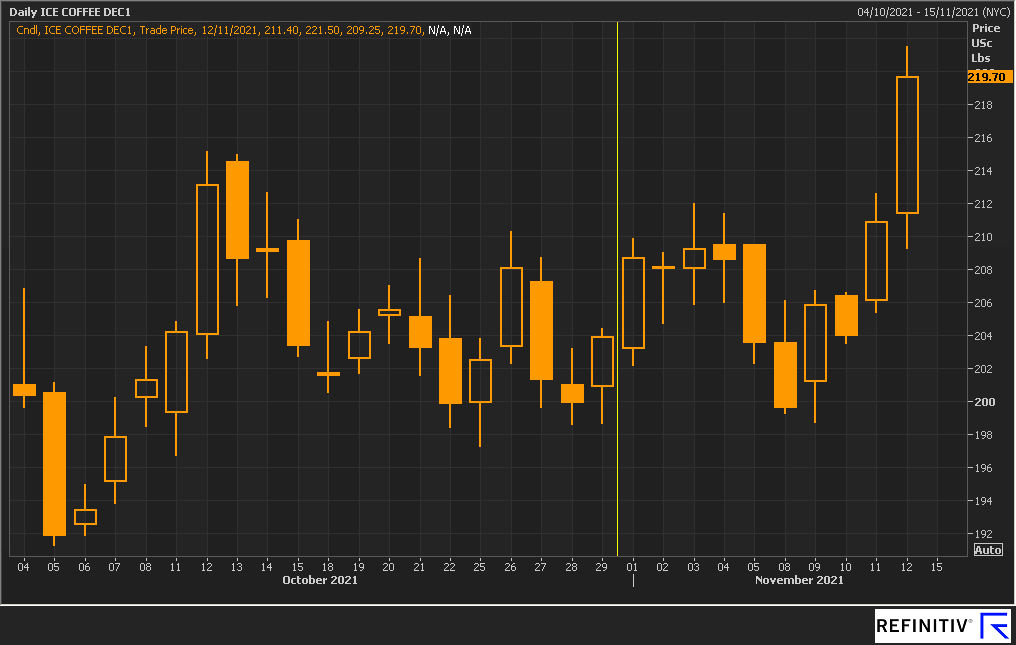 Arabica futures opened Monday October 4th at 203.20 c/lb. The daily range was 7.65 c/lb, and although it does look like a large daily range on the graph above due to the presence of other sizeable daily ranges (most notably October 12th and November 12th, the latter of which we will touch on later in this report), it was a busy day’s trading. Sizeable daily ranges have become commonplace in the coffee market. If we track back to this time last year, a daily range of nearly 8 c/lb would have stuck out like a sore thumb. Daily moves have more momentum, and the increased volatility means the market can be trading at significantly different levels from one day to the next. As ever, much chat centred on weather in Brazil and the predicted shortfall of next summer. There are still considerable differences in opinion as to whether the shortfall is fully priced in or not, and this caused some tentative trading midweek. We finished the week with a bearish day, opening at 209.50 c/lb and closing out at 203.55 c/lb.

The following Monday saw us reach the fortnightly low and close just below 2 Dollars. However, the market did not stay there for very long and, bar a breather on the Wednesday, the only way was up for the rest of the week. Friday 12th was the largest increase with a daily range of 12.25 c/lb and a daily increase of 8.30 c/lb. The uptrend was strengthened by a large swathe of options-related activity and our proximity to the first notice day for the December terminal. As we tracked upwards many of the physical players decided to close out their position before we headed up any further. We finished the week at 219.70 c/lb. The last time we were trading at this level was back in October 2014. 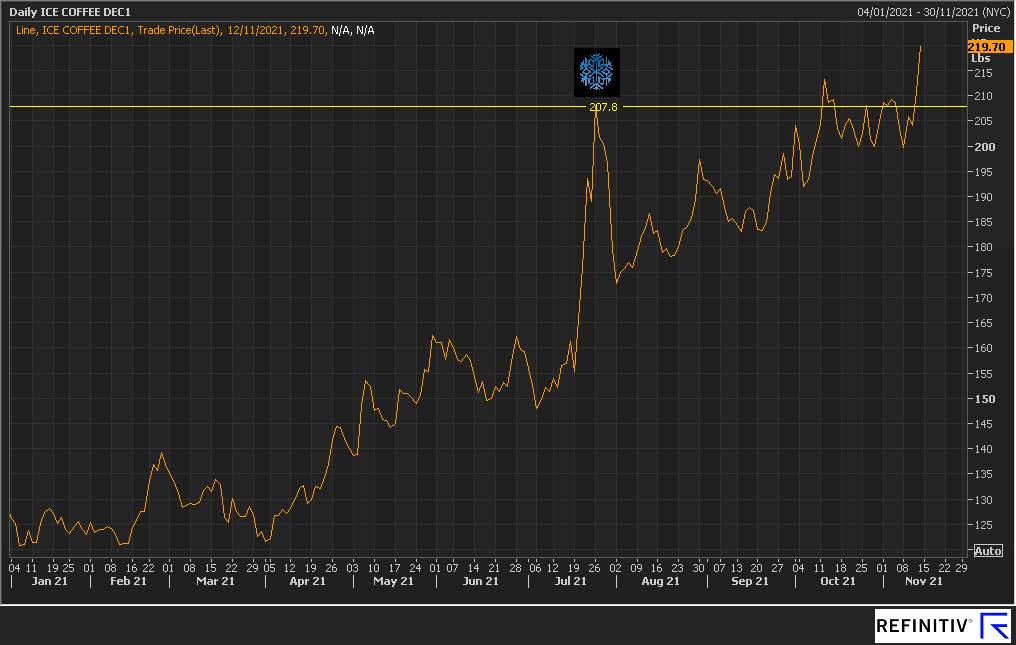 The frost-induced spike in July rightly gained the headlines, but as you can see from the graph, coffee futures had been steadily gaining traction for the preceding few months. We’ve mentioned many of the reasons behind the commodity bull run but we haven’t mentioned inflation for a little while now.

The Fed kept on saying that it was transitory and, even though it is still doing its best to downplay inflation, the data paints a different picture. Figures released last week showed that US consumer prices rose last month at the fastest pace since 1990, as the CPI increased 6.2% from October 2020, beating market estimates of 5.9%. The CPI also rose 0.9% in September, the largest gain for four months. In order to avoid another taper tantrum, the Fed committed to not raising rates until the tapering of its bond purchase programme is complete.

One of the main ways inflation can affect coffee futures is that more funds will pour into commodities as a hedge against inflation. With more funds invested in coffee, we could also see increased volatility. However, there is also the impact that inflation could have on the US Dollar. When the Fed does decide to raise interest rates, we will likely see the US Dollar strengthen and this may stymie the bull run as most commodity supercycles in the past have all coincided with a weak US Dollar. However, we are already at historic highs with a Dollar that is not considered to be very weak. Perhaps this relationship is no longer relevant?  What we can conclude is that this super cycle is not like the ones we have experienced before.

When you throw into the equation Covid-19, La Niña and the supply disruptions we all facing, the bulls certainly have the upper hand over the bears at the minute.

Certified US Arabica stocks continued to dip, sliding to 1.8 million bags, a figure we have not seen since March. The drawdown in October was the largest monthly reduction in stock since September 2020 and this is expected to continue amidst the delays caused by logistics issues across the globe. 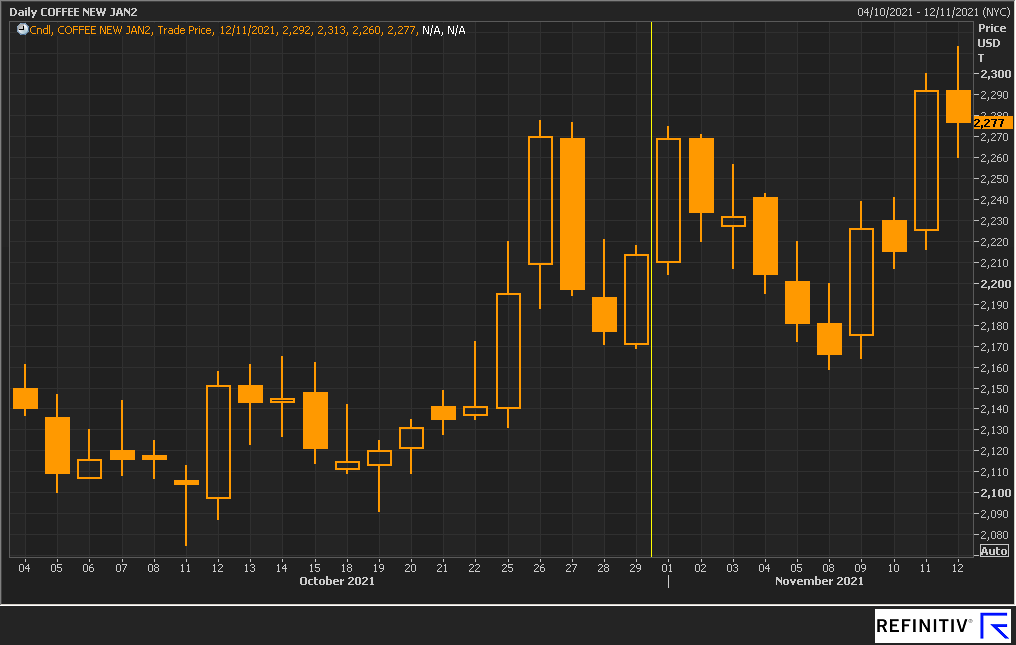 Robusta opened the fortnight at 2,210 $/mt and, after making some gains that Monday, spent the rest of the week trending downwards to a close of 2,181 $/mt on Friday 5th. This continued into the next week before reversing on the Tuesday. Thursday was the largest daily increase and Friday was noticeably quiet, with many market participants focussing exclusively on Arabica and its movements on that day.

In Brazil, the truck drivers’ strike at the port of Santos ended last week after a week’s standstill. During that period no coffee shipments managed to get through to the port and this exacerbated the logistics backlog we all face. Some exporters report that any new bookings are now only for January onwards.

The instability in Ethiopia continues and the Prime Minister, Abiy Ahmed, declared a six-month state of emergency as forces from the northern region of Tigray were gaining territory and considering marching on the capital Addis Ababa. Our partners out there are all safe and coffee harvesting continues unaffected.

In Vietnam, due to favourable weather, it’s expected that the 2021/22 crop will be very good. While this is fantastic news there are two major issues that could crash the party: manpower and logistics. Over the past few months, there have been stringent lockdowns across Vietnam but in October it hit Dak Lak badly. Given this area’s importance to coffee, this caused picking issues as many pickers could not travel around to harvest. Additionally, the shortage of shipping containers has not abated and bookings, if you can get them, often get rolled. It’s also prohibitively expensive to ship out of Vietnam with ocean freight sitting at a cost of 6 times the price we experienced this time last year.

While coffee prices across the board are indeed higher, we can also say the same for input costs. One of our export partners in Vietnam have data that suggests this is on average 6% up on last year. NB This is not origin-specific and is a common topic when we speak to our friends at origin. 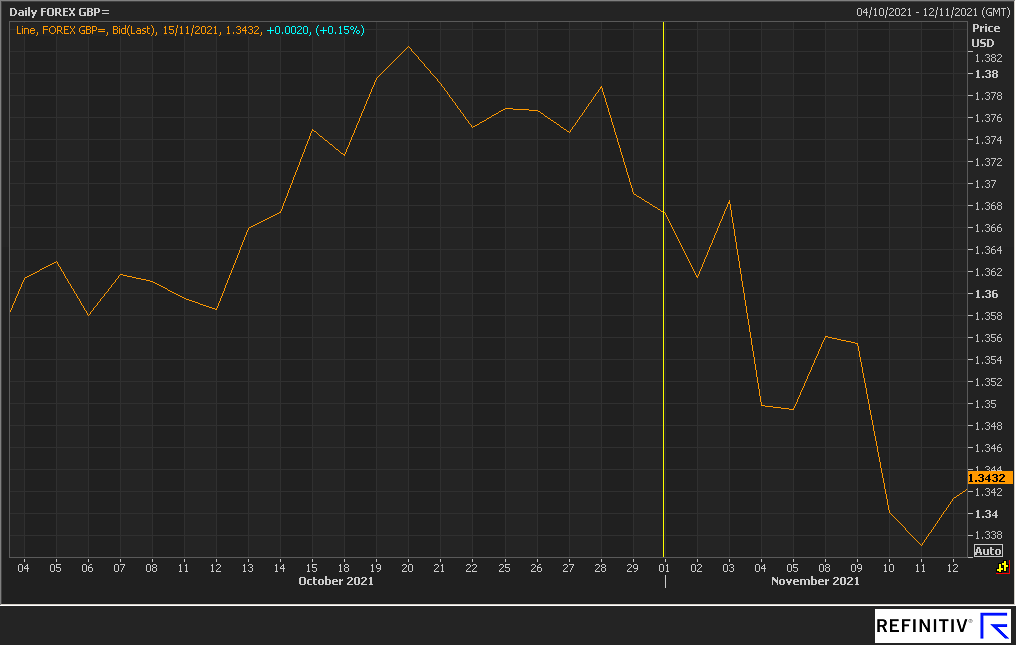 The Cable started the fortnight trading at 1.366 and could not hold off the US Dollar strengthening. Although there were periods of pullback, it was a bad fortnight for Pound Sterling and on the 11th of November it broke through the 1.34 support level reaching a yearly low. This was off the back of the US inflation data release and the comments from Biden afterwards stating that reversing inflation is a top priority for the administration. 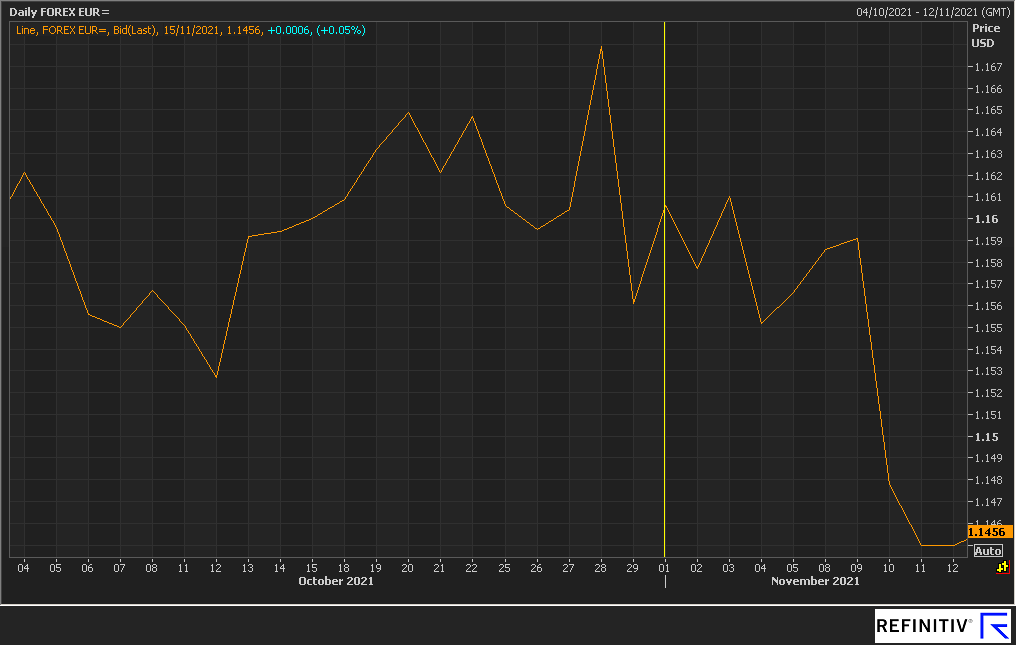 On Monday 1st of November EUR/USD opened at 1.161 and, like the Pound, lost value against the Dollar over the opening days of our reporting period. The pair largely mirrored the Cable’s movements, due to the changes in the US Dollar’s strength. Like Pound Sterling, the Euro took a beating after the inflation data release in the US. It finished our reporting period at 1.145.

We hope you enjoyed this report and see you in two weeks for the next one. Till next time coffee folks!