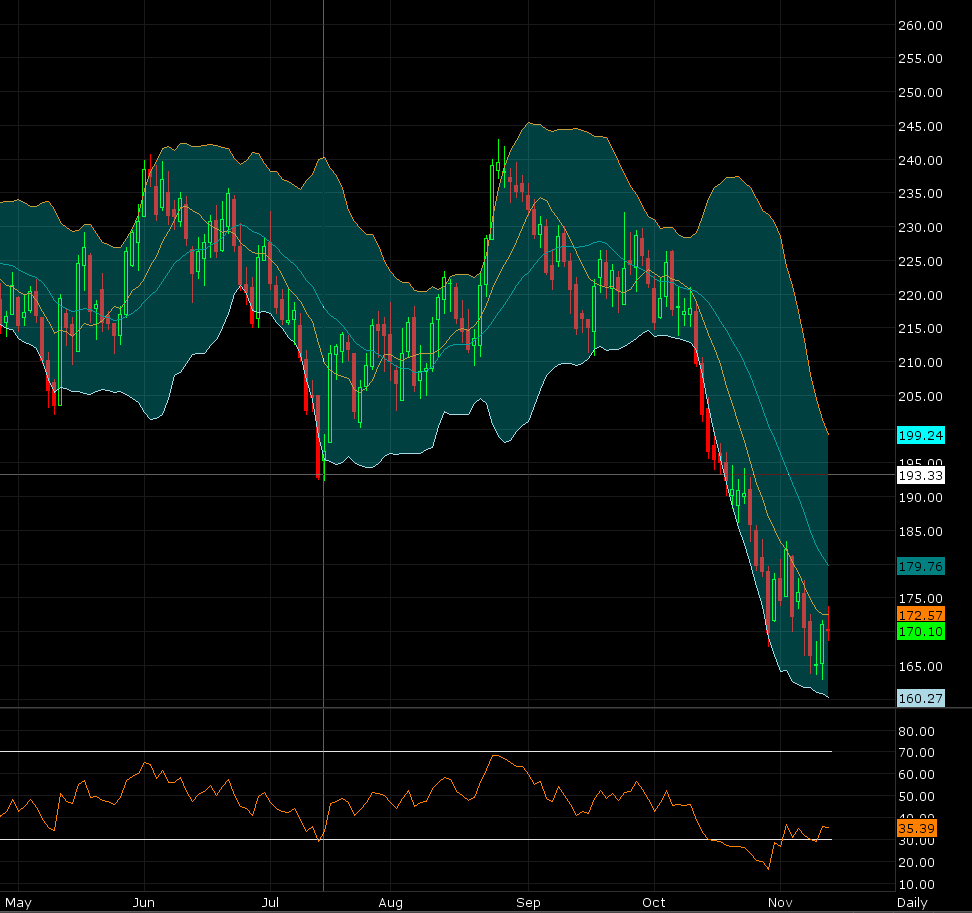 The market opened Monday the 31st of October at 171.70 c/lb and it was only two weeks prior that we were up above the 2 Dollar mark! Abundant rainfall in Brazil and positive crop data coming out from that origin about the 23/24 crop had given a bearish nudge from the fundamental side and this, coupled with a dreary macro-outlook led many to believe the bears were here to stay. However, on Wednesday 2nd the market did nudge back up above 180 c/lb and closed at 182.15 c/lb, buoyed on by a slightly weaker Dollar. It could not hold this level though and the following day we saw a large drop with the market closing the day after at 175.75 c/lb.

On Monday 7th the market opened at 175.70 c/b and although it did tick down to 166.45 c/lb, it could not close below 170 c/lb. We have seen many psychological barriers broken of late and 170 c/lb is just the latest one we have seen smashed. On Tuesday 8th the market closed at 166.45 c/lb and it was not long before people were threatening that we would soon smash through the 160 c/lb floor. Thursday was an active day with a 8.8 c/lb daily range and closed 5.7 c/lb higher than the open. This was mainly down to a small recovery in the USA inflation rate which weakened the Dollar giving strength to origin currencies and therefore helping commodity prices rally. Friday’s close was 170.10 c/lb and interestingly the Dec22/Mar23/May23 spread has decreased to less than 1 c/lb which is in stark contrast to 6 weeks ago when Dec22/Mar23 was standing at 8 c/lb!

The CFTC’s COT report with the cut-off Tuesday 1st November saw a big move in the non-commercial position where the long side decreased to 17,234 lots, a 10 year low! The short side increased and the Net Short position finished at 14,590 lots Net Short.

Certified US Arabica stocks started our reporting period at 384,795 bags and have been slowly building over the course of the fortnight, currently sitting at 448,704 bags. 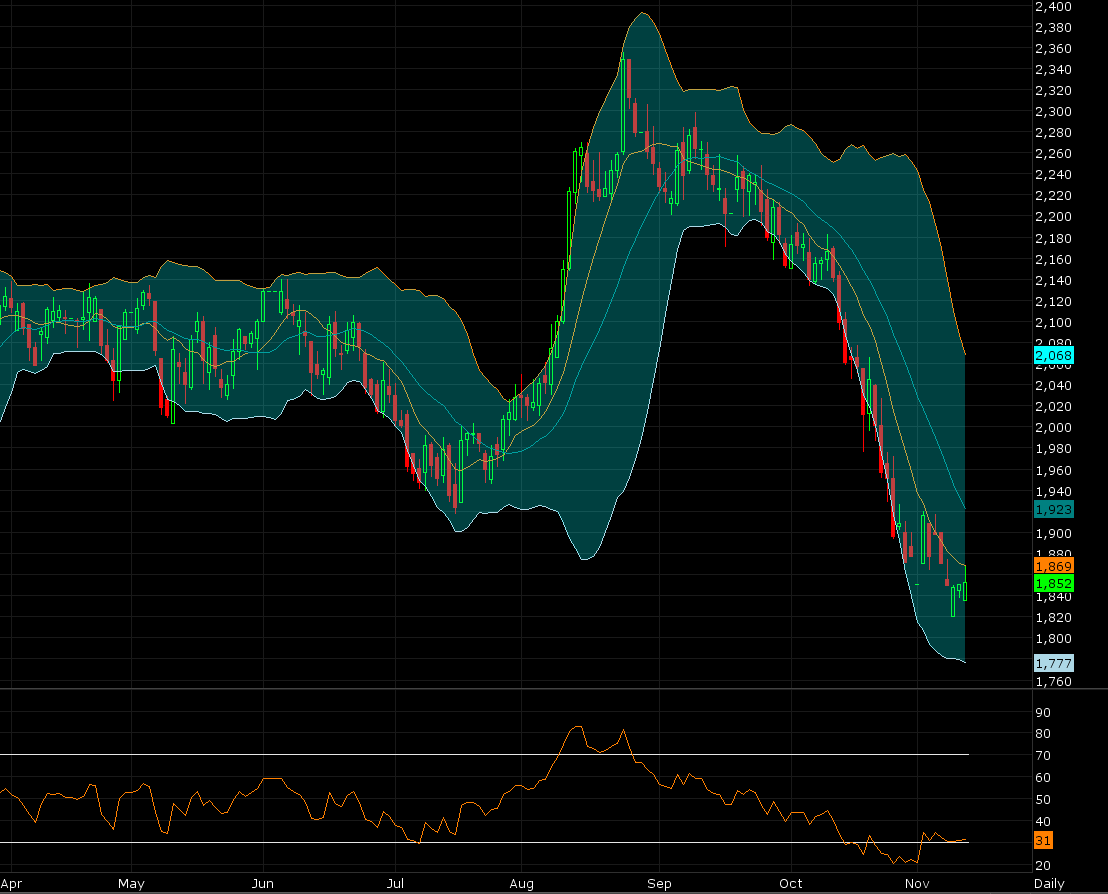 Robusta opened the last day of October at 1,877 $/mt and like Arabica, suffered a large monthly decline; it opened October at 2,150 $/mt and lost 14.5% by the end of the month. There was a pull back in November but the market closed Friday 11th of November at 1,852 $/mt. However, although everyone was talking about this dip in pricing, the big news came out of Colombia! Colombia’s new president Gustavo Petro aims to promote Robusta plantations in the Eastern plains of Orinoquia region, aiming to replace the 1.8 million bags of imported coffee for local consumption, Gonzalo Hernandez, deputy minister of finance said. If the plan is carried out this could be a sizeable injection of volume into global supply and will mean one of the largest origins in the world is adding Robusta into its portfolio. This could well increase R&D into Robusta if some FNC budget is allocated to this species.

In Brazil there is growing investor concern that Brazilian President-elect Luiz Inacio Lula da Silva will not govern with fiscal discipline as the country’s central bank chief likened a market selloff to a “Liz Truss moment for Brazil.” Lula made it clear that fiscal spending will be a priority for his government, but fears remain around where the source of this spending will come from. The market had convinced itself that Lula would be fiscally orthodox but Lula’s honeymoon with investors was over before it began. The Brazilian Real is still finding its feet and remains jittery and sensitive to any comments Lula has about the way he wants to govern.

Data from the National Coffee Institute of Honduras (IHCafe) showed that the country exported 4.7 million bags in the 2021/2022 crop year and estimates that exports for this crop year will increase to 5.2 million bags. This harvest will be the first where the new rules around the origin differential are in place and this has slowed down pre-harvest sales as exporters look to find a balance between a price that the market will pay and a price that complies with the new regulations. Will the new rules price Fairtrade Organic (FTO) coffee out of the market? If conventional pricing remains firm then there will be no way for FTO pricing to ease (in line with the new rules around the origin differential). Many cooperatives that traditionally only sell certified coffee are now looking for opportunities to sell conventional coffee as a risk management strategy.

Due to the volatile and high New York price of the past year, producers in Peru have kept coffee in their warehouses for longer hoping to time another market spike. Cooperatives have tried to lure them to their collection points with higher prices and many were paying based on a New York of 230-240 c/lb even when it was actually at 215-220 c/lb. Competition has been fierce as many of the large multinationals were short and less volume came in than anticipated which exacerbated the issue. When the market dipped below 180 c/lb many producers panicked that we could see the bearish trend continue and handed in their coffee as a response. This has meant there has been a welcome increase in cooperative’s inventories that is helping cover any remaining contracts they need to honour this crop. November/December are always busy shipping months in Peru as competition with fresh fruits heats up and coffee bookings often get rolled for the more expensive refrigerated containers. Let’s hope we receive both blueberries and coffee in time for Christmas!

We saw more hawkish moves from Central Bankers during the past fortnight with both the Federal Reserve and the Bank of England raising rates by 75 basis points. Jerome Powell, Chair of the Fed, said, ‘‘It is very premature to think about a pause in our interest rate hiking cycle’’ and he reiterated that the Fed will ‘‘stay the course’’ and ‘‘keep at it’’ until the job is done. Fun fact, ‘‘Keeping At It’’ is the name of one of Volcker’s books, the man that Powell wants to emulate in his bid to slay inflation in the US. He made it very clear in his speech that he would rather over-tighten than under-tighten to make sure inflation does not rear its ugly head again. Although the market does not think we will see 4 more consecutive 75 bps rises in 2023, it is expected that we will see another 4 rises, just at a slightly slower pace than what we saw in 2022. Will global demand suffer as a consequence? There has been a selloff in commodities and many of the speculators have switched from a Net Long Position to a Net Short Position. We saw this a month ago in Arabica where the Non-Commercial position switched from a Net Long to a Net Short position for the first time since 10 November 2020.

It wasn’t just commodities that saw a sell off though, cryptocurrencies took a beating last week after it emerged Binance would not buy the rival exchange FTX Trading. The price of bitcoin plunged more than 13% to $15,840, its lowest level since November 2020; Ethereum also dropped by 13%.

Well, my friends, the time has come to raise the roof and have some fun! In a reversal of recent fortunes the Dollar also slumped, with both the Pound and Euro benefitting, finishing up our reporting period at 1.18 and 1.03 respectively.