Good day. Welcome to the fortnightly DRWakefield Market Report for the period covering Monday 29th of November to Friday 10th of December. 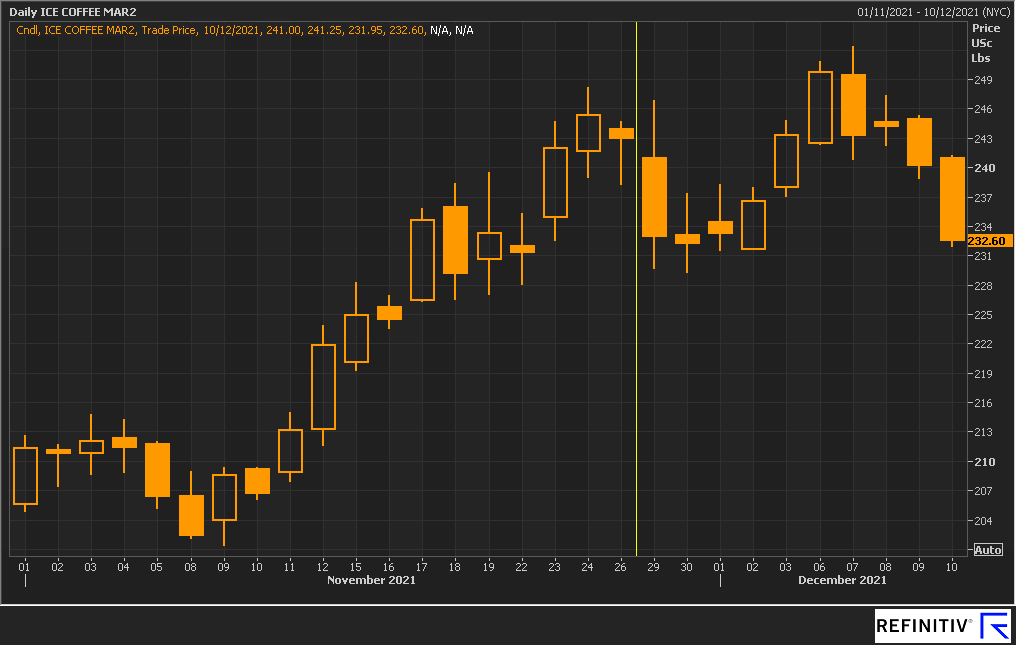 Arabica futures opened Monday 29th November at 241.05 c/lb and the daily trading range was a mammoth 17.25 c/lb! The day closed out at 233 c/lb, representing a loss of 8.05 c/lb. The remainder of the week was rather tepid in comparison to the week’s fiery open. However, on Thursday and Friday futures did rally and regained all the value they had lost on the Monday. Friday 3rd opened at 238 c/lb and closed at 243.35 c/lb.

This bullish sentiment carried through the weekend and on Monday 6th Arabica futures gained 7.35 c/lb to close out at 249.85 c/lb. The big question on everyone’s minds was could we close above 250 c/lb? On Monday 6th we did hit a high of 250.85 c/lb but the market could not consolidate there. Tuesday highs went even farther, and we saw a level of 252.35 c/lb hit, but again this was not to last and the close of the day was 243.30 c/lb. This started off a downtrend that continued through to Friday with a weekly close of 232.60 c/lb, 8.45 c/lb less than how we started the fortnight.

Coffee is trading at a 10-year high. Is 250 c/lb the resistance level or could we see the market soar to 300 c/lb? Some bearish data came in from Brazil which could dampen the bullish party as the coffee belt in Brazil received very good rainfall and Rabobank increases its output estimate for the Brazilian 2022/23 coffee crop.

In the CFTC’s COT report with the cut-off Tuesday 7th December both the non-commercial net long and the Index Traders net long dropped, 912 lots and 1,344 lots respectively.

Certified US Arabica stocks dipped to 1.60 million bags in November and currently sit at 1.61. The largest monthly drawdowns were September and October, and this seems to have levelled out in the run-up to the Christmas period. 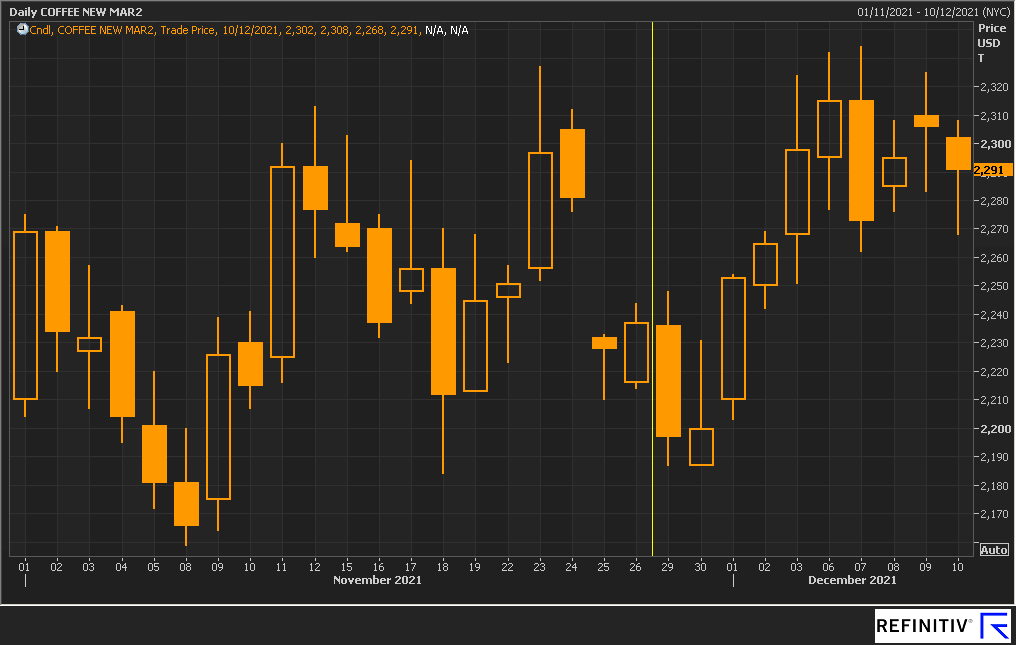 Robusta opened the fortnight at 2,236 $/mt and, like its sweeter counterpart Arabica, lost a good bit of value on the Monday, sliding to a close of 2,197 $/mt. Tuesday opened at 2,187 $/mt and this represented the fortnightly low. After this low, it was only up, and it wasn’t till Tuesday 7th when Robusta futures closed lower than they opened. Friday 10th closed at 2,291 $/mt, 55 $/mt higher than how the fortnight began.

In Brazil, Cooxupé, the largest coffee cooperative and exporter, announced it will ship 4.8 million bags in 2021. You may be thinking, “4.8 million bags seems a lot, more than the sum of many small/medium-sized coffee origins”. While this is true, it was 20% down on its estimate for the year, due to logistics challenges driven by a lack of containers and high freight rates. Supply chain issues in Brazil and across the globe have plagued the second half of 2021 and look set to continue well into Q3 of 2022.

In Canada, all eastbound transportation routes from Vancouver were cut off due to catastrophic flooding in the nearby Fraser Valley and a series of significant mudslides across the mountainous stretches of highways throughout the province. Since rail was not moving out of Vancouver, ocean freight then backed up even more than it already was as containers could not get loaded to rail. This has caused significant delays to shipments heading eastbound to Europe and Asia and meant many containers destined for the UK are still waiting to leave Canada.

In Kenya, last week’s auction saw 27,569 bags sold, over 10,000 bags more than the week prior. It was a mammoth day with 12 hours of trading! As physical coffee rushes in from Central Kenya and Mt Kenya, this week’s auction is set to be a large one too. It will be the last of 2021 with the auction not reopening until January. Top lots continue to trade at high premiums and differentials remain firm. 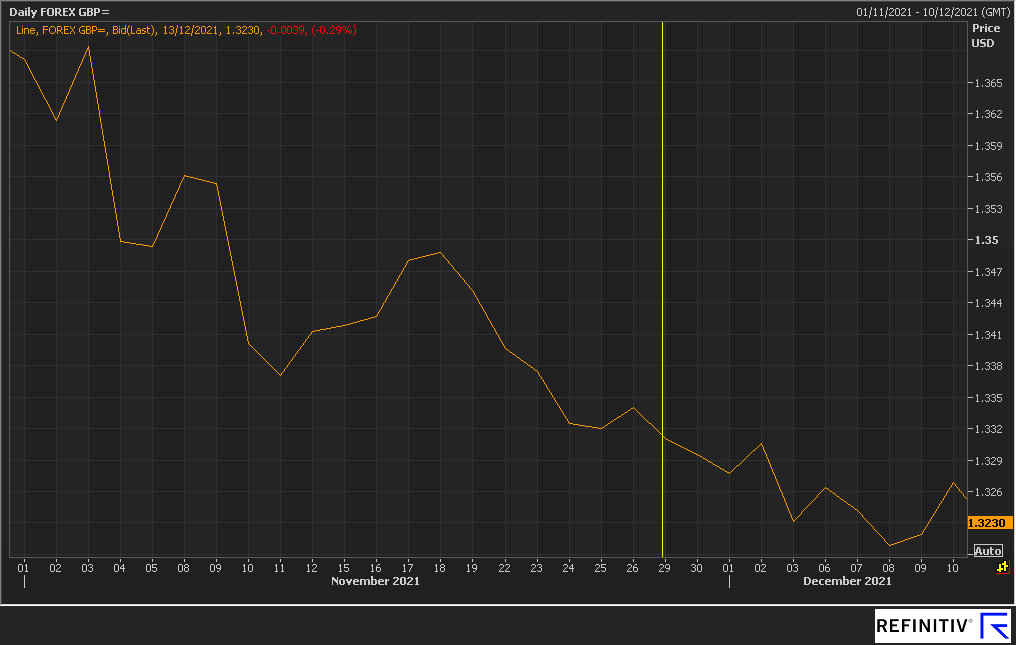 The Cable started the fortnight trading at 1.331 and, save a couple of pullbacks that lasted 1 day at a time, the downtrend continued. The Pound was hit by Omicron concerns on Monday 29th and this pressure weighed down on the currency; pressure that it couldn’t stave off (for long at least). Rising UK Omicron cases and the uncertainty about how current vaccines can deal with this new strain saw the market dominated by US Dollar gains and this was how the week finished.

Sterling weakness continued into the following week after the announcement of ‘Plan B’ restrictions in England. It did however regain some value towards the end of the week and nudged above 1.325 on Friday 10th. 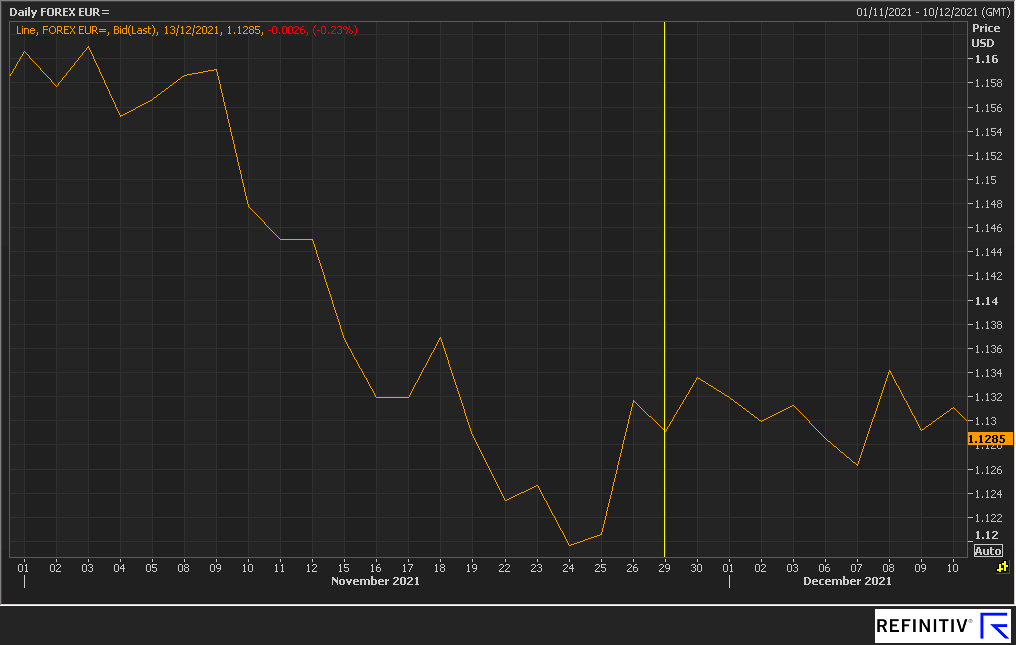 EUR/USD opened Monday 29th November trading at 1.128 and was in a climate never seen before: Euro-area inflation had just reached a record for the era of the single currency to a level that exceeded all forecasts. Consumer prices rose to an annual 4.9% in November, beating all 40 predictions in a Bloomberg survey of economists.

What will also be noteworthy is the European Central Bank’s reaction. Of late the ECB has diverged from the policies of the Bank of England and the US Federal Reserve, where now the hawks dominate the doves. To what degree the ECB does diverge from its central banking counterparts is sure to have a very large effect on this key currency pair going forward. The pair hit a low of 1.127 on Tuesday 7th and closed out the fortnight at 1.13.

In other news, The Fed has retired the word ‘transitory’ as Jerome Powell thinks it caused more confusion than clarity when it was used. Let’s hope they better explain the next word they plump for.

We hope you enjoyed this report and see you in two weeks for the final report of 2021! Till next time coffee folks!