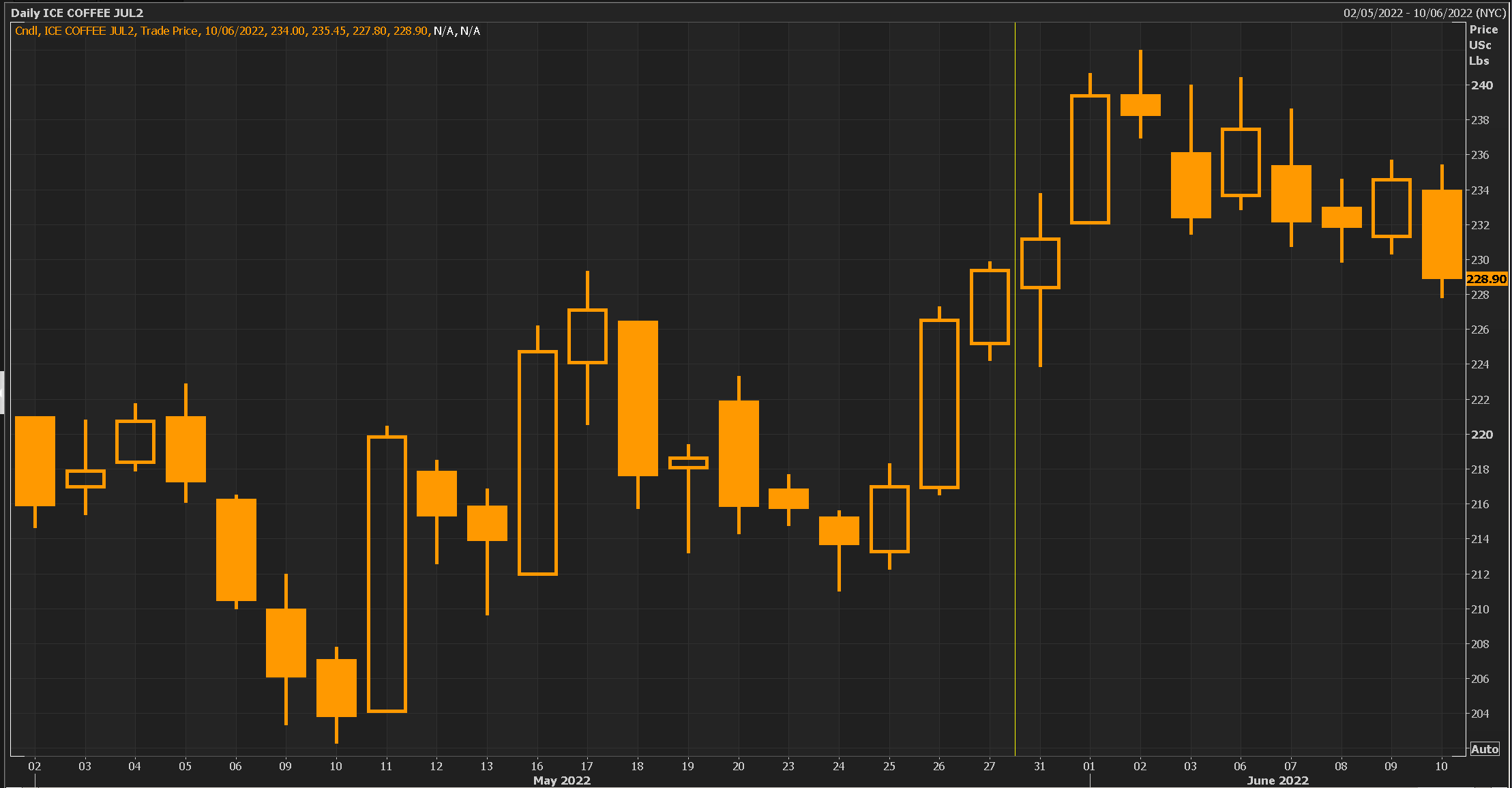 The market in the previous fortnight had been making a concerted effort to remain in the low 30s but broke out of that on the opening day of the period, the 31st May. Beginning at 228.30 c/Ib, it managed to make gains later in the day as Crude oil crept over 115 $/barrel and saw further upwards movement on the 1st June marking five sessions in a row of new highs. The period high and overbought territory of 242.00 c/Ib was reached on the 2nd June but came off to close lower at 236.96 c/Ib. A steady decline in the value of Arabica persisted until the 10th of June despite mention of potential cold weather in Brazil. Short-term technical factors showing the market was overbought and a weakening Brazilian Real emphasised the bearish side. By the end of the week, it had dipped back into the 20s and closed out the 10th June on 228.90 c/Ib.

The CFTC’s COT report with the cut-off Tuesday 31st May showed that the speculators changed tact and switched from the previous week to up their net long position to 23,453 lots. The commercials counteracted this by driving their net short position down to -60,557 lots.

The CFTC’s COT report with the cut-off Tuesday 7th June showed the specs and comms move further in their respective directions 25,618 lots and -74,935 lots.

Certified US Arabica stocks stand at their second-lowest point of the year so far with 1.02 million bags waiting in the warehouse. Robusta stocks held fast at 1.69 million bags. 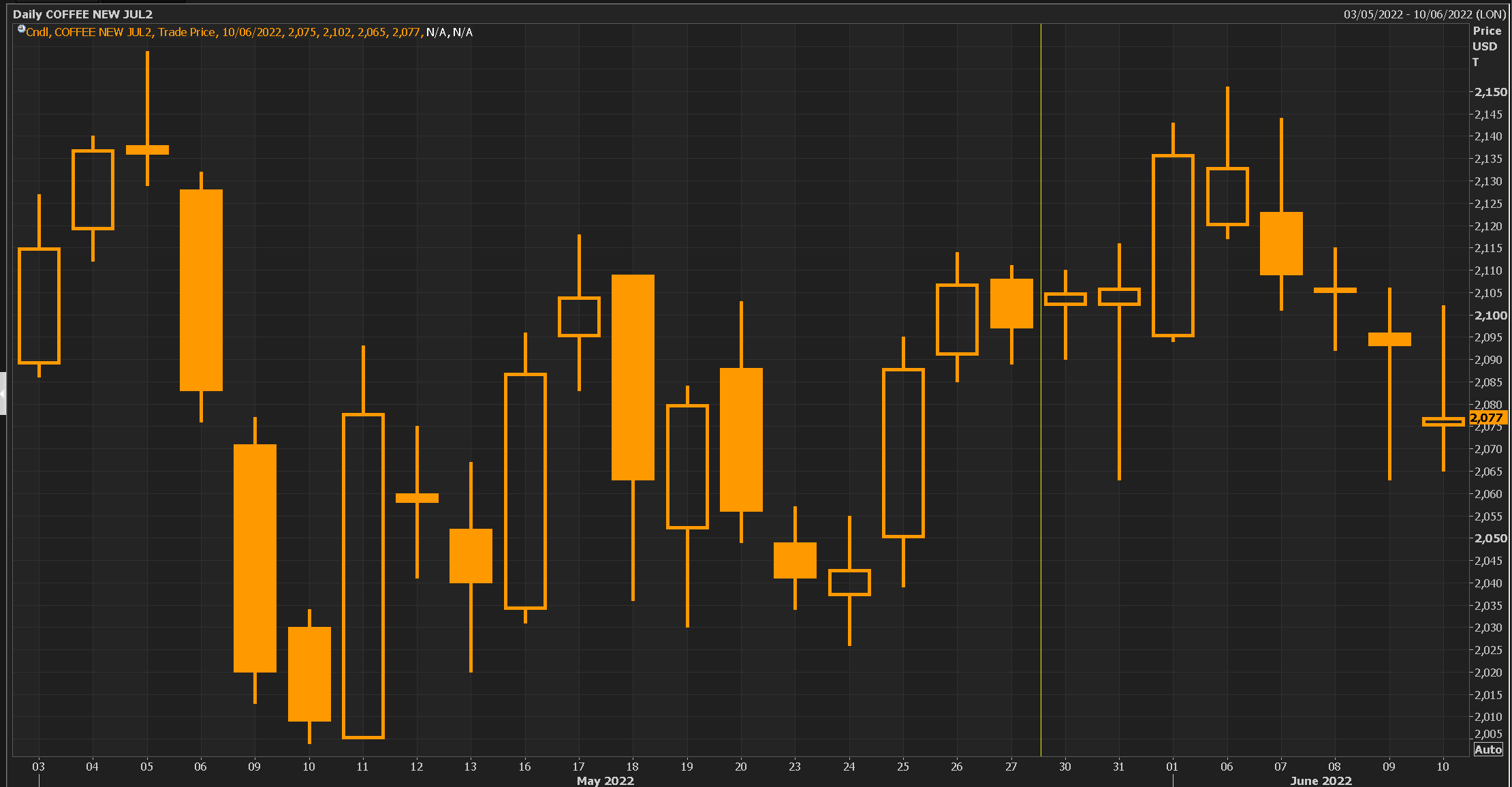 The Robusta market opened on the 30th May at 2,1,02 $/mt, trading inside of the final two days of the previous week but ultimately closed slightly higher. The 31st witnessed Robusta mirror the Arabica market and saw a lot of bearish pressure which touched the period low of 2,063 $/mt but was overcome by speculative buying and closed skyward on the 30th. Continuing through the long Jubilee weekend the next few days saw prices rally to 2,151 $/mt. In the latter half of the period, the spec buying had lost momentum and without another source to provide fuel to the bullish fire, prices came off, falling back into the price range seen throughout May. The period settled on 2,077 $/mt, 21 $/mt down from the period open.

The cold spell in May appears not to have caused any damage and the rain that it brought has passed for the time being with no more forecasted in the coffee regions. It’s set to return to typical autumn weather with mild temperature and sun. The USDA revised their Brazil figures for the 21/22 crop from 56.3 million bags to 58.1 million bags with expectations of over 64 million bags for the 22/23 crop. The harvest is currently running at the same pace as last year with 17% harvested at this point. Currently, it’s said that the biggest bottleneck for export is not the number of shipping containers but port infrastructure to allow loading and unloading.

In Peru, the harvest in the middle elevation zones is running at full pace. Despite the high market and high prices being paid to farmers the increased cost of production is reducing the amount of coffee being brought to buying stations and cooperatives. As mentioned before, the largest price hike for growers has come from synthetic fertilisers. Farmers have either chosen to reduce the amount they apply or look for other organic options. Rainfall has also caused damage to mountain infrastructure and made drying coffee more challenging. It is likely that the ability to secure forward contracts will come to an end sooner than in previous years.

La Niña is continuing the recent annual pattern of smaller Arabica harvests in Indonesia as more heavy rains during and after flowering reduce the number of flowers that make it to fruit. This has also been hampering the processing and drying. On the side of Robusta, however, the 22/23 crop is expected to increase to the highest output since 15/16. Exports from Indonesia increased in April 2022 by nearly 14% which is largely due to the success of the soluble coffee industry. Indonesia is the second-largest exporter of soluble coffee after Brazil. 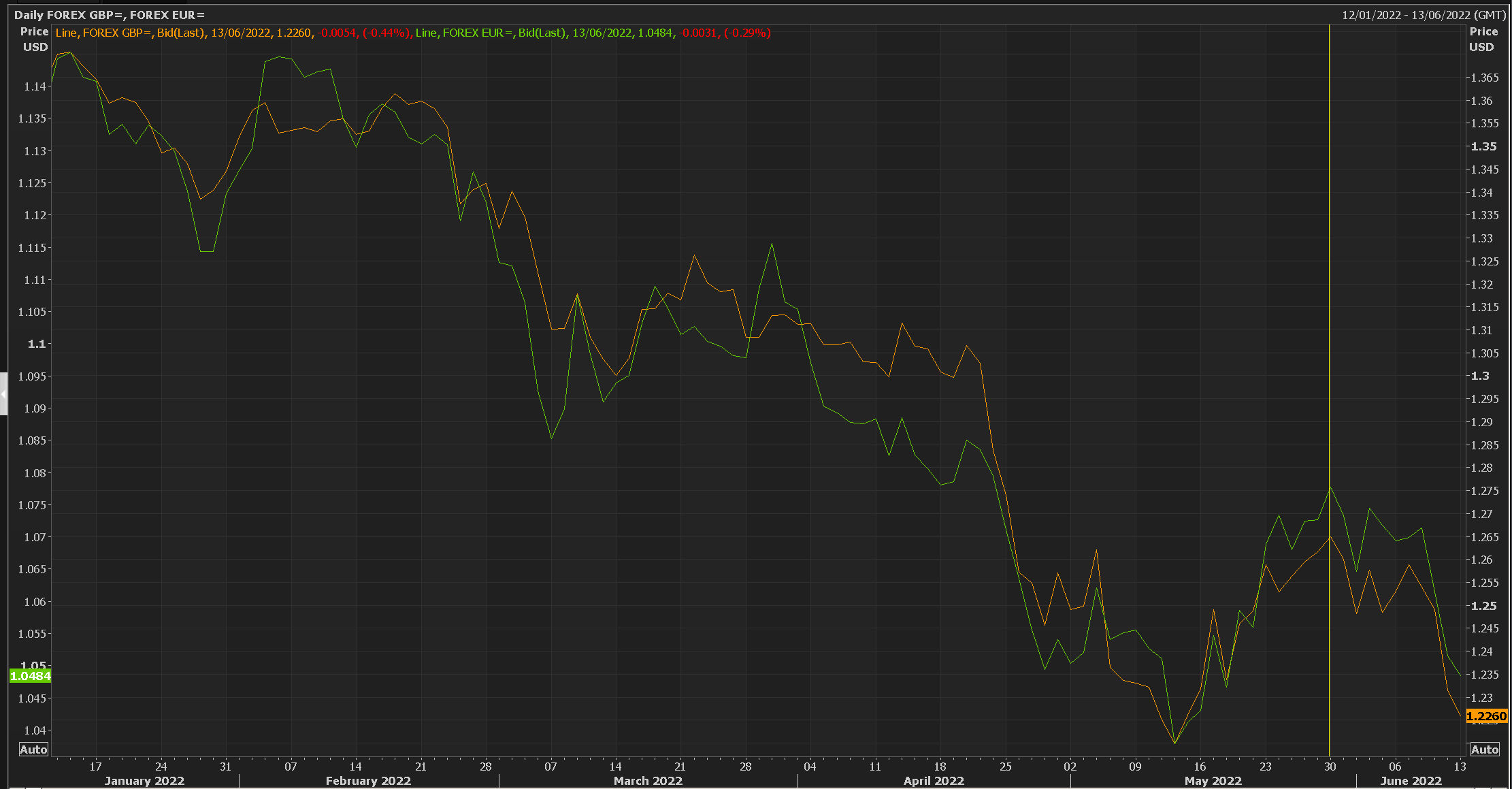 Like the big five of the Africa Savanah there are five main factors that affect currencies. These are: inflation, monetary policy, sentiment, GDP and balance of payments. Most often mentioned in reports is inflation which often leads to the monetary policies set out by the central banks. This helps to feed the overall market sentiment of that currency, country, economic zone, as in the case of the Euro, or even key people.

The latter half of May had seen an increased value for both the Pound and Euro. Hitting highs of 1.265 and 1.085 respectively. On the final day of May, inflation figures for the Eurozone came in higher than forecast, at 8.1% caused by rising energy prices. Usually, rising inflation indicates interest rates will be hiked by the ECB shortly after, and this drives positive sentiment and belief in the value of the currency and so an uptick in the value of the Euro against the Dollar. This can be witnessed on the 1st June. Unfortunately, non-committal statements by Christine Lagarde about this rate hike spooked the market and brought the value back down all the way to end the period at 1.046. Sterling lost out over the week as the PM faced a vote of no confidence and data released on the UK economy showed a shrinkage of 0.3% which brought it down to 1.226, nearly at its lowest value for over a year.

In the macro world, a lot of focus is on the EU’s agreement to ban 90% of Russian oil imports, which sparked a price increase causing US gasoline prices to reach their highest ever value and will impact further the cost of all other capital goods. Combined with the high costs, is the amount of revolving debt consumers currently have. Revolving debt refers to the ability to pay back current debt in portions, and at the same time take on further debt, e.g., a credit card. This puts the FED and other institutions in a difficult position, as the desire to curb inflation by raising interest rates may cause large numbers of consumers to default on their loans. I’m sure I don’t need to explain what occurs when this happens on a large enough scale. To end on a more positive note China is easing its lockdowns in Shanghai which should see the return of millions of workers to factories and industry.