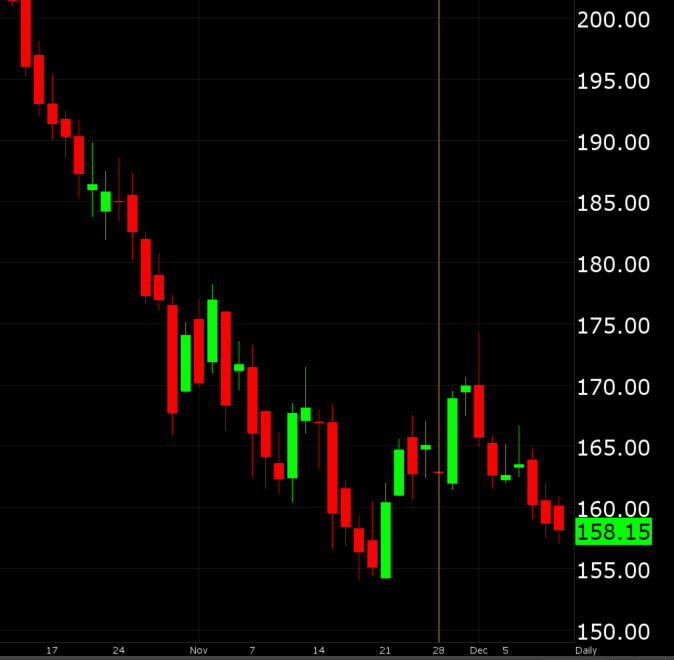 The market opened on Monday 28 November at 162.90 c/lb and traded fairly slowly throughout the first day of the period. It hit a high of 164.25 c/lb, a low of 160.05 c/lb and closed at 162.85 c/lb. The following day saw a big increase in activity. The market opened at 161.95 c/lb and traded almost exclusively upwards, hitting 169.50 c/lb before closing at 168.90 c/lb, 6.95 c/lb above open. This upward recovery was sparked by specs buying coffee futures, their confidence in the market growing on account of the possibility of easing Covid restrictions in China and the release of Citigroup’s report on the rebalancing of index funds, which estimates coffee and cotton could receive up to $1 billion in the rebalancing in the new year. The upward movement continued until Thursday 1st December. In the initial hours after the market opened, the market hit the high of the period, 174.35 c/lb, almost scraping the 175 c/lb resistance level, before being pushed back down almost 10 c/lb to close at 164.95 c/lb. This was largely driven by the specs selling off their position. The following day saw the trend continue downwards, with the market closing at 161.70 c/lb.

During the second week of the reporting period, the market tried to regain lost ground, with a small uptick in prices on the Monday and Tuesday, but generally, trading was quiet, and by Wednesday the market was heading back down, driven again by spec selling, and reinforced by news of good rainfall in Brazil which will bolster the 23/24 crop. The period ended with another slow trading day on Friday 9 December across commodity and equity markets, and the NY C closed out the fortnight at 158.15 c/lb.

The CFTC’s COT report with the cut-off Tuesday 6th December witnessed the non-commercials return to extending their gross short position, they added fewer lots to their gross long position, making their net short increase by 2,341 lots to 24,900 lots overall. The Index Net Long decreased by 793 lots to 35,810 lots ahead of the January balancing window where between 15,000 to 23,000 lots are expected to be bought.

Certified US Arabica stocks have now reached 668,581 bags and look set to keep increasing after reaching historic lows over September and October this year. 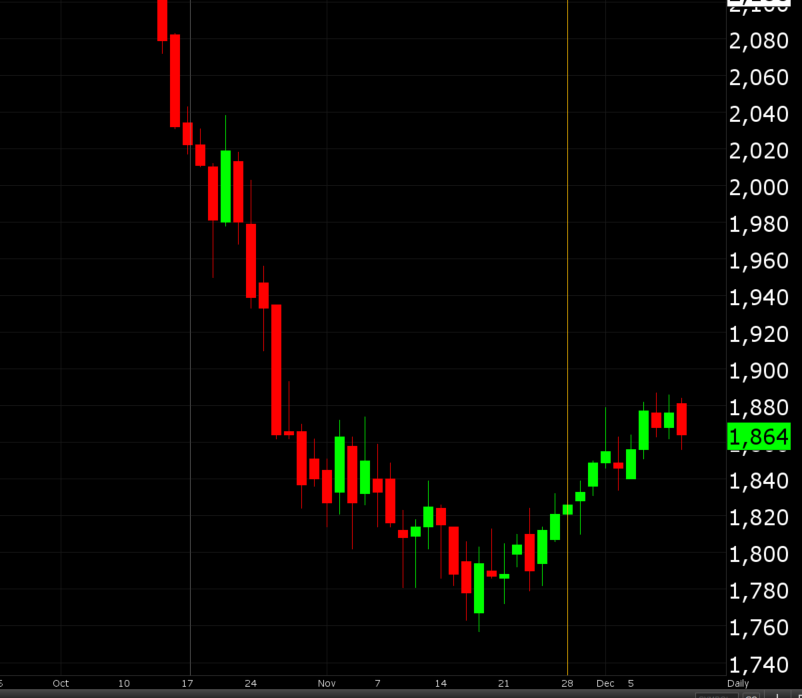 After months of following in the New York’s footsteps, the past fortnight has seen the London Robusta market break away from our friends across the pond, deciding it was time to go its own way. On Monday 28th November the market opened at 1,821 $/mt, hit 1,810 $/mt, the low of the period, before recovering and closing at 1,826 $/mt. This trend continued, pushing higher and higher. Thursday 1st December saw the high of the week at 1,879 $/mt, before a small downturn on the Friday. This was short lived and the start of the following week Robusta was back on its upwards track. 7th December saw the period high of 1,887 $/mt, before the gains began to level off over the 8th and 9th of December, closing out the fortnight at 1,864 $/mt, 43 $/mt higher than opening. This bullish trend has been driven by both industry and specs buying up and reinforced by concerns over the quality of the Vietnamese crop, this is now 60% complete meaning reports over its quality are well backed.

In Colombia total output from November was down 6% from November 2021. This year production volume reached 1.06 million bags, versus 1.31 million last year, a significant decrease. Similarly, exports have also decreased by 25%, from 1.14 million bags last November, to just 854,000 this year. The FNC have attributed the drop in production to bad weather, and the drop in exports to road blocks preventing coffee from being able to be moved internally. Hopefully this will pick back up to previous levels, or we may well see Colombian prices start to rise once again.

Good rainfall in Brazil has increased confidence in the expected size of the 23/24 crop, further rains are forecast, propelling the bearish trend in the NYC we’ve seen recently. However, diffs have held firm and the past fortnight has been quiet in Brazil on the trading front. Producers are playing coy and holding off selling, with lower prices and the prospect of having to pay added income tax if they sell more coffee before 2023. On top of this, the World Cup has continued to prove a distraction globally, likely adding to the slow trading we’ve seen. Although, following Brazil’s dramatic defeat by Croatia, knocking them out of the tournament, perhaps we may now see activity pick up from Brazil!

Out of Kenya the coffee auction prices are remaining steady compared to previous weeks. Many lots on offer are being reoffered, as prices remain high and farmers are unwilling to drop them down. This isn’t expected to change and many lots are expected to remain unsold in the coming weeks. This year’s fly crop has nearly sold, and early lots of the main crop are beginning to trickle in. Quality is decent and expected to improve as the main crop comes through in full force. Rains have been short and favourable for the past month, which is looking positive for the main crop rolling in. The final auction of 2022 will be held on 14th December, the 2023 auctions will begin on 10th January. 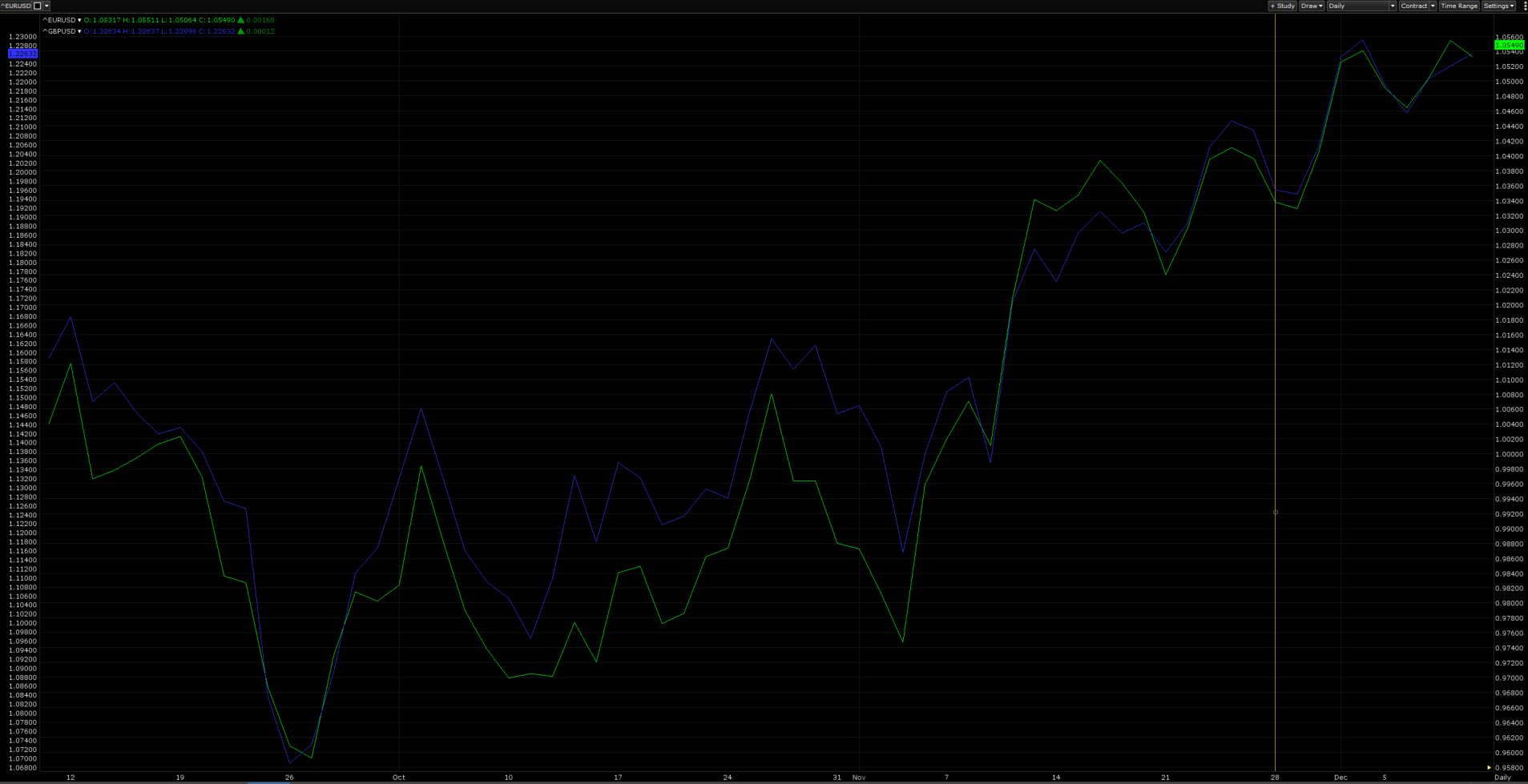 This chart shows GBPUSD in blue and EURUSD in green.

It’s been another sterling few weeks for GBP. On 28 November GBPUSD stood at 1.19, glancing 1.23 on 1st December, and closing out the fortnight at 1.22. We haven’t seen rates like these since early August, when Boris Johnson was still our prime minister and we still had a chance to bring football home! EUR is also tracking well against USD, starting the period at 1.03 and closing just shy of 1.06. If we keep seeing increases like this, could it mean we’ve escaped the parity danger zone? However, as the graph illustrates, GBP and EUR have followed a near identical pattern which can only mean one thing, that their recent gains are more on account of USD weakness rather than GBP or EUR strength. The USD has been on the backfoot for the last two months, after the Dollar Index hit record highs this Autumn it has been on a very choppy downward trend, and remains volatile ahead of the Fed’s decision on interest rates coming later this week.  The Bank of England and European Central Bank are also expected to announce their decisions on interest rates this week, which are likely to impact currency, something to keep an eye on as any significant changes will affect coffee prices in the UK and Europe.

UK GDP has surprised most of us, with newly released data that GBP grew by 0.5% in October 2022, when it was predicted to shrink by 0.1%. Whilst this is no doubt good news, the threat of recession remains on the horizon and despite the growth in October, GDP did fall 0.3% in Q3 q-o-q. The forecast for Q4 is stormy and if overall growth for the quarter does end up negative, which many are predicting will be the case, we will officially be in recession with the UK economy knocking on heaven’s door by the end of the year.