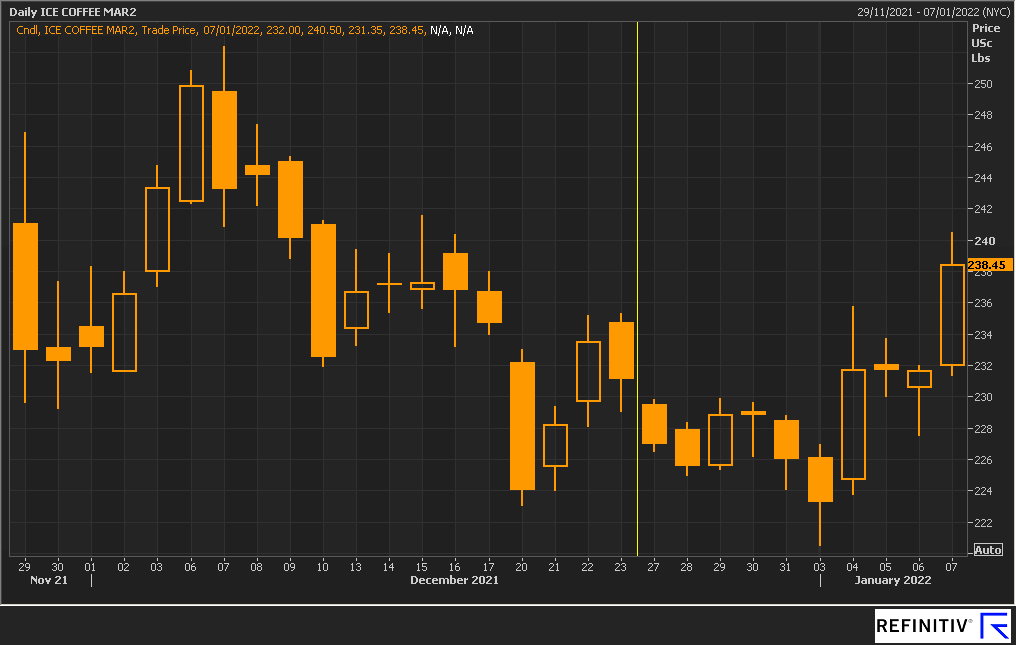 Arabica futures opened Monday 27th of December at 229.55 c/lb, and the week was rather flat compared to the more tempestuous preceding few weeks. With many people taking a break over the festive period, there was not much activity and the last day of 2021 closed at 226.10 c/lb, representing a 78% increase over the course of the year (2021 opened at 128.40 c/lb and closed at 226.10 c/lb). Bloomberg opines that commodities, in general, are unlikely to sustain the 2021 price advance and revert lower due to supply and demand elasticity, with risks tilted towards declining about as fast as they rose. However, the shortage of Arabica in the medium term remains a strong bullish factor for coffee. Moreover, after the 22/23 crop, we head into an off-cycle in Brazil, likely to perpetuate the supply deficit.

People that had some time off clearly felt very rested as the following week was full of the ups and downs to which we have become accustomed. Tuesday 4th saw a daily trading range of 12.05 c/lb and finished the day 7 c/lb higher than it began. It spent the next 2 days taking a breather and then on Friday 7th again rose by a big margin and closed 6.45 c/lb higher. Will the rebalancing of the BCOM this week ensue a big sell-off by the Index Traders Position? This could well wipe out the gains made last week.

In the CFTC’s COT report with the cut-off Tuesday 28th December, the Non-Commercials continued to erode their Net Long position and shaved off 1,551 lots to total 39,421. This was the 5th straight decline in the Net Long Position since the end of November.

In the CFTC’s COT report with the cut-off Tuesday 4th January, this trend continued, and the Net Long dropped to 38,417 lots long. The Index Net Long increased by 678 lots. With the rebalancing of the BCOM in January, we expect there to be some big movement in the next COT report.

Certified US Arabica stocks now stand at 1.51 million bags, 0.11 million bags less than this time last year and below the 10-, 5- and 2-year average, highlighting the shortage of nearby physical in the market. 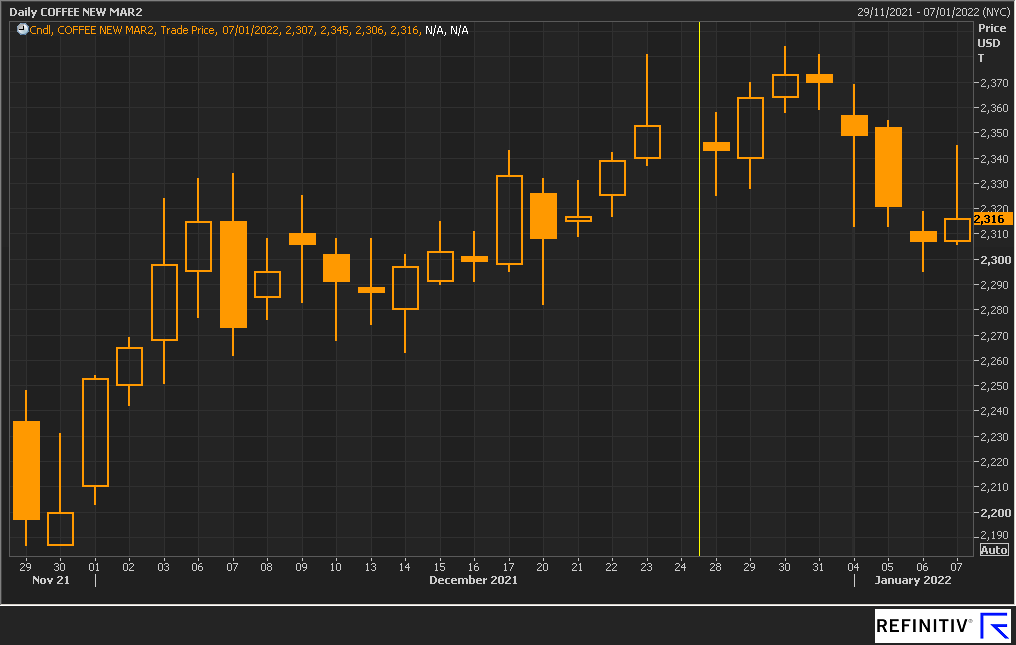 Unlike Arabica, which took a tumble after December 7th, Robusta continued its march upwards for the rest of the month. This was largely driven by shortages due to supply chain issues in Vietnam. It closed Thursday 30th at 2,373 $/mt, representing the highest close of the year, 70% higher than Robusta started 2021.

It could not finish 2021 at this dizzying height, however, and save for Friday 7th, Robusta kept on closing lower than it opened, finishing our reporting period at 2,307 $/mt.

Coffee is getting so expensive that even consumers in Brazil, where it’s abundant, cannot afford it. Sales in Brazil fell 14% in November compared to the previous month’s trading. Retail pricing went up 40%, which triggered an immediate response. How elastic is demand over there, and does it mirror the global elasticity of demand? 2022 should give us the data to conclude that. It’s expected many consumers will opt for Robusta to keep costs down. The outlook for Brazilian Robusta is rosy, as most Robusta producing areas were spared the cold snaps that devastated Brazilian Arabica trees last July.

2022’s first Kenyan coffee auction started off with firm prices, bolstered by a high NYC and good quality on offer. Certified lots continue to garner the best prices at auction, and this trend is expected to continue. The main crop is predicted to end a little earlier than expected, and with demand anticipated to stay the same or increase, it’s likely prices will either hold or go up. 25,000 bags are on offer at the next auction, and weather remains hot and dry. The Kenya Shilling remains very weak against the US Dollar.

Good weather across December provided for steady coffee harvesting in Vietnam. Farmers took the opportunity of the sunshine and have reportedly harvested up to 80% of this year’s crop. As the Robusta market has increased, differentials have marched on further into minus territory and are now heavily discounted against Robusta futures. 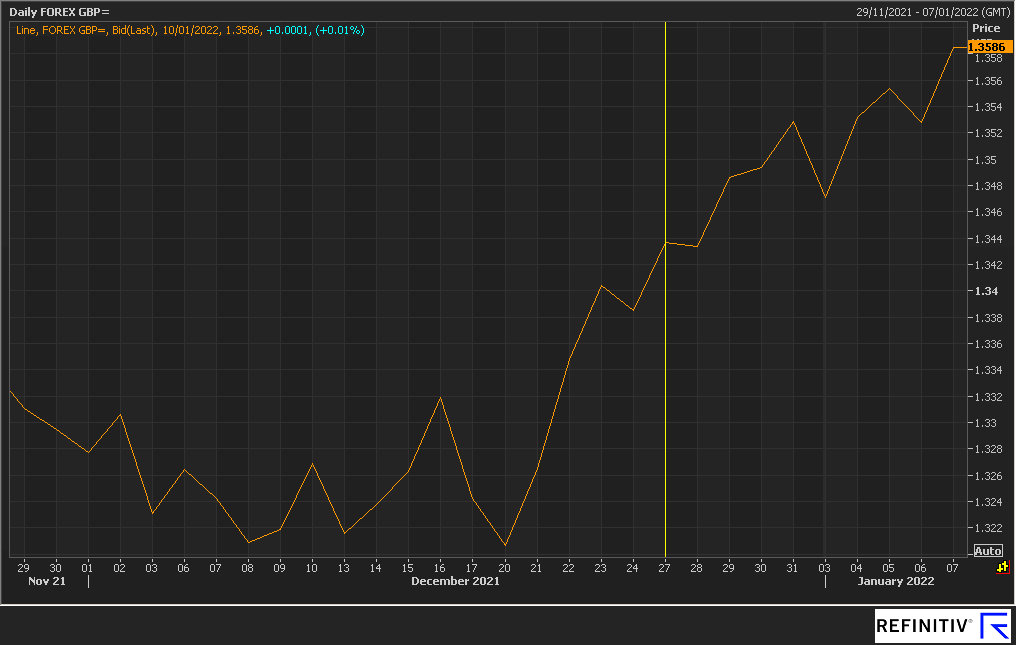 GBP/USD started the fortnight trading at 1.343 and, buoyed on by sentiment that Omicron would be shorter lived than originally anticipated, it traded upwards for the rest of the week, hitting 1.353 on Friday. Sterling gained nearly 7% on the US Dollar over the course of 2021 and was among the best performing major currencies that year. As more interest rate rises are expected, this strength is expected to continue. However, the strength was not there on the final day of the year and there was a small pullback by the Dollar, and GBP/USD slid to 1.347 on Monday 3rd of January.

Boris Johnson confirmed a ‘good chance’ that no fresh measures would need to be introduced to combat Omicron, which provided some upside momentum to the Pound. Sterling was not only stronger against the Dollar but also against the Euro, nearly hitting a 5-year high. 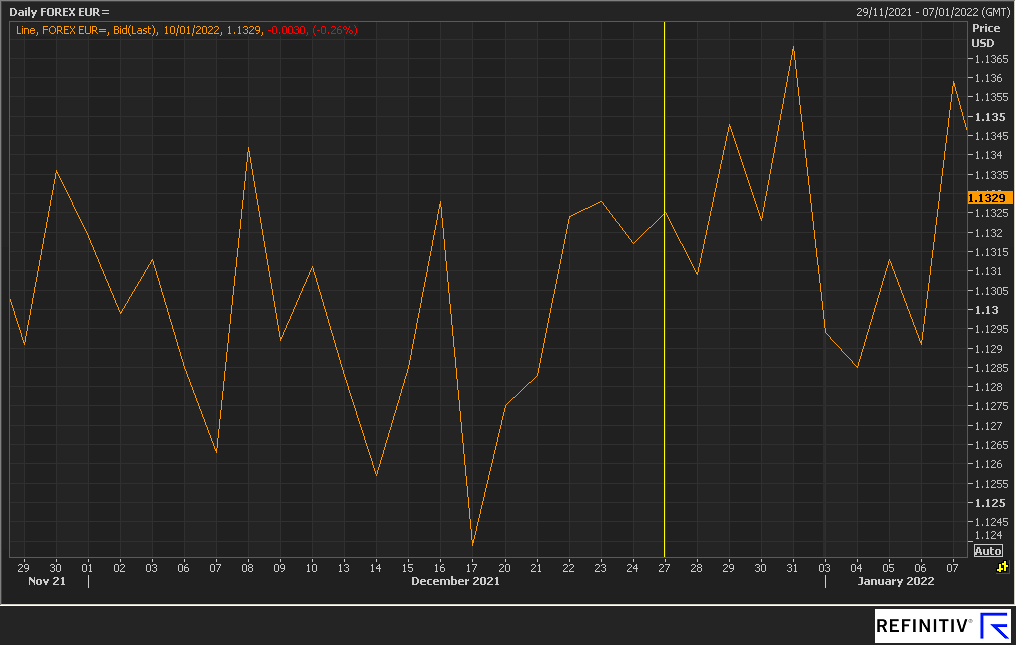 It’s been a turbulent time for EUR/USD of late, with no currency currently winning the tug of war. As you can see from the graph above, we’ve been trading in the 1.128-1.138 range for the last fortnight, and the market is still waiting to see to what extent the ECB’s rate rises (assuming the ECB makes any) will differ from the US FED’s throughout 2022. The Fed now looks certain to increase rates at the March meeting, and some commentators are now looking at 4 rate hikes this year. The European Central Bank (ECB) hasn’t given any indications it will increase rates anytime soon, but the market thinks at least one is likely. We say goodbye to ‘transitory inflation’ in 2022 and now focus on what implications medium-term inflation could mean for the global economy.