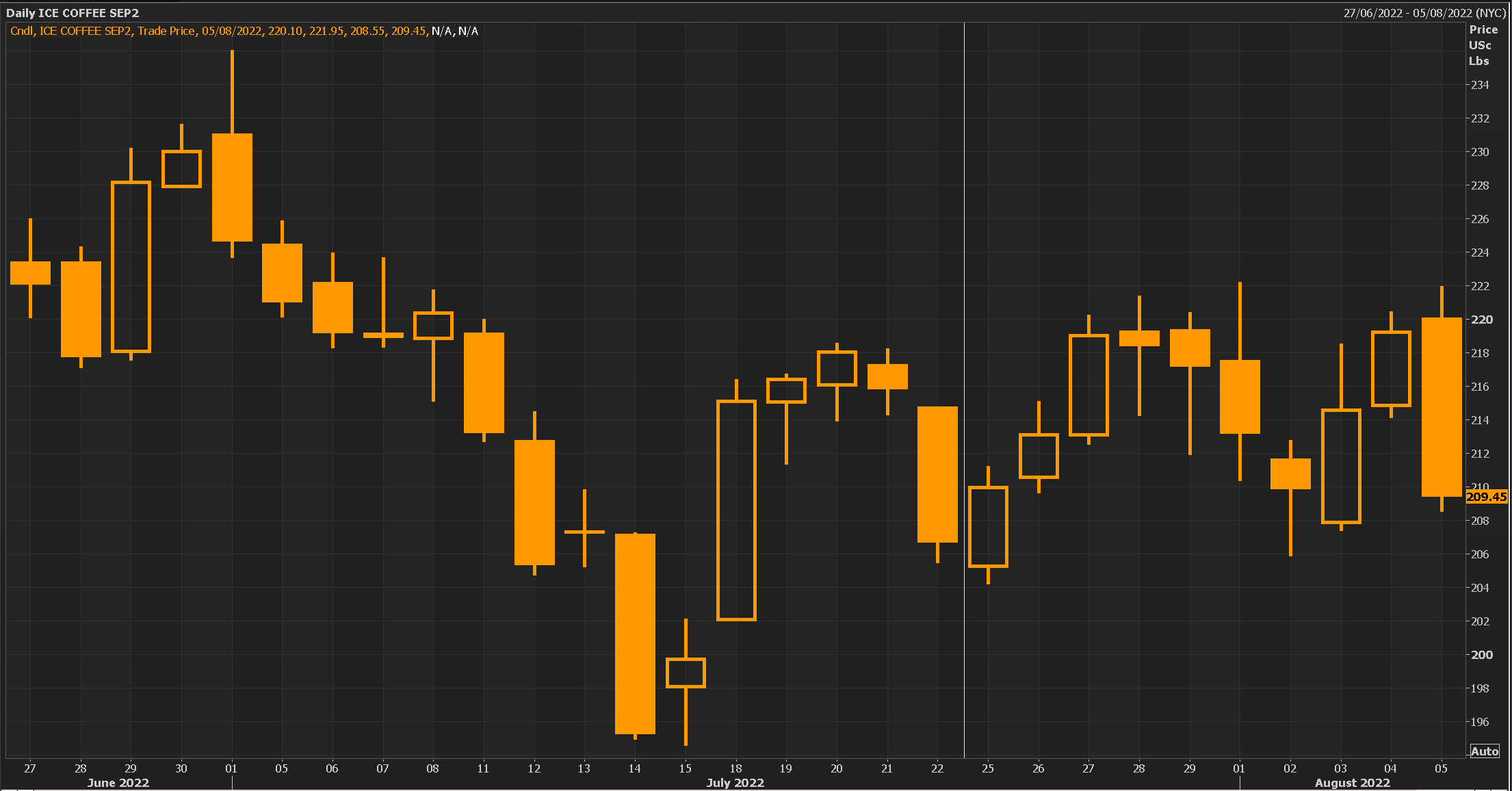 We started the period off on Monday 25th July with an open of 205.20 c/Ib and spent the next three sessions riding the bull up with both specs and commercials buying. The commercials are going long ahead of the September delivery period and the specs were encouraged by the uptick in prices. From the 28th we witnessed a decline in the NYC price as news about the US economy shrank for the second quarter running, producing a bearish tone. On the other side, as the dry weather in Brazil continues, there are some initial thoughts that maybe this will affect the crop 23/24 crop, creating some volatility which the short terms specs were feeding off. The period high was claimed on the 1st August at 222.20 c/Ib. The final session of the period saw another day of large volatility, something we have seen a lot this summer. As certified stocks remain at historic lows, pressure is applied on the bull side. The low reached 208.55 c/Ib and the high 221.95 C/Ib, a spread of 13.4 c/Ib, caused in this instance by a large spec sell off as more weather reports coming out of Brazil further reduced the possibility of damaging frosts.

The CFTC’s COT report with the cut-off Tuesday 2nd Aug saw no large move from the previous week. The specs reduced their net long slightly to 13,539 lots and the commercials increased their net short slightly to 51,737 lots.

Certified US Arabica stocks as expected, pulled down just a bit more to reach 0.66 million bags and Robusta stocks came down to 1.68 million bags. The market’s concern with the dwindling stocks has been one of the main reasons that have supported coffee prices. 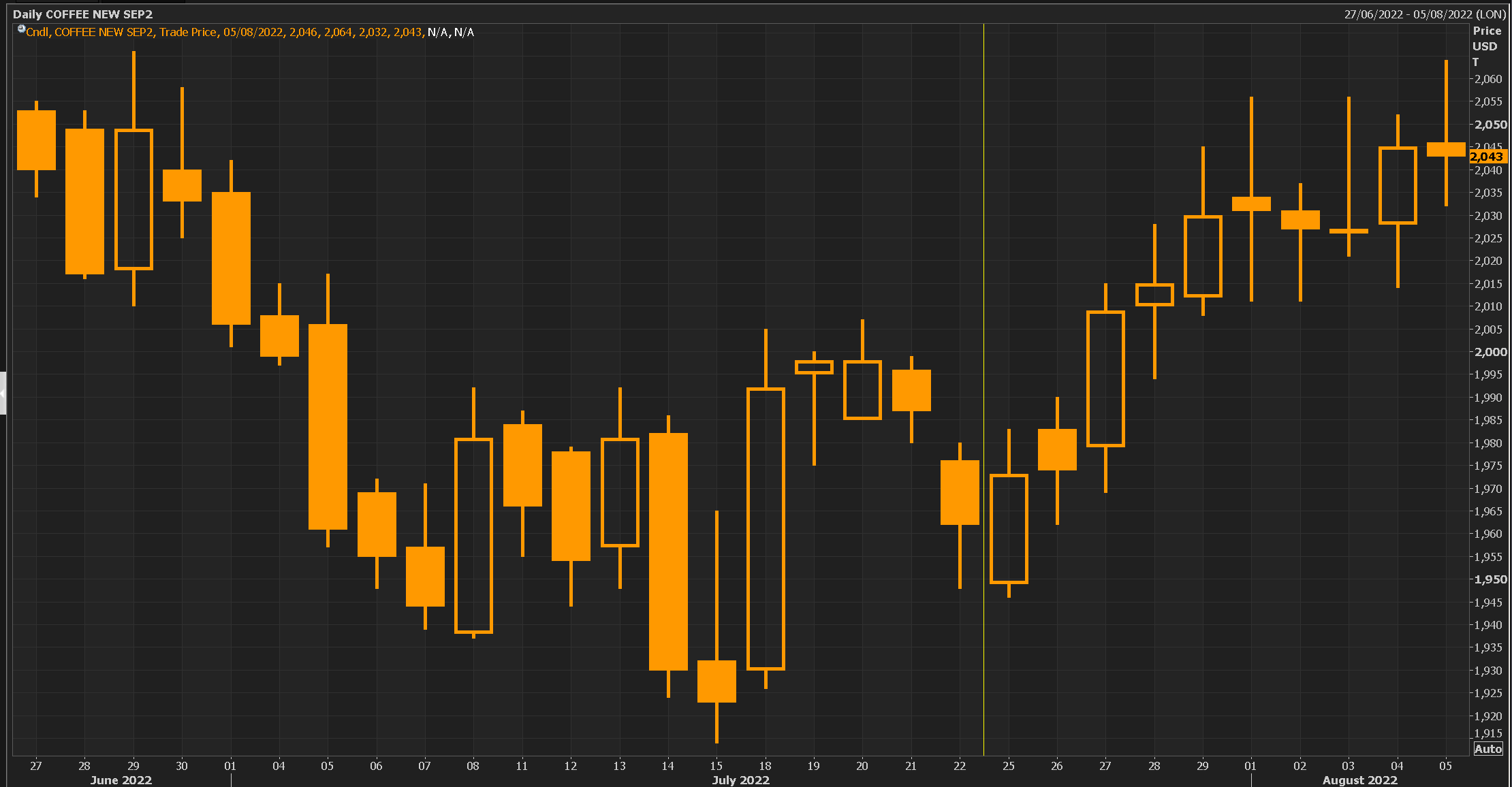 The Robusta market opened at 1,949 $/mt and tracked Arabica upwards despite low trading volumes as the specs covered their shorts. The 25th July had the period low of 1,946 $/mt and the high was taken on the 5th Aug at 2,064 $/mt. The 3rd of August saw a large daily range but closed very close to the open as a risk off approach was taken in response to tensions in Taiwan followed by a short covering rally in the same session. Overall, the market rose 94 $/mt over the fortnight.

The arabica harvest in Brazil is nearing 80% completion, which is lower than the historical average and the last three years. This is also the case for Robusta. Weather forecasts predict dry and above average temperatures. As each week passes without issues, the chance of a frost happening this year diminishes, so coffee buyers can breathe easy. Well, I say that, maybe wait just a bit longer as shipping agencies are struggling to agree on new reservations for containers in August and for September as space is in short supply. Like the UK, the Brazilian central Bank also raised interest rates by 0.5%, chasing inflation.

We currently have two members of the DRW Team in Peru sending information back to Headquarters. Heavy rains have caused a reduction of about 10% in the harvest which has delayed drying and is likely to affect cup quality. The high NYC, in conjunction with the delayed harvest and a reduced trickle of coffee down from the mountains, has resulted in ever higher prices. In some instances, this can lead to a drop in quality as producers are no longer incentivised to pay attention to their post-harvest handling of more speciality focused lots. Lots of suppliers have stopped offering new sales as they want to cover their outstanding physical obligations first. Internal differentials have risen considerably in the last three months, in a way not seen before. We are predicting that logistical delays throughout Peru and on the seas will cause late container arrivals to the UK.

Honduras has exported just over 4 million bags so far this year. In the last few years during July, August, and September they have exported a further 1 million bags, so we hope that it reaches the ‘famous 5’ million bags. However, there is a feeling amongst suppliers on the ground that sales and exporters will fall short of this, and reach 4.7 million bags, about 20% down on the 20/21 crop. 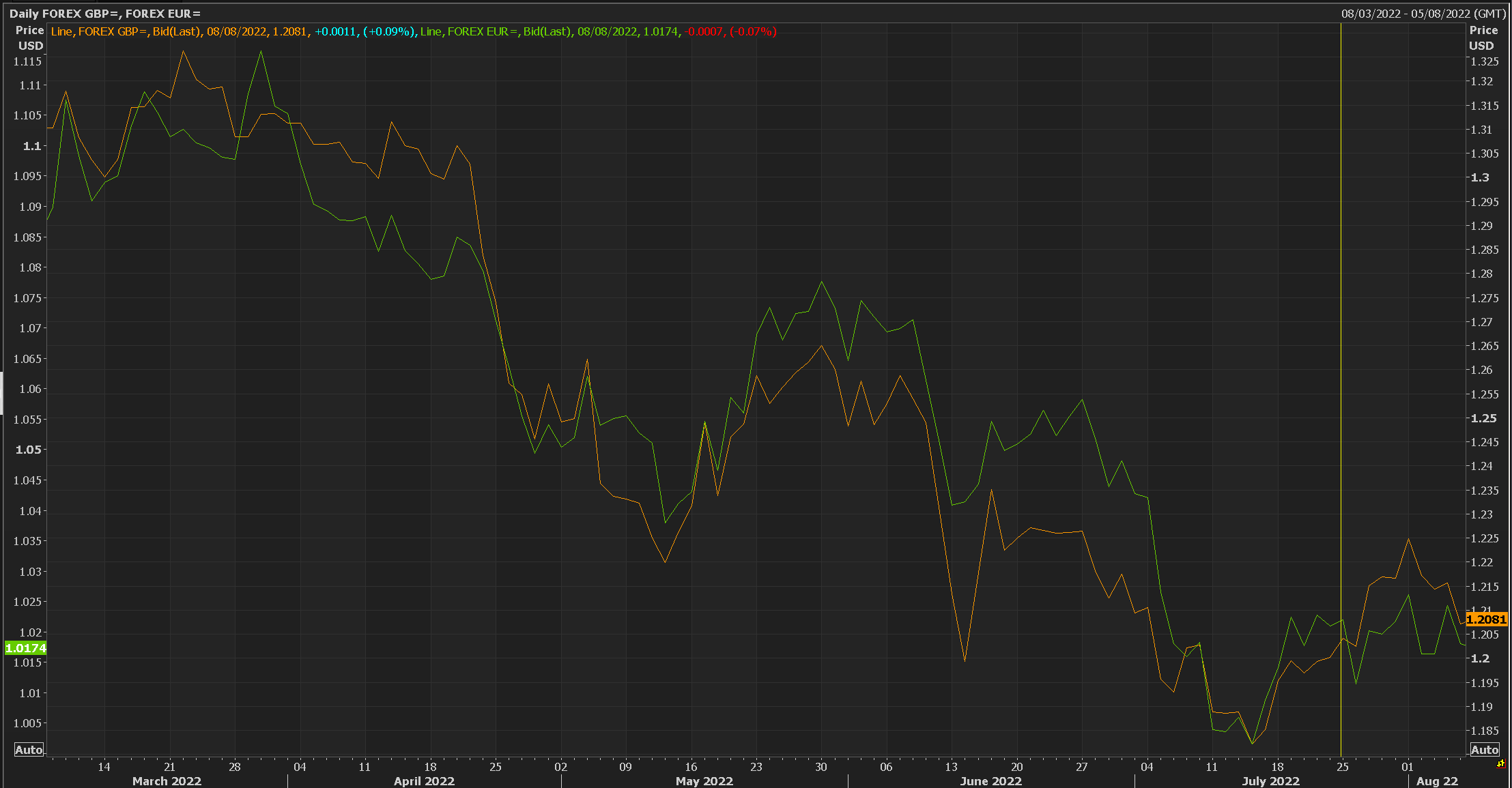 After the middle of July bottom, it looks like we might have seen the end of the lower lows. Towards the end of July both the Euro and the Pound strengthened against the Dollar and held these gains during the start of August. The Pound (in orange) started the period at 1.204 and Euro 1.021. The single currency value fell sharply as Russia announced they would be limiting gas supplies to the Eurozone. The Pound moved in the opposite direction as even though the FED raised interest rate by 75 basis points the market had already factored this in, and later comments from Powell were less hawkish than expected. The Euro and Sterling were able to make gains on the Dollar as later in the week it was announced that the US is entering a ‘technical recession’. The UK currency peaked against the greenback at 1.225 and the Euro at 1.214. In the UK the BoE hiked interest rates by 50 basis points, the largest single hike in 27 years. The BoE continues to walk the line between curbing high inflation and preventing a recession. The markets have already priced in more interest rate hikes for this year. Disappointing data from Germany (the powerhouse of the EU) saw the Euro slide in value towards the end of the period and closed below its open at 1.204. The same story for the UK allowed a slippage in value but it still closed above the period open at 1.208.