The devastating invasion of Ukraine caused shock waves the world round. In coffee, it triggered a bear run that continues apace. Monday 21st was a US bank holiday so the fortnightly open happened on Tuesday 22nd at 245.45 c/lb. On Thursday 24th when the invasion occurred, the coffee market lost 8.95 c/lb over the course of the day. Trading activity was slow on Friday and this continued after the weekend with the following Monday and Tuesday relatively quiet. Wednesday and Thursday saw big sell offs again and on Friday we closed the fortnight at 224.25 c/lb, 21.2 c/lb down on the open of the reporting period.

The invasion moved us into a risk-off macro environment and demand for safe havens like treasury bills and the US Dollar surged. Energy represents the largest chunk of the commodities pie so although coffee took a bearish turn, commodities in general rallied. Oil prices have risen to their highest price 2008 and this move is already translating to consumers with US Gasoline pricing at the pump going up 11% in one week.  Russia is a major player not just in oil and gas but also in many other commodities; Russia is the number 1 exporter of wheat, the number 2 exporter of Potash, the 1 exporter of barley and the number 2 exporter of Palladium and Platinum.

What is Potash? it’s used primarily in fertilisers to support plant growth, increase crop yield and increase disease resistance. Given Russia’s dominance of this product, we could see fertiliser costs go up even further for coffee producers. Russia and Belarus are the largest suppliers of fertilisers to Brazil, who could make up that shortfall? Brazil imports 80% of the fertiliser it uses so this is unlikely to be found locally.

The level of sanctions levied on Russia will impact each export differently but what is certain is that there will be more price rises across the board.

In the CFTC’s COT report with the cut-off Tuesday 22nd February  the Non-Commercials reversed the trend of the previous 2 reporting periods and reduced their Net Long position by 2,887 lots.

In the CFTC’s COT report with the cut-off Tuesday 1st March  the Non-Commercials again reduced their position by 4,834 lots to total 53,882 lots. This Fund Long Liquidation is a reaction to the ongoing conflict in Ukraine with no significant changes in coffee fundamentals.

The drawdown in Certified US Arabica stocks has abated somewhat. Stocks now stand above the psychologically important level of 1 million bags. Could this be that start of the restocking of ICE certified warehouses? 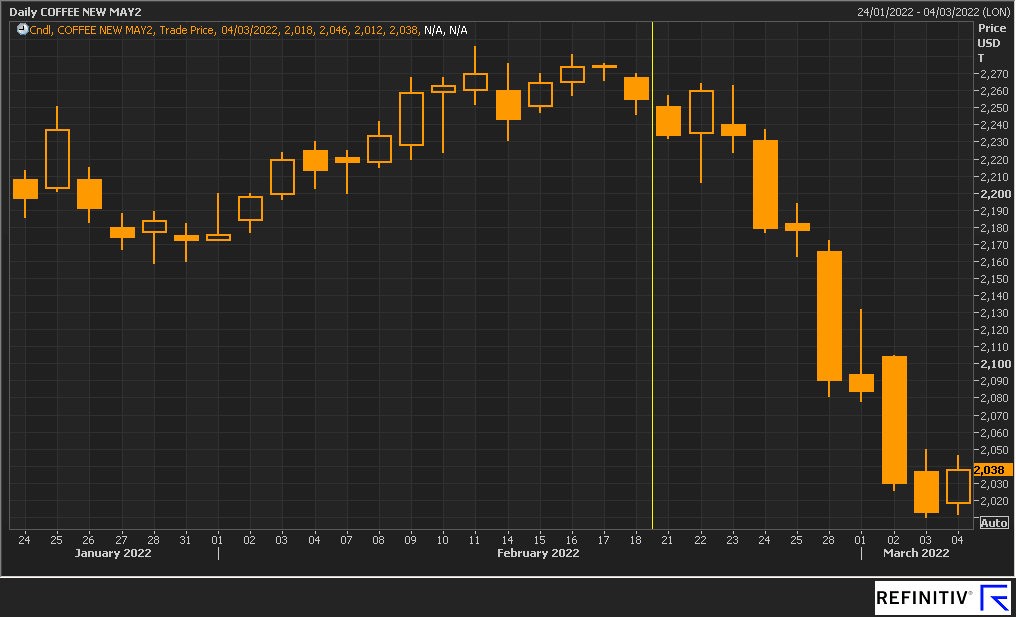 The Robusta market mirrored Arabica in its large sell off. It started the month trading at 2,251 $/mt and, after a quiet opening 3 days, started a big drop which was characterised by a big bear day followed by a day’s breather. This was repeated 3 times and was broken by the final day in our reporting period which saw Robusta claw back a little value and close the week out at 2,038, 213 $/mt lower than it started the fortnight.

We have already mentioned soaring costs in this report and this is not exclusively linked to the invasion of Ukraine. In Colombia, production costs increased by 40% in 2021. There are many drivers behind this figure but 2 dominate: labour and inputs.

All of these costs have ensured that Colombian pricing has remained firm, even with the NYC so high. Differentials never came down and it seems like they go up every month when we ask for pricing to be refreshed. This happened when La Roya devastated Colombian production over 10 years ago and many buyers moved their sourcing to Peru which had more affordable options. Could we see a repeat of this trend? The industry had to find substitutes during Covid when there was very little coffee leaving Cartagena and Buenaventura but everyone came back when the coffee flow started again.

In Nicaragua the harvest has already wound up for the year. This origin, like the rest of the region, started their harvest 6 weeks early. This meant that the shipping season also started a little earlier than usual and some shippers were able to take advantage of this traditional quiet shipping period and get some containers out before busy season started. It’s expected that although the shipping challenges will not be as bad as we have seen in Peru, they are due to worsen this month. In terms of volume it appears that this crop is 5% up on last crop which is welcome news as Honduras’ volume is much lower than the industry was expecting.

The 2021/22 harvest and shipping season was a difficult one in Peru. October and November, traditionally the busiest in terms of shipping, were very quiet for Peruvian coffee exporters with rolled and cancelled bookings dominating the narrative. Some shippers refused to take any bookings for the port of Paita in December and this led to a surge of exports leaving from the port of Callao. While this did help, it meant extra costs as many northern coffee exporters had to pay 4-5 US c/lb extra in security and transport to move the coffee to Callao, which is a much more dangerous port than Paita.

Generally by the end of January many industry folk can take holiday and also programme mill maintenance but this year exports are still trickling out. By the end of March all coffee should have left Peru but it won’t be long before the lower altitude new crop will be ready to ship again. 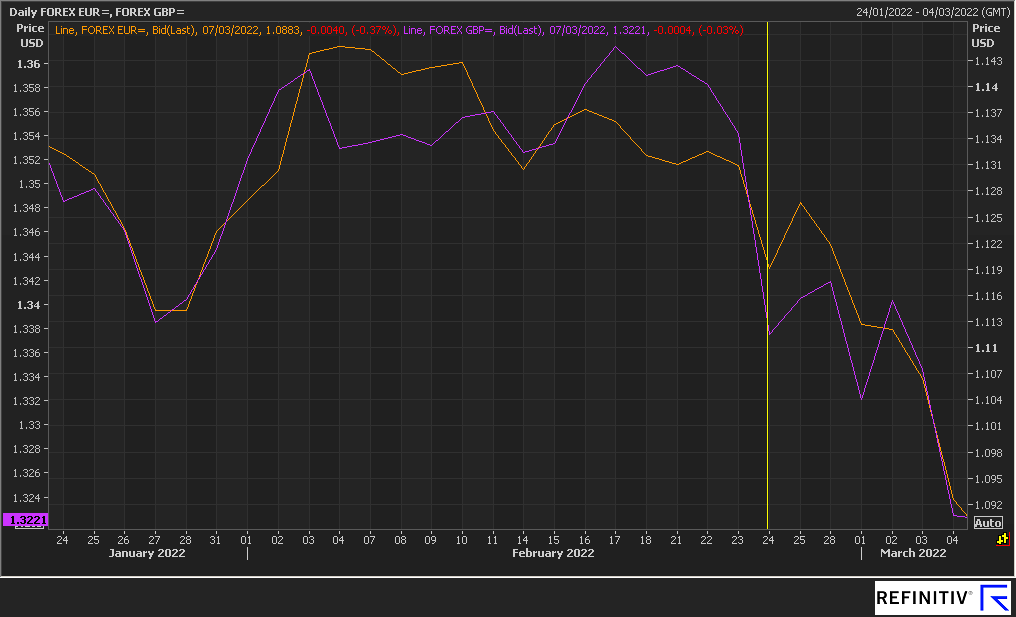 Russia’s invasion of Ukraine remains the primary focus of the markets and in this risk off environment, the Greenback is king. In times of uncertainty, investors love to park their money in the US Dollar and this time is no different: the US Dollar has risen to its highest level since Covid hit ravaged the world in spring 2020. Fears about the impact of Russia’s war against Ukraine are fuelling this demand. The US Dollar Index is now over 99 and given Europe’s proximity to the conflict, the Euro and Pound are suffering more than other key currency pairs.

European markets are not attractive at the moment given their geographical exposure to Ukraine and Russia and this has also been reflected in equities as British and European shares have fared significantly worse than US equities over the same period.

The fact that the Fed is signalling it will raise interest rates faster than the ECB and BoE will exacerbate this move. Expect the Dollar to be strong for the short to medium term. GBP/USD fell from 1.344 to 1.321 and EUR/USD fell from 1.113 to 1.09. Will we see parity between the Euro and US Dollar this year? Stranger things have happened. 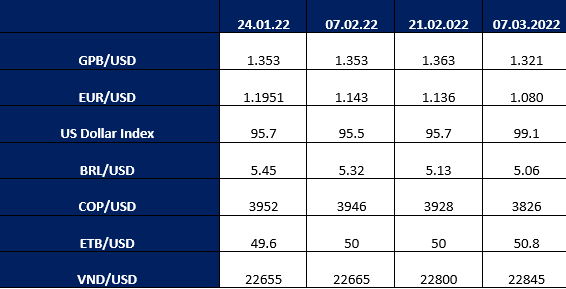