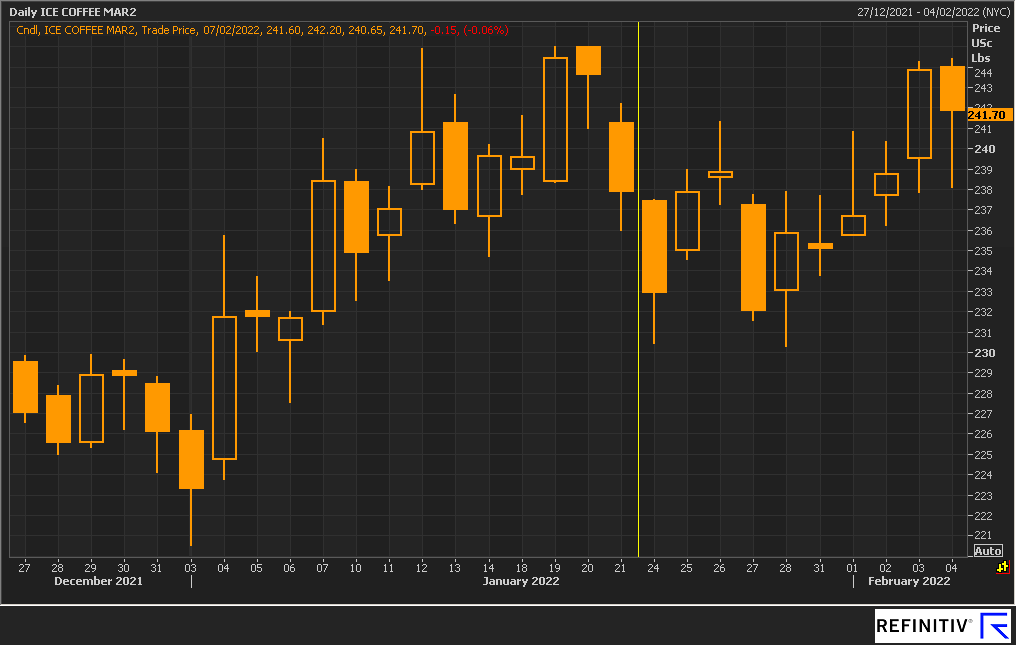 Arabica futures opened Monday 24th of January at 237.45 c/lb and finished the day 4.5 c/lb lower at 232.95 c/lb. The market ticked up to 241.35 c/lb on Wednesday 26th of January in front of the Fed meeting and on the back of rising European equities. Thursday saw a correction downwards, and Friday opened the day strong with the market bouncing up by 6 c/lb from the intra day low, but the early selling appeared to be mainly algorithm-based and the week finished at 235.90 c/lb.

The following week had a bullish sentiment supported by the data showing that the drawdown in certified Arabica stocks continued in January. The trade’s spot position is still quite light, and although the March/May contango is back, May/Dec terminals are still the other way, and if industry consensus is that the upcoming Brazil crop will be larger than expected, we may see this reverse. For now, rolling positions can be expensive.

In the CFTC’s COT report with the cut-off Tuesday 25th January there was not a huge change in the positioning landscape. The Non-Commercials decreased their net long position by 834 lots and the Net Index Long added on another 1,224 lots to total 46,162 lots Net Long.

In the CFTC’s COT report with the cut-off Tuesday 2nd February, the Non-Commercials again reduced their position by another small sum to shave off 398 lots and this left them at 46,624 lots Net Long.

The drawdown in Certified US Arabica stocks continued apace, with stocks currently sat at 1.11 million bags. This time last year there were 660,000 more bags knocking around. 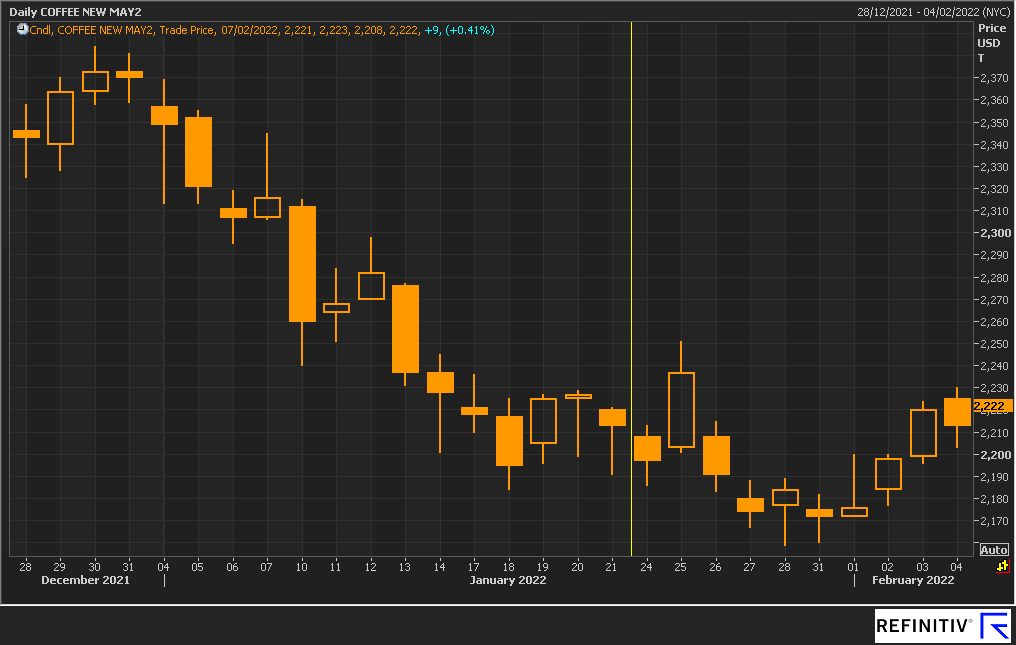 The Robusta terminal had a bullish end to 2021 but could not hold this momentum into the New Year and experienced a big slide over the course of January. However, it opened our reporting period at 2,208 $/mt and the next day ticked up to 2,251 $/mt! This would be the fortnightly high. It then continued its 2022 slide and finished the week at 2,184 $/mt. New year, new you? New month, new market. On February 1nd the market started to rise and continued like this for the next few days and, although Friday closed lower than Thursday, it still felt like the momentum had shifted in Robusta.

Logistics in Brazil remains challenging and, although towards the end of January bookings were starting to be made, most ETDs were for the end of February at the earliest. Many shippers offered April as their ‘prompt’ shipment month and the shortage of containers remains a key concern. CECAFE expects logistics to normalise towards the end of 2022. Rainfall has been consistent during the year to date, and this bodes well for coffee trees.

Comexim released its revised crop predictions for the 2022/23 crop, and they forecast that Brazil will produce 63.2 million bags (41.4 Arabica and 22.1 Robusta), representing a 16.6% increase on last year. Another salient point is that this year we are left with a carry-over of only 800 thousand bags, which is rather low when compared to the 5-year average. The Brazilian Monetary Policy Committee (COPOM) raised its primary rate (Selic) by 150 basis points from 9.25% per year to 10.75% per year, to control high, persistent and widespread inflation across the Brazilian economy.

Honduras, Central America’s biggest producer of coffee, appears to be experiencing a much smaller crop than last year. We’ve canvassed some opinions across the departments of Copan, Ocotepeque and Marcala and estimates range between 40-60% down. The combination of higher input costs and a low NYC led many producers to not look after their farms like they have previously. This is observed even with speciality producers who have been producing top-scoring lots for many years. The market is difficult for cooperatives, as many of the big multinationals are short and they are paying producers very high prices to cover for coffee that is of very average quality. As a result, many people are opting for the short-term gain via that route and not separating out their top lots for the international market like they usually do. Xiomara Castro was sworn in as Honduras’ first female president, we hope that she successfully navigates the political crisis she currently faces.

In Vietnam, there is typically a great deal of selling before the week-long Lunar New Year Holiday (Tet) but this year business was slow. Prices are declining on increasing supply, but demand remains quite static. Prolonged supply chain disruptions have contributed to a flat trading environment and some business has gone to other Robusta origins. However, international freight rates have come down from the lofty heights of yesteryear and this is expected to boost trade when people return after the Tet celebrations. 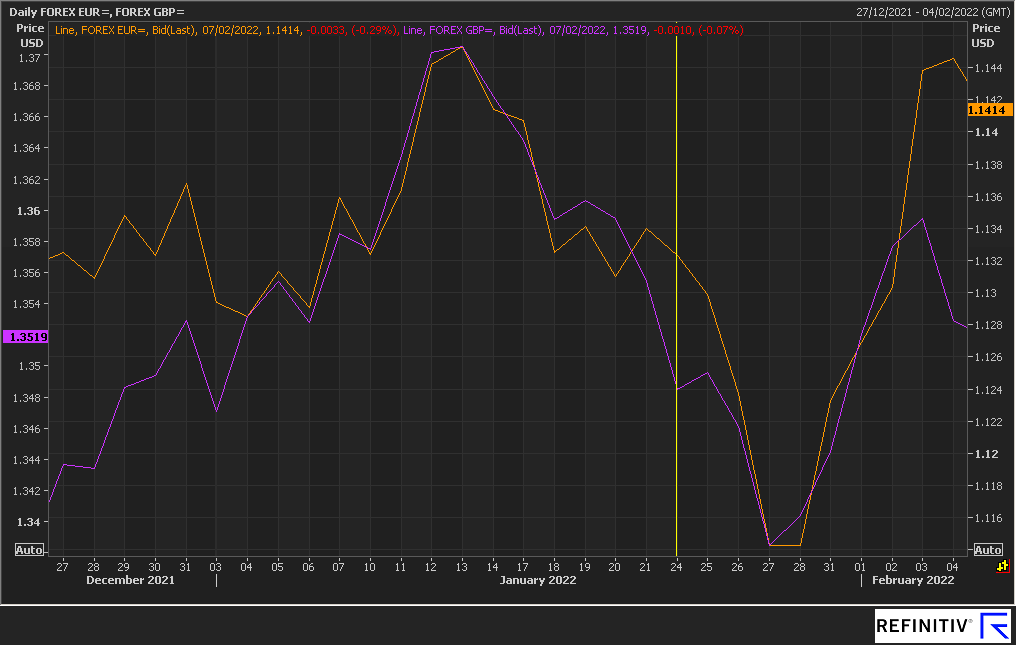 In this report we have changed the format of the FX section and combined the GBP/USD and EUR/USD graphs. We decided to do this as we often talk about how they behave in relation to each other and thought it would be easier if all the data was on one graph. The line in purple represents GBP/USD and the line in yellow represents EUR/USD.

Inflation, inflation, inflation. This is on the lips of central bankers across the world, and they are all starting to use the tools in their monetary toolbox to fend off the enemy that is inflation. Whether or not it’s their fault with all the printing that they have been doing is beside the point, inflation is no longer considered transitory, and banks need to get a handle on it. The Bank of England announced its second interest rate rise of the winter (to 0.5%) which is the first time it has raised rates in back-to-back meetings since 2004. As mentioned earlier in the report, Brazil has raised interest rates to nearly 11%. The FED is also expected to raise interest rates further and Goldman Sachs thinks the benchmark could hit 1.25%-1.% by the end of the year.

GBP/USD started the fortnight trading at 1.357 and EUR/USD at 1.124. The Fed announced it would likely raise rates in March and this saw both the Euro and Pound slide for the days that followed, hitting a floor on Thursday 27th of 1.335 and 1.15. The rebound of the FTSE, and the fact people thought the BOE would raise rates the following week, saw the Pound recover before the Euro. But the Euro did follow and, by the end of the month, had regained nearly all the value it had low with the Pound still flagging to finish at 1.351. Central bank announcements look certain to dominate the currency narrative of 2022. 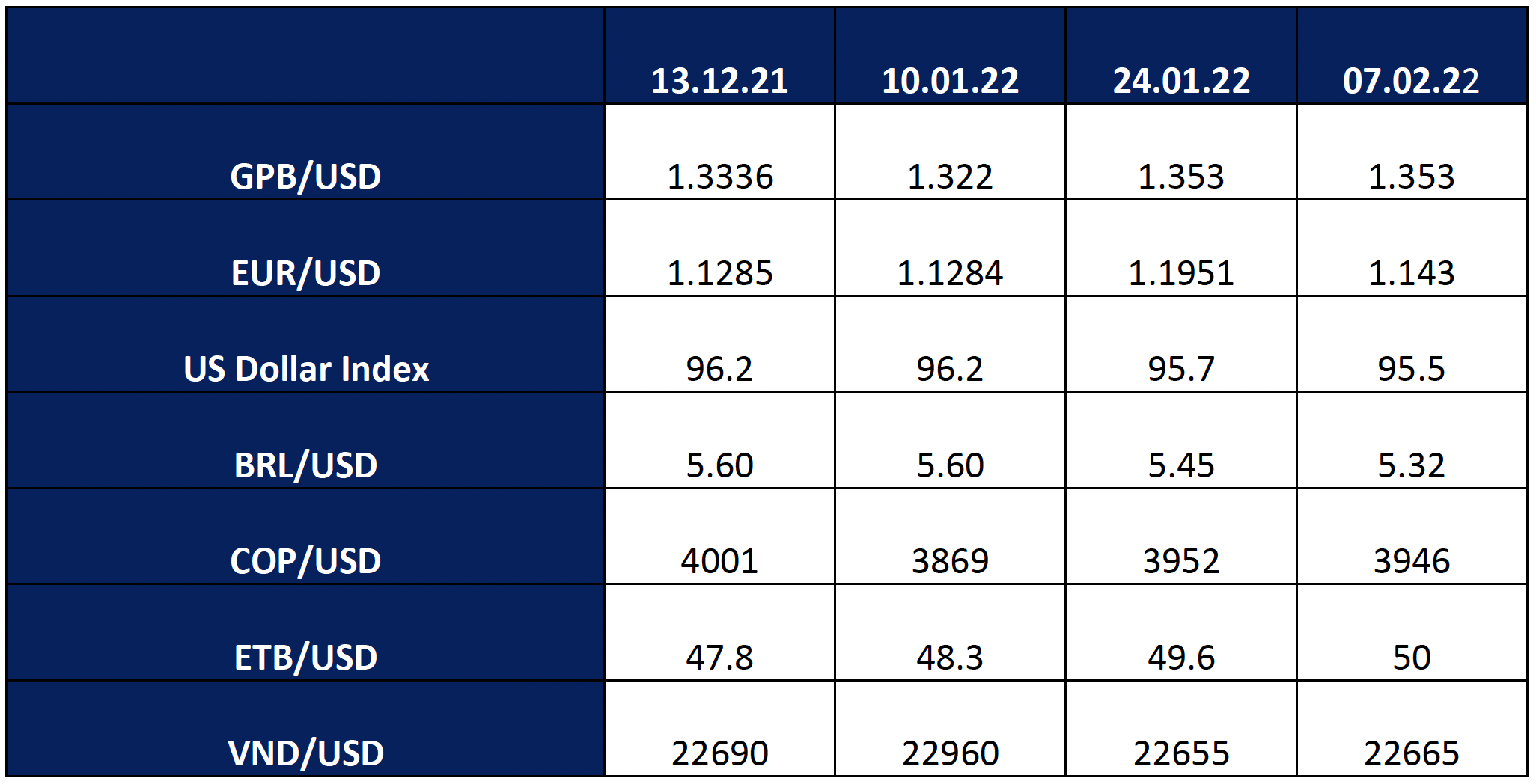