Good day. Welcome to the fortnightly DRWakefield Coffee Market Report for the period covering Monday 20th of September to Friday 1st of October. This report touches upon the Arabica and Robusta coffee futures market, currency pairings and news from origin. For clarity on any terminology used in the below coffee market report, see our Market Report Terms page. 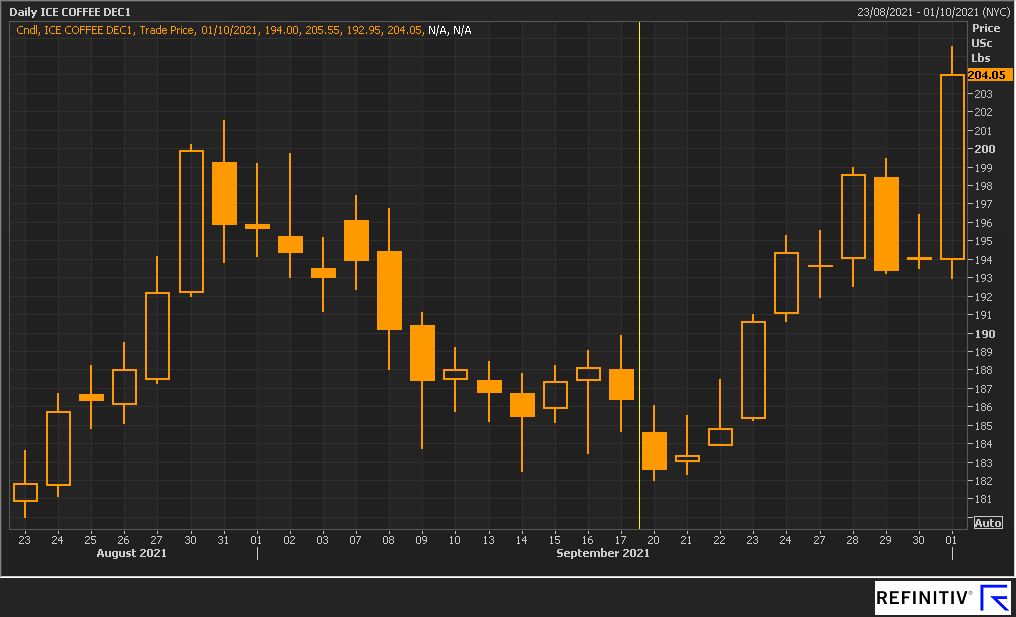 Arabica futures opened at 184.60 c/lb on Monday, 20th of September. The low of the day at 182 c/lb would be the lowest level of the following two weeks. Just how the talk of the town was frost a few months back, now rain dominates the headlines and the irregular rainfall in Brazil coupled with anxiety surrounding if, or when, more would arrive fuelled the bullish sentiment. Friday 24th saw the Arabica coffee market close at 194.35 c/lb, 9.75 c/lb higher than it opened the week.

9.75 c/lb seems paltry when you compare it to the coffee market action of October 1st however, when we saw the marking of International Coffee Day with a rally of 10.05 c/lb!  That Monday, New York opened at 193.60 c/lb and on both days that followed it would try and test the 200 c/lb level, but fell short on both occasions, hitting a high of 199 c/lb on the 28th and 199.45 c/lb on the 29th. The market took a breather on the Thursday, before surging on Friday off the back of concerns about rainfall in Brazil. It smashed through the 200 c/lb resistance level, and this attracted a new wave of buying from funds and speculators, leading us to a high of 205.55 c/lb before closing at 204.05 c/lb.

In general commodity markets are in chaos, with the stop-start, uneven nature of global economic recovery, making it very unpredictable what commodities are in demand and what are not. The transition to greener energy is changing traditional demand patterns and disruptive weather events are having larger effects on supply than anticipated. What this could mean is that, even though many commodities are on a bull run, the causes are very different to the last commodity supercycle which was largely fuelled by increased Chinese output and demand.

Perhaps we are not entering another commodity supercycle, but an environment that sees some of the commodity basket components diverge more than ever before? Oil crossed $80 a barrel for the first time in three years last week. It will be interesting to see what correlation, if any, there is between oil and coffee.

In the CFTC’s COT report with the cut-off Tuesday 21st September the non-commercial net long position increased by 2,318 lots to total 51,964 lots. This contrasted with the index traders’ position which shaved 4,289 lots off the net long position – a sign that funds are looking to reduce their exposure to coffee in search of other commodities?

In the CFTC’s COT report with the cut-off Tuesday 28th September the non-commercials again built out their long position by 3,368 lots to 55,332 lots Net Long. Given the activity of October 1st, it’s likely this long position will be even bigger when the next COT figures are released.

Certified Arabica stocks have dipped since the summer. In August there were 2.17 million bags, and we enter October with 2.08 million bags. 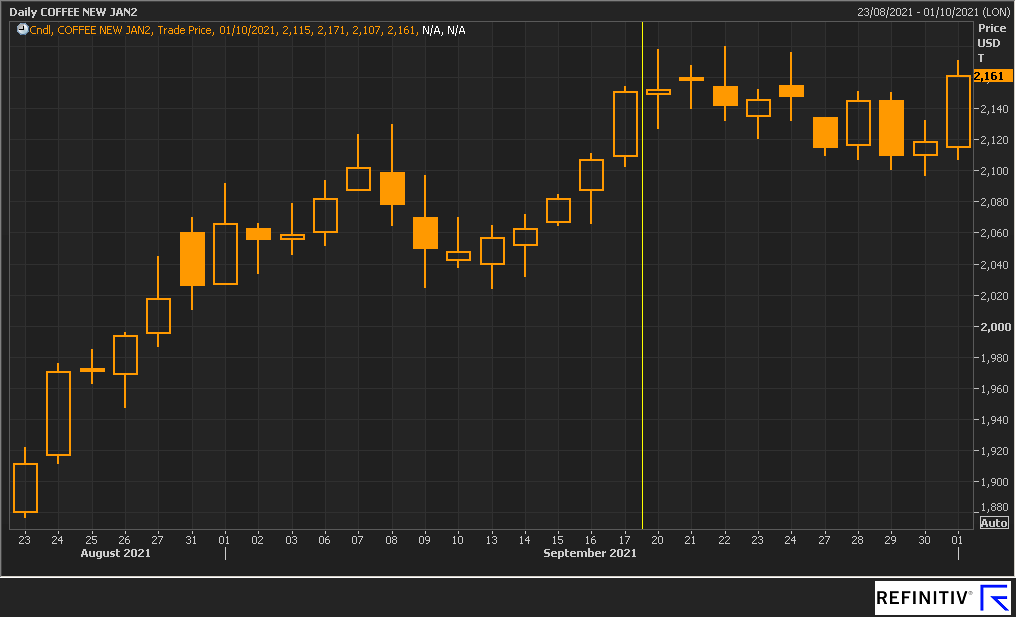 The Robusta coffee market opened the fortnight at 2,149 $/mt and broadly traded in an 80 $/mt range for the 2 weeks that followed. It closed the fortnight at 2,161 $/mt on October 1st, 12 Dollars higher than how it opened on Monday 20th of September. Like Arabica, Friday 1st was the most active trading day of the fortnight, but there was less speculator participation which took the sting out of the Robusta rally.

Rainfall was below historical averages for Brazil this September and coffee plants are suffering. To ensure there is a good flowering for the 2022/23 crop it’s essential that soil moisture is replenished. There has been isolated rainfall in certain coffee areas in Minas Gerais, but an increase in precipitation volume and breadth is not expected until the 1st half of October. The harvest of this crop is nearly complete, with only a few high altitude areas still to be picked.

Talking of rain, Western and Eastern Kenya remain dry and also warm; temperatures remain in the high twenties. However, the Centre has received sporadic rain showers and is much cooler with more rain expected to follow.  Only 3,400 bags were on offer at the auction on Tuesday 28th of September. Pricing has increased significantly, with much demand for the small amount of physical on offer with larger traders covering their short positions.

In Colombia, President Ivan Duque signed some of the tax reform documents that provoked the national strikes across the country earlier this year. The President highlighted the Social Investment Law as ‘the most important social transformation of this century in Colombia.’ Financially, Colombia is struggling and this reform was seen as one of the key ways to help balance the books. The reform would have removed many VAT exemptions and lowered the threshold for paying income tax. Although it was criticized domestically, income-tax revenues in Colombia are among the lowest as a share of GDP in the OECD (Organisation for Economic Co-operation and Development), so this was seen by the government as a necessary move. More strikes are planned, let’s hope we don’t see disruptions to the flow of coffee like we did in spring and summer. 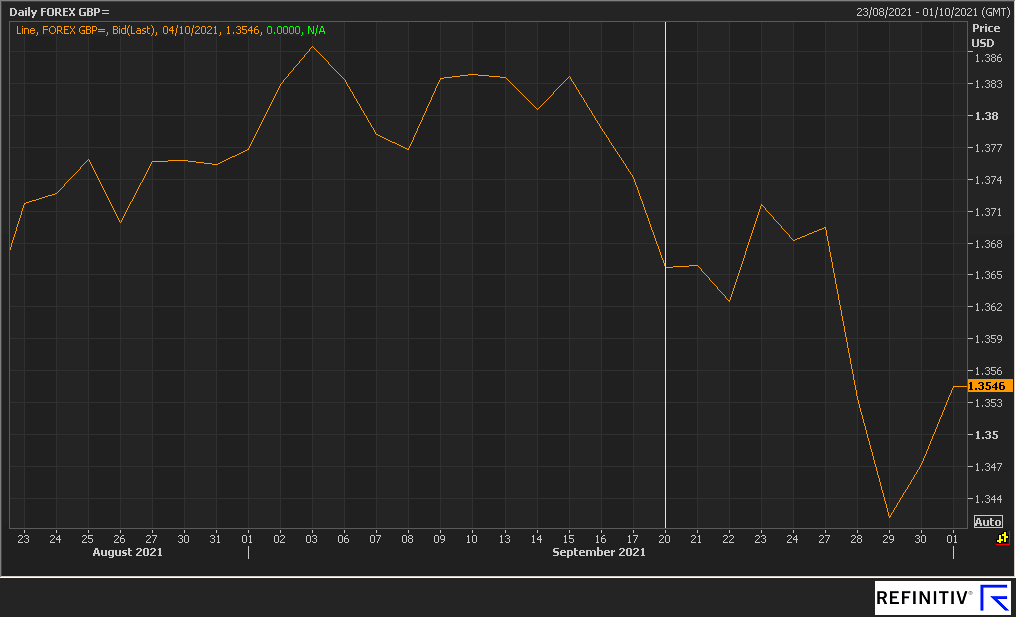 The Cable started the fortnight trading at 1.365 and dipped to 1.362 before rising to 1.371 on Thursday 23rd of September: this represents the high of our reporting period. The Bank of England (BoE) at its monetary policy meeting kept its main interest rate unchanged at 0.1% and stuck to its 895 billion pound asset purchase target. Although there was no rate change, the BoE remains on track to raise interest rates in the first half of 2022 and this provided support to the Pound, rallying against the Dollar to finish the week strong at 1.368.

However, this strength was not too last. UK September retail sales dropped sharply, falling well below forecasts and fragility crept into the Pound narrative. Soaring energy costs and supply disruptions fuelled this fragility and precipitated a fall to an 8th month low of 1.343 on Wednesday 29th of September. The Pound did recover, but could only reach 1.354 before Friday’s close. 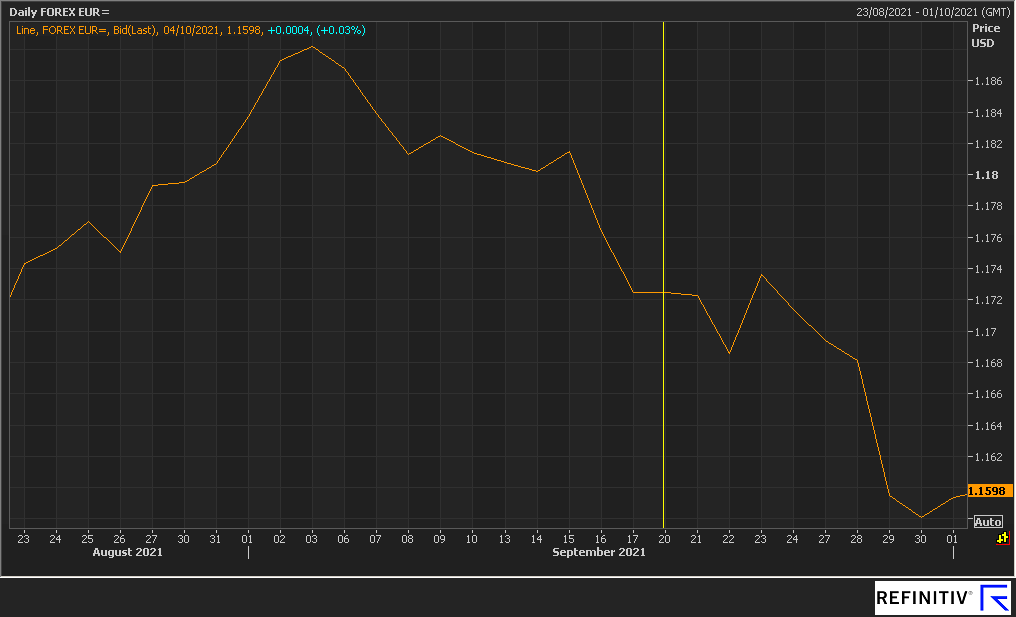 On Monday 20th of September EUR/USD opened at 1.172 and, like the Pound, lost value against the Dollar over the opening days of our reporting period. It strengthened to 1.173 on Thursday 23rd and this would be the highest level observed for the rest of the fortnight.

Dollar strength saw the Euro steadily lose value for the remainder of the fortnight and this trend was strengthened as German election results came in with Germany’s centre-left Social Democrats (SPD) claiming victory in the federal election. The markets enjoy the stability that Merkel brings and, should the SPD govern, it will need to find coalition partners, which could take some time. EUR/USD finished Friday October 1st at 1.159.