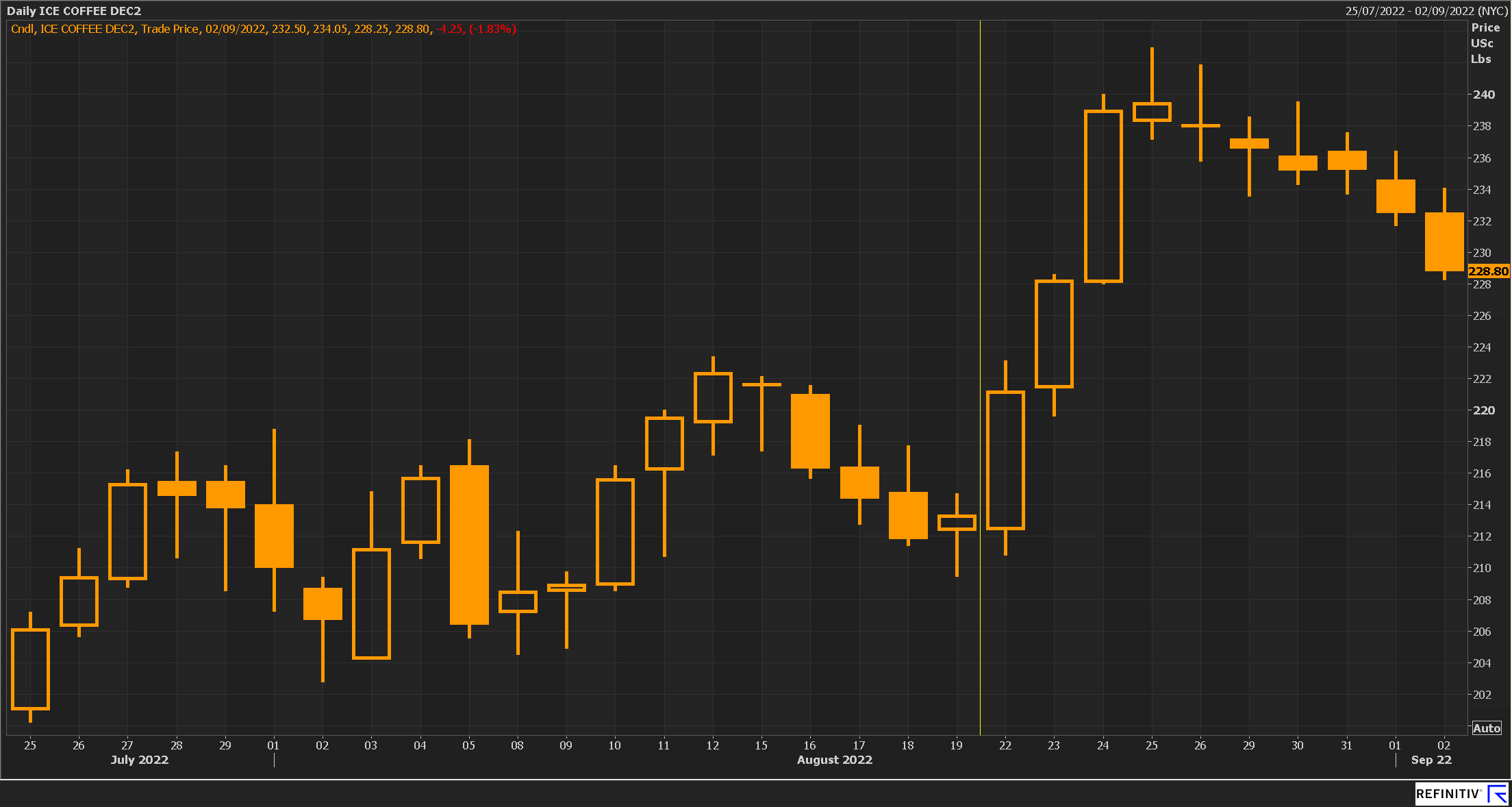 Monday 22nd August, the first day of the period opened at 212.40 c/Ib and spent the day rallying to close at 221.20 c/Ib. The next four sessions witnessed the same upward momentum as the First Notice Day approached on the 23rd August, market participants switched from the September terminal to the December terminal. Prices were further driven up by specs taking a long punt, with the belief that there will be a period of low origin sales. Like many other countries around the world the coffee regions of Brazil had a very dry August which prompted rainfall fears to join the rally mix. As the old song by The Commitments goes, “rainfall rally, guess you won’t slow that market down”. By the 25th of August the NYC tipped a high point of 242.95 c/Ib. As the market reached highs last seen at the start of July, opinions that it had entered an overbought stage, and as frost concerns lessened, prices came off slowly. The final day of the period, Friday 2nd Sept saw the largest downward movement, closing on 228.80 c/Ib.

The CFTC’s COT report with the cut-off Tuesday 23rd August showed the non-commercials increased their net long position to 23,777 lots and the commercials pushed further down on their net short to -67,547 lots.

Certified US Arabica stocks fell further to 0.64 million bags. We’ve said many times over the year, that this sits well below the averages over the last 10 years, and it certainly doesn’t look like that will change any time soon. Robusta stocks have refound their resting place from the beginning of the year sitting just below 1.60 million bags at 1.58 million bags. 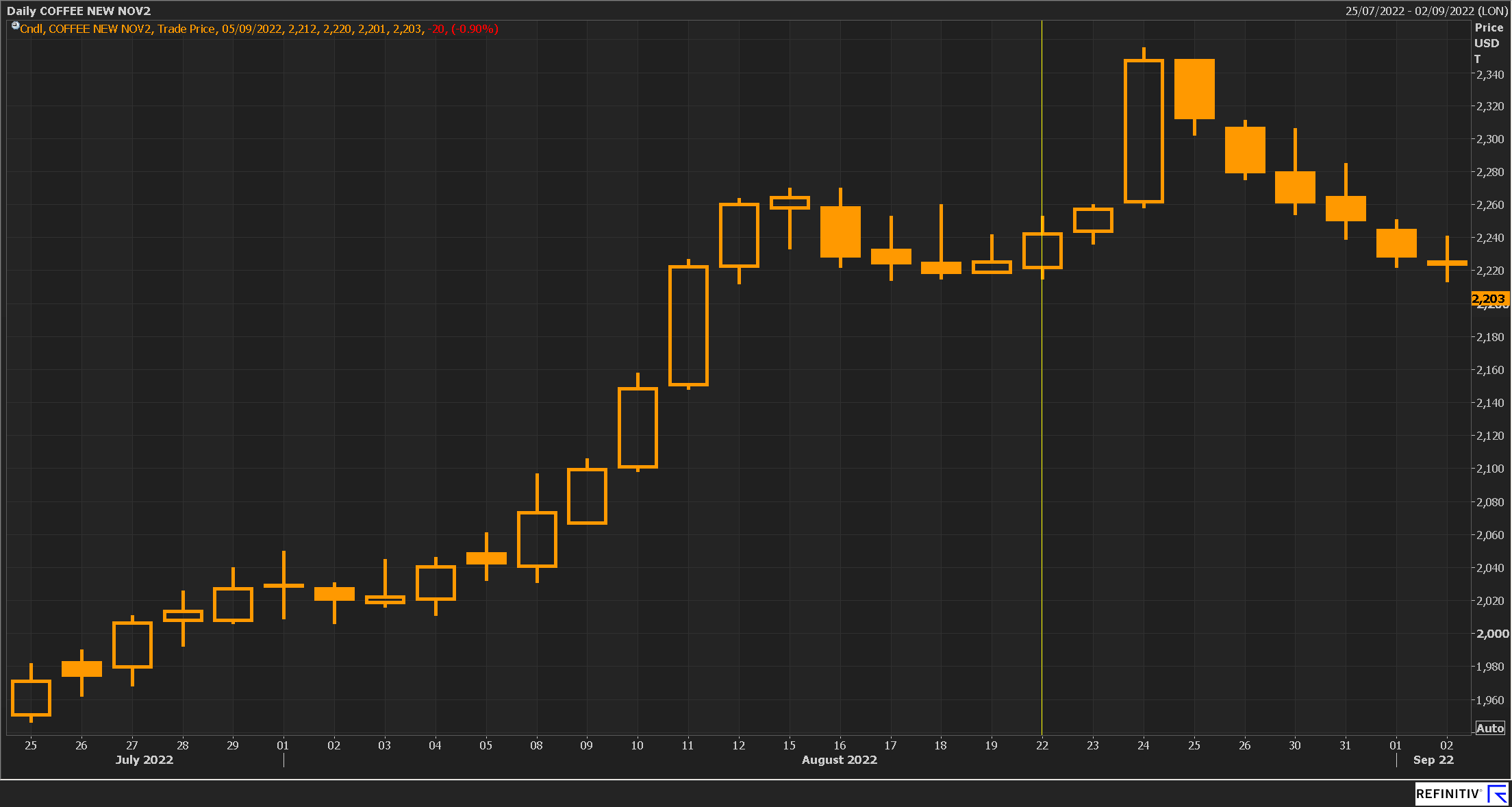 The Robusta market followed a similar trend as the NYC this reporting period, with a bull run up to the 24th and 25th August, which then tapered off over the subsequent week and a half. However, unlike Arabica, the movement was less extreme. On Monday 22nd August the market opened at 2,221 $/mt and traded upwards for three days. The biggest trading day was Wednesday 24th August, opening at 2,261 $/mt, hitting highs of 2,355 $/mt before closing at 2,348 $/mt, 87 $/mt higher than open. This spike was triggered by reports of Robusta stocks running very low in Vietnam, who are the world’s biggest producers of Robusta, and the bull run in the NYC helped to push it up further too. The tide turned the following day, and the market eased steadily down over the next 6 trading days as fears over a shortage of stock in Vietnam eased. By the final day of this reporting period, 2nd September, the market had returned to almost exactly what it opened at a fortnight prior, at 2,223 $/mt, just 2$/mt up.

Another cold front is currently passing through Brazil, this time it is travelling along the coast in the Southeast region. However, no significant rains or frosts are expected. The forecast in the main coffee-growing regions of the country is colder than average with below average rainfall also expected for this time of year. This has the potential to be problematic for the 23/24 crop. Flowering has already started in many regions, but the lack of rain forecast could be troublesome. By mid-September flowering needs to be supported by heavy and consistent rains. If this does not happen, then it could spell lower volumes for the 23/24 crop than are hoped for. After a lower volume crop this year, 22/23, the prospect of the following crop being smaller than originally expected too, sent the NYC skywards.

In Colombia it looks like we could be seeing the increase in differentials finally slowing down, and maybe even turning the tide. Having reached heights of more than +80 c/lb at the peak of summer, they are now standing slightly lower at around +76 c/lb for Excelso EP. However, these differentials are still historically high, and a good 20 c/lb higher than this time last year. This combined with the high NYC and strengthening USD means that the easing on Colombian differentials is unlikely to make an impact on the overall price of Colombian coffee here in the UK.

Similarly, in Peru differentials are looking high relative to where they historically have been. Currently sitting at +40 c/lb, this is a huge change from where they were 3 years ago, pre pandemic, when they sat between +5 c/lb and +10 c/lb. Peru has been experiencing an increase in demand as many roasters are looking to Peruvian coffee as an alternative to Colombia, where coffee continues to be increasingly expensive. This, plus a significant drop in crop volume this year (about 30-40%), has been pushing up the differentials. The lower volume also means that currently many Peruvian producers and exporters are hesitant to offer coffee until the harvest is finished and they can assess exactly what coffee they have to offer. 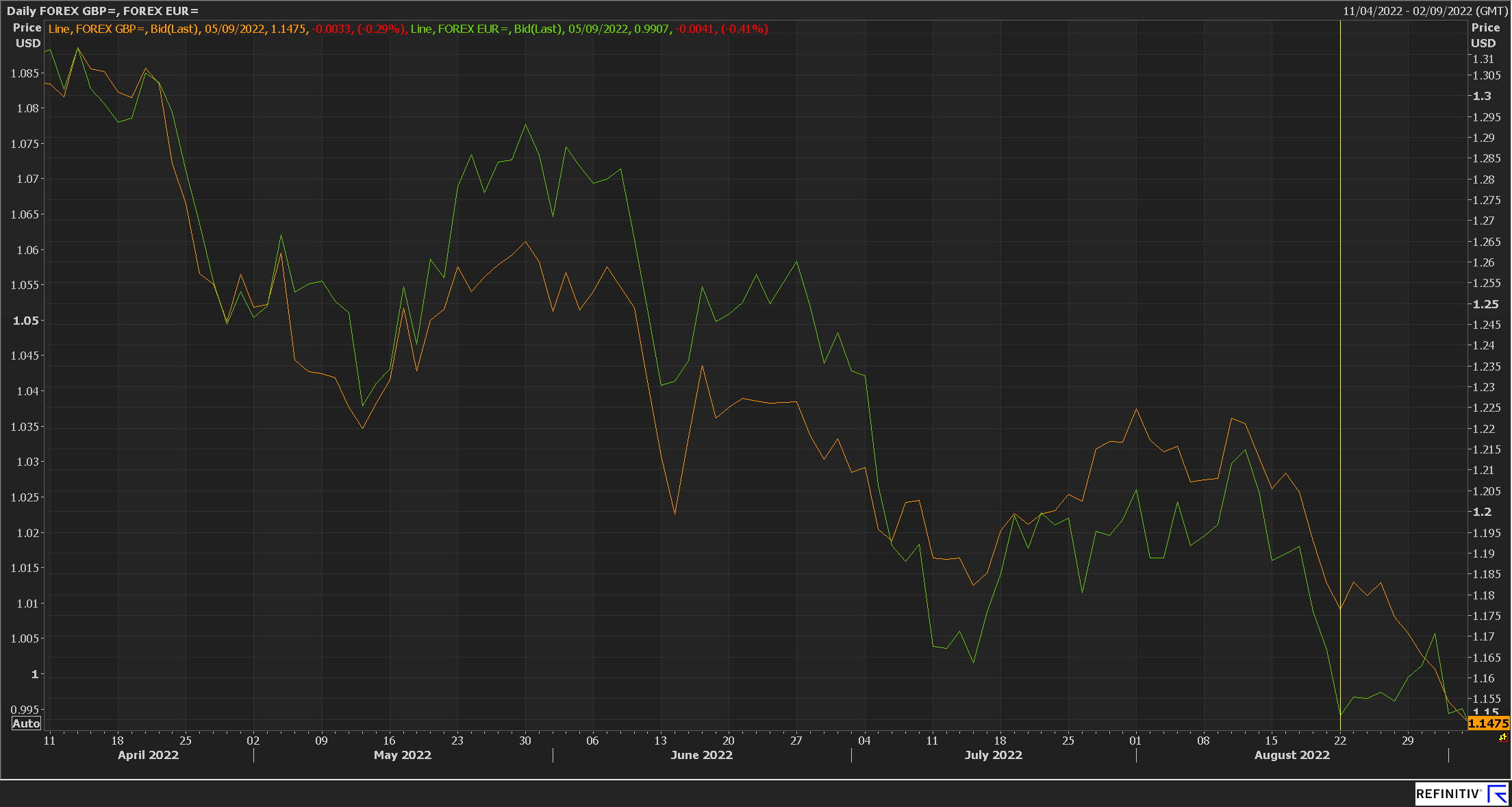 Both Sterling and the single currency have been sliding down on a bear market since March with Sterling starting off the period at 1.177 and rather shockingly the Euro at 0.095. The Euro sitting below parity with the Dollar is a significant challenge for many. The European energy crisis wears on and Germany, Europe’s biggest economic powerhouse looks set to enter into a recession. The Fed is likely to continue raising the interest rate throughout September and probably further into Autumn although some take the opinion that there will be a slow down in the pace of rate hikes, as to avoid a drop in liquidity in the larger market. On the 22nd August the DXY hit 108.95, although, at the time of writing, the DXY was actually peaking over 110.13. To put this into context, the historical height is 164.72 in 1985, but it has languished in the playground of low, below 110 since January 2002. Both the Pound and Euro were able to claw back a small bit of ground from the Dollar during the start of the reporting period. The greenback fell as economic data showed the US home sales fell in July and private sector activity contracted. The pound reached a height of 1.18 3 and the Euro went to the upside of 1.005 but as the days wore on and Chairman of the Fed Jerome Powel incited a risk-off approach with his speeches, US currency strengthened. The UK house price index has risen over 10% which is more than the markets were expecting, adding to the Pounds slump. It rounded out the period at 1.147 and the Euro ended where it started at 0.095.