This report touches upon the Arabica and Robusta coffee futures market, currency pairings and news from origin. See our Market Report Terms page for clarity on any terminology used in the below coffee market report. 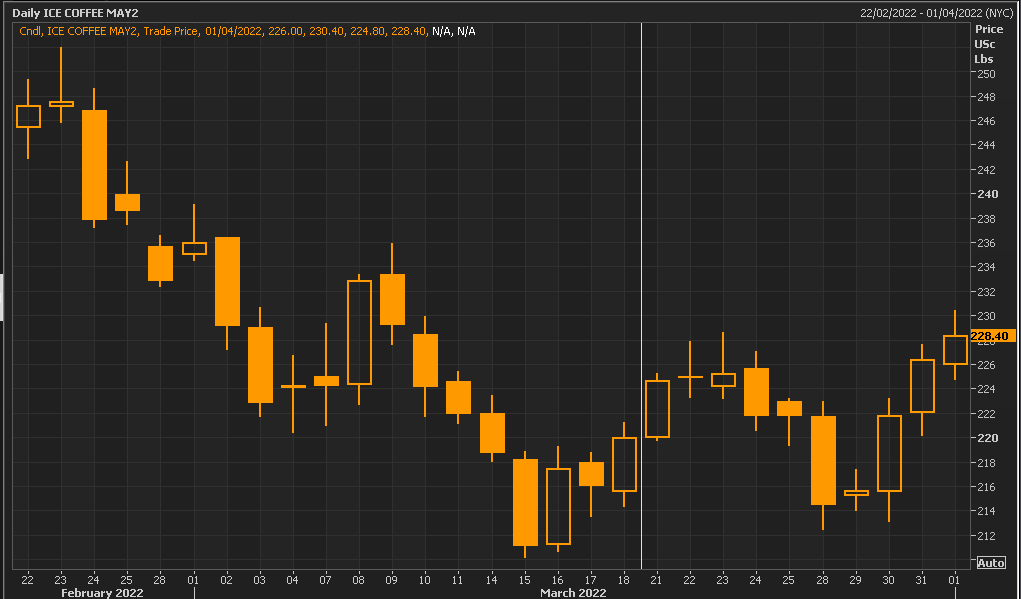 The Arabica market opened on the 21st March at 220.05 c/Ib and came under some upward pressure, pushed up by short covering. Questions were raised as to whether we would see the previous resistance band of 234 c/Ib tested. This wasn’t to be, and the market maxed out at 228.65 c/Ib on the 23rd before dropping the previous gains over the next three days. A downward movement occurred on the 28th, falling from an open of 221.75 c/Ib to 214.55 c/Ib as commodity markets across the board reacted to Shanghai lockdowns. The technical outlook and positive feeling about Russia-Ukraine talks allowed buying to resume, which gained some momentum, from which an uptrend formed over the next three sessions. The period high was claimed on the 1st April at 230.40 c/Ib, but prices closed slightly lower at 228.40 c/Ib. We go into the start of April with prices rising further.

In the CFTC’s COT report, with the cut-off Tuesday 29th, the non-commercials continued their trimming and stopped their net long on 15,734 lots. The commercials also reduced their net short to -58,557 lots. Overall OI rose 5,375 lots.

Certified US Arabica stocks fell slightly back to just below 1.1 million bags, and Robusta Certified stocks rose to 1.59 million bags. 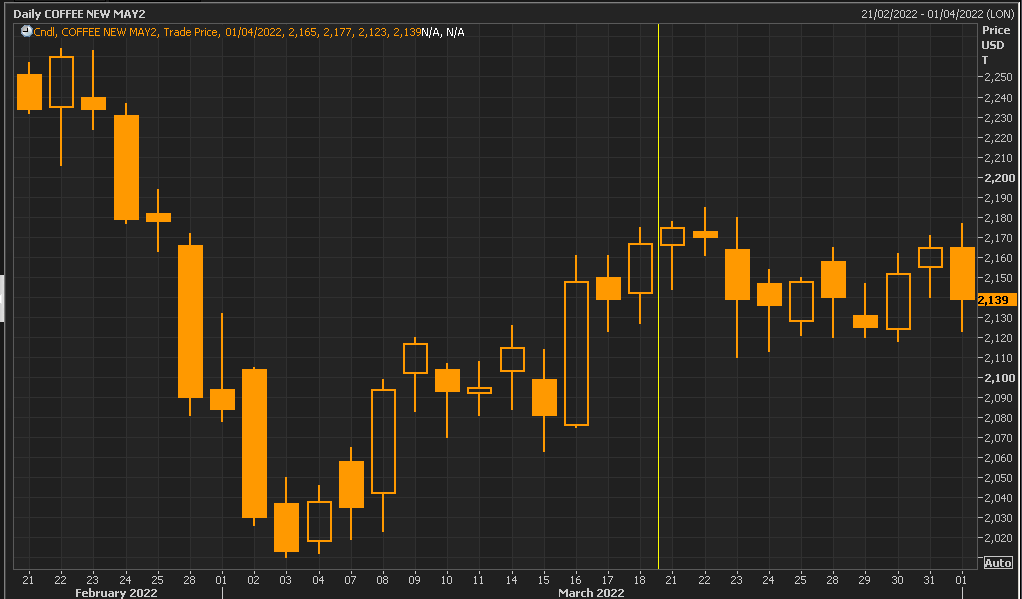 The Robusta market took a very steady course over the fortnight, only varying by 75 $/MT. London opened on the 21st March at 2,166 $/MT and fed off the Arabica buying momentum, fuelled by the crude oil market and the Brazilian Real positivity. The period high came the following day at 2,185 $/MT but overall closed lower than it’s open. The 23rd was a day of two halves, and the beginning threatened new upside potential, but this wasn’t to be realised, and as the day wore on, it ticked lower. The following day and all remaining days of the period traded sideways, inside the range of the 23rd. This is known as a period of consolidation and can have a cyclical effect as participants are reluctant to sell or cover, having not been able to achieve the gains they had hoped for.

Even though the Brazilian 2022 harvest is yet to start, the markets are looking towards the 2023 crop. So far, the vegetative growth has been very good, and grain filling has benefited from adequate rains through Brazil’s summer season, promising a healthy volume for next year. This year’s crop is less positive, as we still see the damage caused by the frosts in July 2021. The supply of coffee out of Brazil is still gaining traction as shipment issues continue to ease. Shipping in break-bulk has proved to be a worthy tactic. As exports flow out of Brazil, foreign dollars continue to roll in, putting downward pressure on the Brazilian Real. It’s dropped around 8% from a month ago (please see the currency table at the bottom of the report). This drop reduces the farmer’s incentive to sell, which keeps diffs moving to the upside.

In El Salvador, the harvest is almost reaching its end. According to the Salvadorean coffee council, there is an 18% increase in total production compared to this time last year. The farm preparation activities have begun for the 2022-2023 crop, starting with pruning, pre-flowering fertilisation and others. The biggest concern among the industry is the huge impact of the increase in the cost of fertiliser, electricity, and oil. The price increase ranges from 40% to 80%, depending on the product. The logistic problems tend to be more fluid this crop than last year, as the accessibility to bookings is much faster at the moment. The increase in the NYC market has benefited producers to cover the increasing production cost and, in some cases, to be able to invest back into the farms. Crop expectations are positive for the 2022-2023 crop, with the expectation that the country’s total production will continue to increase if they have a good winter.

Vietnam has also been benefiting from improved logistics. Their exports are nearly 20% up compared to the first three months of last year – the equivalent of around 9 million bags. Estimates of farmers having sold 70% of their crop reside, and growing conditions for the new crop prove adequate. Some areas have been dry, so those with the means have been irrigating. Fertiliser prices have risen 200-250%, and Russian-based clients have struggled to send documents and pay invoices. 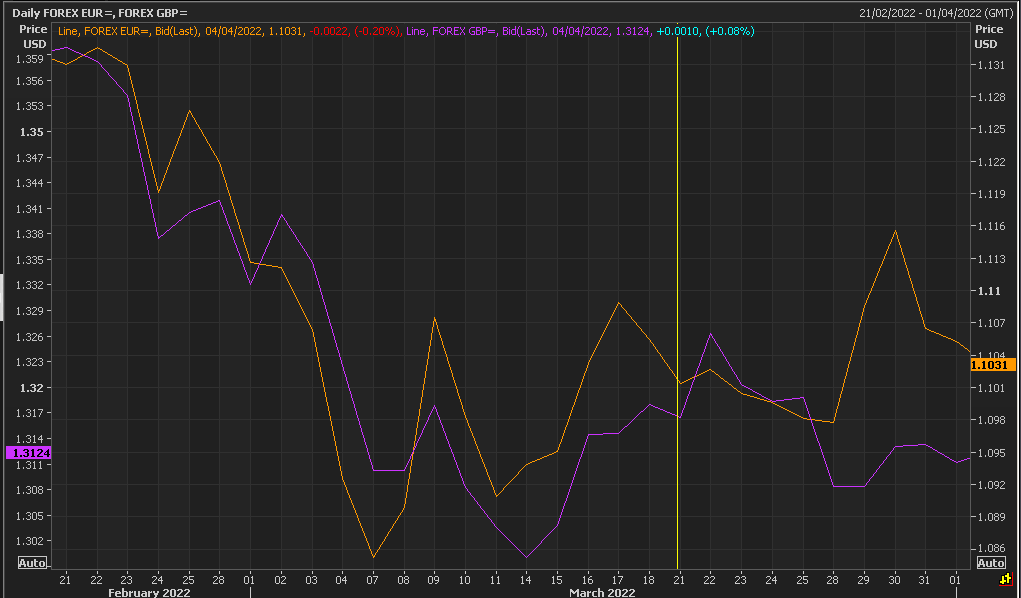 The Euro started the fortnight at 1.102 and saw relatively little movement over the week. It managed to lose some strength and moved to down 1.098 by the 28th March. Pulling it upwards were comments from the European central bank president about plans for reactionary measures to inflation, should the need arise. On the contrary, the greenback remains strong and puts downward pressure on the Euro as the war in Europe continues. GBP opened at 1.317, initially gained some value but dropped off over the coming days due to higher than expected inflation rates and hit a floor of 1.308. The Pound made modest gains and climbed back above 1.31 to close out at 1.312. The Euro had a bumpier ride in the latter week of the period. It rose sharply over a three-day period as hostilities continued between Russia and the rest of Europe, hitting a peak of 1.116 on the 30th. It did, however, give back some ground and settled at 1.104.

We hope you enjoyed this report, and see you in a fortnight! Till next time coffee folks! 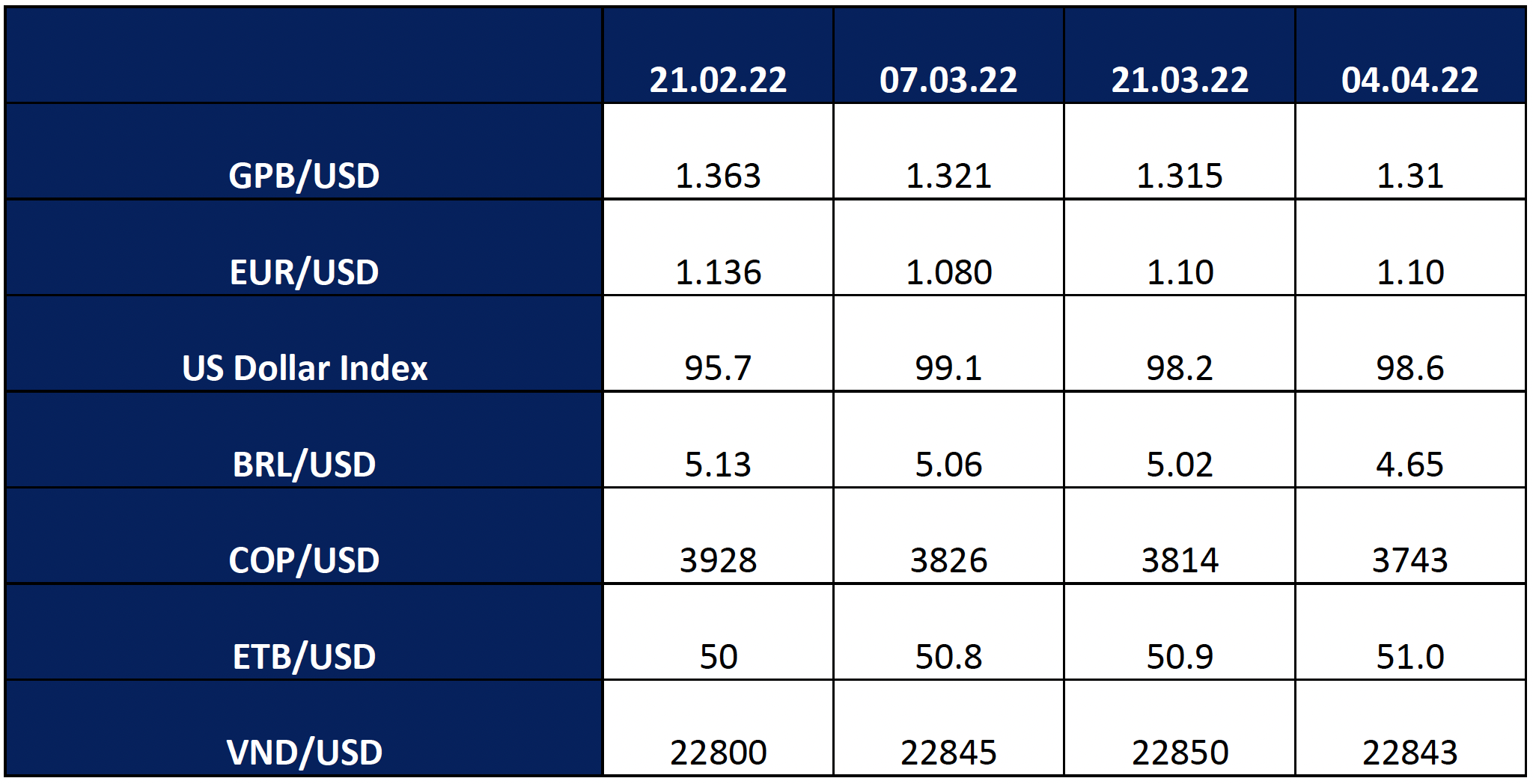