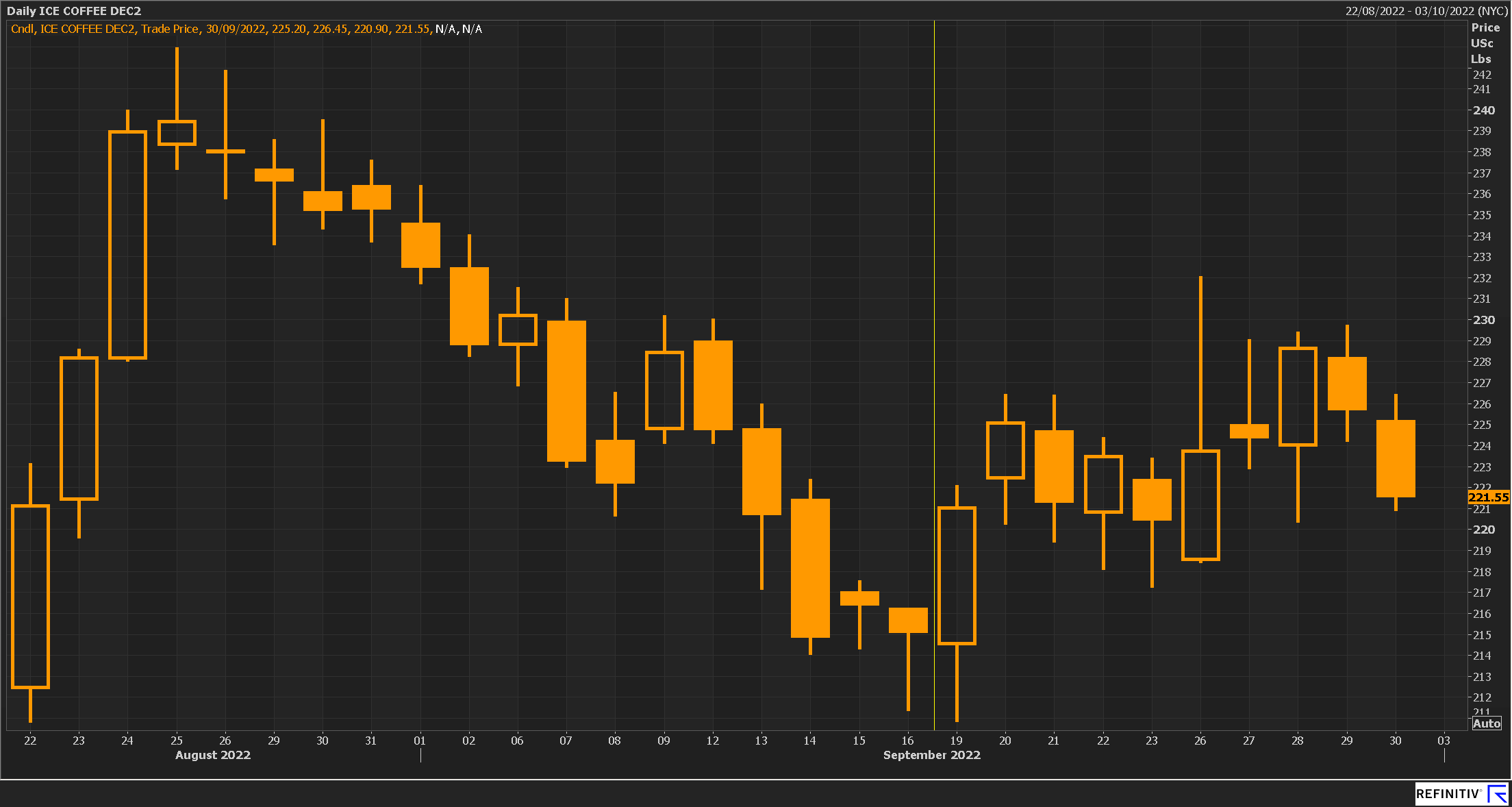 Monday 19th September opened at 214.50 c/lb, the lowest open of the fortnight, before hitting a high of 222.10 c/lb and a low of 210.85 c/lb, a huge trading day with a range of 11.25 c/lb, and closing at 221.10 c/lb, 6.60 c/lb above opening. The activity was pushed by short-term speculators, who were playing on both sides of the market, and buoyed up by the strength of the USD as it hit 20-year highs and the promising forecast of rains in Brazil. Tuesday 20th September saw a continuation of this bullish sentiment, encouraged by the news from CONAB that the 22/23 Brazilian crop will be up on this year, causing the market to hit the weekly high of 226.45 c/lb, before gently tapering down for the rest of the week, closing out at 220.45 c/lb.

Monday 26th September saw another exciting opening to the week with a highly volatile market day. The market opened at 218.50 c/lb, it only came down 0.10 c/lb below opening but went up 13.55 c/lb to hit the high point of this reporting period, 232.05 c/lb, figures like which we haven’t seen since early September. This volatility was driven by an aggressive short covering causing the market to rally to its high, but it could not sustain the level, with pessimism about the global economic situation, particularly coming from the UK and Europe after Chancellor Kwasi Kwarteng’s mini-budget was announced, pushing the high back down. The rest of the week was calmer in comparison, largely trading sideways between the 220 c/lb and 230 c/lb range. The final days of the period started trending downwards with Friday 30th September opening at 225.20 c/lb and closing the period at 221.55 c/lb.

The CFTC’s COT report with the cut-off Tuesday 20th September was relatively quiet. The commercials trimmed both their long and short positions. It was a similar story with the specs this week, shaving lots off both their short and long positions, leaving their Net long up 80 lots.

The CFTC’s COT report with the cut-off Tuesday 27th September saw the specs increase their Net Long position by 2,720 lots. Whereas the commercials continued on their trend of liquidation on both sides, reducing both their short and long positions by 5,847 lots to 65,725 and by 3,267 lots to 138,070 respectively.

Certified US Arabica stocks have decreased by almost 200,000 bags since the start of September, after they increased by roughly the same amount over August, and currently are sitting at 435,409. Whilst this seems like a lot of movement, even the high in August was still shockingly low relatively speaking. Until this year Certified US Arabica stocks had not come low enough to break below the 1,000,000 bag mark in the last 6 years. 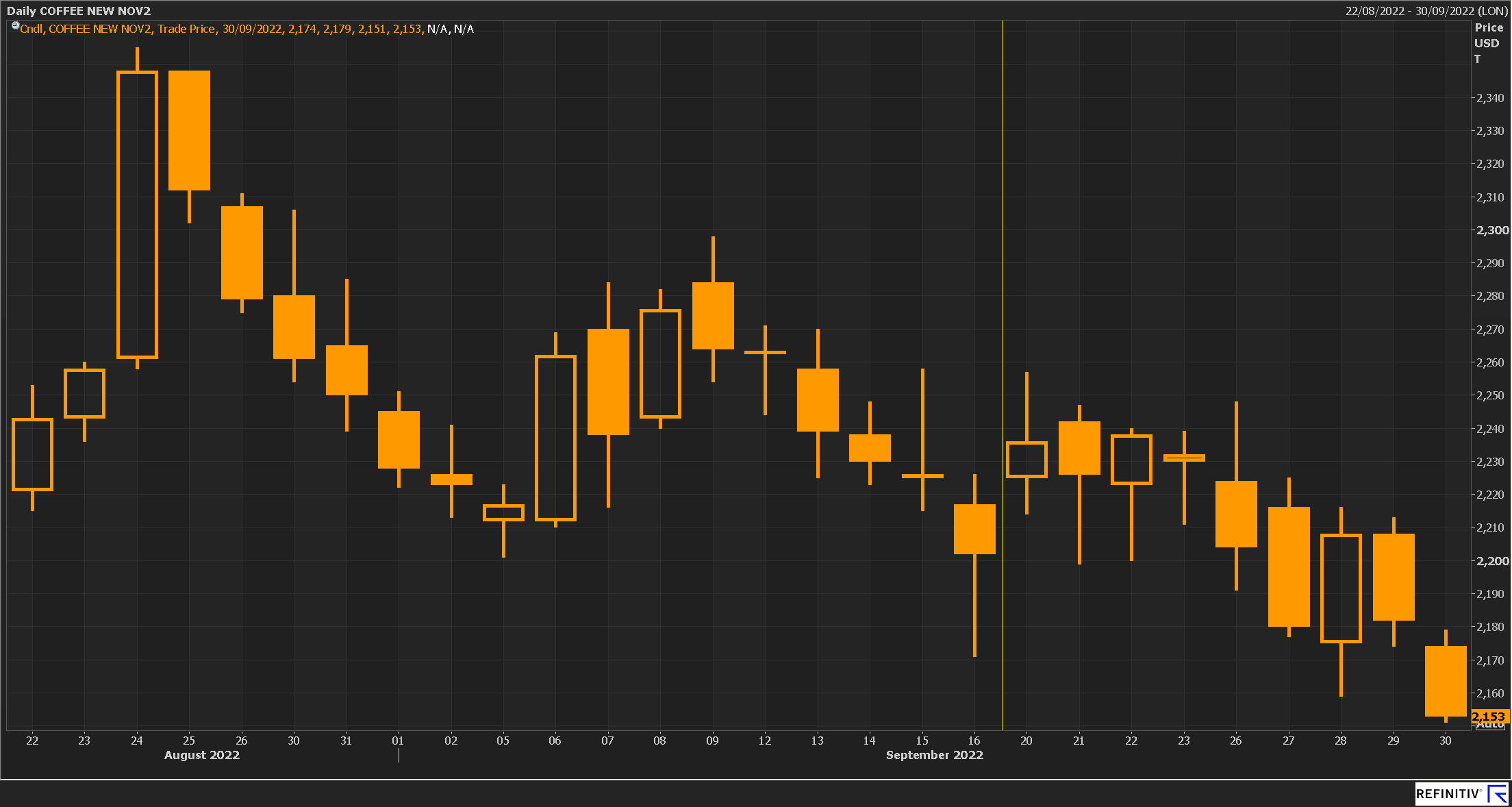 The London Robusta market was closed on Monday 19th September due to the Bank Holiday for the Queen’s Funeral. When it opened on Tuesday 20th September it was at 2,225 $/mt, hitting the high of the period at 2,257 $/mt, but coming down to close at 2,236 $/mt. The rally was driven by speculators, and did not have commercial backing, hence it was fairly short lived. Over the fortnight Robusta did not see the same volatility that Arabica did, and gradually trended downwards throughout the period. Friday 30th September saw the market low as it reacted to comments from the Fed, dropping to 2,151 $/mt and closing just above at 2,153 $/mt, 72 $/mt below the start of the period.

Brazil, like with most currencies, saw its Real depreciate against the USD throughout the week of 26 September. On 26th September itself, it fell from 1:5.26 to 1:5.40 as the NYC shot up. Weather in Brazil is currently looking good, with a strong outlook for the coming months. Rainfall is expected to be heavy and widespread across the coffee-growing regions throughout October, which is exactly what we want to be hearing! Heavy rain is precisely as the plants need at this stage in the crop cycle, and is contributing to the positive outlook for the next crop, good news after a year of low volumes from across the globe.

Vietnam has experienced some of the strongest storms in two decades this past week as Typhoon Noru hit the country. However, despite concerns, the storm did not reach the coffee growing areas, which tend to be on higher land and further away from the coast. Had they been, we would likely have seen the London Robusta Market moving in reaction as Vietnam is the biggest producer of Robusta in the world.

Honduras officially closed their exports for the year on Friday 30 September, meaning no more coffee from the 21/22 crop will be exported. The numbers for the year were, as expected, well below that of 20/21, with exports from the country in Sep-22 down a huge 30.7% on Sep-21. In total over the year Honduras exported 4.69m bags of coffee, 1.18m fewer bags than 20/21. This shortfall is the impact of difficult weather conditions and rust that Honduras has experienced over the last few years. However, the outlook of the 22/23 is more hopeful, with an expected small increase in volume. 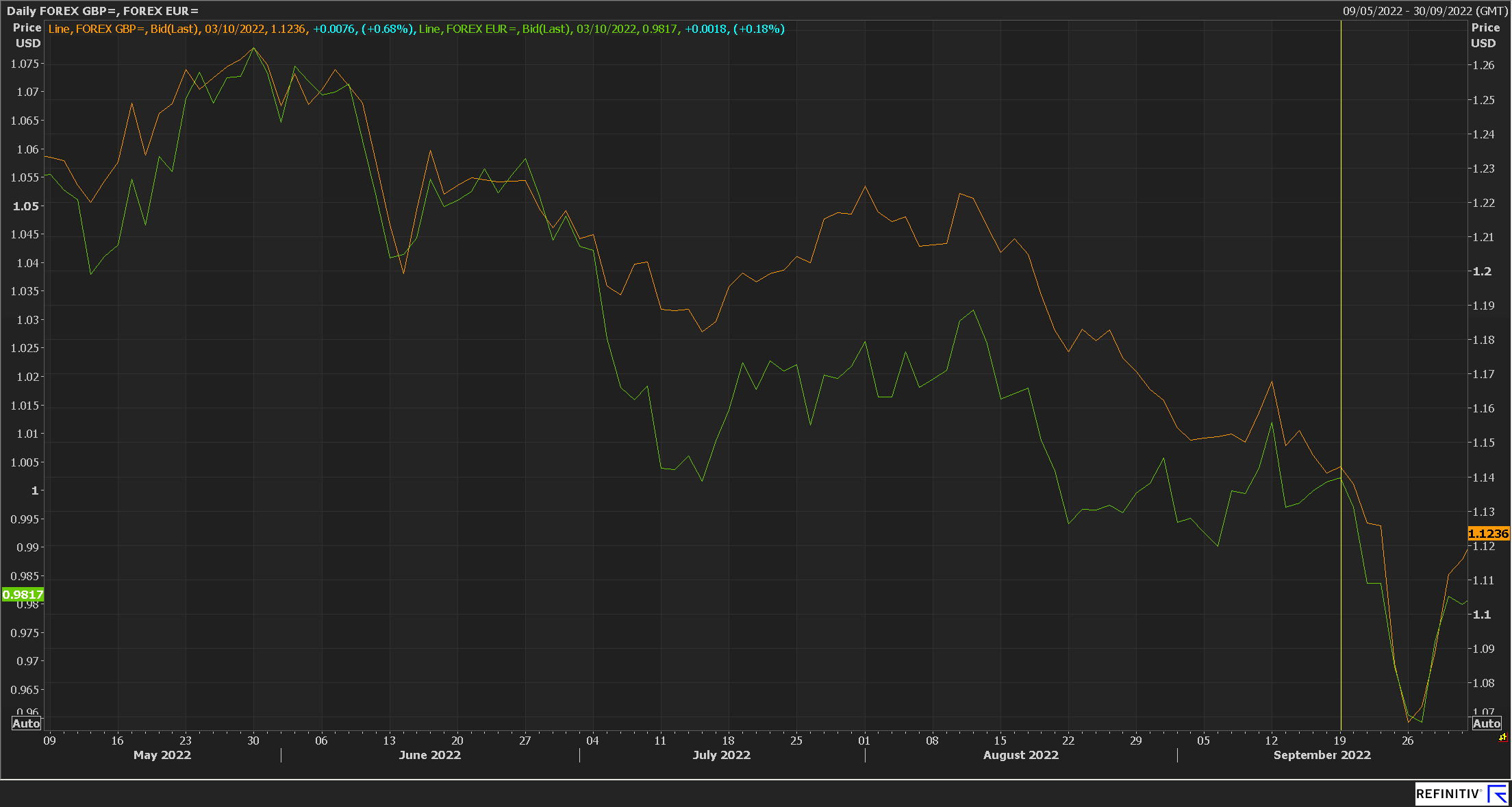 Over the last fortnight, macro news has certainly been choppy. The combined impact of Liz Truss and Kwasi Kwarteng seems to have turned the Cable into a rollercoaster, and we’ve just got to ride it. Opening the week with Sterling valued at 1.14 and already on a downward trend, it lurched downwards on 23 September to 1.08 in reaction to the mini budget Kwarteng announced, including that the increase in national insurance will be reversed and the richest will enjoy tax cuts with the abolition of the 45% tax bracket, the lowest rate since 1985. However, we hadn’t yet hit the worst of it, come Monday 26 September the exchange rate continued to break records, plummeting to 1.05. Thankfully, the BoE stepped in, turning the tide on the free fall, and cranking the rate back up to 1.12, a figure that would have shocked us a mere few weeks ago, but today we are thanking our lucky stars for. Kwarteng’s U-turn on slashing the 45% tax bracket has us cautiously hoping for some stability in Sterling.

Whilst Sterling was certainly losing value, so were most world currencies. Although Sterling was at the bottom of the pile, losing 20.7% of its value against USD. On the other side of the story, the US Dollar continued to break record highs, rather than record lows, with the DXY hitting an eyewatering 114.10 on 26 September, and remaining over 112 at the close of the week. The Fed remains hawkish in its approach, intending to keep interest rates high to temper inflation for some time, with no sign of them easing off, which will keep the Dollar at these lofty heights. 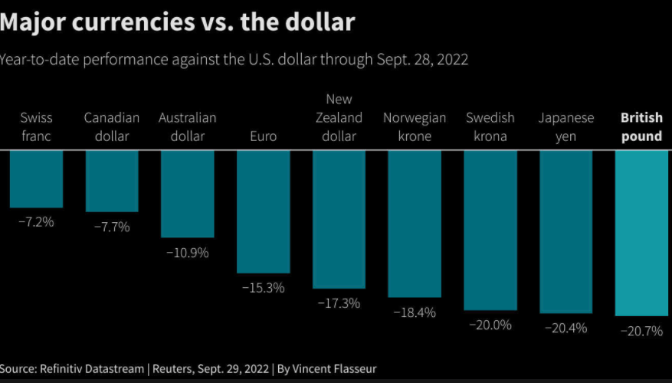