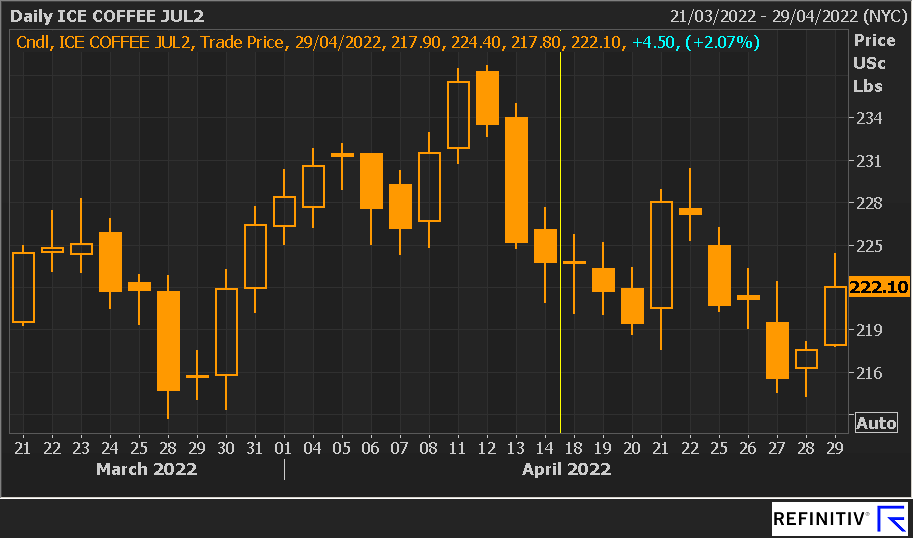 First Notice Day (FND) for the May terminal was Thursday 21st of April and all trade attention was focused on closing out their positions. The week opened at 223.75 c/lb and during the run-up to FND, the market continued its bearish trend from the end of the previous week; the May/July switch was flicking between contango and backwardation, and on FND the July terminal closed 7.6 c/lb higher than its open, finishing the day’s action at 228.10 c/lb. The following day was quiet in comparison and the week finished at 227.15 c/lb.

Monday 25th of April opened trading at 225 c/lb. Although it finished the day trading lower than it started, the drop was small when compared to other markets like European equities and Oil and Gold, which all saw a broad sell-off over fears surrounding the impacts of the lockdown in Beijing. Coffee roasters continued to test the bottom of recent trading ranges, and a big question many were asking was, “Is the floor 210 c/lb or 220 c/lb?”. The lowest close of the week was on Thursday 28th of April at 214.25 c/lb but there was a 4.2 c/lb rise on Friday which saw the week close at 222.10 c/lb.

The Non-Commercials reversed their trend of building out their Net Long Position to slash it by 7,523 lots in the CFTC’s COT report with the cut-off Tuesday 12th April.

However, we would not see such big swings in the following reporting period. As a result, the speculators’ position was left largely unchanged, with only 346 lots padding out their Net Long position, totalling 22,440 lots Net Long.

Circa 40,000 bags of coffee were added to the certified US Arabica position in April, and Brazil and Honduras continue to dominate the origin categories. There has been not much talk of Brazil Semi Washed for quite some time now. It will be interesting to see which origin picks up the baton. 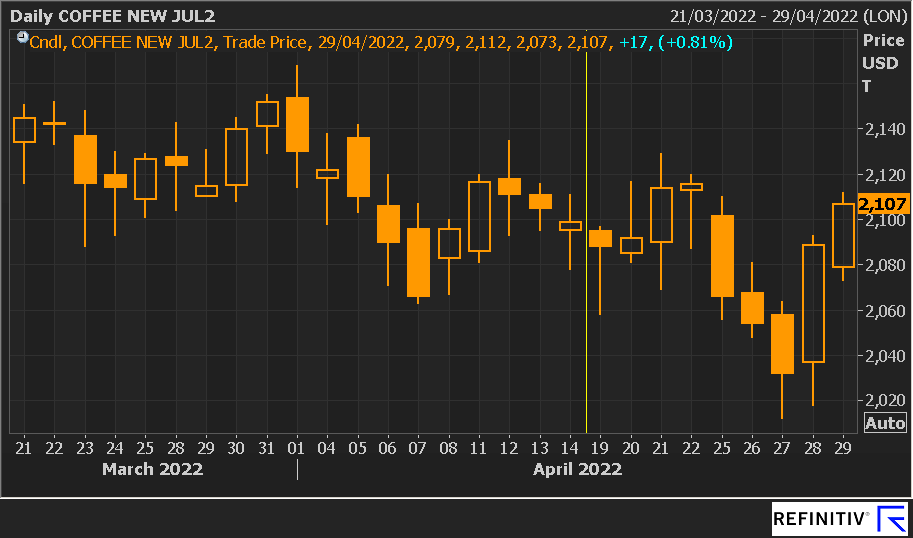 The Robusta market took a day off on Monday 18th as it was the Easter bank holiday in the UK. Tuesday 19th opened at 2,095 $/mt and, unlike Arabica, strengthened for the course of the week before sliding to a close of 2,066 $/mt on Friday 25th. The low of the fortnight was 2,032 on the 27th and after that low the market rebounded again to close out our reporting period at 2,107 $/mt, 12 $/mt higher than it started.

Since the end of 2021, the Brazilian Real has been appreciating against the US Dollar from 5.6 in November to 4.6 two weeks ago. However, as we have seen with many currency pairs, the recent strength of the US Dollar has changed the dynamic. The BRL is back up over 5, standing at 5.08 on Tuesday 3rd May. How good is the strength of the BRL against the US Dollar as a coffee market indicator these days? Not as strong as it used to be, but still a good indicator to pay attention to. It remains likely that with increased USD strength, we could see the bears circling; to what extent, however, will depend on the strength of the correlation.

As the Main crop in Kenya has largely wound up, the grades on offer at the latest coffee auction (20th April) were comprised mainly of under grades (UGs) and Mbunis. Prices were in line with the qualities on offer and since most of the coffee was of lower quality, the auction’s average price was lower than average.

Attention is now on the Fly crop harvest as people look to plan for Q3/Q4 2022 shipments. Heavy rains appeared in the middle of April, which is welcome news for the development of the Fly crop. The rain is expected to continue as we enter a traditionally long rainy period. While this is good for the Fly crop, it is slowing down port operations with delays coming out of Mombasa. The final auction of the season is on May 4th, and it won’t return till the end of June.

The Peruvian harvest began in lower altitude areas, and we expect some early shipments to kick off at the end of the month. There is already a shortage of Rainforest Certified coffee on offer, with many UTZ producers still in transition to Rainforest or unwilling to go through the hoops of another certification. UTZ roasters are now buying RFA coffee which means the demand has increased for RFA, but the supply has decreased; there has been a price adjustment of RFA coffee to reflect this. The new regulations on first buyer and the SD/SI premium mechanism are still unclear to many. RFA has launched some Webinars on their website that cover some key topic areas, which are worth watching. 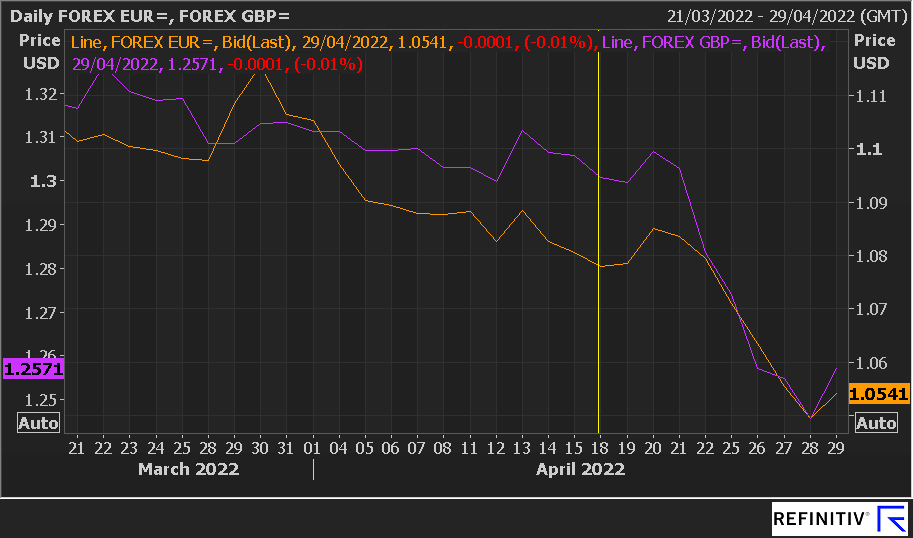 In this risk-off environment, the Dollar remains king. The DXY has continued to strengthen, and over the last fortnight has surpassed 103 with GDP/USD going from 1.3 to 1.25, and EUR/USD going from 1.10 to 1.05. Are we heading for Dollar/Euro parity? Jerome Powell mentioned that he was considering speeding up the rate hikes this year, and this caused a surge in demand for Dollars with a big downtrend that started on the 21st of April.

Could anything spoil the Dollar’s recent ascent? With record quantitative easing in the USA, some market participants have voiced concerns over holding US Dollar denominated assets, but the war in Ukraine has trumped these fears as the consensus is that Dollars are still a safe place, even if they are getting debased at a rate never seen before. You can read more here on where this move really began in earnest (the start of the pandemic); the M2 money supply in the USA has gotten quite out of control. However, tanks steal the headlines over graphs, and the longer the war rolls on, the more we are likely to see the Dollar strengthen, and coffee becomes more expensive as a result (all other things being equal).

We hope you enjoyed this report, and we’ll see you in two weeks! Till next time coffee folks! 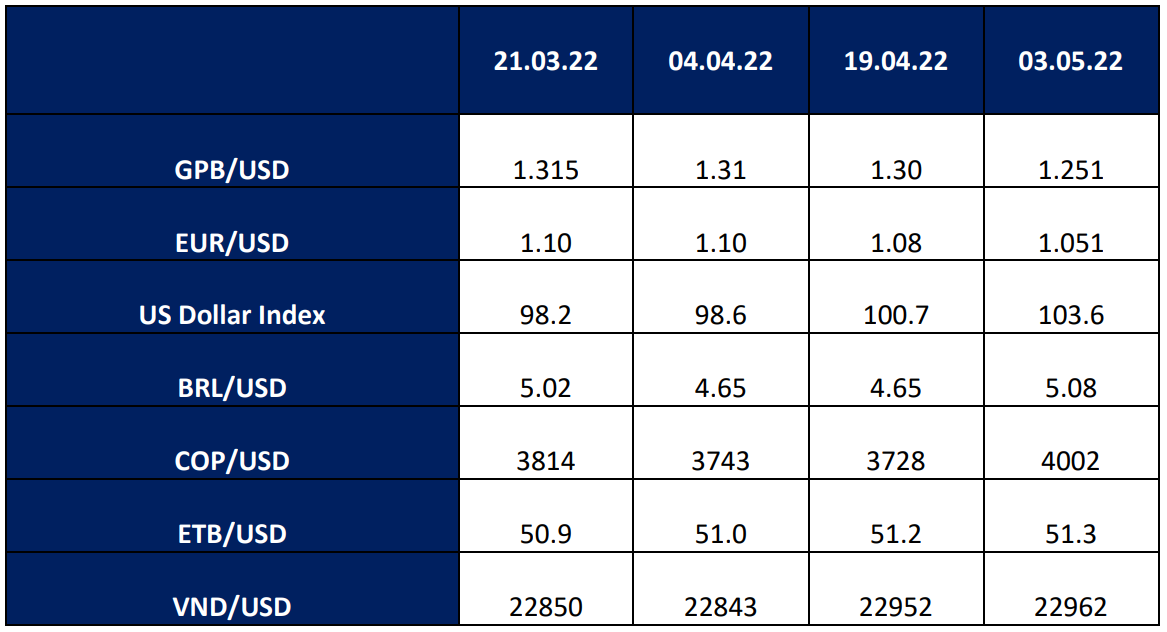