Good day. Welcome to the fortnightly DRWakefield Coffee Market Report for the period covering Monday 18th of October to Friday 29th of October. This report touches upon the Arabica and Robusta coffee futures market, currency pairings and news from origin. For clarity on any terminology used in the below coffee market report, see our Market Report Terms page. 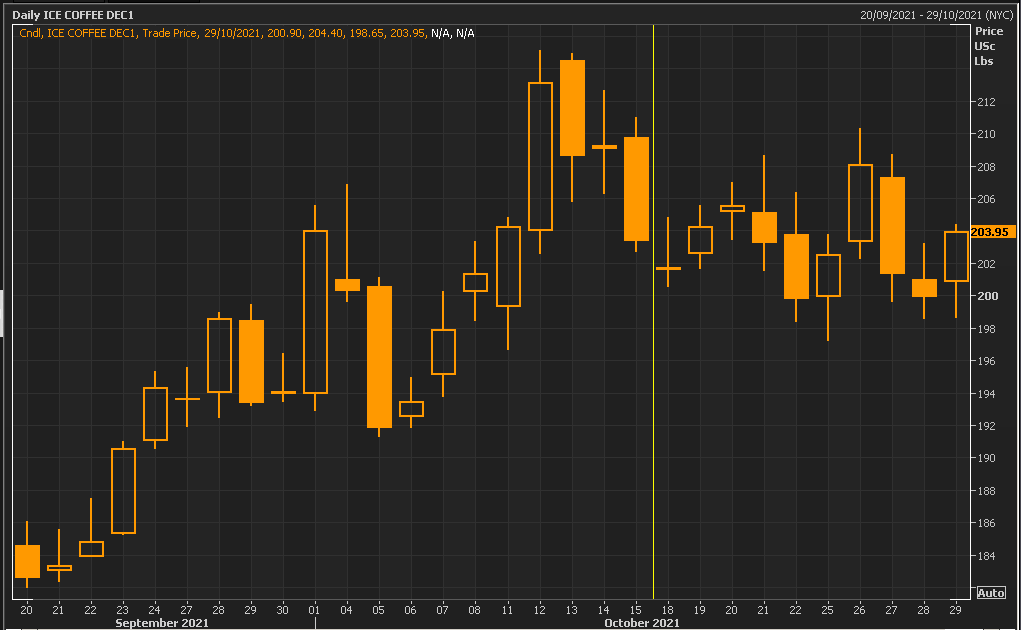 After losing considerable ground on Friday 15th of October, the NYC looked like it might make some ground back on Monday 18th reaching a high of 204.85 c/Ib, but proceeded to drop 3 ticks from its open of 201.75 c/Ib and closed out the session on 201.60 c/Ib. The market was under pressure from a strong Dollar and weak Brazilian Real and enjoyed a relatively stable couple of weeks compared to Robusta, touching just below 198 c/Ib and just above 210 c/Ib during trading hours. Long players exited their positions following the decline of the Robusta terminal on Wednesday 27th. The fortnight ended on 203.95 c/Ib, still above the significant 2 $ marker.

In the CFTC’s COT report with the cut-off Tuesday 19th of October, a reduction of the non-commercials long position ensued by roughly 2000, down to 56,786 lots. The commercials matched this and went long by nearly 2000 lots to take their total to -105,449 net short.

In the CFTC’s COT report with the cut-off Tuesday 26th of October, we saw a very static week for the non-commercials who only dropped their net long by 184 lots to equal 56,602. It was much the same for the commercials who extended their net short to -105,582. In comparison, the commercials in the Robusta market saw a large price movement and the approach of the FND moved shorter by nearly 8,000 lots.

Certified Arabica stocks continue to be drawn off, remaining at 1.89 million bags; a further 0.3 million bag decline from the last report. Still, the number rests higher than both the 2-year and 5-year average. It is a different story for Robusta stock levels, as further draw offs have reduced the number to 1.96 million bags which is considerably below the 10-year average. A continuation of high Arabica prices and high shipping costs from Asia to the west make Robusta that is already sat in onshore warehouses an attractive prospect. 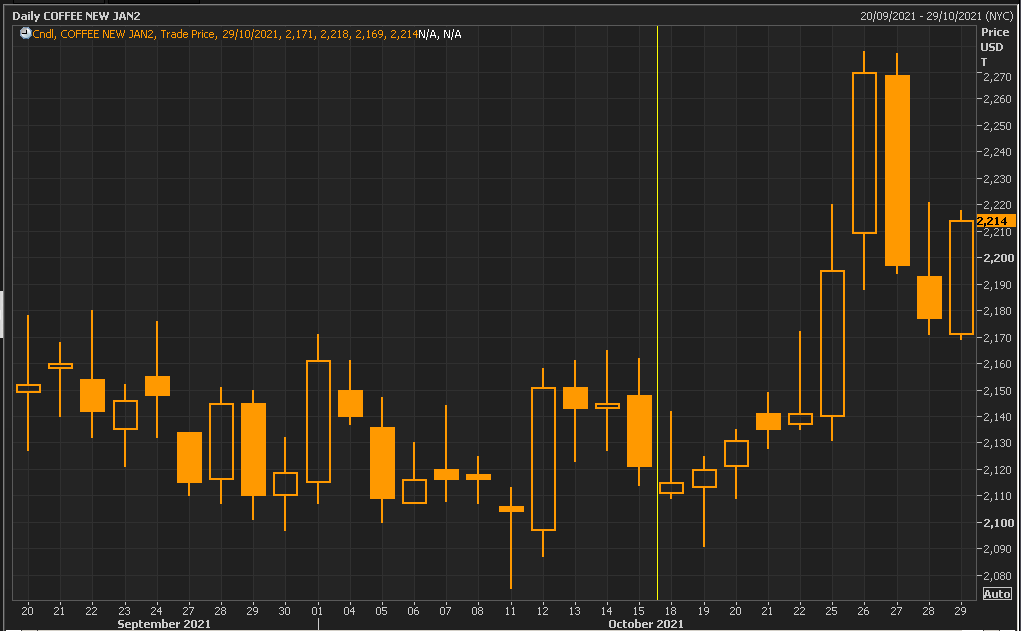 Like the NYC coffee market, Robusta saw a drop in value on the Friday proceeding but did gain some territory over the next three days from its open on Monday 18th October of 2,111 $/MT. However, it wasn’t until Monday 25th where significant momentum was felt due to the approach the November’s FND. In a two-day period the market climbed from 2140 $/MT to 2,270 $/MT, representing a 6% change. Closing at 2,270 $/MT, this is even higher than the peak of the Robusta market in February 2016 and represents a 10-year high. Once the traders had exited their November positions buying pressure was significantly reduced for the upcoming January-22 and March-22 terminals, and as such, the 27th lost 72 $ and closed on 2,197 $/MT. Friday 29th saw Robusta close out at a respectable 2,214 $/MT, far higher than values of the last 5 years. Global Robusta production is forecasted to hit 77.1 million bags in 2021-22, a 4.6 % increase of 2020-21 harvest. Vietnam will be responsible for nearly 30 million of these bags.

Brazil is still seeing the weakening of the Real due to economic growth slowing and the US Dollar rising in value. The Real is now almost 7% lower than at the beginning of 2021. To further add to this, political tensions are rising in Brazil as the Presidential elections are only one year away, indicating that the Real could fall further. Although some people are claiming the current President, Bolsonaro, should be charged with crimes against humanity for his woeful negligence towards the Covid-19 pandemic, it looks like he has no intention of giving up his position. The general rule is that the Brazilian Real and Arabica NYC prices have an inverse relationship, so could be this another indicator that coffee prices will continue to rise?

Costa Rica has begun its 2021-22 harvest, with the peak of the harvest predicted to be late December and January. Good rainfall before picking has meant that a decent bean size and cup quality are expected. Nevertheless, it is believed that overall there will be a 7% decrease in volume from last year. Some regions may see a 14% decline. In bag numbers this would be down from 1,378,000 60kg bags to 1,303,000 60 kg bags. Between 65-75% of the upcoming harvest has already been sold, meaning that if buyers wait too long, they could be left fighting for the remaining SHG or lower grades.

Honduran producers have been motivated by the recent price rises in the NYC to further invest in their farms, and so harvest estimates vary from 6 million 60 kg bags to 6.3 million kg bags. Some banks and IHCAFE are providing funds and fertilizers to producers and millers to assist their plantations and improve their wet and dry mills. Even though Honduras is little sold (most participants estimate 20%, when usually at this time of the year it’s 30-35%), internal differentials remain high due to producer concerns about the lasting effect of the 2020 hurricanes and upcoming presidential elections in November, which is likely to lead to unrest in the form of roadblocks in the major cities and ports. If prices and differentials remain strong, most people are considering a strong recovery in Honduras and most of the countries in Central America by the following 2022-23 crop. 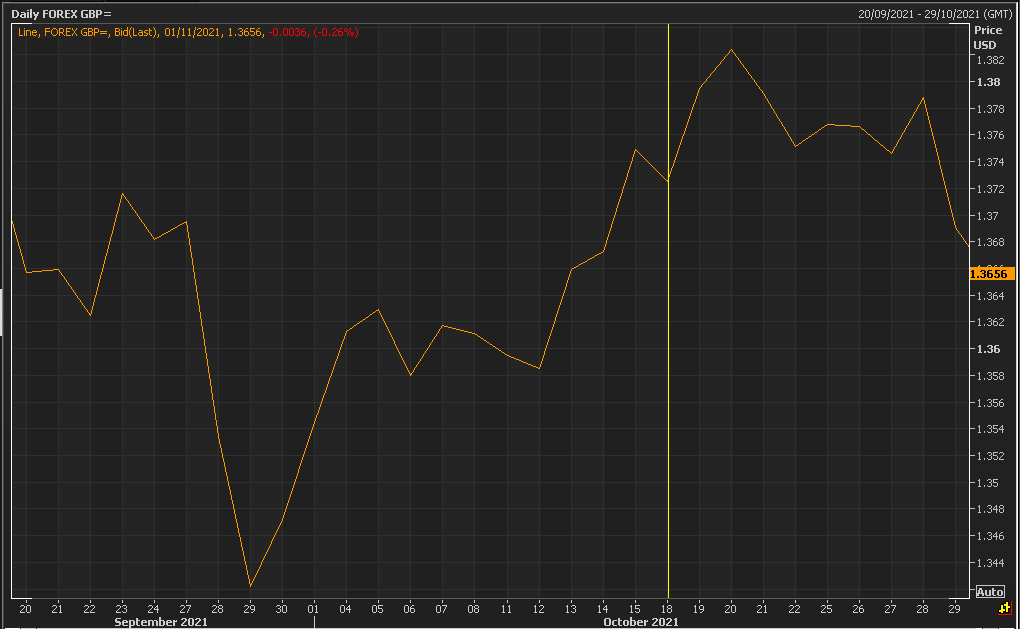 The Cable started the fortnight at 1.373 and rose to peak over the next two days at 1.382, despite lower-than-expected inflation figures. Talks persist around when the Bank of England will raise interest rates to try and curb this. Disappointing data releases concerning retail sales falling for the 5th month in a row caused the Pound to slip to 1.375 on the 22nd   of October. One theory is that the fuel crisis meant more people spent time queuing at petrol stations rather than in the shops. Wednesday 27th saw the Pound produce no notable reaction against the Dollar, but it did hit a 19–month high against the Euro. The Autumn Budget announced by Rishi Sunak did cause the Pound to devalue and drop to 1.368. 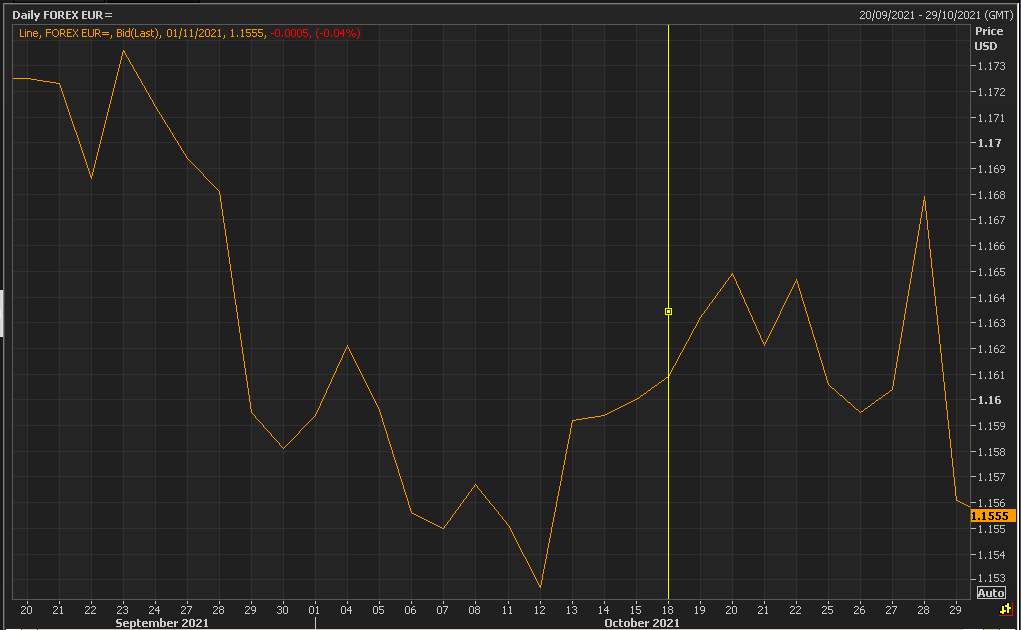 The Euro was on an upward track from the middle of the month and marked 1.161 on the 18th October. Greenback weakness allowed this upward motion to continue for the next couple of days. The October EU summit caused a slip in value of the Euro, and by the 26th it had fallen to just below 1.16. On the 27th the markets were expecting a continuation of the dovish approach by the European Central Bank and a spike ensued, tipping at 1.168. However, this wasn’t to last long, as the Euro dramatically lost value against the Dollar as it was revealed that Eurozone inflation is at a 13 year high. High energy costs, supply chain issues, and tax hikes led to October’s year-on-year inflation at 4.1%. On Friday 29th the value of the Euro had reduced 1.155.

We hope you enjoyed this report and see you in a couple of weeks for the next one. Till next time coffee folks!