Phil & Henry travel to… Myanmar: exploring a land of…

Sumatra Island; located in Indonesia, is known for its unique flavour profile, low acidity, thick body and spicy flavour. Sumatra employs a unique process for their coffee known as “Wet hulled” method or Gilling Basah in Indonesian – which gives the beans their distinctive dark blue / green colour. But first; a little history lesson. In the late 17th century, when Indonesia was under Dutch occupation, Arabica coffee trees were planted and then spread around Batavia (Jakarta) as well as in the South near Sukabumi and Bogor. Over time, coffee plantations spread to East Java, Central Java, West Java, Sumatra and Sulawesi. Today, a total of 7 million bags of coffee are exported from Indonesia where 25% of the volume is Arabica mainly coming from Sumatra Island and Aceh region (light green below) which represent 20% of Indonesian GDP.

During my trip, I was mainly focussed on Sumatra to explore our coffee suppliers located in Aceh and Northern Sumatera. They are the two main Arabica coffee regions as the southern part of the Island produces only Robusta.

I visited two main coffee areas where the coffee culture is completely different – In Northern Sumatera, coffee farms are intercropped with other cash crops such as cabbage and potatoes etc. The pickers I noticed were very careful only to harvest the ripest cherries, and it was good to see a number of plantations extremely well managed. There is currently a big incentive in place from our supplier Sari Makmur to improve the quality of the green beans.  In 2005, they established their own estate called “Wahana” located in Lae Mungkur village, Sidikalang sub-district, Dairi district, North Sumatra. The estate is between 1,200-1,500 metres above sea level and has 468 ha of farm land of which 250 ha is covered by coffee. It is RFA certified and they employ more than 500 people overall.  By the time we arrived at Wahana, there was a tropical storm raging. It didn’t stop us visiting the different plots of the farm, but seeing all the pickers sheltering under canvas from the rain makes one see how short the picking day can be at this time of year! The farm is managed by Dianto who is the brother of Andry Ceo of Sari Makmur. He is an agronomist and makes the farm really diverse with one plot of Rasuna varietal and another one with Toraja, USA Caturra…. Etc. 60% of the varietal is Rasuna and 40% Toraja. In addition to their own farm, they built their own wet mill at where they receive cherries from neighbouring farmers to get control of the coffee at the point when the cherry is delivered. They can sort floaters and then by adjusting the water pressure on the eco mill, pulp only the ripest cherries, and then by water density of the parchment beans. They are mainly processing fully washed and wet hulled. Just next door to their wet mill they have a huge patio under a canopy (to protect it from the rain) covered in coffee at various stage of the processing, parchment at different moisture levels and also green beans. The farm also produces specialty coffee using different types of processes – especially naturals.  Their natural process is quite spectacular as they dry the ripest cherries for a day on patio, then dry on the mechanical dryers for 8 days at 50 degrees. The coffee makes a noise that is reminiscent of waves breaking on the beach and then retracting back into the sea. The resulting processed berry looks akin to a Malteser and taste like a creamy strawberry maoam J.  Before leaving the Toba region, we stopped at one of the farm just facing the lake in the Tigapane village Tigarugu area called Toba blue where it is mainly Rasuna coffee trees that have been planted. This farm is one the most beautiful locations for cherries that I have ever seen. Due to the drought in Indonesia this year, production volumes have reduced by around 40% – this resulting smaller crop has meant the harvest has proceeded quicker than normal and over is 80% is complete. The next day, we were aiming to reach Takengon, the main city of the Aceh, a coffee area producing 60% of the Arabica from the island – nothing is guaranteed when travelling in origin, but we landed successfully, and met our first farmer in Jagong village where there is a collector from Gayo Megah Berseri cooperative processing cherries.  A collector is the person who will receive the coffee cherries or parchment (depending on the process done by the farmer). He pays the farmer on each delivery and then sell it to the cooperative. Nowadays, more collectors have a community wet mill which allows a better quality control at the point of the cherries is delivered. In the same area we met one farmer Mr Maman who has been producing coffee since the late 80’s. He braved the civil war in Aceh and continued to produce coffee, whilst many farmers from the region moved to the island of Java during the conflict. After the Tsunami in 2004 that devastated Band Aceh and killed more than 160,000 inhabitants, the civil war came to an end.

Today, Aceh is a safe region where the predominant religion is Islam regulated by sharia law, with coffee the main driver for the economy. The majority of the farmers in this area are part of cooperatives growing coffee Fairtrade and organically certified. In this area 24 cooperatives are Fairtrade certified out of 27 in total in Indonesia – Fairtrade and organic farmers received premiums at the time of delivery to the collector and also use the FT premium within the community where 25% of it needs to be used for quality concerns. Coffee coming from this region is known as Mandheling even though originally, the name comes from a city located in Middle East Sumatra, Mandheling Nata. It is where the first Arabica grew on the island under the Dutch colony. It became famous when the Japanese promoted it back to Japan after they spent their internment in Sumatra during the Second World War.  In Aceh, we could see that all the farmers are managing their farms with care and attention, as it is their main cash crop. We explore another district called Bener  Meriah where family farmers from Permata Gayo welcomed us with Munalo and Saman Heritage Gayo dances

The Indonesia Government Institute has one location in Aceh called Research Gayo coffee centre Bando Ganesh Founded in 1988 – Dutch and Indonesians set up the centre as a seed stock and to assist producers by selling trees for 3,000 rupia each. (Approximately 15p each) They also provide technical assistant to producers. Every single farm is  planted with Mixed varietals per Ha – here below are the main ones from Aceh: Gayo 1 ( timtim ) around 1,100-1,250 masl,  gayo 2 (bor bor) (means high yield in gayo language)  planted at 1400 masl  P88 from Thailand (ateng) Gayo 1250 -1400 masl  1 and Gayo 2 are cross hybrid between Catimor and Arabica.  On average a farmer has 1.5 ha of plantation which contains  1,500 coffee trees and produces  700kg of green coffee (exports)

Permata Gayo cooperative also created a new cooperative named Kokowagayo mainly founded of women where coffee has been certified Café Femenino since 2016. Women were not really represented at the coffee board; and this is the reason why they decided to have their own cooperative to make their own decisions and projects for their own benefits. One project concluded since the Femenino certification, is a kinder garten  which allow women  to work on the farm and take care of the coffees (Wonosari) with meeting rooms for female  farmers etc… Gender equity is not only one of the issues to deal with but also climate change. Many farmers are reallocated their farm to higher altitudes as they have to face with longer drying season provoking more diseases such as broca but also roya. The government institute is working on fertiliser spray that could help farmers for the next season. 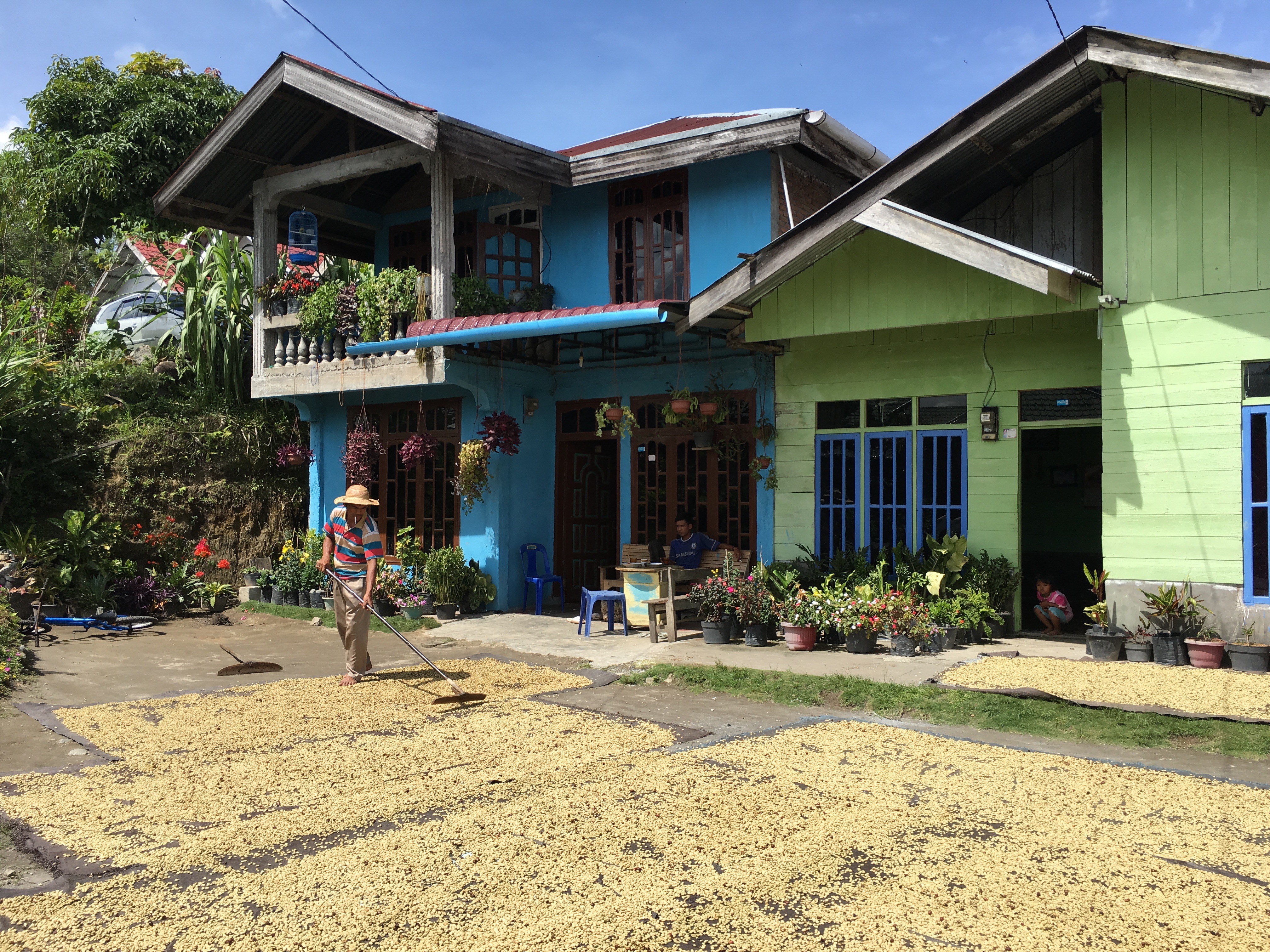 One of the cooperatives I visited called  Kopera Arisnanari is really aware of that and give intense training to their members and add value to their coffee by processing it fully washed, honey, natural etc…   One of the last farms we went to in Kala tenang village was Bener meriah where there is a concentration of small holder farming an estate of 100% organic coffee trees. The main varietals were Caturra – producing cherries just two years after planting the polybag against 3 years for Timtim. The tree are pruned in a very specific way, unique to Sumatra known as “abigondas” or again in dialect from kala Taneng called “Monkey Ass” (yep we really just wrote that) – They prune all branches so that it creates a naked top of the canopy in an oval shape. The purpose of this is to leave space for light to reach the ground. It can then heat the soil and avoid too much moisture and create Roya…

In Aceh, there is a strong culture of coffee but the internal market is really complex with many parties in the supply chain ( Incl. Collectors) and can also be quite volatile due to internal competitive price  Producers have been playing a more active role in collaboration with the collectors, to ensure improvements and checks in quality control are maintained.

As most of you might know, Sumatra has a particular way of processing the coffee called Galling Basah – Farmers deliver the Gabah which is wet parchment coffee with around a 45% moisture content. The Gabah is dried immediately (on large, clean and impressive covered patios) for around a day prior to hulling. After hulling the “Labu” wet green bean at 30-40% moisture takes a further 2 days to become “Assalan” which has a 20% moisture content. Then the Assalan is transported to the main Dry mill where it will be further dry for ½ days to 13% and totally unsorted green bean to be ready for export

This year Sumatra is facing issues due to the weather and this means their crop will be lower. But we can feel the effort from the farmers to get better quality and keep up good productivity. There is a high risk for this Arabica in Sumatra as large coffee players are in the market. Therefore, the internal market is really speculative and hard to predict, as farmers are not 100% committed to the cooperative but will deliver to the collector (bank) who will pay more. They are revising and thinking on changing their process. On the positive side, they want to collect and control the cherries to guarantee a better quality. But in addition, new processes such as fully washed and natural might give great coffee but may lose some of the characteristic of Sumatra……