Café Granja La Esperanza is world renowned and in our opinion, one of the very best speciality farmers/exporters in the world.

Rigoberto’s (owner) interest in coffee production and processing has pioneered the way which people perceive coffee in Colombia. We could argue that this all started kick started when Rigo’ had to chance to manage a farm in Boquete (Panama), which resulted in him winning the Best of Panama. Following his success he brought back Geisha seeds to Colombia and the rest is history.

Before heading to Granja’s farms, we spent the first day visiting two groups that we have been sourcing for the last few years, La Cristalina and Belen de Umbria. We were able to have discuss their structure, thoughts on the previous crop and plans for the future. It was great to see that each farmer has benefited from the groups success and they continually produce great value coffee which scores  84+.

After having an insight in the group’s structure. I was fortunate to visit four out of the five farms Granja own –  Las Margaritas, Cerro Azul, La Esperanza, Potosi; It was great to see the different varietals and the unique way they process on each farm.

Las Margaritas, can only be describe as a coffee traders example of a sweet shop, it was  a coffee garden with small lots of Geisha, Red and Yellow Bourbon, Pacamaras, Sudan Rume  and Laurinas. Each picker is carefully trained for picking and processing to ensure that their export quality remains at a high level.

It was a fantastic experience to see the coffees in the farm and later cup them in their lab in Caicedona – a very memorable experience.

My week in Colombia comprised of visits to Cencoic, Racafe & Selecto. Cencoic is a cooperative and exporter that represents indigenous groups of small holders in the Cauca region. Racafe is an exporter that we work with on a few different coffees, mainly:  conventional excelsos, regional coffees such as Suarez and Inza, and also single estates such as El placer and Las Acacias. I also spent a day with Selecto, a new exporter we are working with who have access to some brilliant organic coffees which will be arriving to the UK early 2017.

Cencoic, which stands for Central Cooperativa Indígena del Cauca, is a group that we have been working with since 2007/8. They are a cooperative comprised of indigenous reserves in the Cauca region and they also export their coffee. Traditionally we have sold their coffee to other markets and this year is the first year that we have brought their coffee to the UK. It landed last week in fact! We’re excited to introduce you to this amazing cooperative.

The Cauca region used to be very different because of the armed conflict there and due to all the hard work of the Colombian people & government, the area is now much more stable and the process towards peace is allowing cencoic to flourish. They have seen steady growth in the last 5 years and more and more families from their existing reserves are producing the right quality and they are also working with new reserves which they previously did not have access to because of the dangers associated with those areas. The average farmer in the cooperative has between 0.8 to 1 hectare and an average altitude of around 1800 masl. Common varieties include: Caturra, Colombia, Tabi and to a lesser degree, Castillo. Tabi is one of the newer varietals on the scene. The producers I spoke with liked Caturra the best. 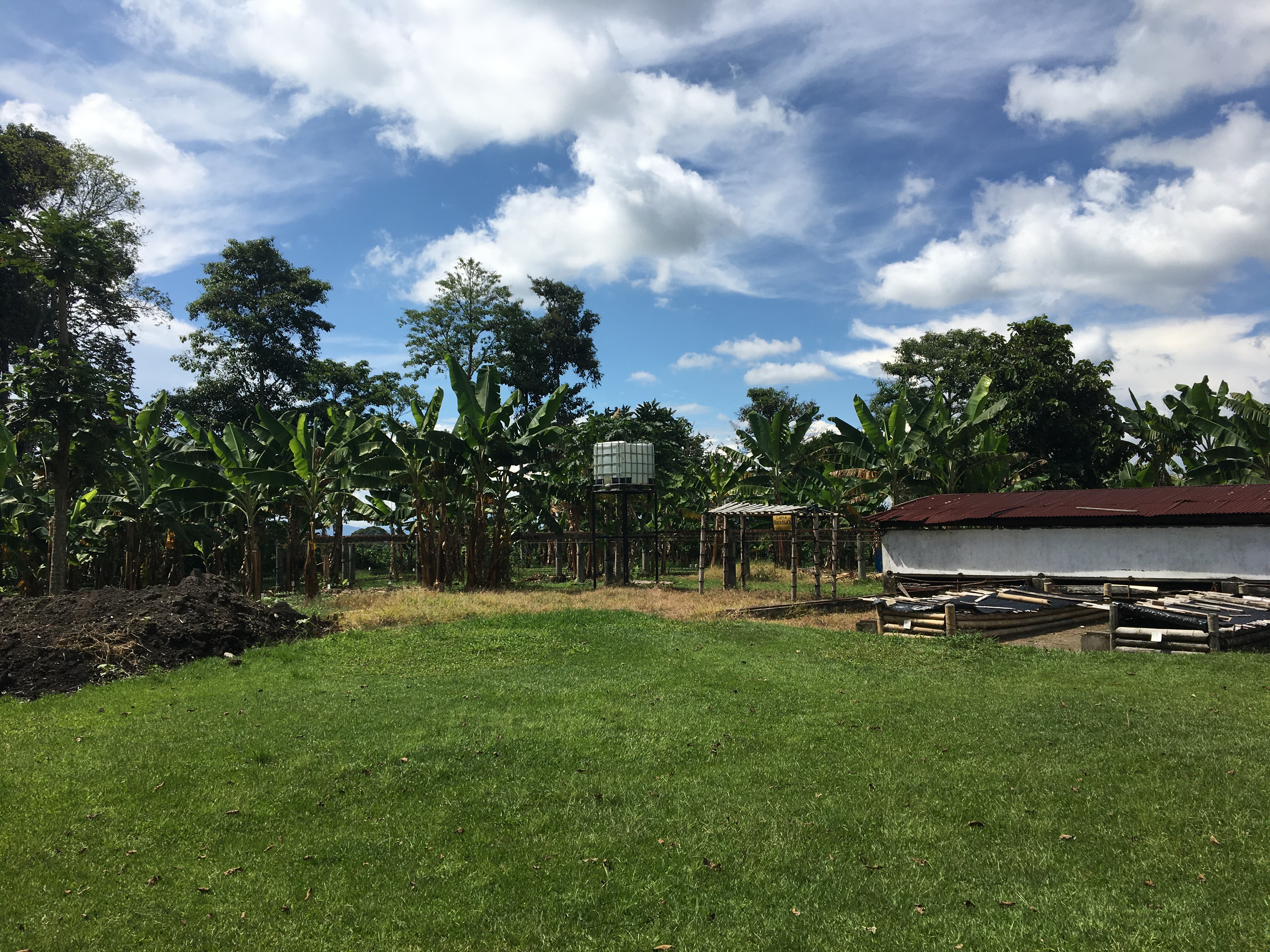 Cencoic export high quality coffee with a lot of character and each reserve has its own unique terroir that makes itself present in the cup. In the Valle del Cauca region and Cauca region they grow a lot of sugar and it’s safe to say the coffees exhibit a similar sort of sweetness! In Colombia they make a particular type of sugar called ‘panela’ which is treacle like and commonly found in these coffees.

What I found extremely interesting about the culture present on the reserves is that they each have a completely different system of government. They have leaders called Cabildos which govern a reserve and dictate the law and order there. Each Cabildo and reserve has slightly different rules and a way of living. The great thing about Cencoic is that they work with the Cabildos and take into account the direction they would like to take the reserve and the coffee therein. I had the pleasure of visiting the Tacueyo reserve which is the largest reserve in the Cencoic portfolio.

Click here to find out more about the coffee

Coffee across all the reserves is depulped, fermented & dried at the farm. The farmers deliver their parchment to the local collection warehouse where it is weighed and recorded and it then makes its way to the warehouse in Popayan to be cupped and then dry milled for export at a mill in Popayan before it goes on a truck to the port of Buenaventura. Cencoic’a HQ is in Popayan, aka ‘La ciudad Blanca’ which means the white city. It’s called that because in the central part of the city all of the walls are white and it has been preserved that way since it was built by the Spanish many centuries ago.

I am working with cencoic to produce in depth information sheets on each reserve we work with plus an overview of cencoic and it’s rich history. It’s a story of struggle, determination and defiance. I will share this with you when I have the full story from Cencoic. It will further explain the system of governance across the indigenous reserves. All the coffee they produce is washed and we offer coffee per indigenous reserve and also conventional Fair trade excelso.

I spent a day cupping some great coffees with the exporter Selecto and was impressed by their dry mill. They have a cold machine that removes the parchment from the beans in a way that preserves the coffee better as often the heat and friction of older machines can damage the embryo of the coffee bean which affects how long the coffee has to till the cup starts to age.

Demand for organic coffee across the UK is growing at a steady pace and we hope to satisfy this demand with grow with the new cooperatives we have started to work with out there. Selecto has won the award for best organic coffee in the US 3 times in the last decade and as a result the organic coffee producers they work with in Planadas, Tolima are gaining international notoriety.

Selecto is also a family business with two families from the Eje Cafetero (traditional coffee producing region in Colombia ) owning 90% of the business and another family owning the other 10%. It’s nice to work with other family businesses! They’re exporting and milling knowledge adds a lot of values to the coffees and it’s no surprise people have noticed their hard work.

Talking of families, Racafe is also a family business, albeit a much larger one than DRW or Selecto. We have been working with them for many years now and this trip i visited their dry mills in Armenia & Bogota and El Placer farm & La Albania Farm. Racafe is a very efficient outfit and has been honing the art of exporting coffee for many decades now. Their team is vastly experienced and it was a pleasure to see how they work and learn off them. The manager of the dry mill in Armenia, Israel, also owns a farm called La Albania which is about 30 minute drive away from the mill. He’s been managing the mill for over a decade and he sure knows his coffee! His beautiful farm produces some top notch coffee and we hope to be bringing some over to the Uk in early 2017. Fun fact, he’s also a collector of Turkeys and currently has 32 roaming the farm! I also visited El Placer farm. It’s a large farm of 243 hectares, of which 218 are devoted to coffee. Main varieties are Caturra, Colombia and Castillo. You may have already noticed, Caturra is a very popular variety out in Colombia! Olga Ines Velasquez owns the farm and is passionate about sustainability, ensuring that everything they do at the farm takes the environment into account. The farm was a great deal smaller when she bought it many years ago and she has been slowly adding neighbouring plots to the farm.

Each exporter or cooperative I visited has something unique. Colombian coffee in general offers an array of riches in both terroir and processing and it’s not just the top microlots that are worth checking out, the regionals and conventional excelsos offer great value given the cup they can produce. Definitely a must have origin in your offering! If you have any questions, don’t hesitate to get in touch!