From Karnataka to the bottom of Kerala – India January 2018

India is an origin we visit every other year. This time, myself (Mantvydas) and Simon were the lucky ones to jump on a plane and get 10 days of winter sun.

We started our trip in Bengaluru (once known as Bangalore) visiting the office of Allansons, for a general trade discussion before setting off to their curing works (dry mill) in Hassan where both Arabica and Robusta are processed. The mill has all the usual machinery including screen-sizing, gravity tables, de-stoners, metal detectors, electronic eyes and dust removers. They also have around 100 women hand-sorting some beans into special lots. We noticed that the cleanliness was exceptional.

We had a cupping session with the Q-Grader Mr. Nagaraj, who runs the quality department at Allansons, the table had a selection of single estate coffees, commercial grades and different Robusta processes. We particularly enjoyed the Gulehind Estate Arabica, an Estate which we were due to visit the next day or so.

The following day we drove to Sethuraman Estate in the Chickmangalur area who we have been buying coffee from for the last 10 years. This beautiful Estate has been in Mr Nishant’s family for six generations and owned by Mr Nishant for the last 20 years. Their logo has a peacock on it because peacocks walk around the Estate. They predominately grow Robusta, with beetle-nuts and pepper as secondary crops. They have reduced their water usage from 4000ml to 800ml for processing 1kg of cherries, which was achieved by implementing new processing facilities and a new water recycling unit. 65% of production is processed as washed (known as parchment), 30% as Natural (known as cherry), and 5% is dedicated for the “Special treatment Mandarin” (which is pulped sun-dried).

After spending the morning walking around the Estate and learning more about the horticultural processes at the farm, which lean towards organic, we had a cupping session of their first round of picking. We believe it is one of the top Robustas in India with a rich body, low in acidity, and very clean. With flavours of chocolate, clove, and a touch of nuttiness, Peaberry and Mandarin standing  out.

The following day, Mr. Manjounat, the head of certification at Allansons, took us to Gulehind Estate in Chickmangalur which is located at 1040masl. It is a beautiful second-generation farm owned by Mr. Syed Mahtab which grows 100% arabica, mainly the SL795 varietal. The whole estate is well maintained, the coffee trees looked very healthy under the shade of silver oaks which are also used as support trees for pepper, another important crop for the farm.

There was a pond for irrigation, their own nursery, and most importantly a pulping machine, so they can wet mill coffee the same day as harvesting it. We then headed to an area very close to the Bababudangiri Hills where we visited another Arabica estate called Kalledavarapura, located at around 1100 masl with 100 acres. It is a fifth-generation estate, which is now being run by Mr. D.M. Shankar and Mr. D.M. Purnesh. The estate is divided into 20 blocks of five acres each, most of the plants are SL795, less than 10% are SL9 and just 2% are the Chardargiri varietal.

Kalledevarapura has found an innovative way to deal with the stem borer beetle, instead of removing the whole tree and burning it, they fully wrap the trunk with an impregnated plastic to kill the beetle inside, so the tree has a chance to live. It is early days of this experiment but it is worth trying. The estate has a well developed pulping and washing unit and a lot of space on patios to dry parchment or cherries, they also have three lines of raised beds of about 1000kg dying capacity, each bed is fitted with a fan for pre-drying, which saves them around 1.5 days of drying. Another day, two more estates. First, Archurly owned by Mr. Munir, who is a 4th generation farmer. The estate is 150 acres with 100 acres of Arabica and 50 acres of Robusta. The Robusta was planted as a ring barrier against stem borer. There are many trees for shade, so there is no mechanical harvesting involved. Last year’s Robusta production was split over two processes of around 60% pulped coffee and 40% of natural, they also produced 90% pulped Arabica and 10% natural Arabica. There is an intention to certify the estate as Rain Forest Alliance in the next two years. Due to very flat land the estate is an ideal place for paddy fields, they use this paddy wheat to feed their animals which they keep at the estate.

In the afternoon we visited the Harley Estate, owned by the same family as Kallevaderapura, and established in 1864. The geographical location and altitude of the farm is better for Robusta so it has around 400 acres of Robusta and only 150 acres of Arabica. Arabica is grown where the farm peaks around 1000 masl, while Robusta is around 900 masl. They have a slogan “treat coffee like food – it is food” and I believe they do; whole processing units are cleaned out after every pulping session, drying patios too. When we walked around the coffee trees, each one looked like it had been well maintained, most of the cherries were the same dark red colour and the amount of cherries per tree were more than we saw in other farms in our trip. The whole farm has an irrigation system and the lake which holds mountain water to use if they need it, it also helps generate some Hydro Electric Power for farm use. Before heading to Kerela State we spent our final night in their “home- stay” in the middle of the estate. It was newly built and had all modern amenities (even a massive tree growing right inside the shower room!), they do not have WIFI solely to escape modern life. They serve only local, traditional food, unless of course you have an allergy. We are planning to visit next year and experience the harvest in greater detail.

We then headed to Fairtrade cooperatives in Kerala State, due South west.

The first two farms we visited had many things in common including having Organic status, a size of 1-3 acres and most interestingly the co-op farmers are on the verge on being completely self-sufficient. The diversity of products was amazing, they grow coffee, rubber, banana, ginger, chili, beetle nuts, coconut, pepper, rice paddy, cardamom, cloves, passion fruit, beans, jack-fruit, cocoa, cows (and bio-gas), chickens, to name but a few. They have not given their farms a name because they are extremely small family plots.

Wayanad/Biowin has about 14,000 members and they were established in 1990.

We met at the processing facility with Father John (General Manager) and Vinesh (Export Manager) where we saw not just a coffee dry mill, but a pepper mill, herbs and spice preparation and a freeze-drier for fruits, it was truly inspirational.

We then visited three farms in the local vicinity, one of which was having their monthly meeting. It was interesting to hear that Fairtrade has helped them get a better price for coffee than the local market but it is still not quite enough to be reliant on coffee. Hence the diversity of crops. 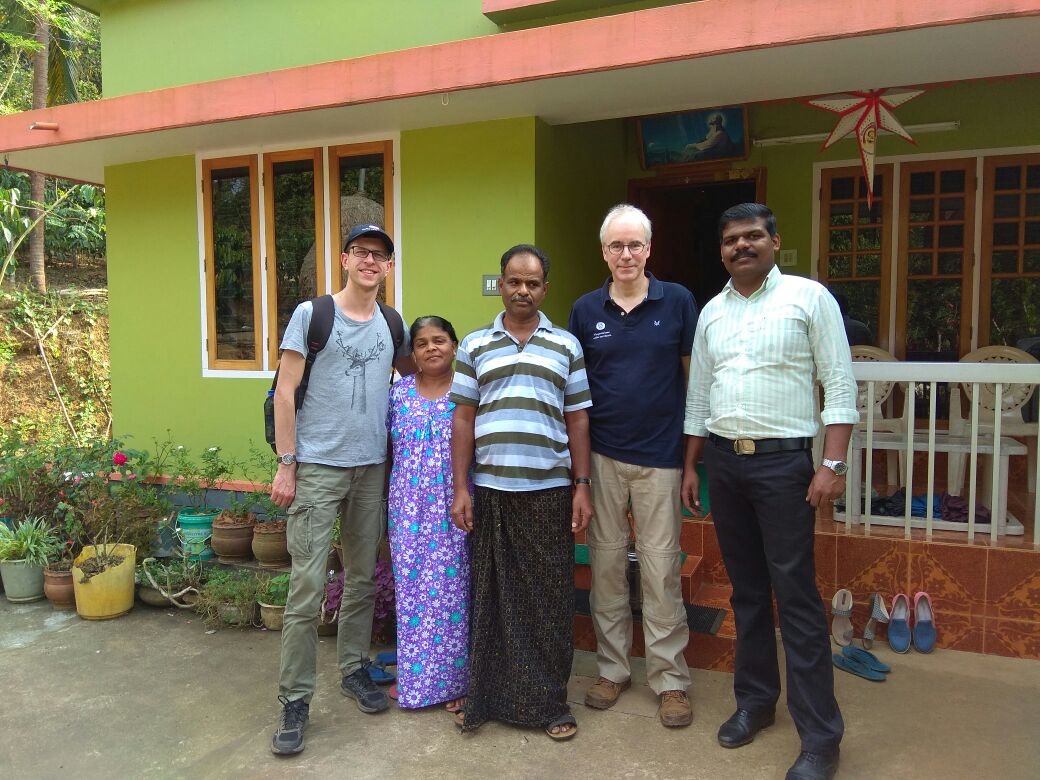 Left to right: Mantvydas (DRWakefield), Paul Matthew and his wife (owners of the farm) Simon Wakefield and Vinesh (Export Manager)

We then spent time with Lijan, (Export Manager) of Elements/Fair Trade Alliance Kerela (FTAK) and visited another three farms in the Wayanad area. One farm was run by Mr. Paulose, an 82-year-old gentleman and his wife who had recently been awarded the best farm for sustainability, assisted by his son and family. The only products he needed to buy for his family were salt and sugar. It was a common story with these farmers, they want to be organic not only for a better price, but they really care about their environment, soil, culture and they want to eat organic food.

Mr. Tomy Matthews (Gen Manager) who is well known in the Fairtrade circle met us at their office in Ulikkal where they also process coconut oil. This particular day was dedicated to women and we were then cajoled into speaking at their forum. 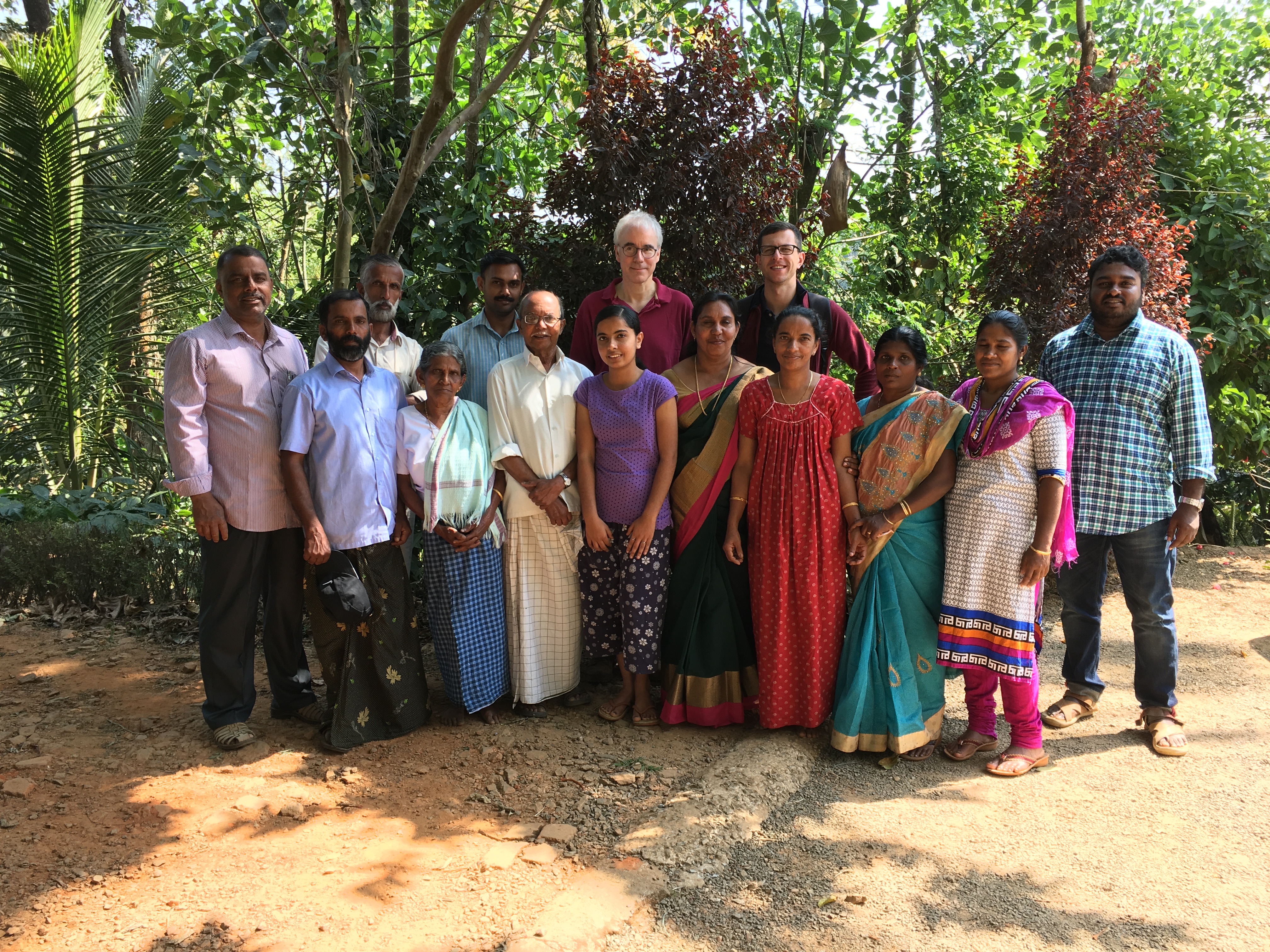 FTAK farmers are members of Self Help Group (SHG) which was established in 2013. SHG is a community which shares information and helps each other, they try to sort out issues and difficulties while doing all types of farming. There are about 4,800 members of SHG, of which around 1,500 are women. SHG has meetings every 15 days with a representative from each area. A small membership fee is involved but not a significant amount. The fee is used to provide loans for members when they want to buy some more costly equipment, or other things related to farming. Farmers share farming techniques with each other and ideas on improvements.

We also had a chance to visit the Seed Festival 2018 which has been organized by Elements/FTAK for the last seven years and its popularity increases year on year. The festival gives farmers a chance to exhibit all their produce, to swap, trade and sell seeds. We have never seen so many types of bean, rice and tubers in one place – one community had 361 products! The day we visited was dedicated to women. We had the honor of being introduced to the community as coffee buyer who they have been working with for 10 years, it gave us a chance to say thank you to the community for what they have done – it was truly an honor.

The last leg of our journey took us on a seven hour drive, an overnight stop, followed by another five hour drive to Plantrich in the Idukki area. This is a very mountainous region, with hairpin bends followed by hairpin bend in a lush and almost vertical topography.

Plantrich was formed in 1997 and concentrates on coffee, but also grows pepper and ginger. Mr. Bijumon was a great host and showed us their agricultural garden for crop trials, where their wet mill is located before moving on to see a farm using historical farm processes, closely followed by a somewhat larger farm concentrating on coffee but very much up to date with current process methods – this is the challenge of these different farms working together.

From our time in India we learnt about the challenges they face due to the stem border beetle and the way the Monsoon effects their crop, we can fight diseases but fight climate change – perhaps not. Every time we visit origin we see what a hard job it is to get a well processed quality bean from the seedling, and we very much appreciate all the work which goes into it.