A Sojourn in Ethiopia and… Honduras Handpicked

Our trip began in Bangalore with our friends and long-term export partner Allanasons. We were instantly struck by the never-ending amount of traffic and constant sound of vehicle horns. Soon though we were in the Karnataka countryside, where everything became calmer and more peaceful.

TO NOTE. The 2019 monsoon in India was more irregular than usual – starting in July rather than June and continuing with some heavy floods towards the end of the year (which are usually over by September) causing some significant loss in cherries especially for Arabica’s.

Harley is one of the most beautiful and advanced Robusta estates, located in the Manjarabad region around four hours drive from Bangalore. They have 200 workers on site who handpick and sort 15,000 kgs of cherries every day. They produce washed and honey Robusta coffee and washed, honey and natural Arabicas.

From 1865 to 1950 this land was cultivated by the British, then Mr Purnesh and his brother (both 4th generation farmers) took over. The Harley Estate today is a 185 hectare state-of-the-art farm. Around 70% of their coffee is Robusta, but not just any Robusta. For the last 14 years they have been placed in the Top 10 ‘Flavour of India’ competition in which 3,000 farms participate and only 40 are selected for blind cupping. And in 2019 they were awarded first prize for ‘Best Washed Robusta of India’.

What we noticed instantly when we arrived at the estate was the large amount of shade everywhere. Big silver oaks, jackfruit, soapnut, sacred fig, matti and many other jungle wood species hang over the plantation which created the feeling of being in a forest. This shade is what is making the coffee growing in India so unique. Less direct sunlight brings down the crop size (approx. 12-14 bags/ha) but increases the quality by slowing down the ripening process and giving sugars more time to develop. The result is a smooth soft cup.

The presence of the varietal ‘Old Peridenia’ for all Robustas is giving the unique taste profile to Harley. Another important aspect is to ensure the wet processing involves all steps – such as hand picking and sorting of red cherries, fermentation, correct washing techniques and soaking/fermenting in fresh water. All of this together is adding to the overall.

To give an idea; in India only 20% of the Robusta is washed, and of that 20%, 90% is NOT fermented but goes straight to washing. consistency and flavours. 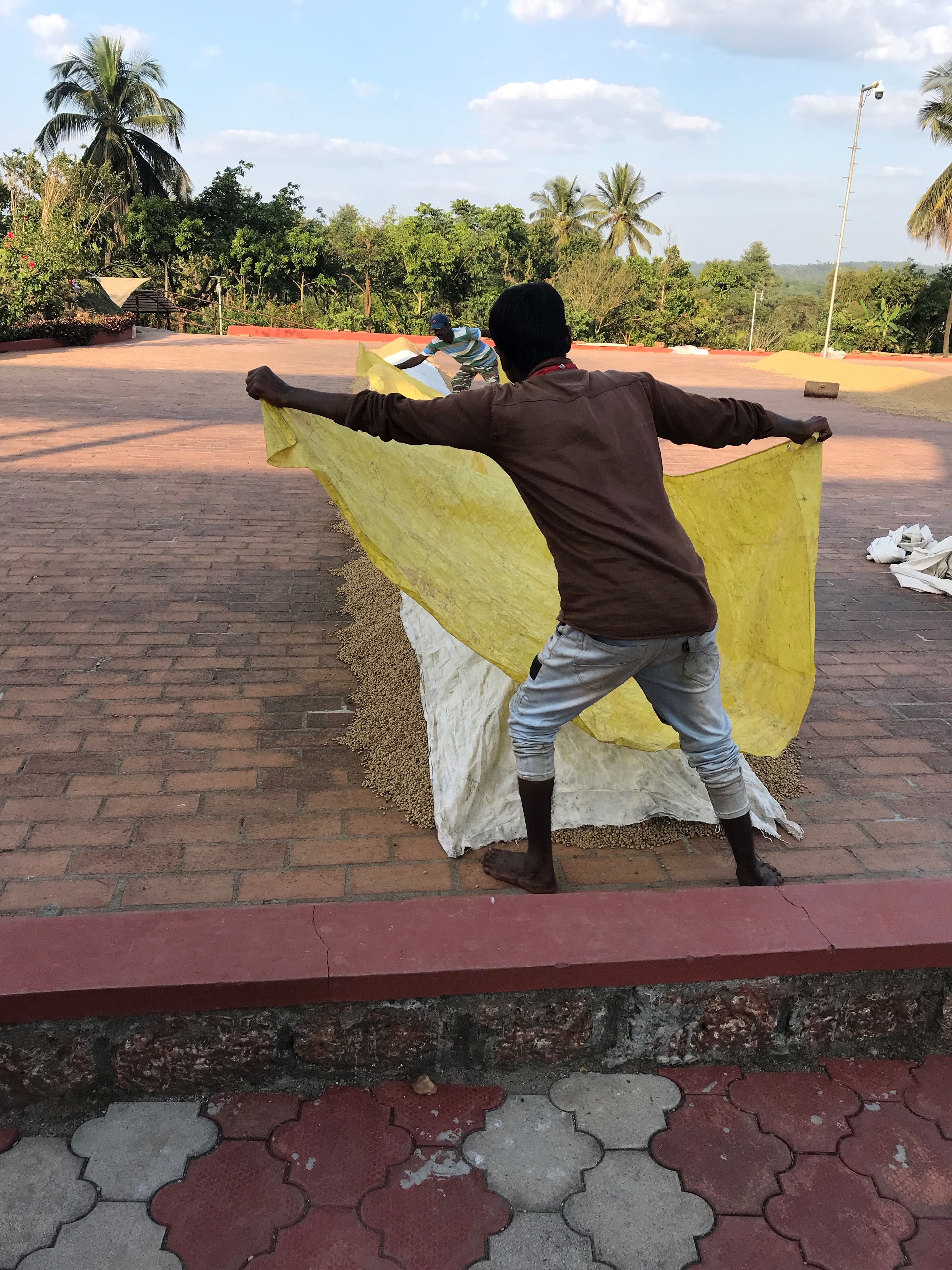 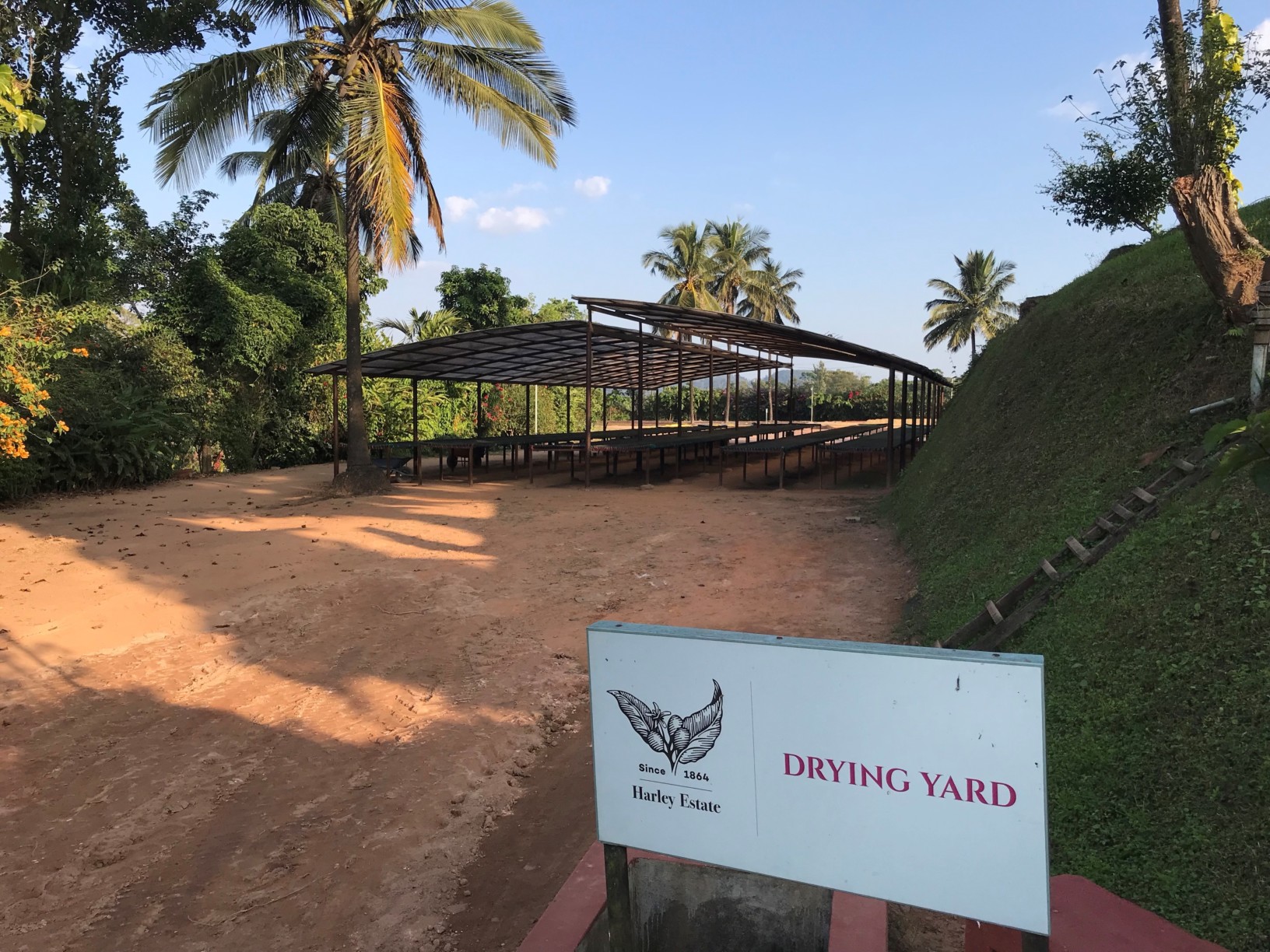 Drying is done first on raised beds, and then it is layed out for seven days on their drying patio’s, where at night they cover the beans to protect them from colder temperatures and moisture.

Although Arabica suffered from the late rains, Robusta plants held the cherries pretty well. There is plenty of water on site, with a number of beautiful waterfalls. Crucial to their water supply is their 2.5 hectare lake. This is now connected to a new machine they have invested in. It mixes the fertiliser with water and then distributes it via drip irrigation tubes (this used to be sprinklers) throughout the plantation. These tubes only cover 10 hectares, but they move them constantly to ensure the whole plantation gets irrigated. 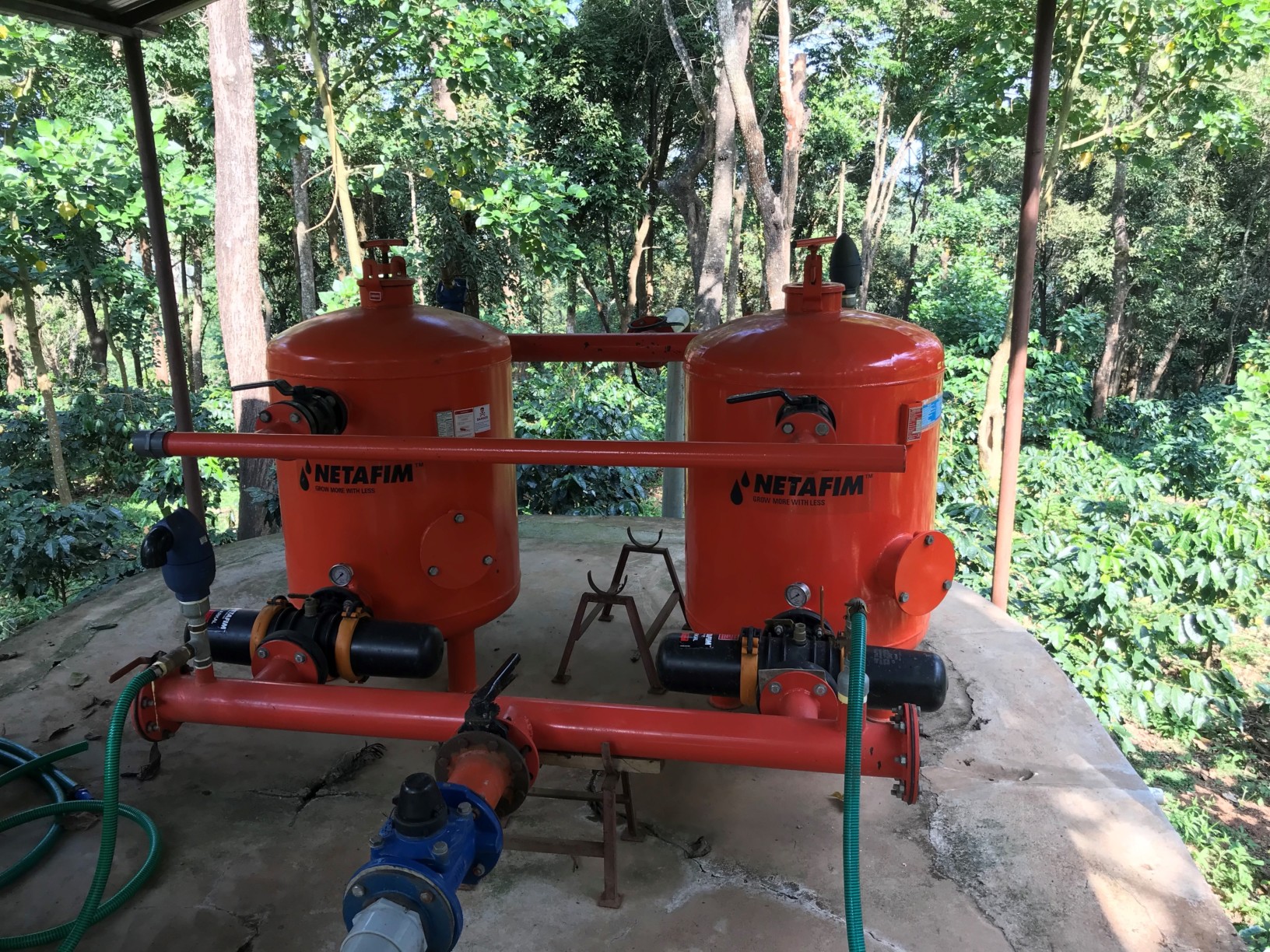 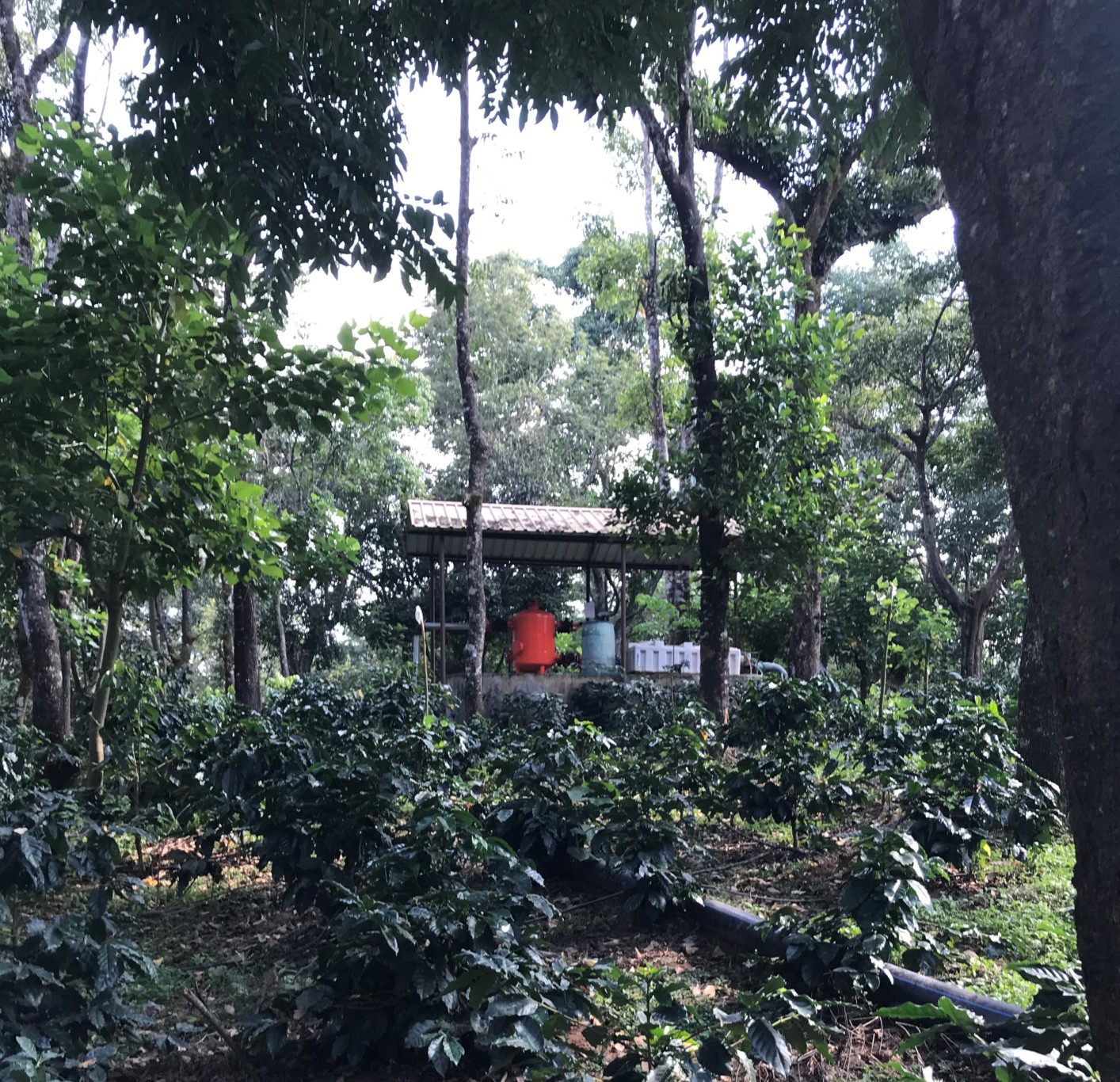 Water and fertiliser tanks are connected to drip irrigation tubes.

They have recently purchased a third neighbouring 250 hectare estate called Raxidi. It needs some work before it will be back in shape and up to standards. However, it is expected that good quality will be reached in 2021. Together with Harley and their other estate Kalleverdapura, their total size will be 750 hectares.

We were welcomed by Mr Pasha and his wife with an abundance of incredible food on the table. Mr. Manjunath, one of Allana’s agronomists, then took us out to the field and showed us the dense plantation where more mainstream and commercial coffee is grown. He explained that because of the rain during the ripening process of the cherries, moisture issues and cherries simply falling to the ground, there has been less output. Ripening has also taken one month longer than usual, due to less daylight hours. There have also been some stemborer issues – a type of beetle that destroys the stem from within and somethting that younger trees usually don’t survive.

What we saw here was a truly entrepreneurial approach to farming. The coffee that Mr. Manjunath sells is mostly commercial Robusta and a rust and stemborer resistant Arabica variety called Chandragiri which is showing great results. The leaves are narrower than the S795 varietal so you can plant more trees per hectare. He is also growing a number of other (more commercial) commodities on his estate including ginger, chilli, cardamom and vanilla (the price of vanilla having grown ten-fold since he starting growing and now approx $600/kg) which is helping him financially. Sadly the presence of elephants is destroying big parts of the plantation, and although he has invested in an electrical fence to keep them out, they are pretty smart and throw down trees to walk over the fence and get in.

Here we were shown a number of processes they carry out to ensure consistent quality. Firstly, each bag is sampled and checked for moisture. Most of the coffee is bought from small holders of 1-2 hectares who usually maintain their coffees well. However, it can happen that coffee is accepted at farm level but refused at the mill. Beside the de-stoners, density checks, metal detectors and other electronical defect separators, there are around 100 women who are carefully picking out unripe or broken beans. These are then sold, either to the internal market (usually mixed with 30% roasted chicory) or to other less quality focused customers.

We cupped some new crop special processed honey and washed Arabica’s and compared a number of different preps (standard clean to very clean cups) as well as a number of Monsoon Malabars. Our conclusion: classics such as Plantation A, Cherry AB, and our Tiger Stripes (which carry the Kapi royal washed Robusta) were our favourites and that correct preparation really does make a difference to quality and taste.

We then said goodbye and drove further south, straight through the Bandipur Tiger and Elephant Reserve to reach Wayanad, Kerala. 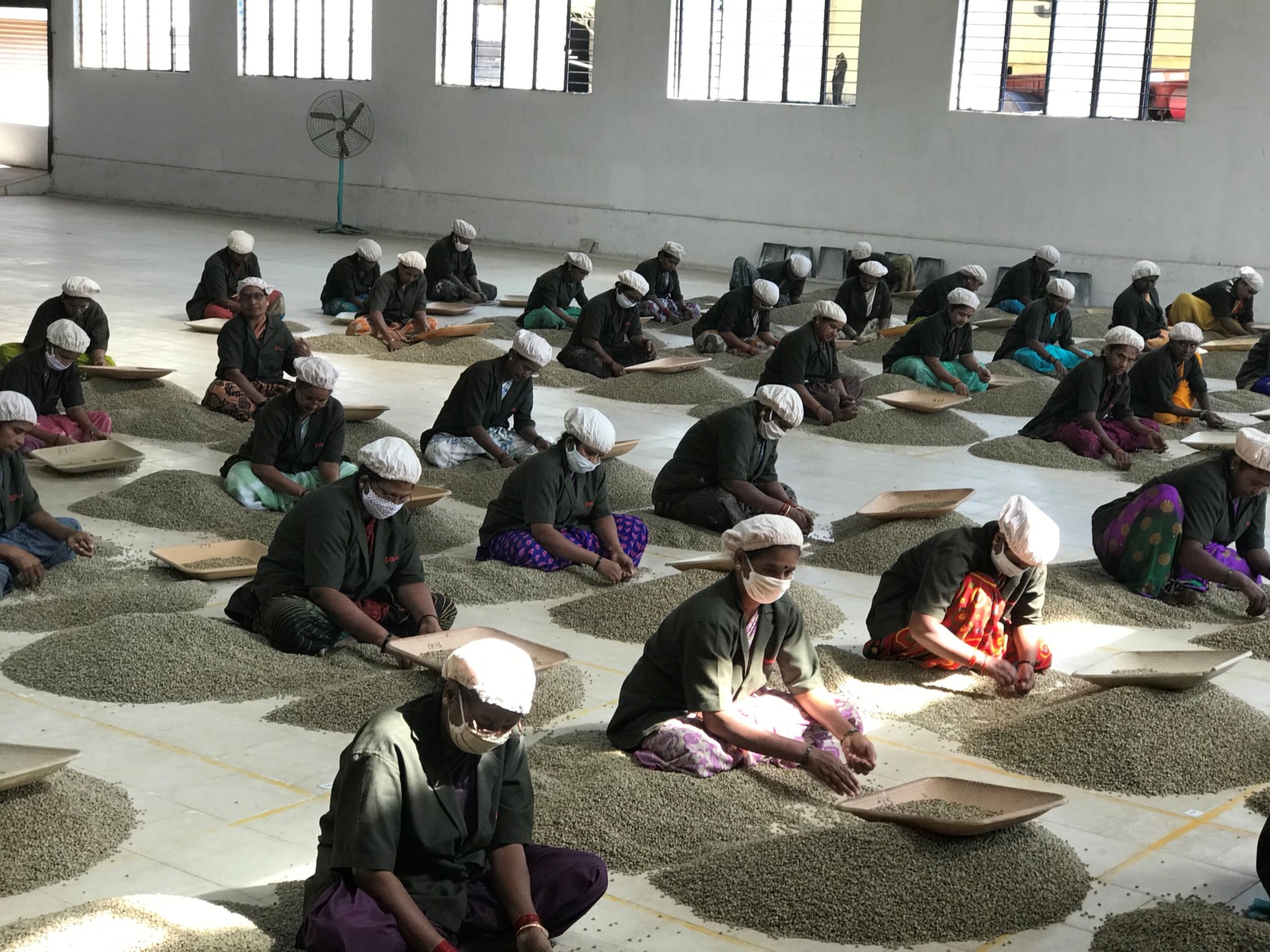 Here approx. 20% of India’s coffee is produced compared to the Karnataka region (where we had just come from) being around 70%. Elements is the founder, promoter and trading partner of Fair Trade Alliance Kerala (FTAK), a small farmer collective of 5,000 organic farmers engaged in responsible soil stewardship. Tommy, the owner of Elements showed us around Wayanad and a number of very small farms, where organic has become the norm. 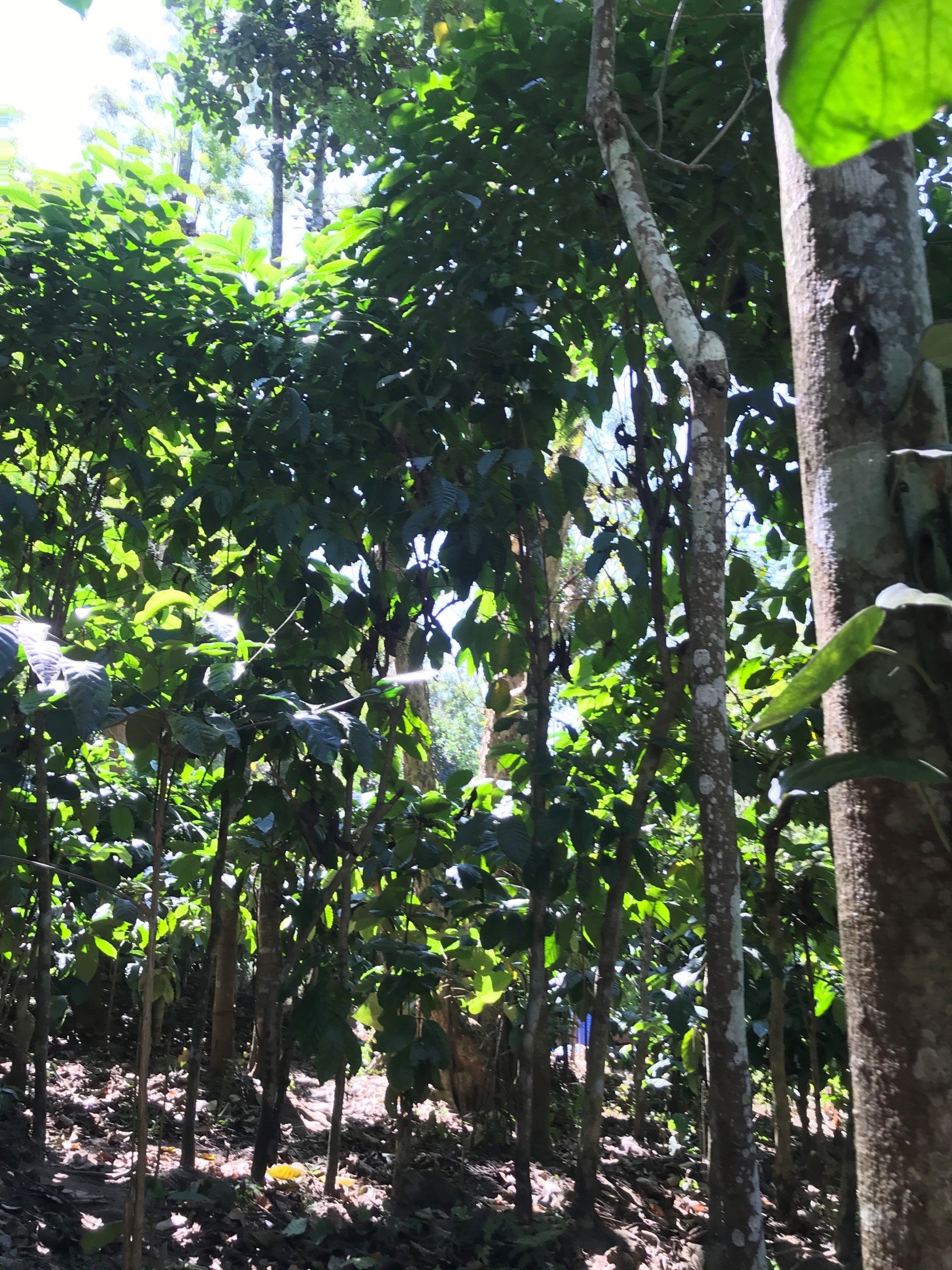 Robusta trees grow up to 10 metres high when you don’t prune them. 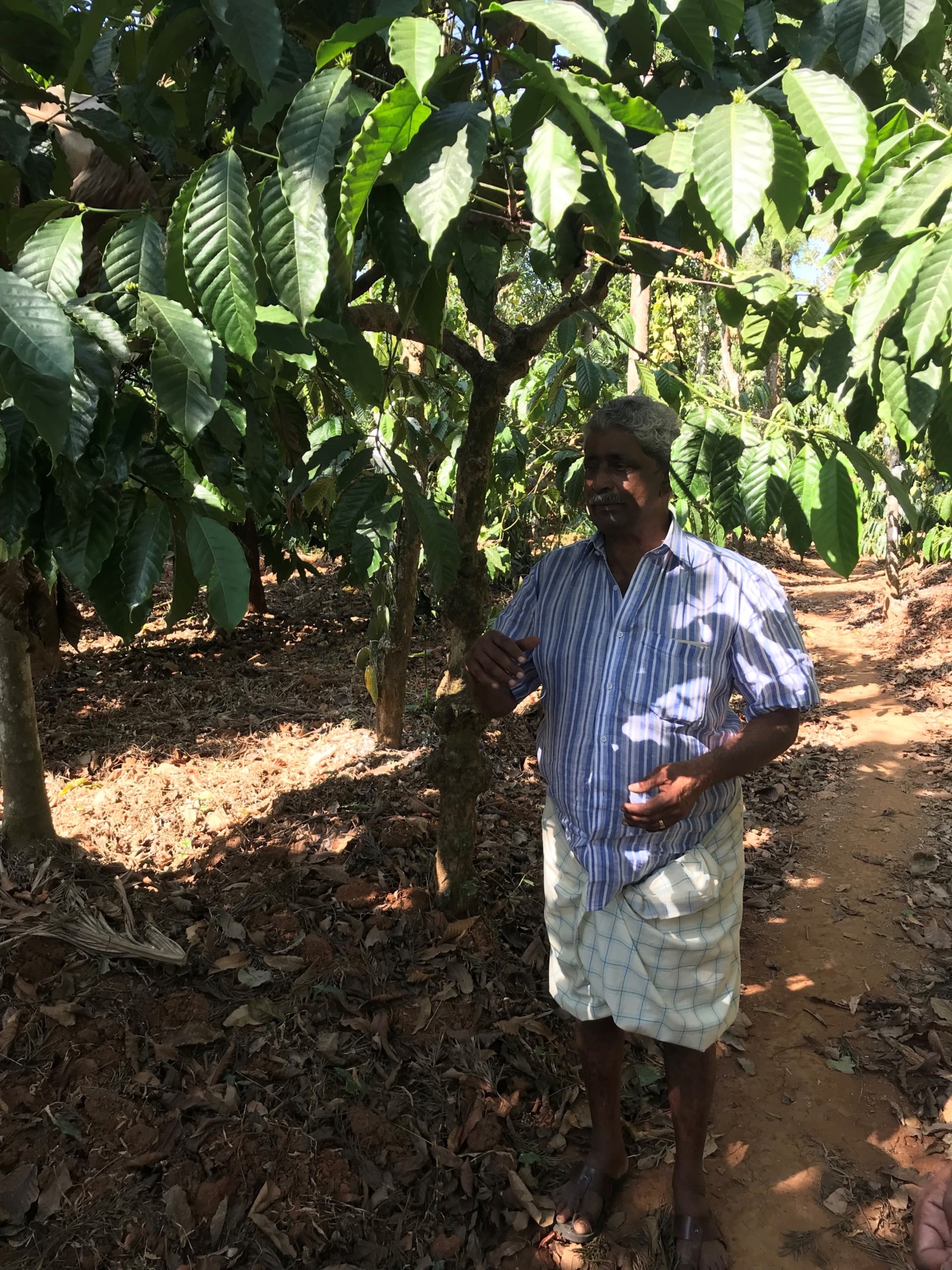 This traditional organic farmer decided to plough his land so that water can drain away during floods.

During a round table meeting we were informed that the minimum Fairtrade Robusta price is not always covering the amount spent on cultivation. However, by growing organic and inter-cropping a lot, there are major benefits.

Firstly, they become self sufficient with direct income and food security and secondly, they create healthy soil and micro climate conditions. Clove, nutmeg, cardamom and pepper are all sold as Fairtrade and the Fairtrade Alliance is subsidising them with cattle, poultry and stone housing.

We then finished the day and our trip with a couple of small farms right next to the Bandipur Tiger Reserve. The Forest Right Act (2006) has enabled an indigenous tribe of around 400 members to grow forest coffee, which was fascinating. 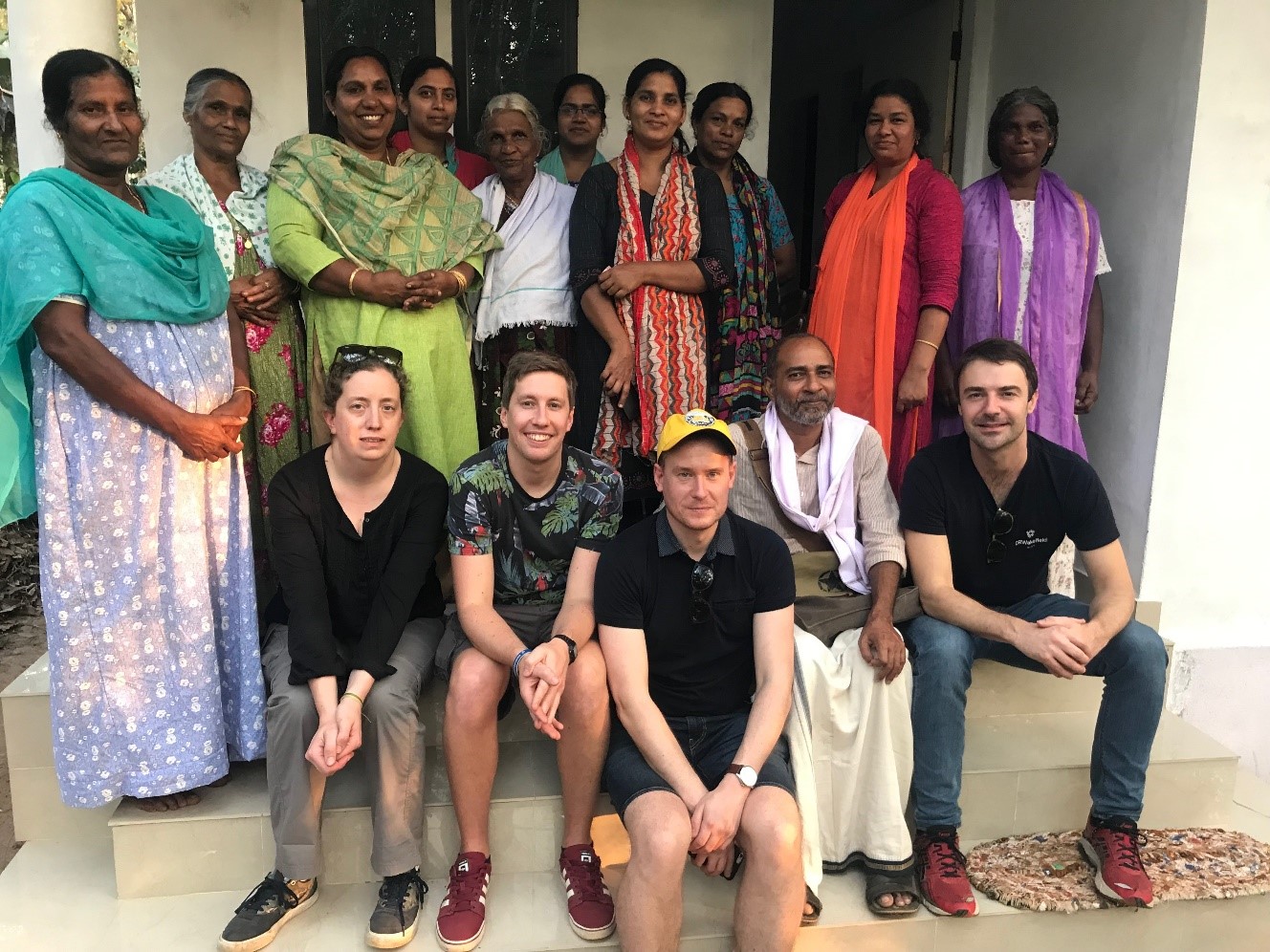 Looking back now on what was both a challenging but inspiring experience in India, three words spring to mind – crazy, contrast and bio-diversity.