Ecuador: Ama la vida is the government’s tourist slogan and translates as Ecuador: love life. Perhaps an overused phrase, but in my opinion, an accurate description of the people and culture. Ecuador is a friendly and welcoming place and while my trip was brief, I quickly became aware of the warmth of the people of Ecuador and their passion for enjoying life.

Little is known about Ecuadorian coffee due to the scarcity of it. However, some amazing cup profiles can be found in its rich terroir and it also offers some solid commercial coffees that could act as good blenders. In the specialty world Loja gains all the plaudits but this is not the only region in the country which produces top quality coffee. Loja is bordered on either side by El Oro & Zamora-Chinchipe, there is Carchi which borders Nariño, Colombia in the north-western part of the country, Pichincha which surrounds Quito, Manabí to the west, and of course, the infamous Galapagos islands. Although Manabí is better known for its commercial coffees and doesn’t have the altitude of the other regions, if you look hard enough you can find some specialty coffees of note. 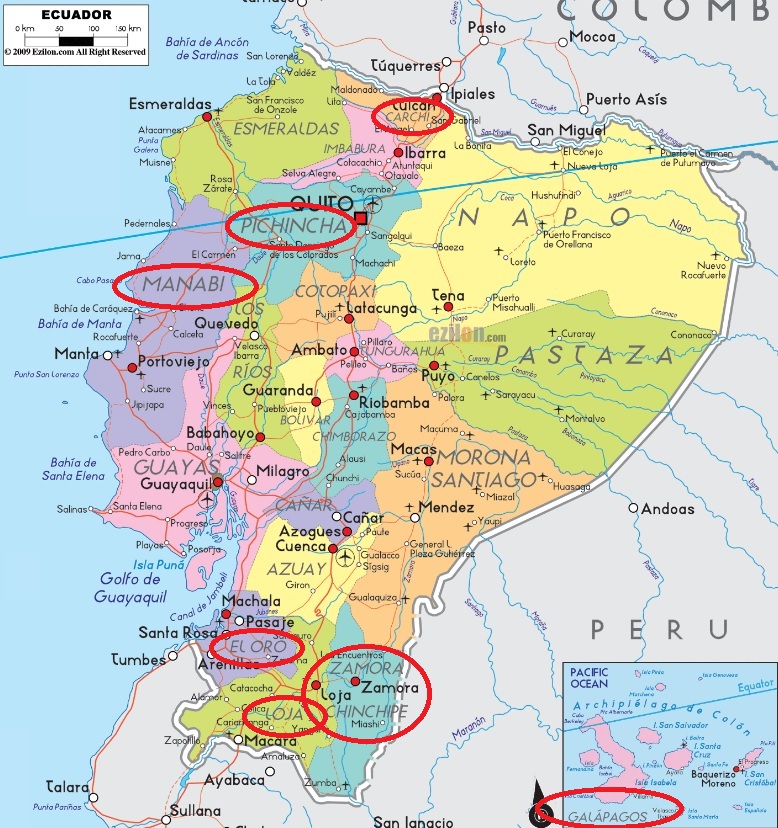 The harvest for most of the coffee producing regions starts end of May/early June and winds up in September. The two exceptions are Carchi, which has two crops like its neighbour Nariño; and the Galapagos islands, which also has two harvests.

There are three main ports in the country: Guayaquil, Manta and Esmeraldas. Guayaquil is the main port and the most populous city in the country. The majority of the dry mills are located in Loja, Guyaquil & Quito.

A salient fact about Ecuador is that most of its coffee is naturally processed. Don’t get too excited though because the vast majority of these naturals are lower quality arabicas destined for instant coffee. Ecuador is in fact the 4th biggest exporter of instant coffee in the world and thus a great deal of its commercial coffees goes to the instant manufacturers. However, to focus on this aspect would do the other regions a great disservice. As the results of the cupping competitions show, quality is on the up and focus on post harvest processing is translating into better cup profiles.

I was lucky to be exposed to a wide variety of single estates, cooperatives, and exporters. I attended the Macrorrueda show which in essence, is speed dating for exporters and international buyers. In total, I met 25 different coffee people of different capacities and expertise. The key takeaway was the passion of the producers and their thirst for knowledge. I was quite surprised as many of the people I spoke with did have an export licence but had never exported coffee before. The export side of the industry seems to be opening up and becoming more fragmented as traditionally the export of coffee was concentrated in the hands of a few firms. This presents great opportunities and new access to producer groups, but many still have some aspects to tweak and things to learn before they are ready for exporting. Certainly some exciting prospects for the future, but only a handful are ready to export this season’s (2017/2018) crop.

Due to heavy rain in March and April time the 2017 harvest has been delayed by 4-6 weeks. I visited some lower altitude farms in Manabí and they were expecting the harvest time to start mid-July. Coupled with the earthquake that occurred there in mid-April, it has been a tough year for not just coffee producers but everyone in the country.

In summary, Ecuador is an exciting origin on the up. We look forward to exposing you to its producing regions and cup profiles. The growers and exporters I met are all eager to put Ecuador on the specialty coffee map and highlight its rich terroir. Towards the end of summer when we have a range of samples, we will be holding a grand cupping session. Date to be decided but likely the end of July/early August. Watch this space!