Brazil – The hidden detail… Getting to know incredible India…

Ethiopian Airlines’ motto is ‘the new spirit of Africa’. It’s a big claim but in regard to coffee you could plausibly change it to the ‘the spirit of the coffee world’. Ethiopia is a unique country and is, in many ways, the Mecca for coffee professionals: floral cup profiles from Yirgacheffe, a strong domestic coffee culture, varietals that are found nowhere else on the planet-the list goes on and it’s safe to say I (Henry) was very excited to go. There is a certain mysticism around Ethiopian coffee and I was determined to find out more about this special origin.

I arrived at Addis Airport and immediately took a flight south to Jimma, in Oromia. I had been accustomed to seeing Jimma spelt ‘Djimma’ but since there is no official translation of Amharic to the Roman Alphabet, this was the first of many times I saw variations of a name that was familiar to me, spelt differently. This allows some poetic licence and means you can pick which translation you prefer; sometimes I even noticed different spellings in the same document or sign. Ethiopia is split up into states and the majority of coffee produced in this origin comes from Oromia and the Southern Nations, Nationalities, and people’s region (SNPPR). This trip, due to the civil unrest, we had to cancel the Oromia part. As soon as we got to Jimma, we headed south west into SNPPR. We passed through the town of Bonga in Kaffa: the place where coffee was first discovered according to the sign that greets you as you enter the town. As much as we’d have liked to have visited the coffee museum there, we had no time to stop, and headed straight to the town of Mizan Teferi, in the heart of Bench Maji. Bench Maji zone, closer to Sudan than the capital Addis Ababa, is a fascinating place that I believe will become more and more famous in the speciality coffee world in the coming decade. We were met by Terefe Godi, the Marketing Manager at Bench Maji Cooperative Union. In Ethiopia, unlike places like Honduras or Peru for example, cooperatives are not allowed to export, only cooperative unions. Bench Maji Union is comprised of 68 cooperatives spread across Bench Maji region. It exports washed and natural coffee certified as Fairtrade, Organic, Rainforest and Utz.

Unions tend to receive more support from the government compared to private exporters. For example, traditionally the government would not allow for export contracts going further than 3 months forward but changed the rules for unions who can now make contracts up to 8 months in the future. These unions support thousands of families and in Bench Maji the average farm size is between 0.25-0.5 hectares. The smallholders, by coming together to form their cooperative and in turn uniting with other cooperatives to form a cooperative union, are able to get a better price for their coffee compared to independent farmers of the same size. They are however, not obliged to hand in their coffee to the cooperative. This is not an issue though as the cooperatives in Bench Maji Union are the highest payers across the region, to ensure they get the best coffee. The high price only gets apportioned to ripe red cherries to maintain incentives to pick only the ripest fruit. 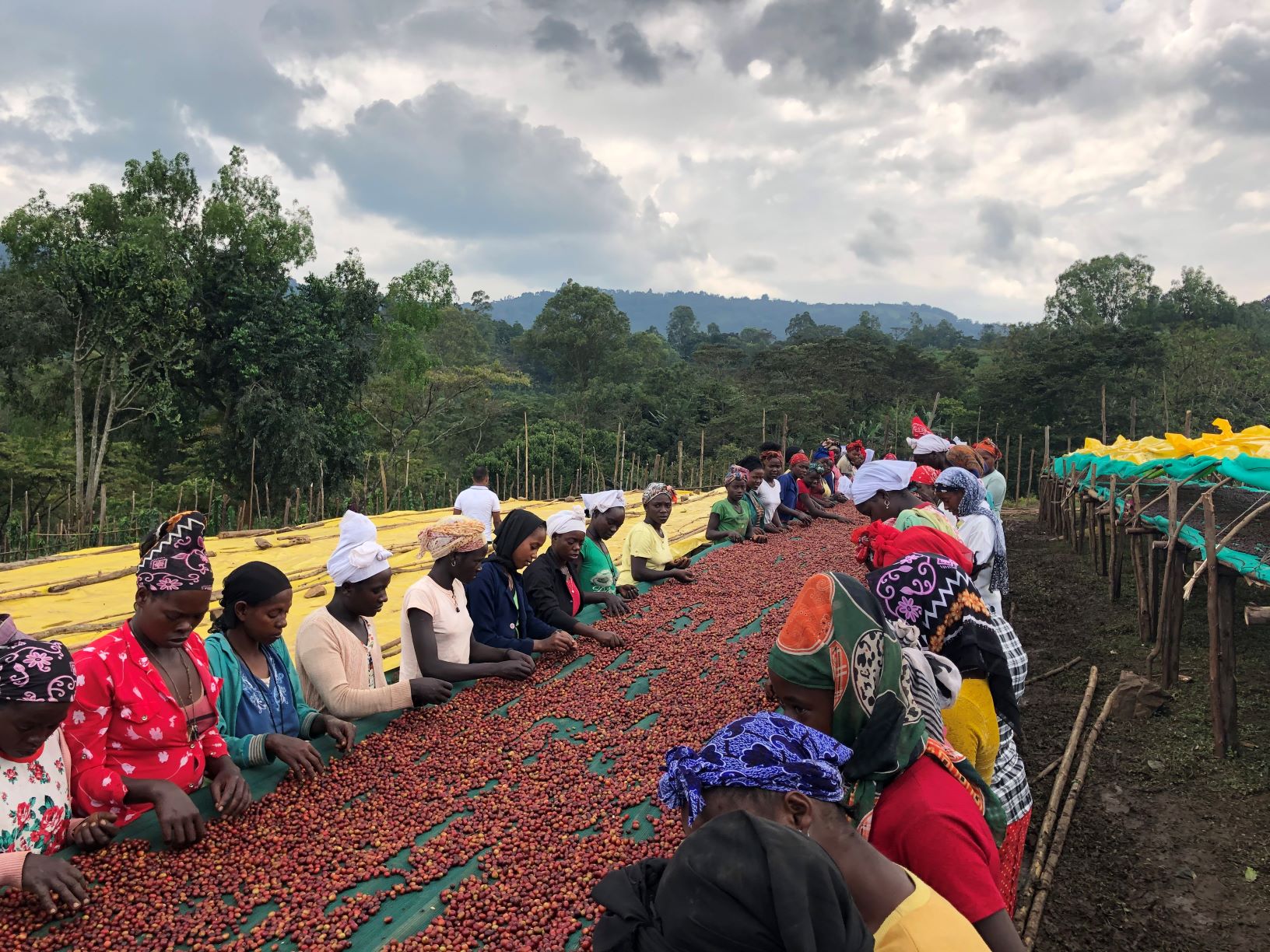 Talking of fruit, there was not much left on the trees during our visit. This might come as a surprise because we visited in mid-November, but Bench Maji’s harvest is a few months earlier than other regions. We see this as a big opportunity to get new crop Ethiopians a few months earlier than when we’ve all become accustomed to. Early indications show the harvest has been good, but volume is slightly down on last year. After catching up with Terefe & Gedahun, the General Manager, it was time to visit some washing stations. 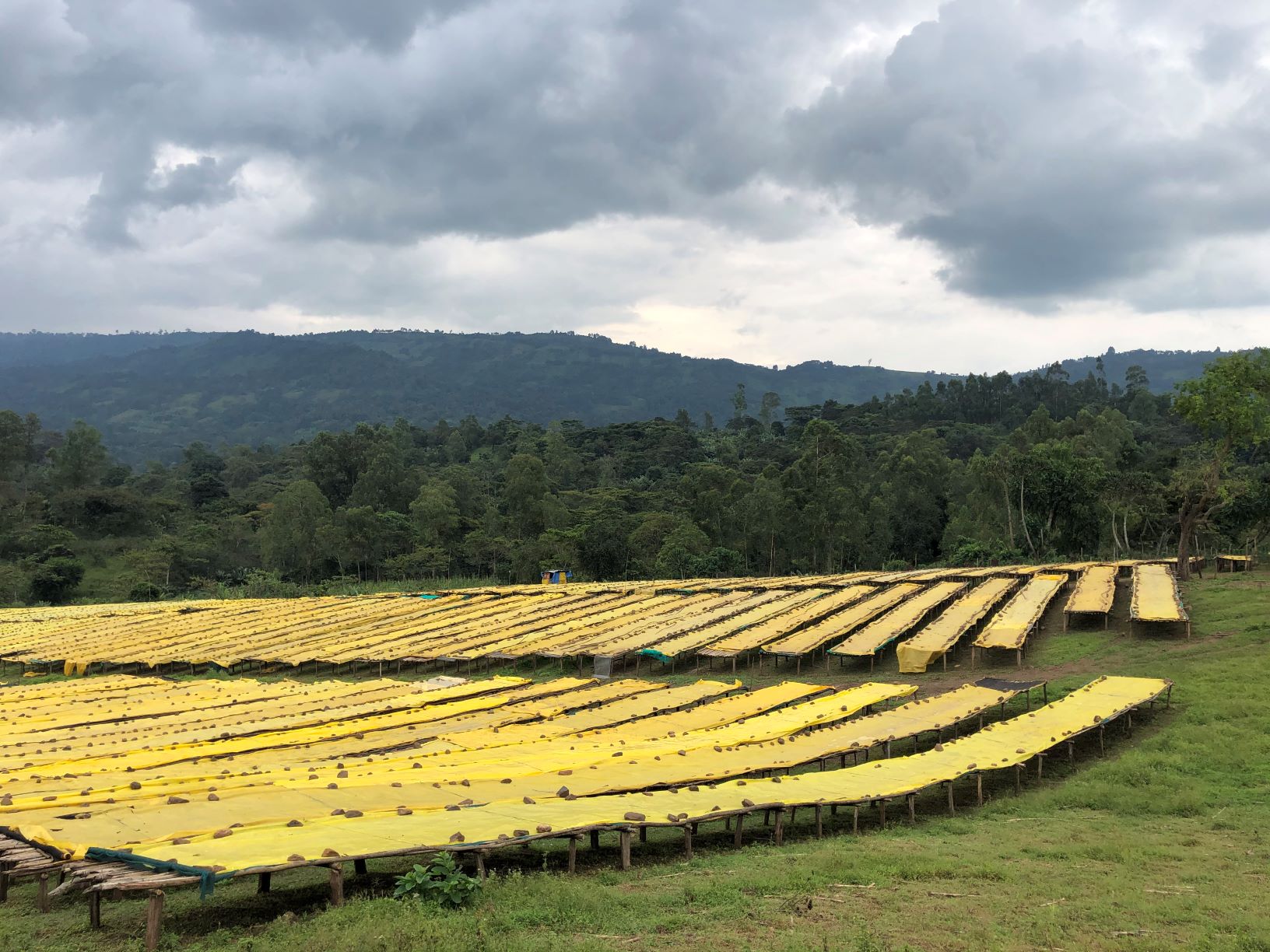 Last year the union encouraged the cooperatives to centralise their processing in a bid to improve quality. They found that when producers dried their cherries at their farm, it produced more uneven cup profiles and often more defects. Therefore, more and more cooperatives have expanded the number of raised beds at their centralised washing stations so they can receive their farmers’ cherry and dry it all together using the same method. Last year 18 cooperatives employed this centralised drying method and this year 45 out of the 68 are. We expect a significant increase in the consistency of their coffee as a result. We visited Janchu, Gariqin and Gizmeret cooperatives and all their raised beds were full of cherry. On average Bench Maji Union had harvested around 80% of the crop, and Gariqin was around 50% done. Gizmeret was processing some washed coffee when we arrived and hope to increase their capacity to produce washed coffee over the next few years. From their washing station you can see a mountain called ‘Amora Gedel’ (above), where locals say the famous Geisha variety was discovered in the 1930s. I’m not sure if that means Gizmeret coffee has a higher proportion of Geisha than other cooperatives but when we receive samples we’ll let you know! Fingers crossed for the florals.

Coffee is indigenous to Ethiopia and is the gene pool for the drink we all love. Bench Maji is unique in that the majority of all coffee produced there is what they describe as ‘forest coffee’. This is coffee that is managed by smallholder farmers grown under shade in the forest, using varietals that are indigenous to that forest. By avoiding the practice of mono variety farming, they see their method as preserving coffee’s gene pool and ensuring that these ancient varieties live on. That said, all farmers need productive plants that give good yields and there is local research going into identifying which ones give a better yield and cup. How this is managed for the members is being discussed at the moment. They are doing a pilot project distributing 7410 seedlings to farmers but if this practice is rolled out there is the risk of losing the gene pool the union has worked hard to protect. Perhaps a higher premium for this forest coffee would be the best way to compensate for lower yielding varieties? Maximising profits for farmers in a way that protects biodiversity is challenging, but the union believes it can achieve both and is experimenting with different projects to achieve this aim.

We cupped some coffees at the Union’s office in Mizan and the best coffee on the table was a natural from Janchu Cooperative. It was still a touch fresh but showed great promise of a well processed natural: blueberry, cherry and peach were there in abundance. After the fruit foray we had to return to Jimma to take our flight back to Addis.

We met Alemayehu Dagne from Tracon trading, a local exporter we work with. He kindly showed us around the Ethiopia Commodity Exchange (ECX), where the majority of coffee that is exported is traded. Its endured much criticism since its inception in 2008; most of which has centred on the limited traceability it offers. However, with the introduction of a bag tagging barcode system in 2016, now all coffees traded can be traced back to the seller who handed in the coffee to one of the many regional ECX warehouses across the country. Previously, the only traceability you got was the growing region the coffee came from. 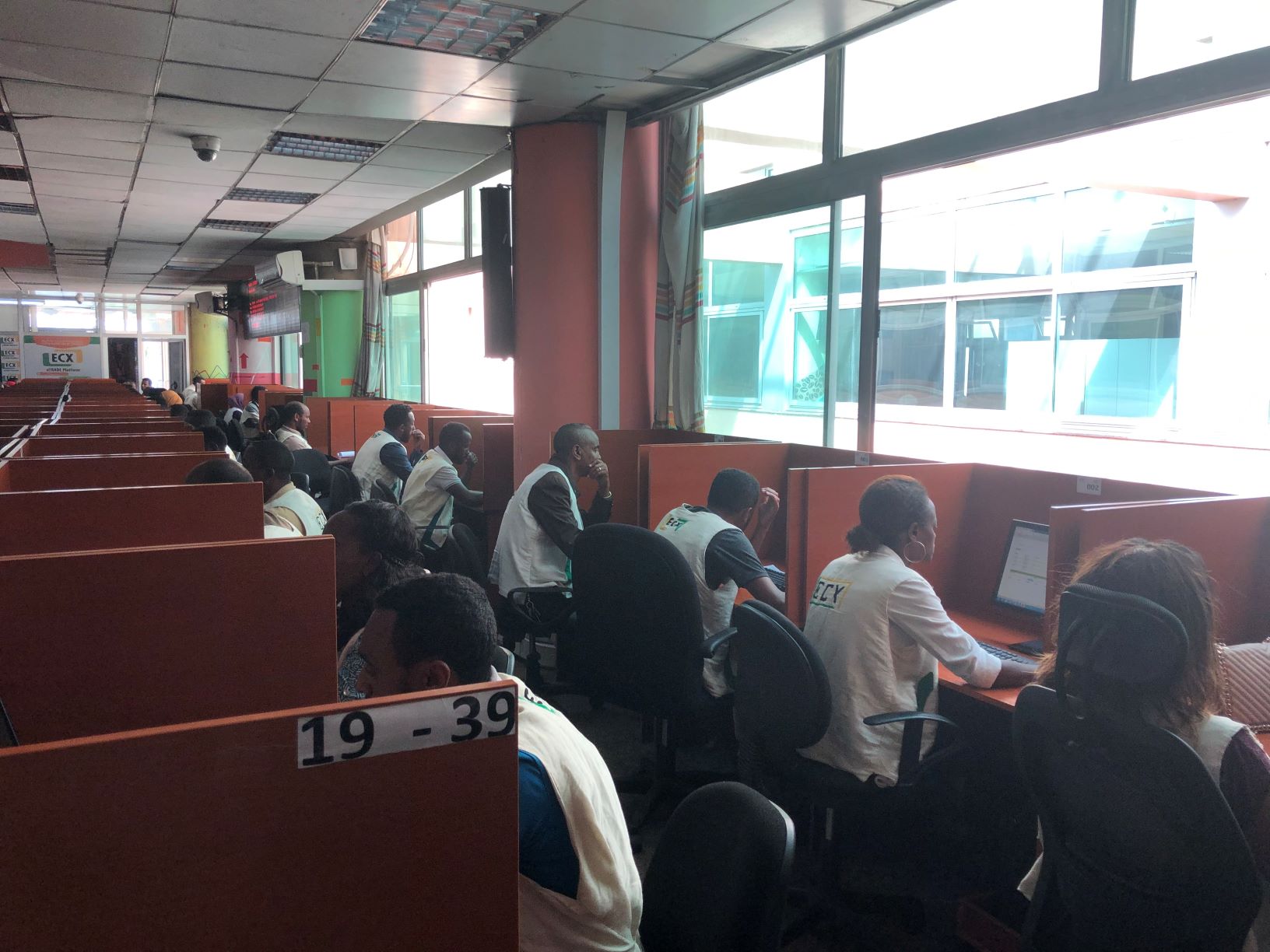 After our whistle-stop tour we went to Tracon’s office where they also have their cupping lab and dry mill. We cupped a range of coffees with Abdu and Winbit from the cupping team. There were some nice natural and washed speciality coffees from Limu, although they were still very fresh. When the season gets going in Yirgacheffe, Guji and Sidamo, we’ll be sourcing the tastier top lots. They might be pricier than usual as the local prices for conventional coffees are much higher, due to fears of a shortage of coffee in certain regions. After a brilliant few days in Ethiopia, it was time to fly to Kilimanjaro in Tanzania.

A short drive from Kilimanjaro is a town called Moshi. It’s where the Tanzania Coffee Board is located and, before the introduction of a rotation policy, was the sole place where the coffee auction was located. Nowadays the auction rotates between Moshi, Mbinga and Mbeya. Tanzanian exports are dominated by multinationals and I was off to see a locally owned independent exporter called ‘Mambo’. Mambo has their office and cupping lab in Moshi, and their warehouse and dry mill in Morogoro, a town on the way to the port of Dar Es Salaam. Mambo has developed relationships with numerous cooperative societies across the country and has access to some great coffees. The majority of the Arabica is fully washed and, like I mentioned earlier with regard to Bench Maji, some producers process their coffee at home, and some come together and process their coffee collectively, at what’s known locally as central processing units (CPUs). I headed straight to the Mambo office and had a meeting with Athanasio, the Managing Director, and his team. Mambo sees itself not just as an exporter but as a tool to help train producers on how to improve quality and therefore get a better price for their coffee. Mambo employs three ‘friendly supervisors’ which circulate between the cooperative societies they partner with and advise farmers on best practices and certifications. After our meeting, it was time to rest. The following day we would visit some cooperative societies. 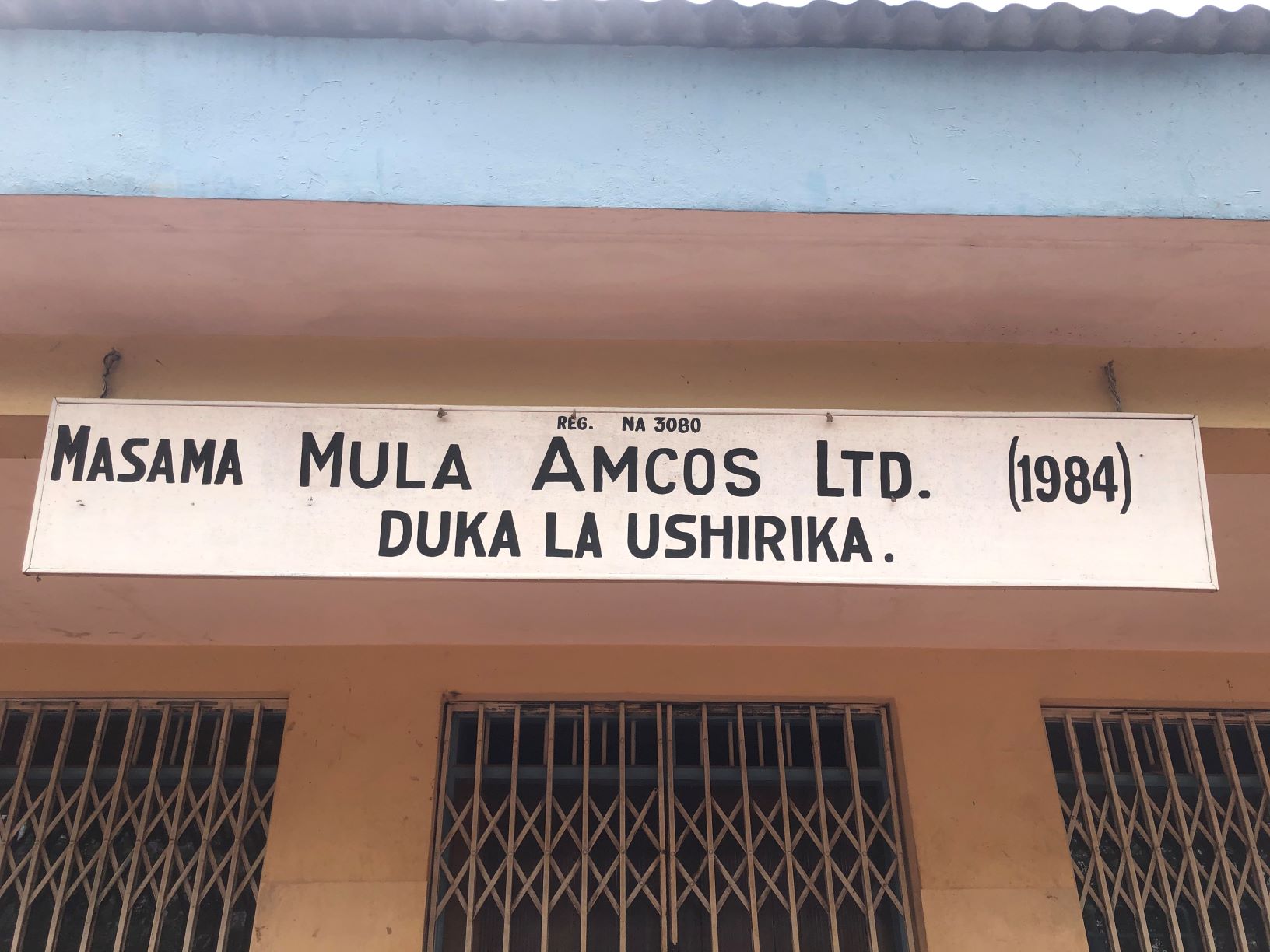 We were greeted by the chairman, Philemon Ndosi. The cooperative society is located around 30 minutes from Moshi town and is therefore in the Kilimanjaro coffee region. Typically, they expect rain from February to June, but this year there was a scarcity of rain and this was the main driver of the large drop in volume they experienced. Last crop they processed nearly 50,000kg worth of parchment, and had only processed 2,000kg of parchment from the start of the harvest up to our visit! With only another 7 weeks or so left of harvesting, this is an extremely concerning figure. Kilimanjaro area as a whole is 35% down on last crop, but it looks like the drop will be more Severe in Masama Mula. 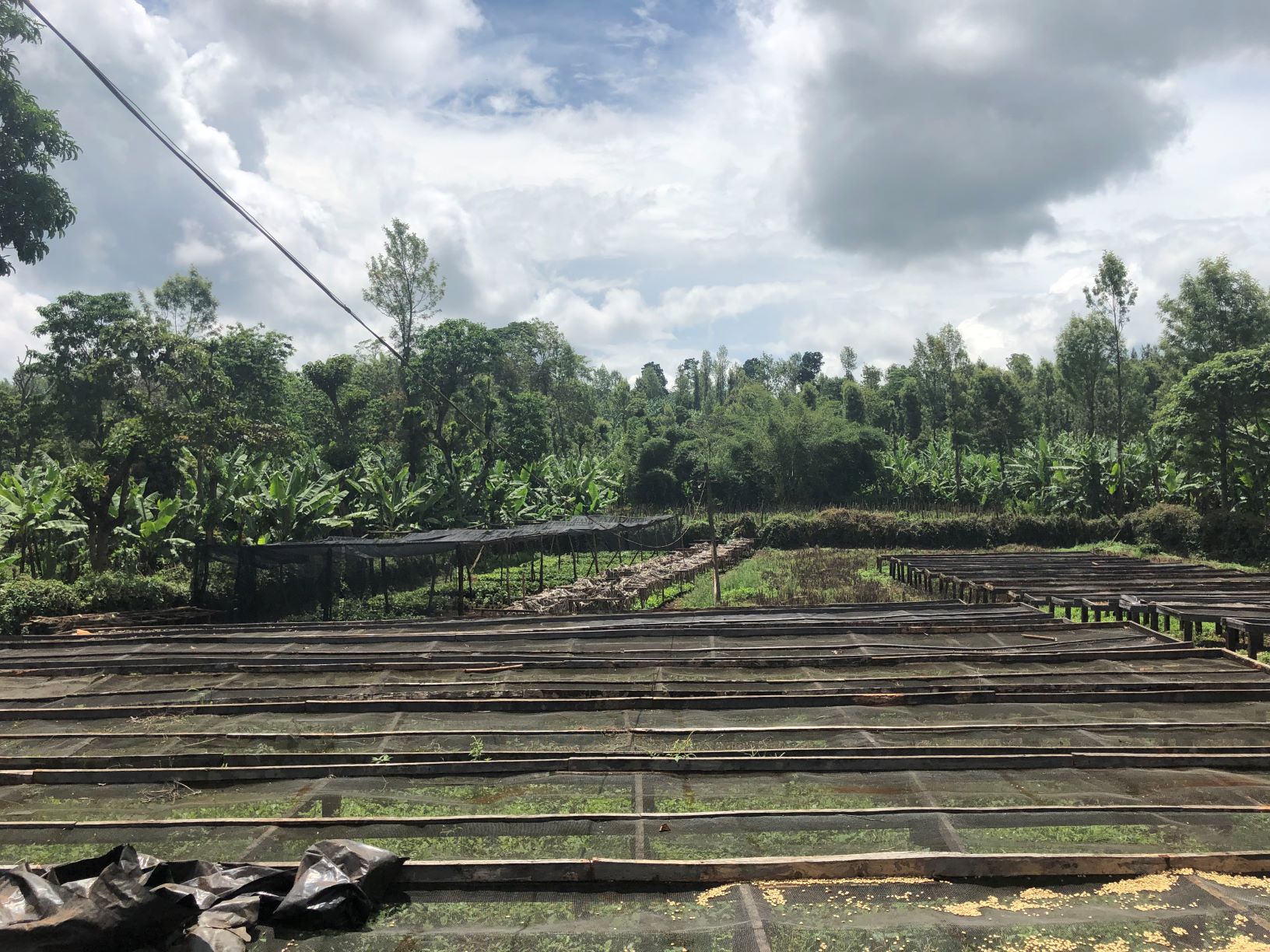 In Kilimanjaro many of the farmers inter-crop their coffee with banana, beans and maize. Due to the low coffee price, more and more farmers were turning to bananas as a more profitable alternative to coffee. This story was commonplace among our visits to producer groups across Kilimanjaro. We visited a cooperative society called Uru and their production has halved in the last twenty years due to a longer-term trend of ageing coffee farmers not being replaced by the younger generation. We met one farmer, aged 21, called Furaha. She explained that many of her contemporaries moved to the city and were not interested in growing coffee. She knows the area produces good quality coffee and was confident that over time that would prevail and help them get better prices and draw people back to the farms. The most common varieties in the area are Kent and Bourbon and do indeed produce good cup profiles. We hope to develop long term relationships with producer groups in these areas and showcase the best they can offer.

We’re excited about our first container of the season arriving in the middle of December. So keep your eyes peeled for some tasty Tanzanians hitting UK shores soon!