The Multiplicities and Singularity of… Reconnecting to Brazil

At the beginning of August, Henry and myself embarked on a trip to Peru. Henry had been many times before, but it was my first visit. The last time DRWakefield visited Peru was in February 2022, but this was a shorter trip, mostly of meetings in producers’ offices, and so we had not made it out to actual farms in Peru since before the pandemic, so we were well due a visit!

We flew out amidst all the drama and delays in UK airports, but luckily we were not affected, and we made it to Peru smoothly!

Our first meeting of the trip was with Manuel and Esther from Perunor in their offices in Lima. Perunor is an exporter who works with many cooperatives and associations in Peru. When working with a new group, Perunor really takes their time to get to know the people, and often it takes 1-2 years to establish new relationships. The market in Peru has become very fragmented, with countless groups popping up all the time, making a thorough process of vetting and getting to know groups a good way for Perunor to ensure they are working with groups who are aligned with their values and ways of working. On this trip, we visited Aprysa and Aprocoyce, both associations whose coffee we buy through Perunor.

The main challenge that Perunor are facing is that this year’s crop is down 30-40% because of the unpredictable weather. This is the same story we heard repeated by everyone we met in Peru. This year the rain has been different from the norm. Rather than raining in the first few months of the year and then drying up, the rain has not stopped and tends to come in unpredictable bursts making it hard to dry coffee on patios outside.

The other key challenge that Perunor, and all producers across Peru, are facing is the rising costs of production and living. Particularly the way the price of fertiliser and fuel has already had a significant impact. 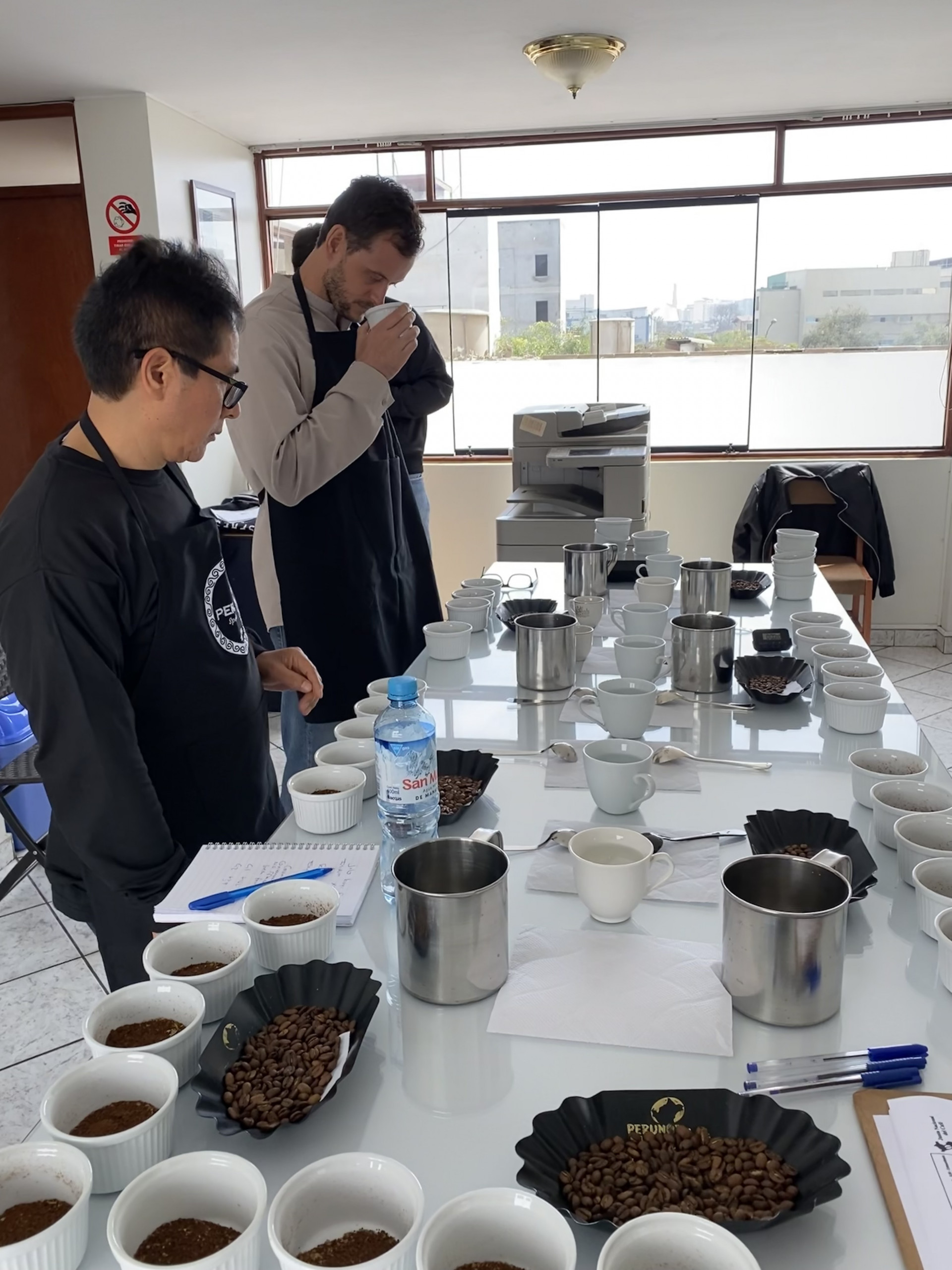 Henry and Manuel cupping in the Perunor Lab

The following day we flew north to Chachapoyas and headed from the airport a further 4 hours to Mendoza town in Rodriguez de Mendoza district, where both Aprysa and Aprocoyce have their headquarters.

First up we saw Aprysa. They were founded by Katshuiko, who is also their president, back in 2014. They are the smallest group in Mendoza (there are about 8 groups in Mendoza in total). They prefer it this way as it keeps it small enough that it feels more like a family. Currently, they have 250 members, 50% of which are women, and 7 full-time employees. They are Fairtrade, Organic and Rainforest Alliance certified. Certifications and quality are their main focuses as they see them as the way to get the best prices for producers.

Nina Belinda with Katsihuko in her coffee nursery

Other than a lower crop volume and the rising cost of production. The biggest challenge Aprysa is facing is most young people from coffee-producing families move away to towns and cities to study or for work. If this carries on, they will have an ageing population on their hands. Therefore they are trying to make being a member of the group as appealing to young people as possible. For instance, they offer a de-pulping service to their farmers if they cannot, or don’t have the time, to do it themselves.

After meeting in their offices, we visited one of their member’s farms nearby, Nina Belinda. She has a large range of varietals on her farm, including Pacamara and Catimor. It used to be largely Typica, but those trees were wiped out by the Roya. Interestingly she has grown 2 Robusta trees to diversify. They were 3 years old and producing their first harvest this year. This was amazing to see as Robusta is not common in Peru at all. Although, of course, the cherries are kept separate from the rest of her farm, so everything she harvests and takes to Aprysa is 100% arabica. She has grown guava trees on the farm for shade. She chose these because they are a good nitrogen fixer, keeping nitrogen in the soil and making it good for growing coffee. Prior to being a member of Aprysa, she was with Perhusa, the biggest exporter in Peru, but she prefers working with Aprysa as they are good people who treat her well. 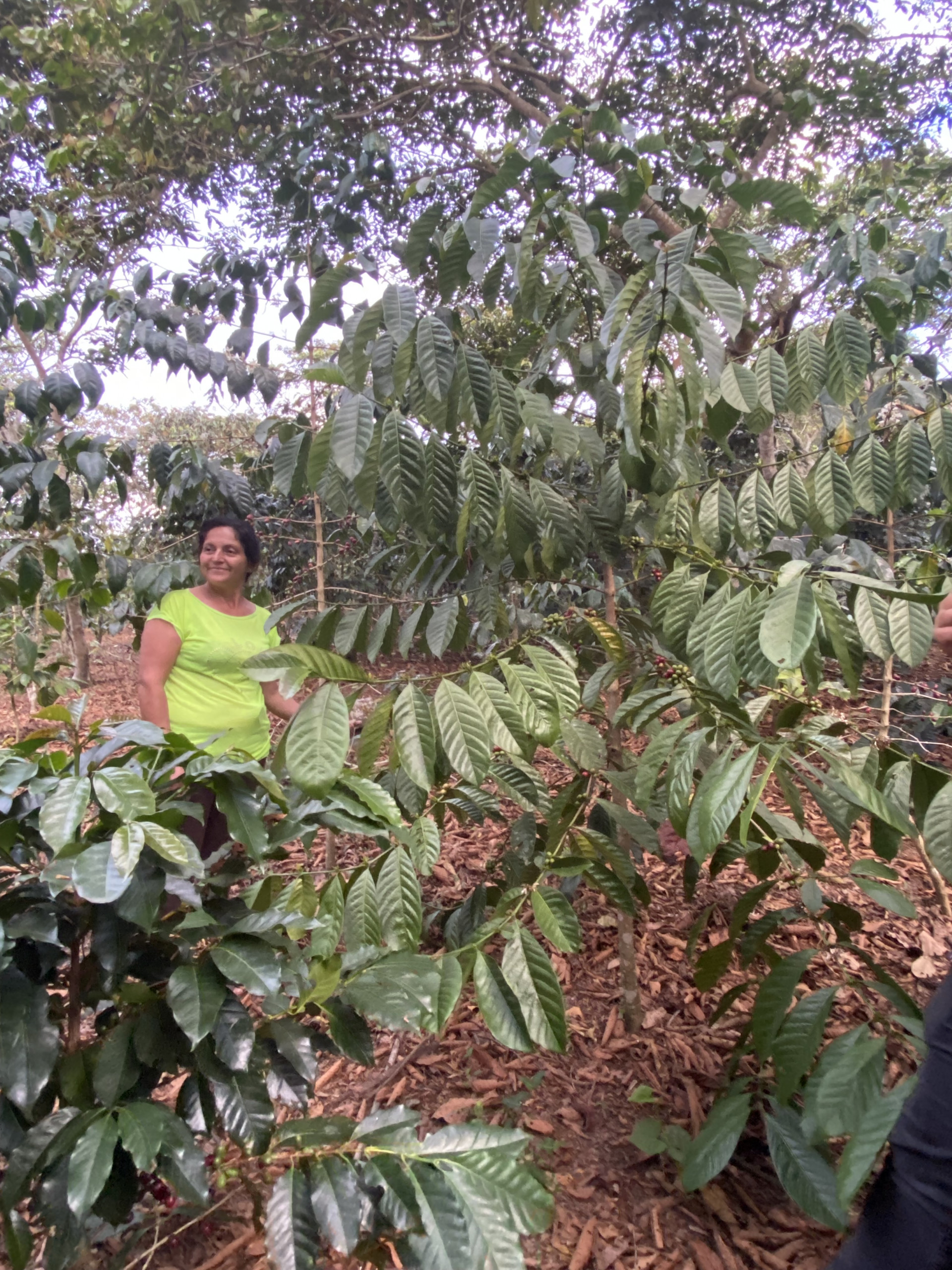 Nina Belinda on her coffee farm

Next, we visited Aprocoyce, which is also based in Mendoza. They currently have 400 members and more than 50% of which are female producers and 20% of which are young people (20-30 years old). We met General Manger, Gemner Lozano, and went straight to visit his farm, Los Laureles. He took over the farm in 2018 from his father, who first came to the farm over fifty years ago. Gemner himself is 46 and was born on the farm! Aprocoyce and its members face the same challenges as Aprysa, particularly issues with the changing weather patterns resulting from climate change. To try and combat this they are fertilising the trees as much as possible so that they are as strong as they can be to withstand any challenges the weather throws their way. Although, with the soaring cost of fertiliser they haven’t been able to do this as much as they would have liked to.

When we returned to the Aprocoyce offices, we saw their mechanical dryer. This is invaluable as the unpredictable rainfall has made drying coffee the traditional way increasingly hard. It was funded by a government scheme and is a prototype of its kind. It is powered by solar panels on the roof of the building. If it proves a success the government plan to roll machines just like it to other producing groups. 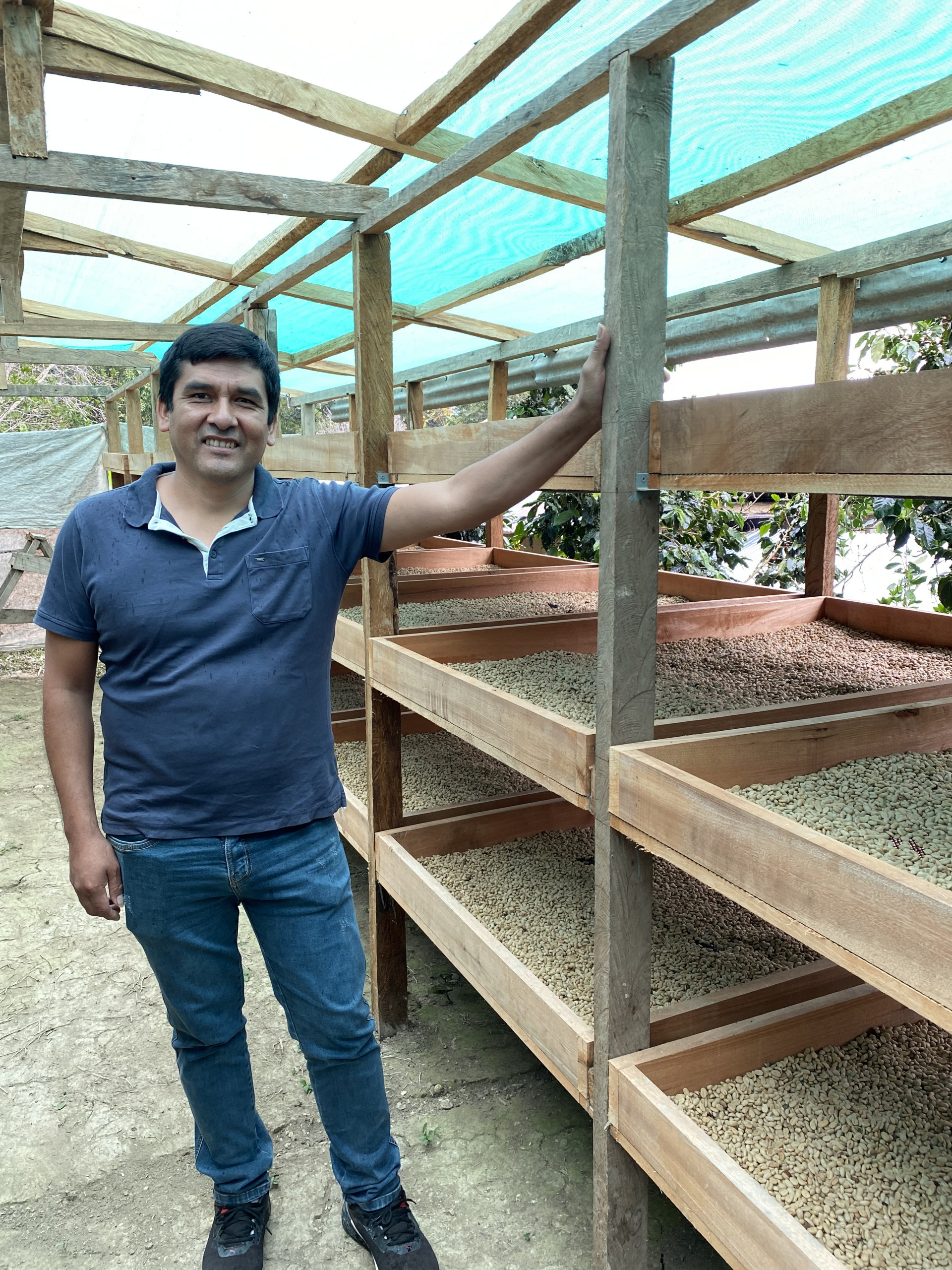 Genmer with his solar dryer

The following day we were off to Jaen, the coffee capital of Northern Peru! As the airport there has been closed for many months, we drove 7 hours from Mendoza. When we arrived in Jaen, we met up with Lenin, Javier and Cornelio, the logistics team at Sol Y Café. We went straight to their café which opened in 2019. It’s designed to be a family-friendly space, with children and families there all evening. The Frappuccinos were incredibly popular, we must have been the only people in the café not drinking them! Sol Y Café is a much larger group, with 1009 members, 70 full-time employees and a team of 7 Q graders.

The next morning we were off to the Sol Y Café site outside Jaen, where their members bring their coffee and where they have set up a school for children aged 6-12 with five grades. The school is open to the public, not just children of Sol Y Café members and employees. The school aims to help secure the future by showing the children the power of the coop and raising awareness about the environment too, most of the children who attend come from the city of Jaen and so aren’t normally exposed to the natural world. Part of the curriculum involves taking them to the plant nursery to learn about plants and how their food is grown. They are generally trying to teach in a more creative, interactive and engaging way than traditionally done in Peru 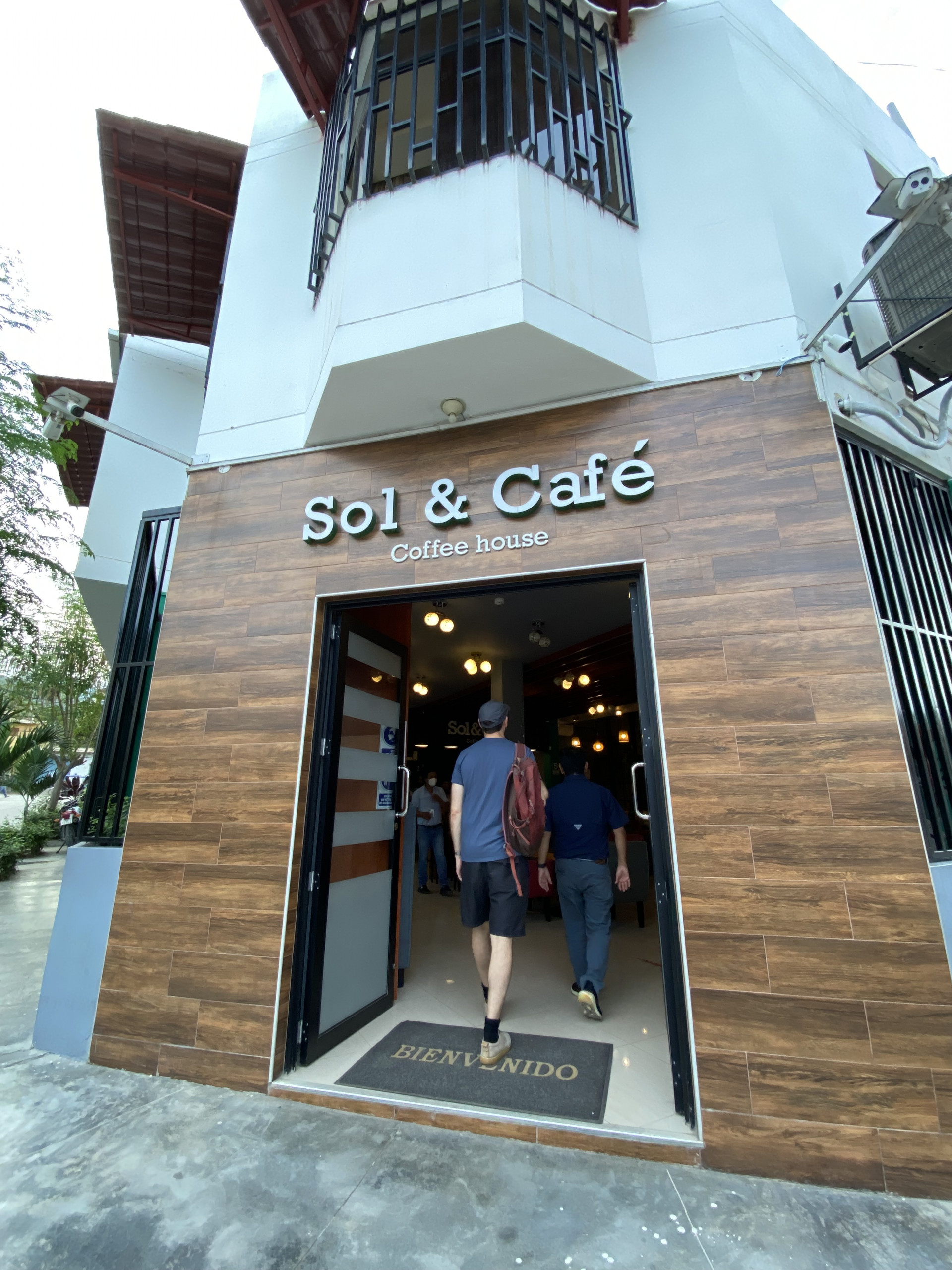 Sol Y café is all about innovation, and this is really evident at their site. On top of the plant nursery, they have a lab where their soil analyst carries out various experiments to try and find a cheaper alternative to fertiliser. Currently, his best solution is cow manure enriched with various mineral rocks, and they are rolling it out amongst their members. They also have a small farm with various small animals which they use to make their own compost. It is built very simply so its members can come and see it and recreate it easily on their own farms. 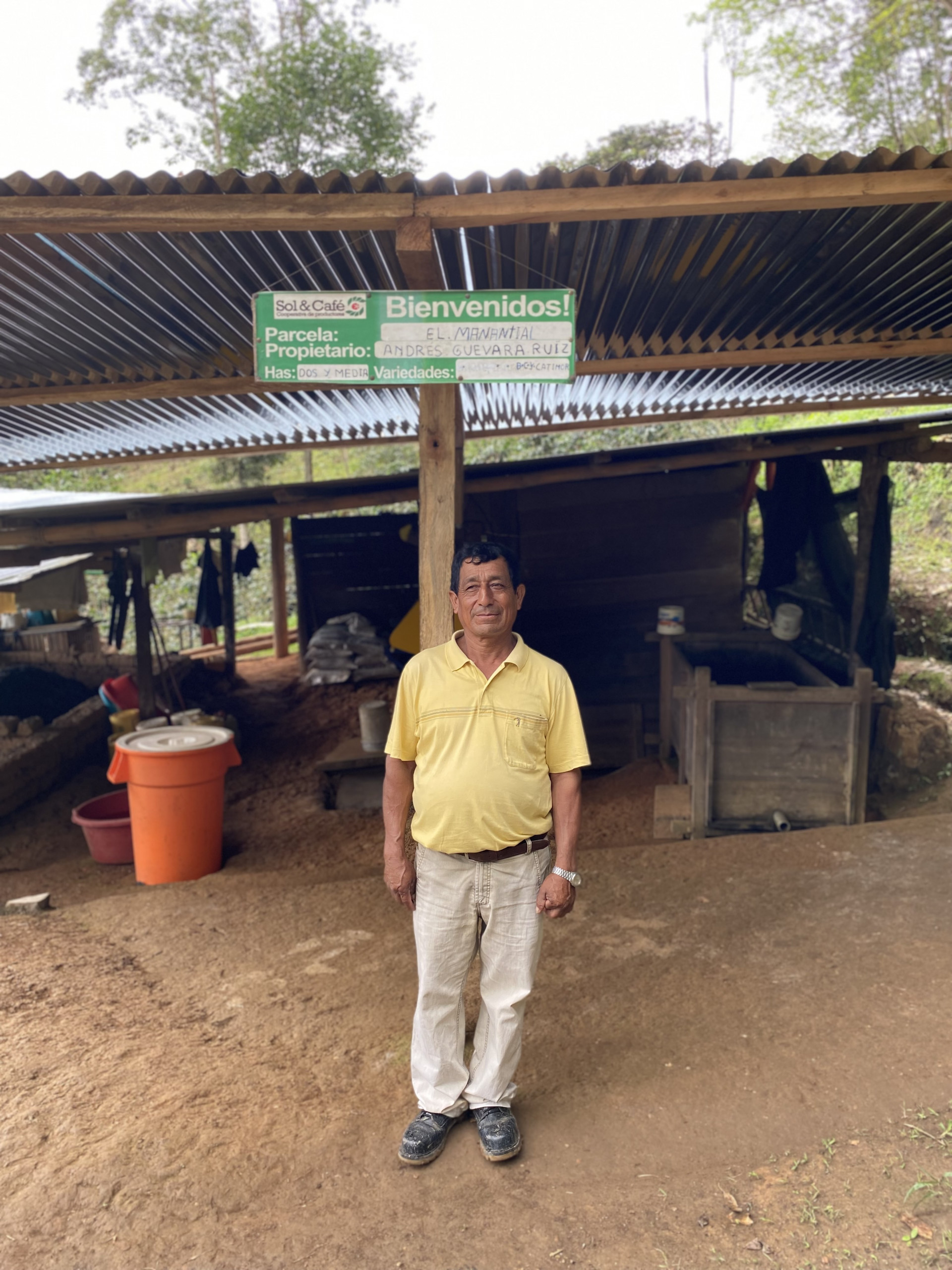 The last, but by no means least, of our partners who we visited on this trip was Frontera San Ignacio (COOPAFSI) in San Ignacio town. We drove over to San Igancio and met Luzmila and Eduvigues (the general manager) for breakfast in their café at the front of the Frontera offices. Frontera has 432 members, of which 100 are women, and 100% of their members are Fairtrade certified.

Promoting women in coffee is something Frontera is passionate about, and has made serious headway in doing, all spearheaded by Luzmila. They have their own brand of women’s coffee, called ‘Damas de San Ignacio’ which Luzmila helped to set up back in 2016. Since then attitudes to women have changed a lot, and there are now women involved in all stages of coffee production and the supply chain. Although, of course, there is still more to be done, Frontera is not shying away from this and aims to have a 50/50 split of women and men in leadership roles. We met the women’s group president within the Cooperative, Elsy, and went to visit their female members, Rosemary and Paola. 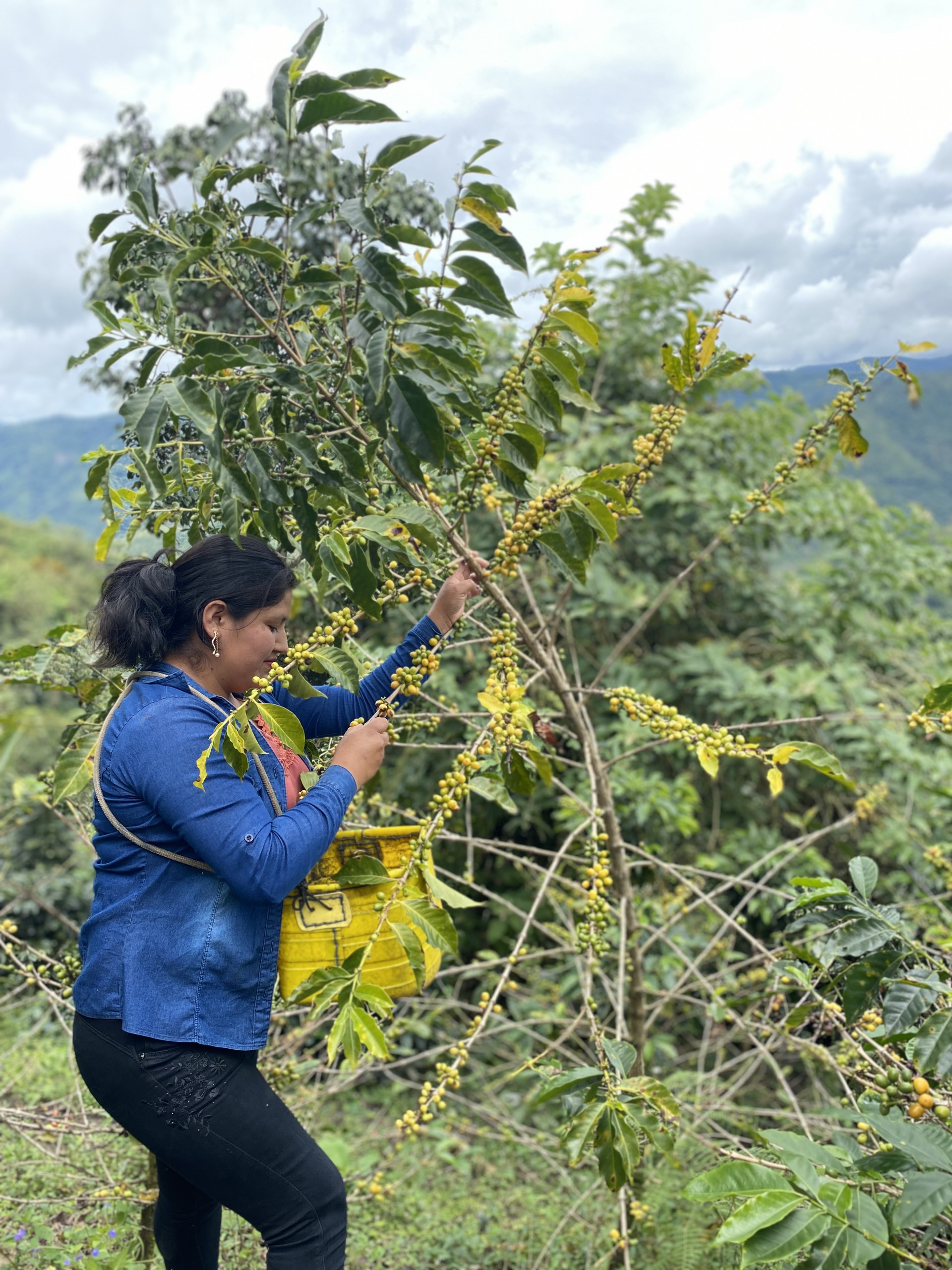 Frontera is quite unique in that they have both a wet mill in San Ignacio and a dry mill in Chiclayo. The wet mill was set up in 2010 by the previous General Manager. It mostly receives cherries but also receives washed parchment from some producers. About 30% of members use the mill. It was set up because lots of members have other professional jobs and therefore don’t have the time to process their coffee or to become experts in best practices alongside this. Getting their coffee processed here means the quality will be higher than if they were to try and rush to do it themselves. Before the opening of the wet mill, the producers who use it were getting an average cup score of 81 for their coffee, whereas now, they get an average of 83, just through better processing. This really highlights the importance of good processing and drying, and makes the wet mill invaluable to the cooperative and its members.

The final stop on our trip was the Frontera dry mill in Chiclayo, where we took a surprisingly comfortable night bus with Luzmila to, from San Ignacio. We were greeted by the General Manager, Adolfo Moreno, who has worked there for 41 years, long before Frontera bought the mill in 2008. Having this dry mill in Chiclayo is invaluable for Frontera. It means they have control over all stages of production and the best chances possible to secure shipments out of Paita, which is just a 4-5 hour drive away, which by Peruvian standards is very close! 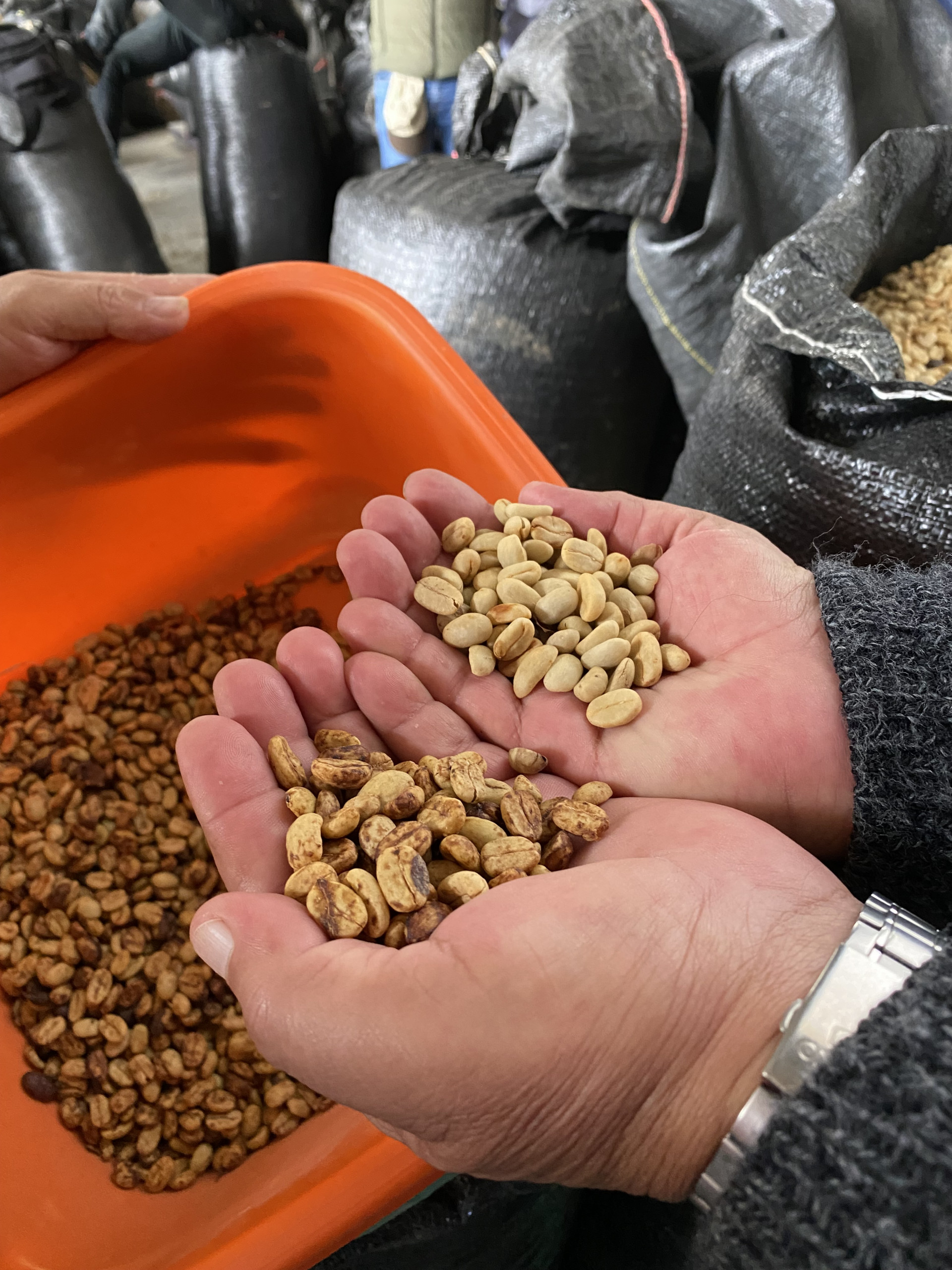 Honey and washed coffee at Frontera

After the mill, we headed to Chiclayo airport, where we said our goodbyes to Luzmila and caught a short internal flight back to Lima from where we headed back to the UK. Rounding off an incredible and very interesting trip to Peru. Reflecting on this trip, without a doubt, what struck me most was the consistent story we heard from everyone we met about the huge challenges that the already changing climate has created for people trying to grow coffee and how they are trying to mitigate it.